Christiaan Triebert is a journalist on the Visual Investigations team at The New York Times and a former staff member of Bellingcat. Kathrin Yaromich is a researcher and a former student at the University of New York in Prague, Czech Republic.

Schrödinger's Strike: Who Hit These Buildings in Raqqa, Syria?

The research was initiated by Kathrin Yaromich and conducted collaboratively with Christiaan Triebert.

The Russian Ministry of Defence accused the American-led Coalition of bombing a block of civilian buildings in Raqqa, Syria. But a year earlier, the Russians said it was them who targeted leader of the Islamic State in those exact same buildings. What’s going on here?

In April 2018, the Russian Ministry of Defence (MoD) accused the Combined Joint Task Force, better known as the United States (U.S.) led Coalition, of bombing civilian buildings in the Syrian city of Raqqa. The claim was disseminated through their official Twitter and Facebook profiles on 7 April 2018 — the day of the chemical attack in Douma — together with several aerial images reportedly showing the ”catastrophic destructions” of several apartment blocks “caused by bombing of the international coalition”. 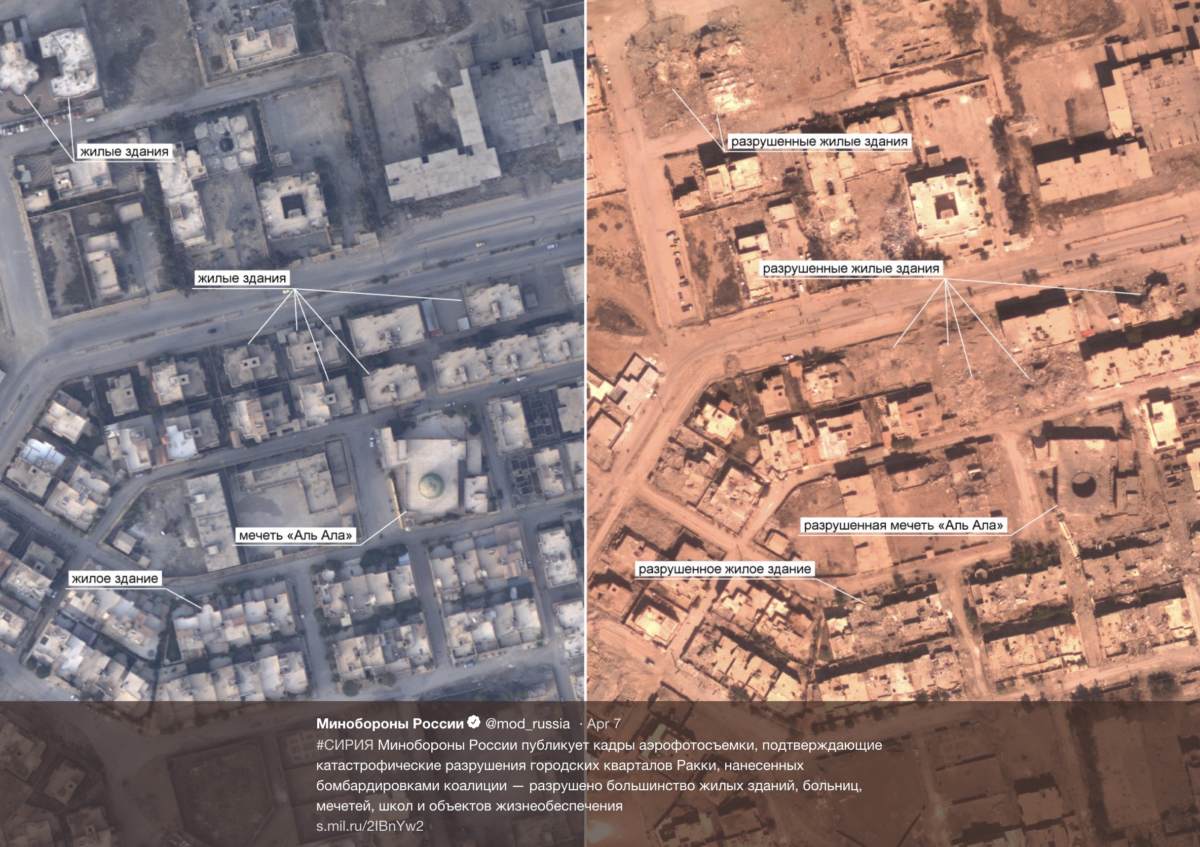 However, less than a year earlier on 16 June 2017, the Russian MoD tweeted a couple of satellite images from the exact same location. That time, however, with the claim that it was the Russian Air Force (RuAF) who bombed the buildings where leaders of the so-called Islamic State (IS) had gathered for a top-level meeting. The Russian airstrike, the MoD claimed, killed several top commanders of the group. 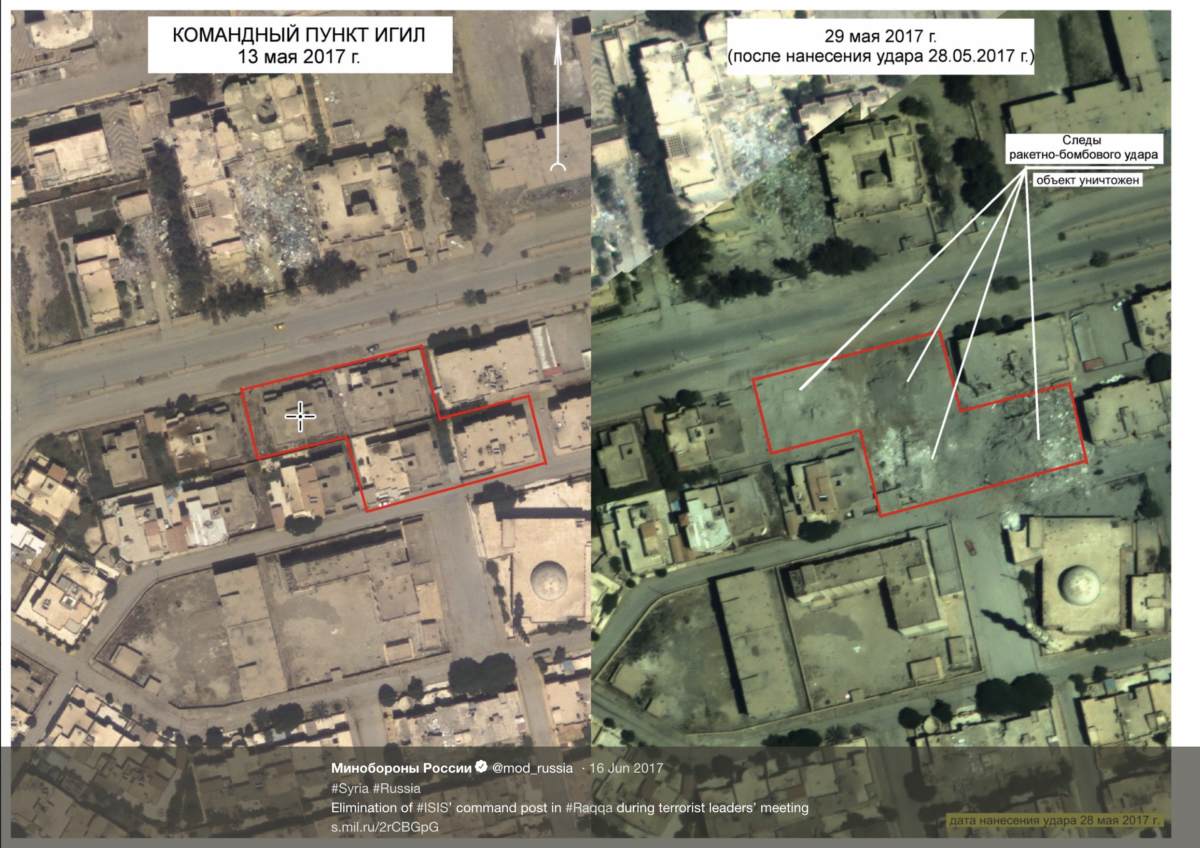 Figure 3. The satellite images showed the buildings before (13 May 2017) and after (27 May 2017) after the alleged airstrike. 16 June 2017 Russian MOD tweet in Russian, in Arabic, and in English [archived]. And also the link to the Facebook post.

One of those IS-leaders may even have been Abu Bakr al-Baghdadi, the Russian MoD claimed in a statement that same day:

According to information which is verified through various channels, the meeting was also attended by the leader of ISIS, Ibrahim Abu Bakr-al-Baghdadi, who was also killed during the airstrike.

According to the Russian MoD, other leaders of the Salafi jihadist organisation that were reportedly also killed in the strike were the emir of Raqqa known as “Abu al-Haji al-Masri”, another emir known as “Ibrahim al-Naef al-Hajj”, and the head of the group’s security named “Suleiman al-Sawah”. Figure 4. The Russian Ministry of Defence claimed they killed several leaders of the Islamic State, possibly even Abu Bakr al-Baghdadi, in a statement published on their official Facebook page.

Interestingly, the satellite images from 2017 and 2018 are from the exact same location, as the comparison below shows.

Figure 5. A composition shows that the satellite images published by the Russian Ministry of Defence in 2017 and 2018 show the exact same location in Raqqa, Syria.

This peculiar finding raises several question, which will be addressed in this article:

Where and What Are These Buildings?

It is not hard to find the exact location of the buildings, since the Russian MoD mentions the name of a mosque that was also heavily damaged. The name of that mosque is “Аль Ала” in Cyrillic, or “Al-Ala” in Latin.

That is indeed the name of the mosque shown on the photo, according to information on both Google Maps and Wikimapia. The coordinates of the buildings in question are 35.9497405, 38.9994156. It is worth noting that this is not in a “southern suburb of Raqqa”, as the Russian MoD claim, but a densely populated area west of the city centre. 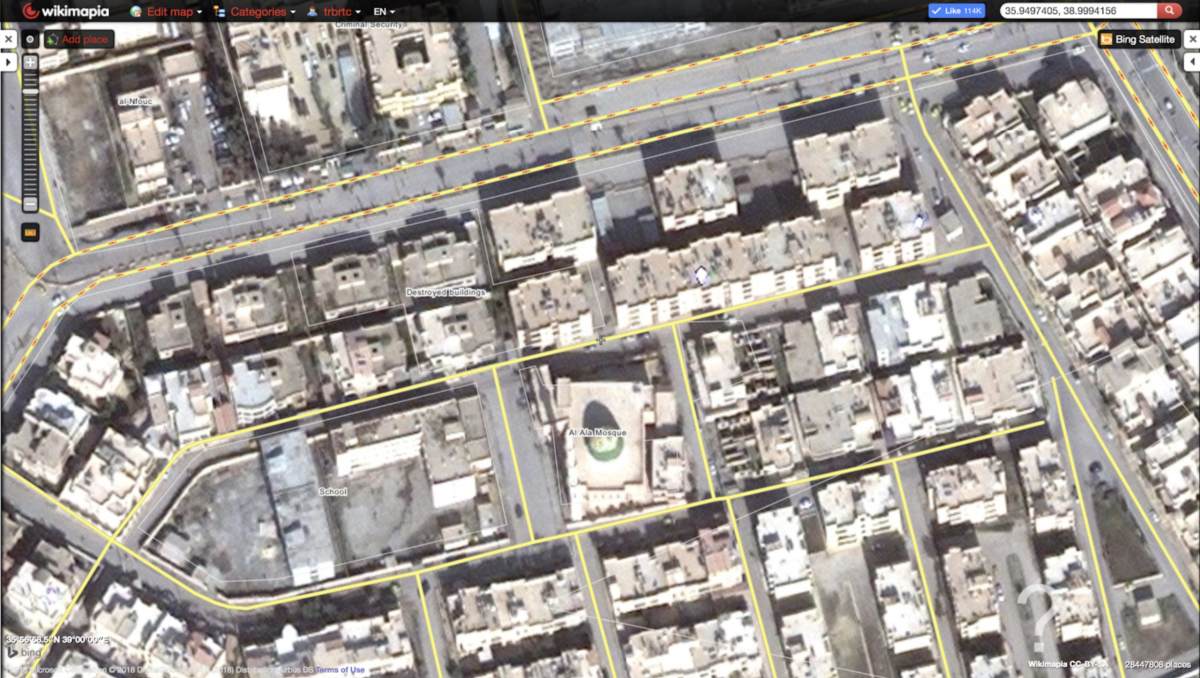 Figure 6. The Al Ala mosque as shown on Wikimapia with Bing satellite imagery.

Now that an exact location is established, it is possible to find more information about the surrounding buildings.

The mosque is indeed known as the Al-Ala mosque, which is located right next to a building that was used as a school before IS took over in the Al-Moroor neighbourhood, also known as Al-Haramiyah, according to tags on Wikimapia. No further information about the specific buildings could be found, though interior images of the mosque exist. 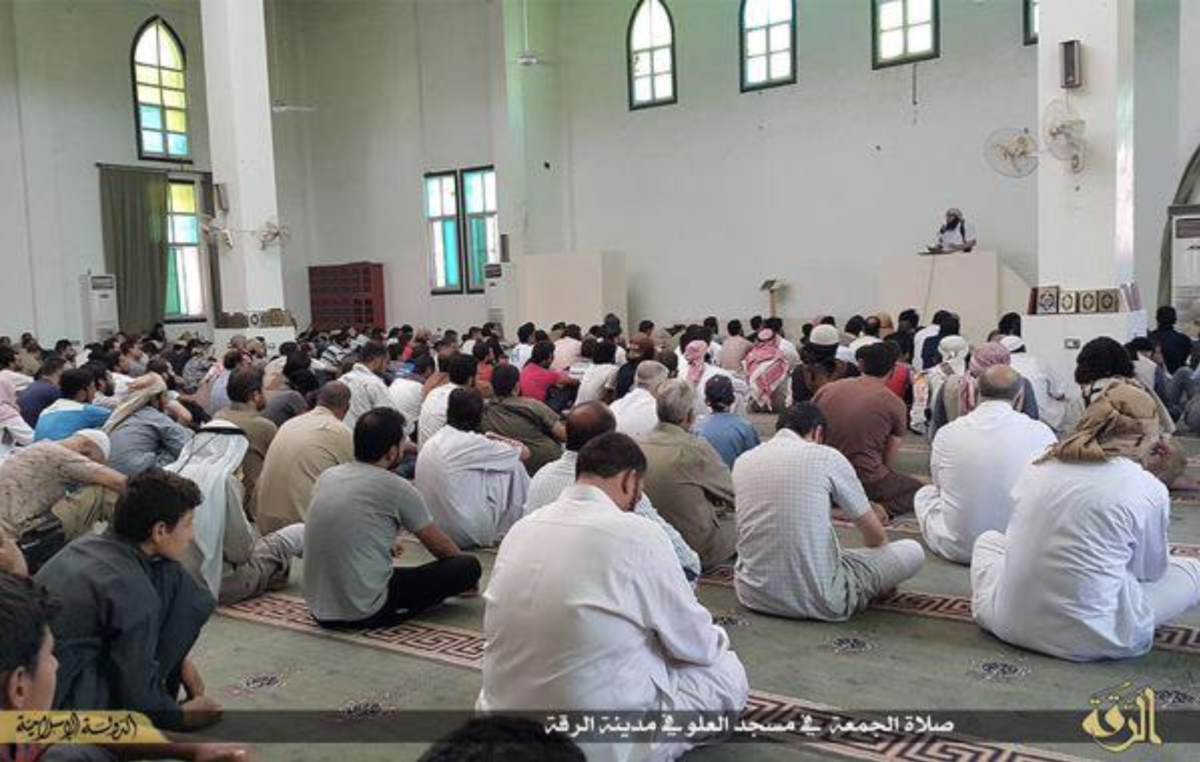 Figure 7. The interior of the Al-Ala mosque shown in a photo published in 2015.

Who Bombed These Buildings?

The Russian MoD initially claimed that they bombed the location on 28 May 2017. Commercial satellite imagery, courtesy of TerraServer/DigitalGlobe, indeed suggests that the buildings in question must have been destroyed between 24 and 30 May 2017.

However, local activists of “Raqqa Is Being Slaughtered Silently” believe that the U.S.-led Coalition and/or Kurdish militias were responsible for the damage, as the Conflict Intelligence Team found in 2017. The photos below, published on both Facebook and Twitter, are of the damage, and have been geolocated to the same site as shown in the Russian MoD satellite imagery. But, as they rightly state, “this is itself does not prove this was not a Russian airstrike”. Local sources did not mention the killing of top IS commanders were said to have been killed. Figure 8. Local activists published images of the destroyed buildings on social media. The buildings show the ground perspective of the location shown in the aerial photos of the Russian Ministry of Defence. Figure 9. Local activists published images of the destroyed buildings on social media. The buildings show the ground perspective of the location shown in the aerial photos of the Russian Ministry of Defence.

Just like the buildings, the Al-Ala mosque was partly damaged between May 24 and May 30 too, though by far not as heavy as the other buildings. Using the Arabic spelling of the mosque — مسجد العلو — it is possible to find open-source information, that sheds more light on what happened to it.

SN4HR claimed that the U.S.-led Coalition shelled the mosque on May 27, publishing a photo of a ravaged interior. That may refer to the small damage at the northeastern part of the building observed on satellite imagery, which caused the rubble in the main prayer hall. Older imagery of the mosque indeed suggests it is the same building, with identical pillars and air conditioners attached to them. Figure 10. The Al Ala mosque’s damaged interior after alleged Coalition shelling on 27 May 2017. Photo via SNHR/Raqqa Is Being Slaughtered Silently.

Further research shows that the local activists used screenshots from a video from A’maq News Agency, which functions as IS’s auxiliary media wing. The agency published a video of a damaged, but not entirely destroyed, Al-Ala mosque and its surroundings on 28 May 2017. A copy can still be found on Facebook. A copy can also found below.

It is important to note that a large part, including the dome, is still standing in the 28 May 2017 video.

Three weeks later, on 18 July 2017, another video is published by the A’maq News Agency which shows that the dome of the mosque is still intact. Figure 11. A part of the skyline of Raqqa, Syria, as shown in an A’maq News Agency video published on July 18, 2017. The dome of the mosque is still visible, suggesting it was still intact at the time.

On August 28, the Syrian Democratic Forces (known SDF), an ally of the U.S., are in control of the mosque and the surrounding area, a reports on social media claim. 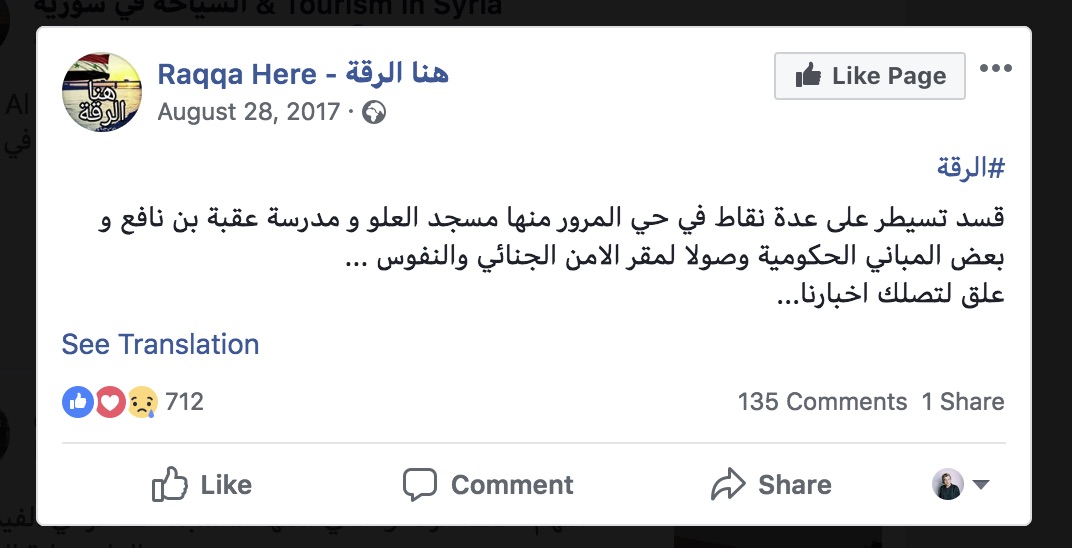 Figure 12. A post on Facebook suggests that the Syrian Democratic Forces are closing in on a neighbourhood where the mosque and the destroyed buildings are located.

Local sources on the ground thus all refer to the U.S.-led Coalition and allies, the SDF, as responsible for damage in the immediate vicinity of the buildings of interest. And while information of Liveuamap’s territorial control suggest that the SDF and their Coalition allies were closing in on the area on 25 August 2017, no conclusive statement can be made about whether it was the U.S. who bombed those buildings. Figure 13. Territorial control in Raqqa, Syria, as of 25 August 2017, according to Liveuamap. The area of interest where the buildings and the Al-Ala mosque are located is circled in red. The map shows that the area is being encircled by the Syrian Democratic Forces, supported by the U.S.-led Coalition.

With regards to Russia, less can be said. The only claim is coming from themselves. After the initial 2017 Russian MoD tweet, the CIT investigated, as mentioned before, who may have conducted the attack. They highlighted that the Russian MoD could have released a drone video of the attack to prove it was them who bombed the building, as they had claimed they observed the area before the strike happened. Releasing such information may support Russia’s MoD claim.

Bellingcat reached out to both the U.S.-led Coalition as well as the Russian Ministry of Defence, but both did not reply to our request for information. It thus remains unclear who bombed these buildings.

There have been many claims that Abu Bakr al-Baghdadi, the leader of IS, has been killed in an airstrike. The Russian MoD’s claim regarding the 28 May 2017, strike, was one of them. At the time, the Washington Post’s Louisa Loveluck told CIT that her diplomatic and expert sources said that Baghdadi had long left Raqqa in May 2017. The current whereabouts of Baghdadi are unknown, so is his fate. It is thus entirely unclear whether Baghdadi was around when the Russian MoD said they conducted the airstrike.

Airwars, an organization that monitors civilian casualty due to international airstrikes in Syria, Iraq, and Libya, lists two incidents in Raqqa on 28 May 2017, that may refer to the specific strike. However, it cannot be stated with certainty that this refers to the same incident. In general, thousands of civilians have died due to both the Coalition as well as Russian airstrikes in Syria, according to Airwars data.

Based on open-source information, it is not possible to state with certainty whether Russia or the Coalition bombed the location in question. Neither party to the conflict replied to Bellingcat’s questions sent by email. While local sources estimate the U.S. and their allies as responsible, this may be due to the general course of events: the offensive on Raqqa by the U.S.-led Coalition. However, while this may be likely, open-source evidence does not shed a light on who conducted the airstrike. There are also serious doubts to cast on the statement that Baghdadi was killed in the alleged airstrike.

What is clear, however, is that the Russian MoD has used satellite imagery of the exact same buildings for two contradicting statements: in 2017, they claimed they targeted an IS meeting, and in 2018, they claimed that the U.S. bombed civilian buildings.

Editorial note (8 December 2021): This byline has been updated to reflect the actual name of the co-author Kathrin Yaromich. At the time of publication it was decided, in keeping with standards and best practices, to use the pseudonym ‘Jeanne Sanya’ for Yaromich for ethical and security reasons.

Special thanks to Bellingcat members Klement Anders and Aric Toler for feedback. The Battle for Mosul: A View from Space before the Operation