On March 16, 2018, at around 21:00 local time (UTC+2), an alleged Turkish airstrike hit the main hospital of the Kurdish-majority city of Afrin, in northwestern Syria, where Turkey and allied Free Syrian Army (FSA) groups are engaging in an offensive against the People’s Protection Units (Kurdish: Yekîneyên Parastina Gel, YPG).

The YPG and the Syrian Observatory for Human Rights, among others, claimed the Turkish airstrike killed over a dozen non-combatants. This claim echoed in the reporting of international news agencies such as Reuters and Agence France-Presse (AFP), through which the allegation found its way to international and national media.

The following morning, at around 11:30, the Turkish Armed Forces (Turkish: Türk Silahlı Kuvvetleri, TSK) released drone footage, via their official Twitter and YouTube accounts, denying that they had struck the hospital, as “the PKK/KCK/PYD-YPG and ISIS terror organisations claim”. (It is worth noting that there is no known Islamic State (IS/ISIS) presence in Afrin nor was there a claim of the group mentioning the hospital in Afrin.) 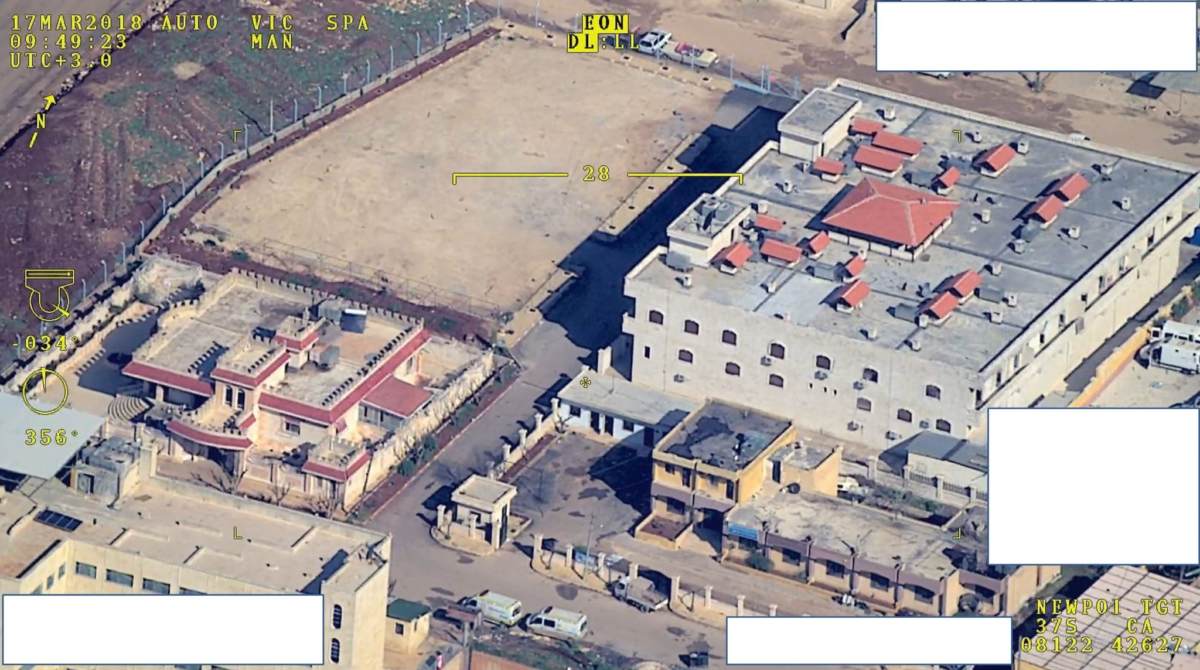 Footage captured by a Turkish Armed Forces drone shows what they claim to be Afrin’s general hospital at 9:49 on March 17, 2018. 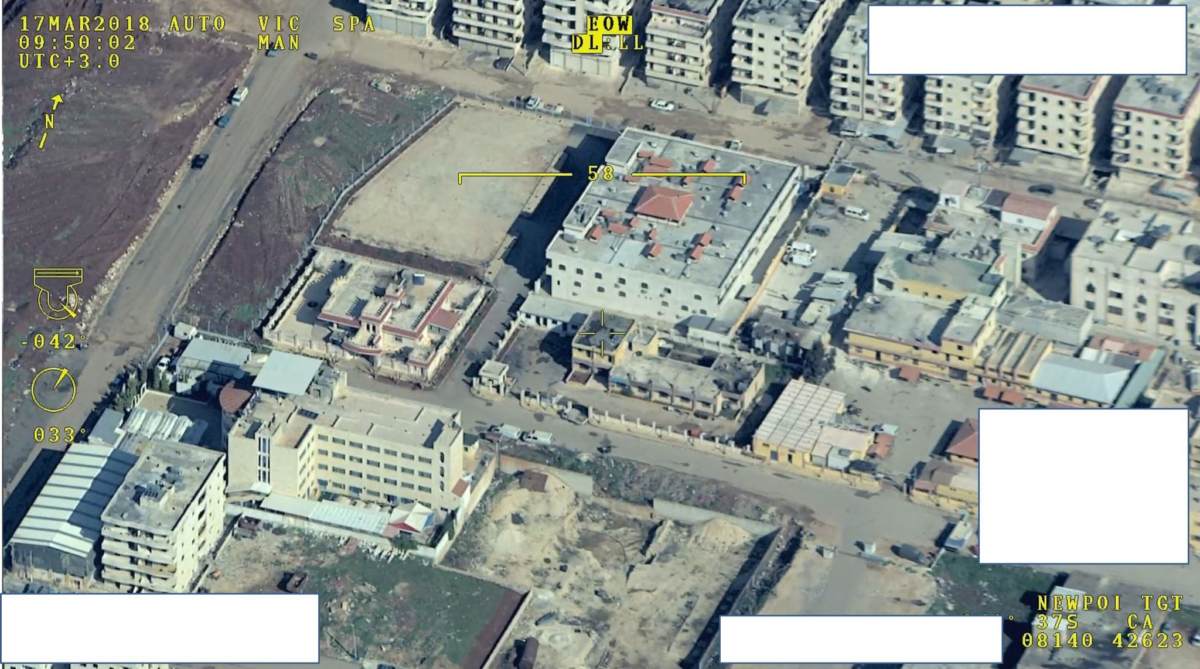 Footage captured by a Turkish Armed Forces drone shows what they claim to be Afrin’s general hospital at 9:50 on March 17, 2018.

This investigation seeks to establish:

Using open source information, such as photos and videos from social media, as well as satellite imagery, we are analysing the incident before and after the alleged Turkish strike below.

Which building(s) constitute the Afrin hospital?

First of all, the exact geographic location of the Afrin hospital needs to be established. This can be done either through specific information about the location shared by the YPG, or by geolocating images from the alleged bombing — after first verifying with a reverse image or video still search whether they are new.

The hospital is “Afrin’s general hospital […] the only big hospital”, according to Rojhat Roj, a YPG press officer who was cited by Reuters. In Kurdish, it is spelled as “Naxweşxaneya Afrin”. It had a staff of around 250 doctors and nurses, Jiwan Mohamed, the director of the hospital told Voice of America in February this year. There are four other health facilities in the district centre, according to the United Nations (UN), one of which is operated by a UN partner.

There is plenty of open source footage of what is said to be the hospital in Afrin, many of which show a yellow building with red stripes, as visible on the right hand side of the most zoomed out drone image published by the TSK. Other visual clues that indicate that it is the hospital, are apparent in photographs and videos of the hospital, such as the windows and the air conditioners.

The hospital’s Facebook page, for instance, has several photos that show the yellow building as a part of the hospital complex, e.g. from October 31, 2017 and April 29, 2017. A photo of the southern entrance of Afrin’s general hospital, posted on the hospital’s Facebook page on October 31, 2017.

The writing next to the door reads “قسم الطبقى” and then a word which is obstructed, though probably “المحوري”, which would translate as radiology department. The opening of that apartment in Afrin’s general hospital was covered by the Syrian  Kurdish Vedeng News in May 2016.

Detail from a photo published on Afrin’s general hospital’s Facebook page on October 31, 2017. The text refers to the radiology section of the hospital.

Various media have documented Afrin’s general hospital as well. Rudaw, for example, published a video of the hospital on January 28. The yellow building with red stripes can clearly be identified, and the larger white building is seen in the background. Still from a Rudaw reportage of Afrin’s general hospital. The southern entrance can be seen on the footage, as well as an ambulance on the hospital’s premises.

What is the use of the larger white building?

Interestingly, the TSK video footage is focused on a large, two-storey white building — a building not identified as the hospital in open source footage. The wider area is only visible in one of the two photos published on Twitter. This conveys the message that the large white building is the Afrin hospital, while open source images suggest it is in fact the yellow building complex. So what is the use of the larger white building?

In a recent article by Marcel van den Berg on the attack, the building is desrcibed as a printing house, and  according to Firat News Agency, the building is known as the “Arîn Printing House”.

While initially serving a different purpose than health services, the larger white building started being used by the hospital, Mr Van den Berg was told by a local source:

“After attacks and increasing number of wounded people the Avrin Hospital was too  small to accomodate the wounded people so the hospital started to use the white building next to it for patients as well.”

It is unclear when exactly this was, but it is safe to assume that this must have happened since the start of the joint Turkish and Turkish-backed FSA Operation “Olive Branch”.

Was the hospital damaged?

Turkey denied it had struck the hospital, publishing the drone footage. Some media claimed there was indeed “no visible damage” (The Telegraph) or an “undamaged hospital” (Al Jazeera English).

However, this is not true. Damage at the hospital is visible in the right edge of the video, as well as in one of the stills: a crater in a yellow building with red stripes directly east of the larger white building. The coordinates of the crater are 36.510004, 36.858014.

Satellite imagery, courtesy of DigitalGlobe, captured on February 23, does not show the damage. This indicates that the hole must have appeared between February 23 and March 16.

Further analysis of footage after the alleged strike shows that there is more damage at the Afrin hospital. This damage is not visible in the TSK drone footage, as the hospital building obscures the area damaged.

Photos published by Hawar News Agency, an online Syrian Kurdish news agency linked to the Syrian Democratic Forces (SDF), were taken from the northern side of the hospital complex, pointing south.

A panorama image composed of four photos published by Hawar News Agency showing the damaged northern side of the Afrin general hospital.

This area is obscured by buildings in the Turkish drone footage. There is also a video filmed from the same area. A male, likely to be the filmer, can be heard saying “As you can see, they [TSK] striked the hospital of Afrin.” He claims to be filming this on March 17.

The source of the video is unknown, but spread through messenger services before it ended up on Twitter. The location is the time, and the video was filmed around 13:00 and 14:00 local time, based on the direction of the shadows.

The approximate position of the filmer can be seen in a video filmed inside the hospital by Kurdistan24 on February 11. This entrance to the hospital may be the main emergency entrance. ANF also interviewed a nurse at this same northern entrance area, as is visible on a video published on March 16 before the airstrike. 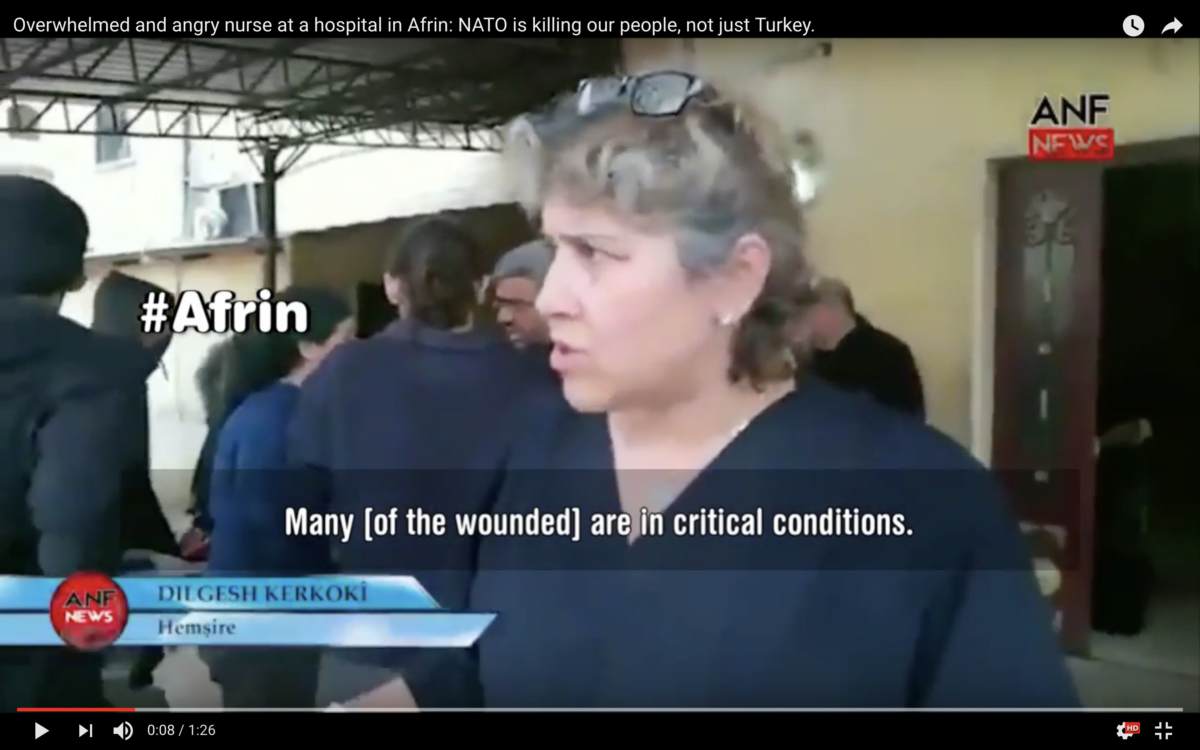 Aid workers rushing into the same entrance can also be seen in Ruptly footage from January 24 and March 4.

Ambulances on the premises of the Afrin hospital are also clearly visible on the TSK’s drone footage. The parking lot for the ambulances are within the hospital compound and clearly divided by a wall from the larger white building. These are also visible on footage published by German broadcaster ZDF. It is worth noting that the position of the vehicles is identical.

Two damaged ambulances are visible on both ground footage (left, courtesy ZDF) and from the air (right, courtesy TSK).

At least two impact sites can be identified: one small hole in the roof with a missing wall at the top floor, and larger destruction at the northern entrance of Afrin’s general hospital. It is not possible to determine the cause of the destruction, as no footage has emerged showing possible weapon remnants or anything else that indicates the exact type of munition used.

Inside of the hospital, severe damage can be observed as well, for example in the ZDF footage published.

We cannot find any traces of weapon remnants on the footage. While we have reached out to Afrin inhabitants, they were not able to visit the general hospital; Afrin was captured by TSK and Turkish-backed FSA just over a day later.

Were there civilian casualties?

The difference in civilian casualty estimates can be due to a variety of reasons, such as deaths that were reported only a day later, or wounded that later died because of their injuries. No names of the people that allegedly died due to the strike have been found, but this may also be due to the sudden take-over of the TSK and allied FSA groups of Afrin. Please do contact us (contact@bellingcat.com) if you happen to have more information about the reported civilian casualties.

Some Twitter-users pointed out that the hospital does not look like a recently constructed hospital in Afrin. This is correct, since this is a different hospital which opened in November 2017. As Mr Van den Berg already noted, Turkish daily conservative newspaper Yeni Şafak claimed that hospital was only used for wounded fighters, not civilians.

At first glance, there are some similarities with the new hospital and the larger white building (the reported printing house). However, close examination and geolocation shows that this is a different building in a different part of Afrin city. 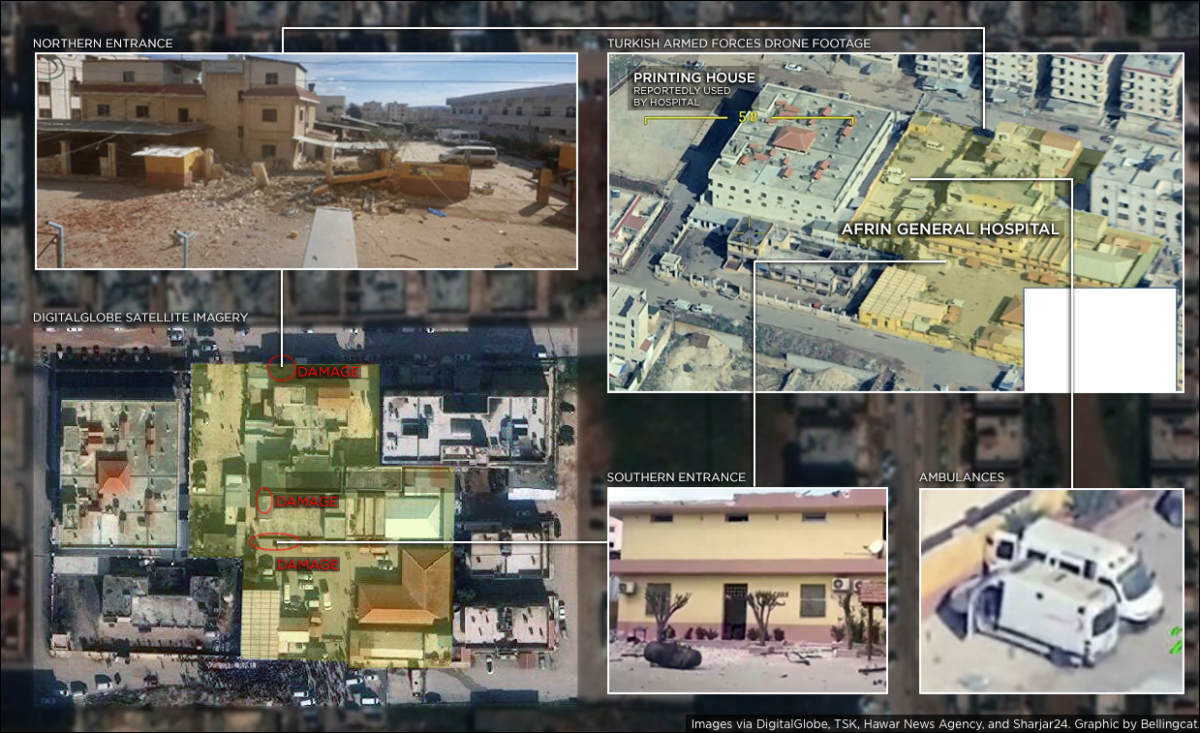 The general hospital of Afrin was damaged somewhere before or on March 16, 2018. It is clear that Afrin’s general hospital suffered damage. It is visible on both ground-perspective footage from local media and activists, as well as on drone footage published by the Turkish Armed Forces. At least two impact sites can be identified. We are not able to confirm what caused the damage, or the number of dead and injured. The footage published by the Turkish Armed Forces, which they used to deny involvement, focuses on a building that does not appear to be anything related to the hospital. However, the drone imagery was also the first public document of the damage done the yellow building — which turned out to be the hospital. There does not appear to be any indication from open sources that the hospital would be a legitimate military target.