In April 2017 25 hospitals or medical facilities in Syria were attacked: an average of one attack every 29 hours. 91% have been independently found to be carried out by Syrian government or Russian forces. Many of those targeted were located in Idlib, the largest remaining opposition controlled city after 2016’s siege in Aleppo left thousands displaced – the majority went to Idlib or to the Aleppo countryside.

Information published in this joint report suggests that in April 2017 Syrian and Russian armed forces were responsible for the eight attacks on Syrian hospitals and healthcare centers – facilities serving a combined 1.3 million people (a beneficiary group larger than the population of Brussels), as reported in witness statements as well as by the managers of those medical facilities. 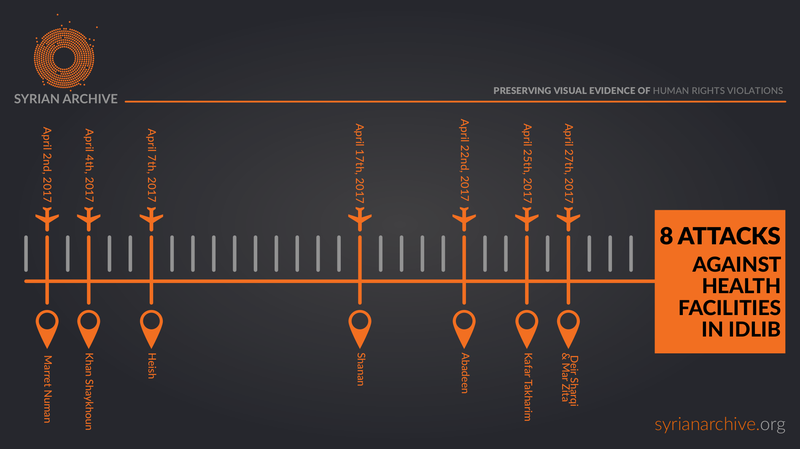 The Syrian Archive and its partners (Syrians for Truth and Justice, Justice for Life and Bellingcat) analysed and verified this pattern of attacks by cross referencing a combination of open-source visual content, flight observation data, and witness statements. Findings regarding these attacks were characterized by repeated bombardments, lack of warnings, and an absence of active military hostilities in the vicinity of the attack. Through collecting, verifying and reporting investigative findings from these incidents, the authors hopes to preserve critical information that may be used for advocacy purposes or as evidence in future proceedings seeking legal accountability.

This report complements and supports recent efforts by human rights organisations to report violations targeting medical facilities in Idlib in April 2017. Those efforts include:

The added value of this report to the efforts mentioned above includes damage identification, as well as cross referencing and contextualising visual content (75 verified videos) with witness statements (14 people) and with flight observation data (6343 observations) provided by a spotter organisation of aircraft in the immediate vicinity of hospitals at the time of attacks. Geolocation of visual content was done in collaboration with the Bellingcat Investigation Team.

Prior to publication, consent was acquired with those interviewed (e.g. medical workers, facility managers, and Civil Defense volunteers) regarding the public sharing of information regarding attacks.

Link to the full report