On Feb. 1, 2017, the United States led Coalition was accused by local activists and journalists that it had bombed the headquarters of the Syrian Arab Red Crescent (SARC) located in the Carlton Hotel in the city of Idlib, Syria. Photos and videos allegedly showing the bombed headquarters quickly emerged online. This open source investigation aims to verify the various claims made surrounding this incident.

Based on open source research, it can be confirmed that the Syrian Arab Red Crescent (SARC) utilised the Carlton Hotel in Idlib city as a headquarters. It can also be confirmed that the Carlton Hotel was recently severely damaged. The US-led Coalition was accused of conducting an airstrike on the building in the early morning of Feb. 1, killing one SARC member, but the Coalition denies any involvement. Neither the exact date of the attack nor the perpetrator can be established based on open sources. What can be observed, however, is that a bomb appears to have pierced at least four floors before detonating.

The following claims are circulating on social media:

This open source investigation aims to verify those claims by answering the following questions:

The investigation uses only openly available sources on the Internet. In addition, a request to comment on this incident and the accusation was sent to the Coalition’s public affairs office.

Sources were found by, for example, searches on social media using certain keywords of internet. One can think of a search on ‘Red Crescent Idlib’ in Arabic: “الهلال الأحمرادلب‎‎”. These social media include Facebook, YouTube, Twitter, and Instagram. After the exact location of the incident was found, the coordinates have been used to conduct location-based searches in a 2-km radius on those same social networks. Reference photos have been found via geotagged pictures on Panoramio. All YouTube videos have been checked for the date and potential other, earlier uploads using Amnesty International’s YouTube Data Viewer, and images Google’s reverse image search has been used to see if the photos were not posted before the date of the attack. Bellingcat has published several how-to guides to for beginning or advanced open source investigations. All sources but one has geolocated.

These are the main open sources found and used outside of the use of freely available mapping data and satellite imagery via Wikimapia, Google Earth, Google Maps, and Bing Maps. Pro-opposition media, local activists and organisations have shared videos and photos showing the same severely damaged building, and large number of them accuse the Coalition for conducting the airstrikes:

Al-Baladi News also published a video showing SARC employees in a ravaged building [link/archived], and Al Jazeera Arabic also sent a reporter to the scene who said it is not clear who conducted the airstrike [link/archived].

1. Is there a Carlton Hotel in Idlib city?

Yes, based on open sources it can be confirmed that there is a Carlton Hotel in Idlib city.

First of all, the hotel (Arabic: فندق كارلتون) is listed as a four-star hotel on hotel booking websites (for example, hotelscombined.com [archived]) and Google Maps [archived]. Secondly, the hotel is referred to in media, for example by esyria.net [archived] and dp-news.com [archived]. The articles are an interview with the hotel director and a news report that the hotel closed its restaurant in 2011, respectively.

Thirdly, photos that are geotagged on Panoramio, or that can be geolocated to the area, indeed show a building which bears a sign ‘Carlton Hotel’, including a logo and four stars.

The Carlton Hotel in Idlib in 2011, a photo taken by Riad Zakour and uploaded to Panoramio. [link/archived].

2. Was the Carlton Hotel in Idlib was used by the SARC as a headquarters?

Yes, based on open sources it can be confirmed that the SARC used the Carlton Hotel in Idlib as a headquarters. 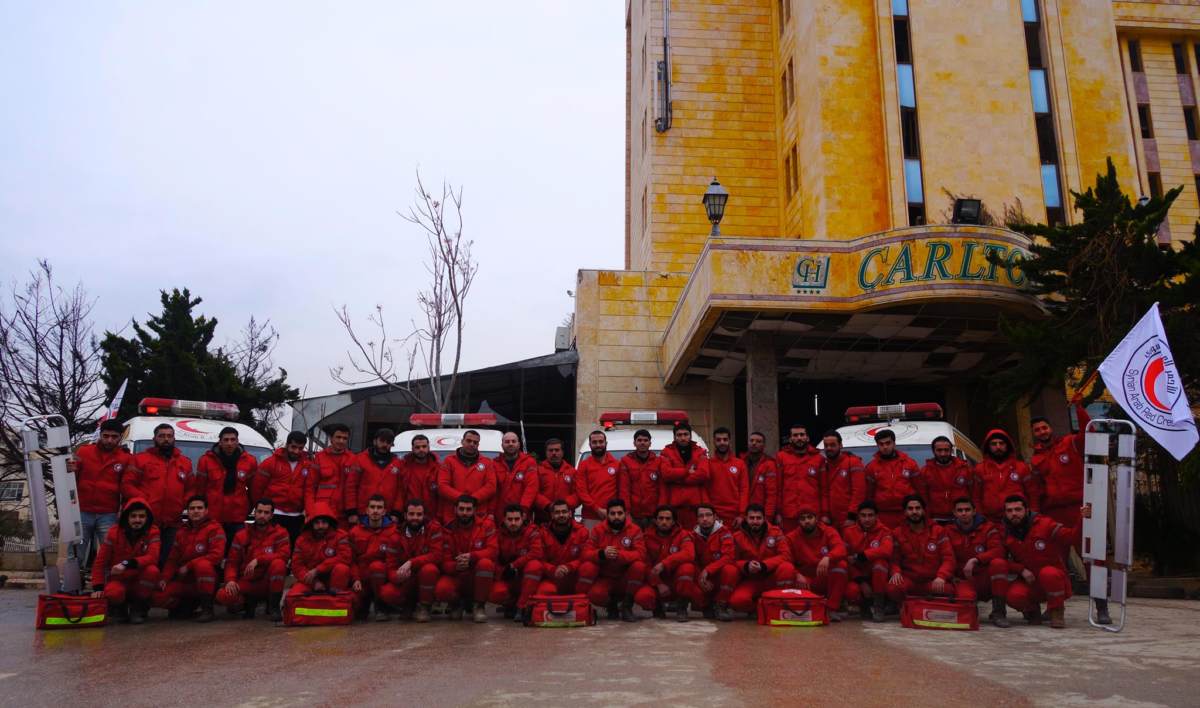 Members of the SARC Idlib branch pose with four ambulances in front of the Carlton Hotel. The picture was uploaded by their Facebook page on Jan. 17, 2017. [link/archived]

On Feb. 4, 2017, the local SARC branch published a statement with regards to the alleged attack, which condemns and denounces the aircraft that “directly” targeted their headquarters at 3:30 in the morning on Feb. 1, 2017. The local SARC branch had to stop their work due to the attack, as a part of the building was destroyed, another part may collapse, while other parts of the building suffered from burning. They call for “all stakeholders to investigate this incident”, according to the statement. It further says that the building was marked on the roof as being a SARC building. 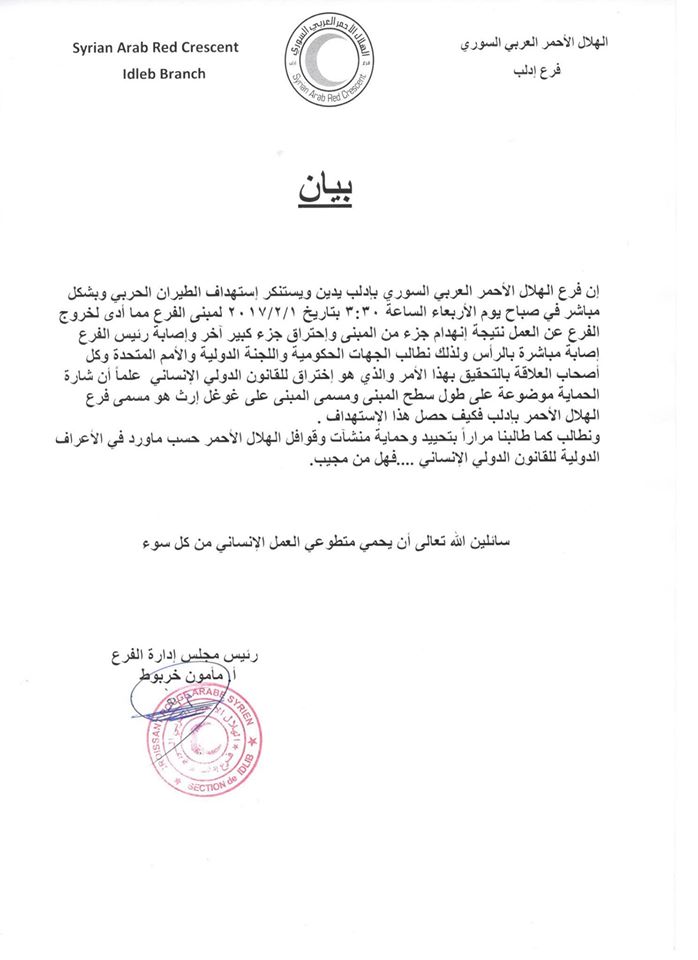 Statement published by SARC denouncing the alleged attack on their headquarters in Idlib city. The statement was published on Feb. 4, 2017.

Secondly, the official Twitter account of the delegation of the International Committee of the Red Cross in Syria condemned the bombing, “a clear violation of [international humanitarian law”, hours after the attacked reportedly happened. This tweet thus suggests that the ICRC Syria is aware that there is an aid branch operating in the destroyed location, which brings us to the next point: Was the Carlton Hotel in Idlib indeed bombed?

3. Was the Carlton Hotel in Idlib was bombed? If so, was it bombed by the US-led Coalition?

Based on open sources, it can be established that the west wing of the Carlton Hotel has been severely damaged. Below are photos and screengrabs from videos showing that damage. 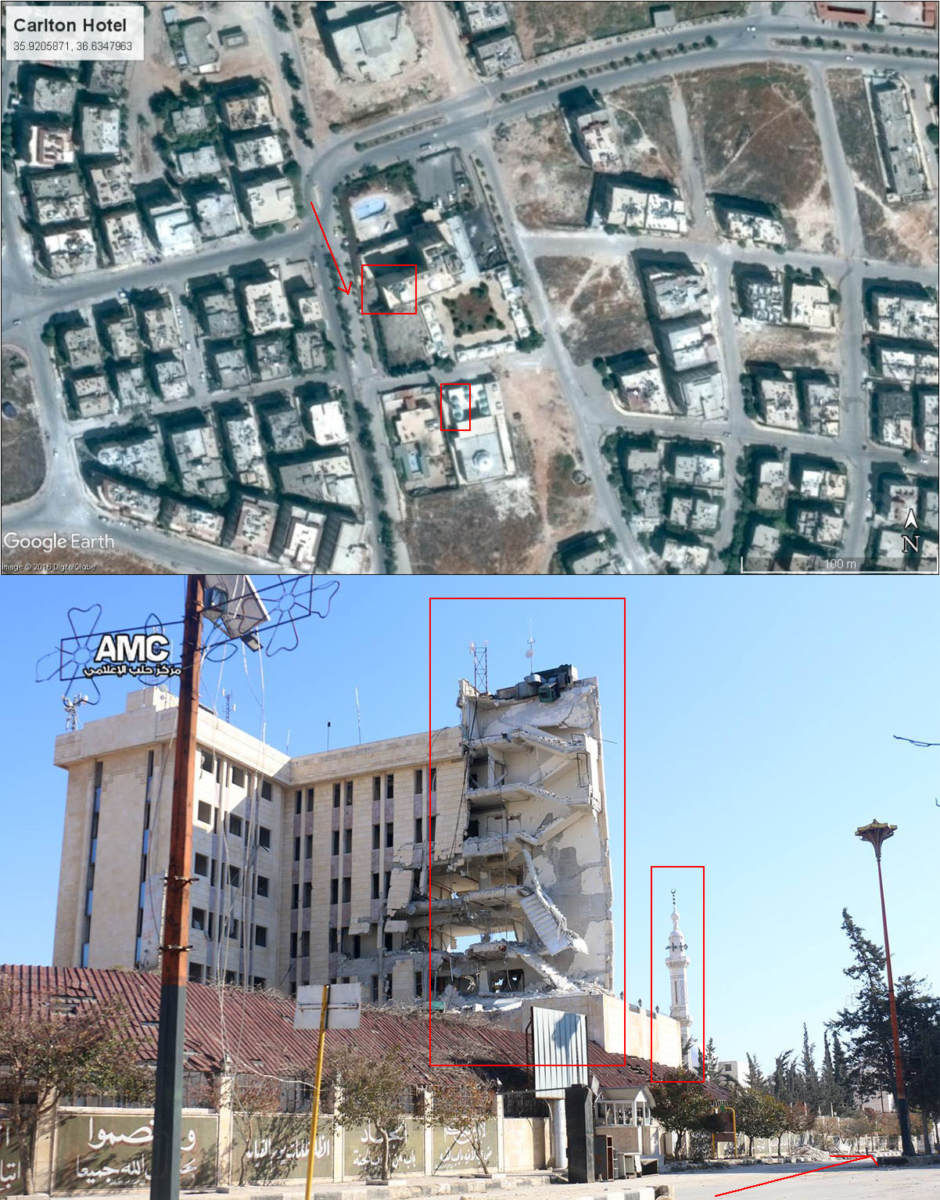 All footage taken outside of the building can be geolocated to the immediate surrounding of the Carlton Hotel. The map below shows all locations from where photos or videos of the ravaged hotel were taken.

In a news report [archived], MICRO SYRIA claims that the Carlton Hotel, which houses the Red Crescent, was targeted by unknown aircraft at three ‘o clock at night of February 1, 2017. A reconnaissance aircraft was seen in the sky an hour before the airstrike happened, media activist Ammar al-Adalba told Website for the Syrian Revolution. He said that it was most likely an airplane from the Coalition that struck the SARC headquarters, resulting in destruction and fire inside the building.

As there is no (open or commercial) satellite imagery available around the date of the alleged strike, the exact date of the destruction cannot be confirmed.

There are no obvious visual indicators, like weapon remnants, that could identify the perpetrator of the attack, or the cause of the damage. There is, however, footage of an object that appears to have pierced at least four floors of the building.

A rescue worker interviewed by Step News Agency claims that “a missile went from the roof down to the first floor.” Some have suggested the damage at the Carlton Hotel may be due to a delay-action bomb, which is designed to explode some time after impact (think of a bunker buster, for example). Building upon that claim, it has been suggested that it must have been either the Coalition or the Russian Air Force that conducted the bombing; the Syrian Arab Air Force (SyAAF) is believed to be incapable of delivering such bombs during night time. However, as Tom Cooper detailed in this War Is Boring piece, may well have the capacity to operate at night.

There is currently no visual evidence to confirm the use of a delay-action bomb, so the above remains speculation.

In reply to a request of information, the Coalition’s public affairs office e-mailed Bellingcat that “the Coalition did not conduct airstrikes in Idlib on Feb. 1, 2017.”

With regards to injuries and casualties, the estimates by the local sources range from nine to eleven individuals that were injured.

At least one ambulance has also been severely damaged in the incident, photos and videos show. 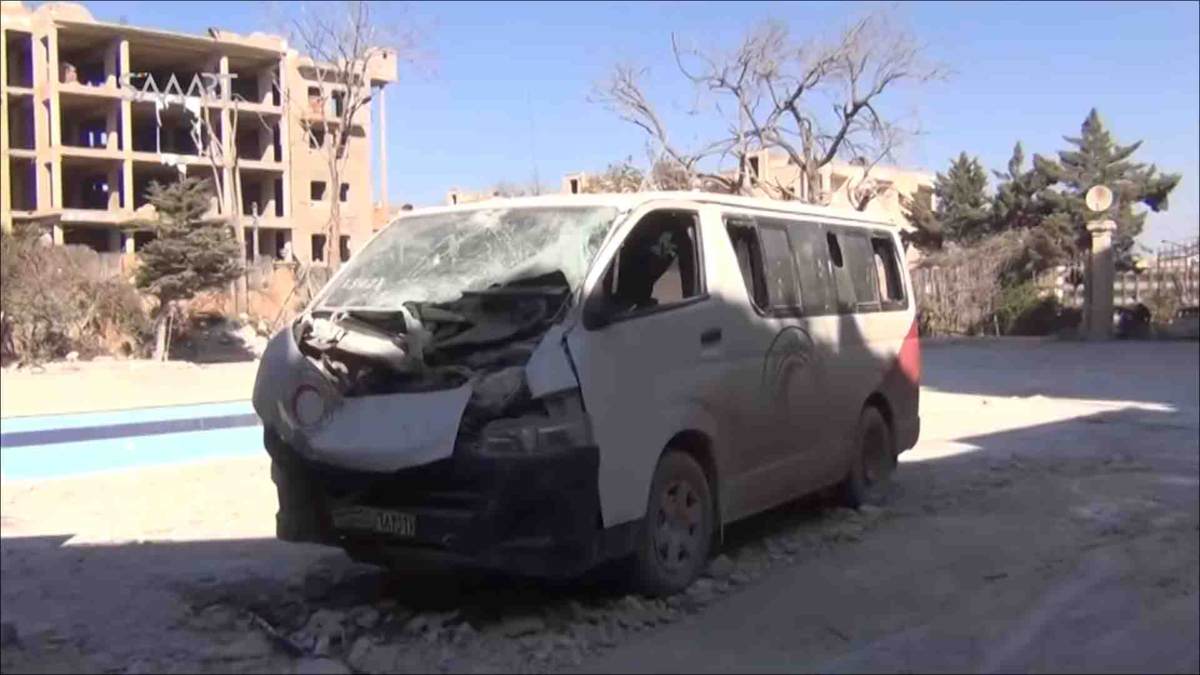 A damaged ambulance on the premises of the Carlton Hotel in Idlib, Syria. Still from a video published by SMART News Agency. [link] 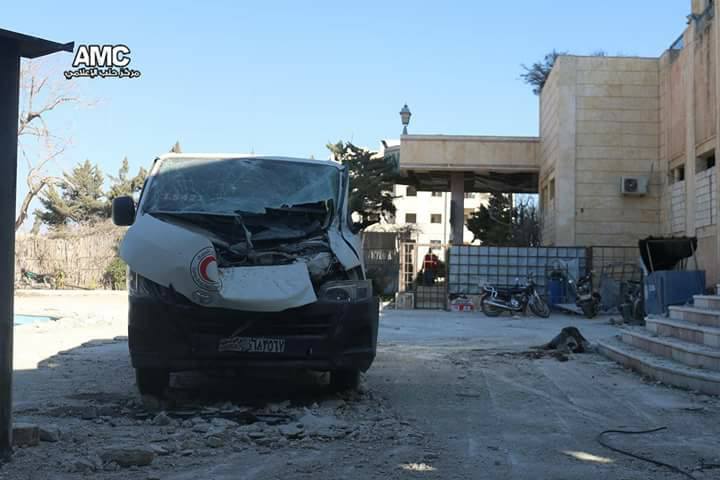 The same ambulance shown on a photo published by Aleppo Media Center.

Update: In a previous version, the article stated that an e-mail was sent to US Central Command. This is not correct, the e-mail was sent to the US-led Coalition. The reply came from the Coalition’s press desk, which is was an e-mail-address associated with the US military.