On August 17, 2016 reports of an airstrike targeted Al-Qaterji district in Aleppo city began appearing online. This included reports from local news agency and video footage showing the damaged area, such as the below video that was taken by Aleppo Media Center moments after the attack. It shows two people who say that they heard aircraft before the attack.

Another video from Orient YouTube channel showing a rescuer from the white helmets team also stating that the area was hit by an airstrike. He mentioned 6 casualties and many injured as a result of it.

The reports also included a photo of little boy called Omran Daqneesh who was rescued as a result of an alleged airstrike on the building where he used to live with his family. The photo and video brought a lot of attention to the incident, resulting in coverage by international news agencies such as Reuters, New York Times, Telegraph, and Spiegel, as well as broad coverage on social media platforms. Casualties were also reported. Omran’s brother was one of them. The following video shows an interview with a surgeon who was describing the situation of Omran’s brother when he arrived to his field hospital.

On August 19th, 2016 the Russian Defence Ministry issued a statement following reports about alleged Russian airstrike that hit a civilian building in Al-Qaterji district in Aleppo.

The statement of the Russian Defence Ministry includes the following claims:

“We have repeatedly stressed that the aircraft of the Russian Aerospace Forces in the Syrian Arab Republic do not make strikes against targets inside inhabited areas.”

“All the more, this rule is applied to the district Al-Quaterji of the Aleppo city, mentioned by the western media, and located in the vicinity of the recently opened humanitarian corridors used by civilians for safe leaving the city.”

“These are the unmasking facts which the “pro-oppositional volunteers” from the so-called “Aleppo medical centre” did not thought out describing in fluent English their tear-jerking “feats” in the Aleppo districts controlled by terrorists.”

“Yesterday, the leading western media agencies published video footage and photos of the rescue operation of the 5-year-old boy called Omran from a destroyed building in the district Al-Quarterji blocked by terrorists in the ‪#‎Aleppo city. Referring to “activists” and “volunteers” of the “Aleppo medical centre” it was said that the building had been destroyed by an airstrike carried out by the aircraft of the Russian Aerospace Forces in the evening on August 17.”

In this article we will go through the claims of the Russian ministry of defense and compare it with open source materials (photos, videos, reports) that we have collected and verified to understand better what really happened in the evening on August 17, 2016.

The Russian Defence Ministry claimed that Al-Qaterji district is located directly next to two corridors opened recently through humanitarian operation coordinated by Russia.

Earlier this month in August 1st, Deputy Chief of the General Staff of the Russian Armed Forces Lieutenant-General Sergei Rudskoi made a statement about opening safe corridors in Aleppo. He said that seven humanitarian corridors are active for the rescue and aid of civilians.

The below leaflet was dropped in Aleppo, showing a map with only four corridors. The image has been published by a Facebook group called Syrian_reporters, which is pro-Syrian government.

The four humanitarian corridors shown in the leaflet above are far away from Al Qatarji district. There has been no reports from the ground about two corridors which are open recently and are close to Al-Qatarji district as the Russian Defence Ministry claimed in their Facebook page statement. 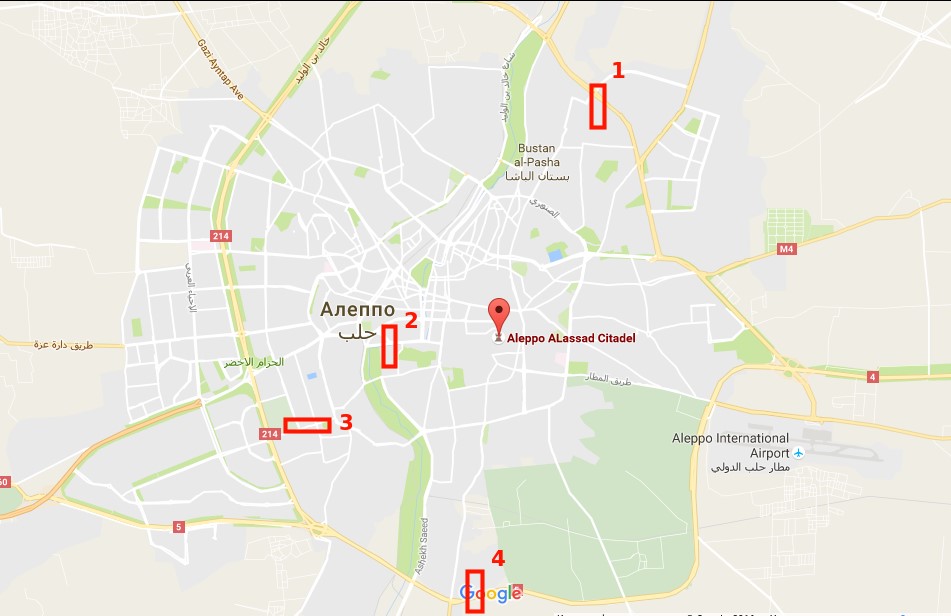 Four corridors shown in the map are in:

Another video below shows an interview with a civilian from Aleppo who denied leaving Aleppo through a humanitarian corridor. He said that RT featured his photo with him standing next to a bakery in Aleppo on a report about civilians leaving rebels controlled areas through the humanitarian corridors. He also said “These are all lies, I still live in the Free Syrian Army controlled area in Sha’ar district in Aleppo and haven’t moved to any area under Syrian regime controlled neither Turkey. I’m not going to leave this area.” He added: “I want to give a message to Russian media channels to not lie and fake news, and photos about this.” 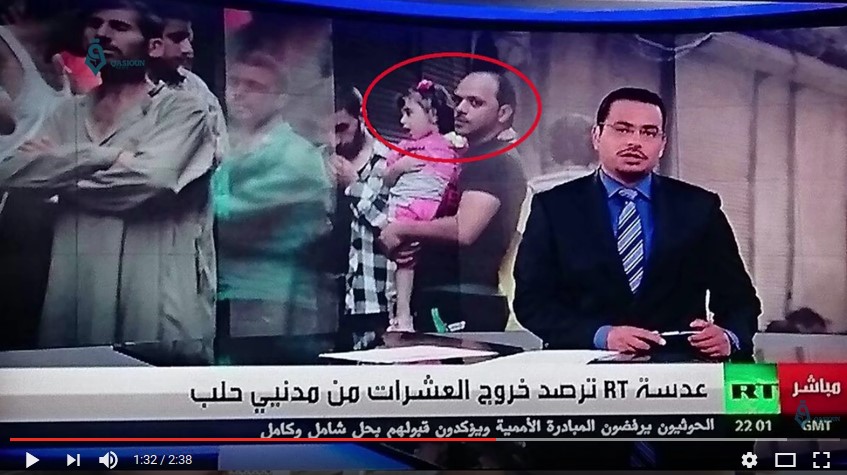 A report published by the Syrian Network for Human Rights on July 30th explained the situation with the corridors. “On 28 July, one day after the eastern neighbourhoods were enclosed, Russia, followed by the Syrian regime, announced that four passages would be opened describing them as “Safe humanitarian passages” so that residents can flee the neighborhoods of Eastern Aleppo; three passages for civilians and one for surrendering fighters. On 28 July Syrian and Russian warplanes dropped brochures including maps for the passages. These passages haven’t opened yet and therefore civilians haven’t left yet.”

During the press conference on August 1st which was held by the Russian Defence Ministry, the following map was used to show the situation in Aleppo as well as the seven corridors marked with circles on the map: Using videos and photographs of the reported attack site it was possible to confirm the location inside Al-Qaterji district.

This video was posted on the Qasioun News Agency Youtube channel showing the damaged area after the attack.

It was possible to establish the location showing by matching the following features in Digital Globe imagery from August 19th 2016:

It was also possible to identify a damaged vehicle in the Qasioun News Agency video in a photograph from Reuters of the location. Damage to the vehicle would suggest it was likely damaged in the attack: 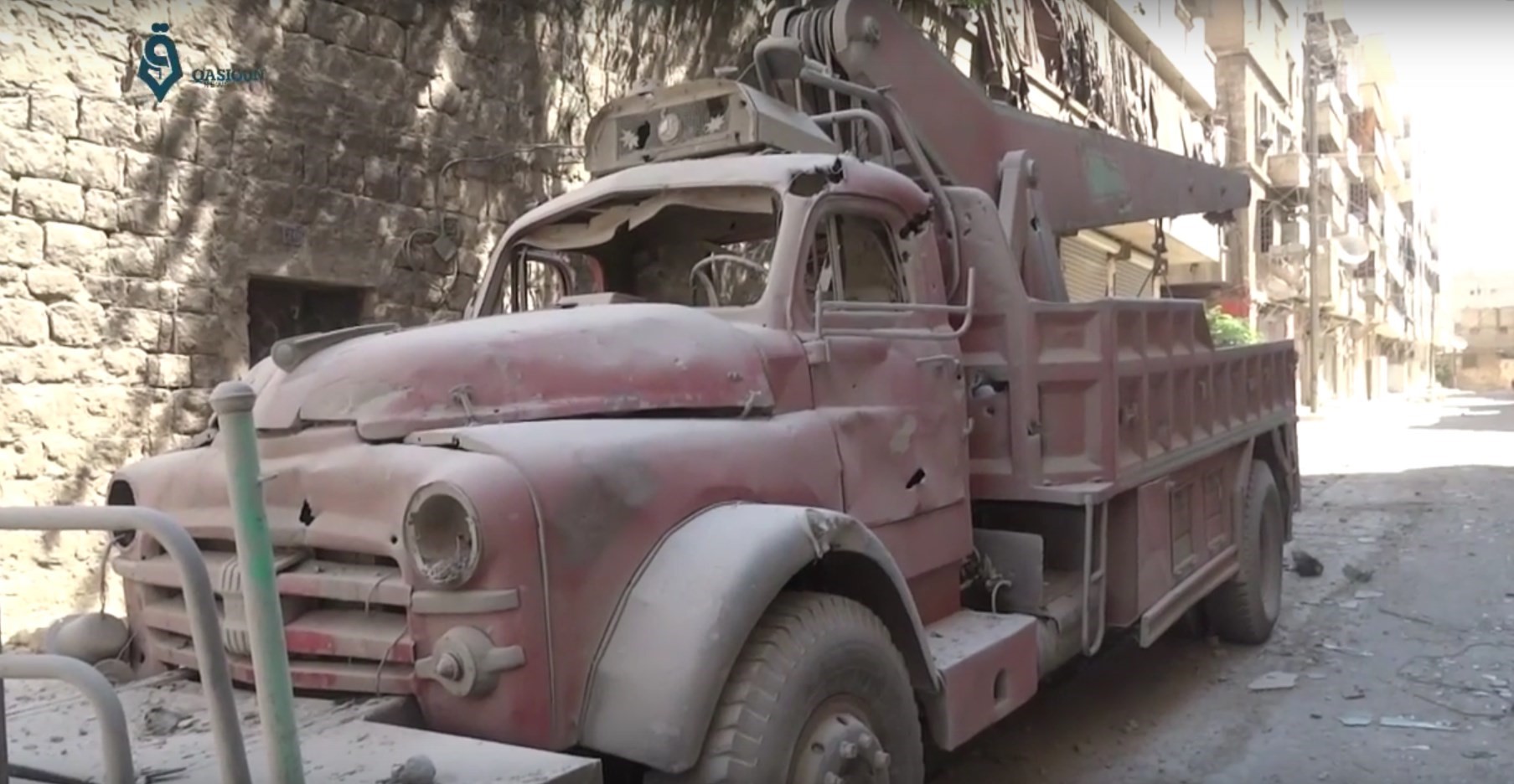 Local activist Mahmoud Rslan provided Bellingcat with another image which shows an alternative angle of the attack site: 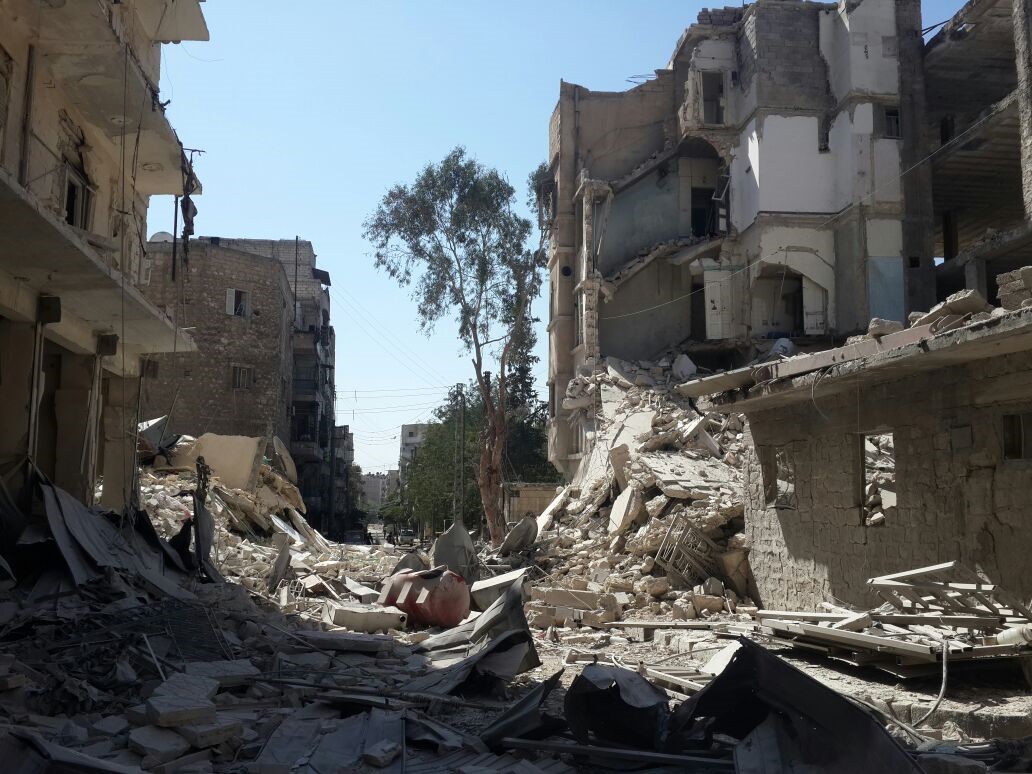 Another video was posted on Al-hadath YouTube channel which shows one of the rescuers who helped the child Omran after the attack.

We can also geolocate the buildings featured in this video to the same locations as the other videos. 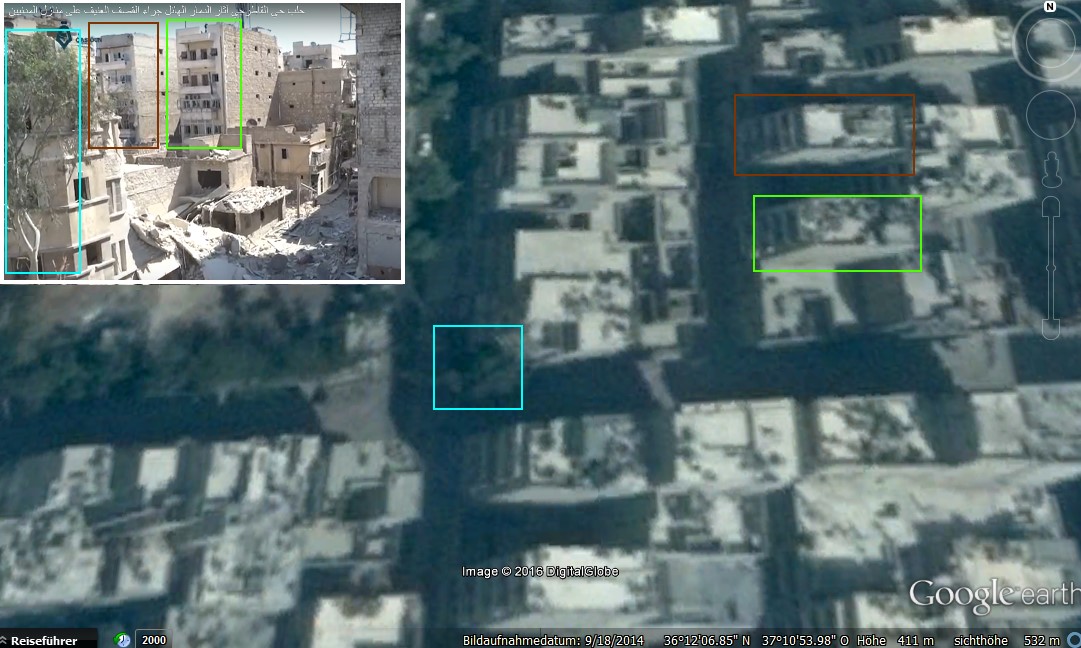 Features visible in the nighttime video showing the rescue operation at the attack site were matched to features in the daytime video, confirming they are the same location: The exact location Omran first appears, being removed from a building, can also be established. In the shot of Omran being rescued three features are visible, what appears to be a wooden rack on the left side, a brick wall, and an orange-brown door: These features are also visible in a shot at the end of the same video, and can be matched to features in the daytime Qasioun News Agency video: This confirms Omran was rescued from the location shown in the daytime videos.

Bellingcat also acquired Digital Globe satellite imagery of the attack site before and after the attack, with the first available dates being August 11th and 19th. The below comparison clearly shows the damage to both buildings occurred between those two dates. (Copyright Digital Globe, NextView License) The Russian Defence Ministry stated the following about the attack:

The “gaz” cylinder the Russian Defence Ministry claims is widely used in the region seems to almost certainly refer to an improvised mortar system more commonly known at the “Hell Cannon” and its various variants. These use repurposed gas cylinders filled with explosive as a warhead, and first appeared in Spring 2013. The below video shows them being constructed and fired:

While the range and power of the Hell Cannon and its variants are generally inconsistent due to the nature of their construction, it seems extremely unlikely one could bring down two multistorey buildings separated by several meters, as seen in the above attack site. If we focus on the specific claim by the Russian Defence Ministry about “the unaffected windows in the next building” we can see from the above images that not only were the windows of adjacent buildings missing, but two separate buildings were completely destroyed by the attack. Having reviewed various broadcasts from “Western TV-channels” about the attack it is unclear which footage the Russian Defence Ministry could be referring to, but it is clear from imagery confirmed from the actual attack site that their claim is not supported by evidence.

In addition to reports by individuals at the attack site of air activity around the time of attack it is also possible to review observers airstrikes warnings published on Sentry Syria, which is an Emergency Broadcast System that was created in cooperation with civilian observatories throughout Syria. They are now generating warnings within seconds of receiving observations.The warnings published around the time the attack is reported to have occurred, 7:15 pm Aleppo time, are as follows:

The report states that on August 17th, 2016 at 7:08pm an aircraft of the Russian air force was seen leaving Hmeim airport, heading northeast in the direction of Aleppo. This can also be seen on the Sentry Syria Telegram channel Clashes Near the Attack Site

The Russian Defence Ministry claimed in their statement that the attack “was not an air bomb, but a mine or a gaz [sic] cylinder widely used by terrorists in this region”. Looking at the clashes near the attacked location (Al-Qaterji) district we notice that it’s on the contrary side of where the attack happened in Al-Qaterji district. The maps below created by Qasioun News Agency shows this.

Another map from a different source, @miladvisor, shows that clashes are mainly in the south of Aleppo in Ramouseh which is far from the attacked site [Al Qaterji district]. Based on open source information it is possible to identify the exact location Omran Daqneesh was rescued, and the buildings destroyed in the attack. It is clear that the Russian Defence Ministry’s statement bears little relation to facts on the ground, as verified using open source information. As with previous Russian Defence Ministry denials related to its bombing campaign in Syria (including denials it bombed a mosque, hospital, and used cluster and incendiary bombs), these denials can be at best described as misleading, and at worst totally false.