The wars in Iraq and Syria have driven millions from their homes and left an entire generation scarred by war. In this vacuum, extremist groups such as the self-declared ‘Islamic State’ and others have seen an opportunity to cement their ideological projects by co-opting and coercing local communities. The most direct way these groups try to do this is in messaging towards, and recruitment of children. These groups see blank slates that can easily be brought on board their train of thought with relatively minimal effort. The following is a documentation and analysis of those attempts, with a special focus on the group known as ‘Islamic State’

Daesh’s focus on children has been documented in the past. This has ranged from their media kiosks in Mosul, to vans that travel about provinces showing off propaganda videos to passersby. The kiosks operate both during the day and night. Without other forms of entertainment, the novelty of constant and newly action packed videos is supposed to make these kiosks attractive to children and teenagers. The prospect of air-conditioning creates an incentive for people to stay longer. Whether they plan on joining IS or not, it spices up an otherwise dull afternoon for the participants by providing free media and others to interact with. If people decide to follow-up and use this as a common gathering space, it increases the level of contact with Daesh recruitment officers. 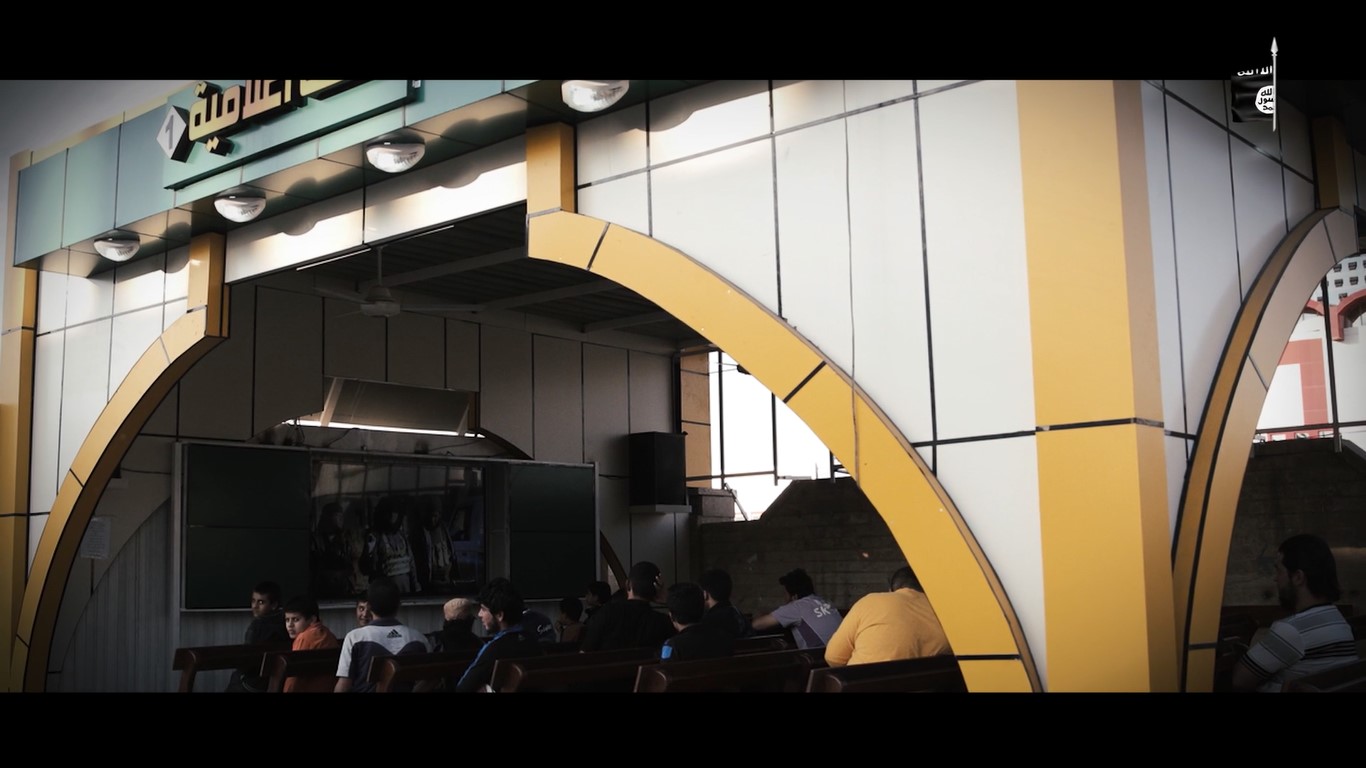 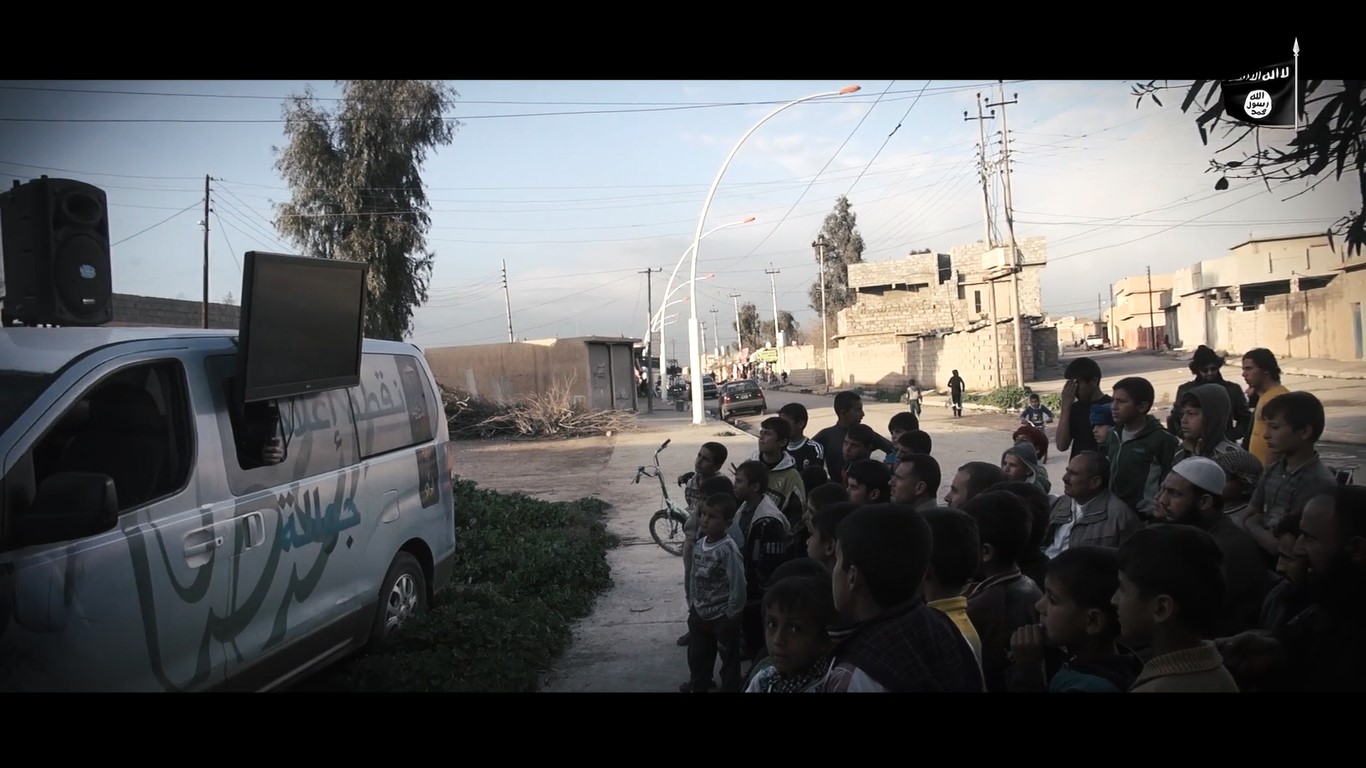 The activity of using a video kiosk as the local waterhole, slowly normalizes the worldview Daesh propagates. It can be argued that only those already sympathetic to IS would be going to one of these kiosks. If IS recruiters are being extra aggressive, it may not be a safe place for more indifferent persons to congregate. This stands in contrast to other activities set up by IS in their areas of control. The most concerning aspect of this is IS’s takeover of local school systems and implementation of a new curriculum.

Captured documents give us insight into just how Daesh has changed curriculum to make it more congruent with the group’s state building project. The new primary school textbook ‘I am Muslim’ says much about Islamic State’s long term goals towards shaping identity. The primary school textbook on “Creed and Jurisprudence” dedicates five lessons to the concept of توحيد (tawheed), a rallying cry for Sunni Salafi identity. It likewise dedicates two lessons to the concept of طاغوت (tahgut). This is a religious boundary crossing the Islamic State translates to be the “tyrannical leaders” of governments opposing them. 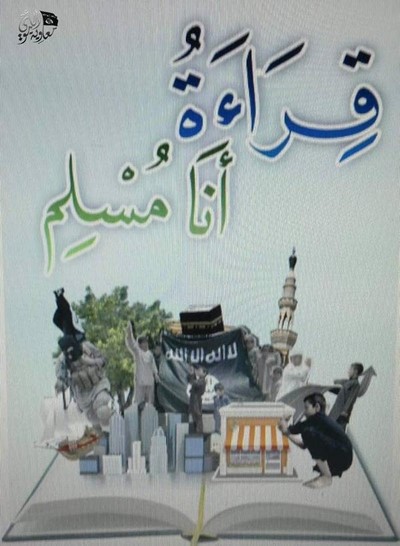 Other ‘innovations’ of the preceding curriculum includes the replacement of ‘physical education’ in schools with one of ‘physical jihad’ a program, that on paper is supposed to include rifle training and horseback riding. This system of schooling is independent of the infamous ‘Caliphate Cubs’ program, which will be expanded upon later.

It must be stressed how all-encompassing IS media efforts are. If the group is to survive in the long term, it needs a dedicated source of recruits. The best way to do this is to make sure that the ideology of the group is introduced as early as possible and in as many different contexts as possible. This means at home, at school, and in the public space. On June 21st Daesh released a language learning app for children. It can be downloaded for desktop or Andoid phones.

In addition to games where one can play dress up, there are games that involve shooting down coalition aircraft and fire different types of mortars and artillery at flags of countries opposing IS. The language sections featured graded Arabic language with harakat to help children with pronunciation. It is unclear if the target audience is all children in Daesh areas, or primarily the non-Arabic speaking children of foreign fighters. The games are meant as a reward for proper memorization of the passage in question, but are nowhere near as sophisticated as the group’s video productions. 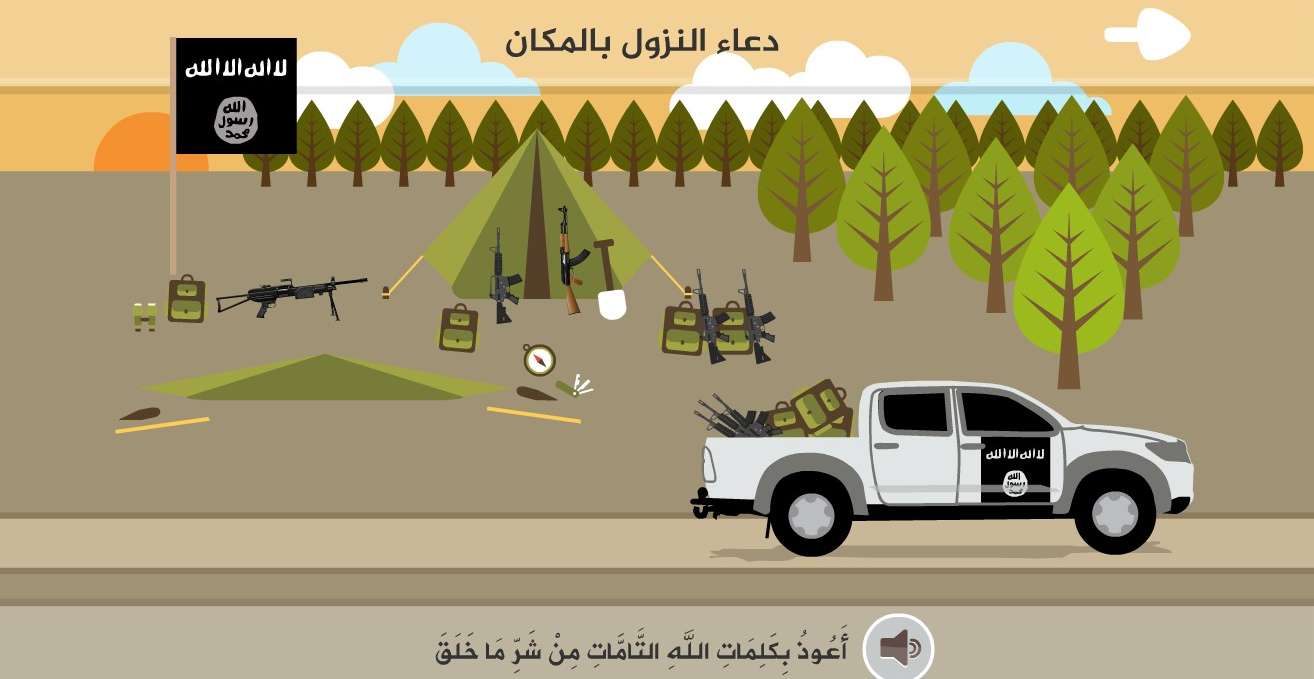 Criticisms of the app’s functionality aside, the endeavor clearly shows IS has long term ambitions for consolidation of their ideology. The app prominently features nasheeds such as ‘Come, Come’ ‘We Will Move With Excellence’ and ‘The Law of our Lord is the Light’. The inclusion of nasheeds and the element of interactivity in how they are presented shows an attempt at introducing the group’s media project alongside other themes. Likewise, al Quran recitations in the app are recitations by the groups own members such as Abu Hasan al Hasani. The melding of traditional Islamic verse, martial imagery and the groups own music are an attempt to blur the lines between the three concepts in the mind of the child on the other end. This is very worrying in the long term and shows just how difficult it will be at defeating the IS ideology.

Few endeavors by the so called ‘Islamic State’ have been as disturbing as the ‘Cubs’ program. Seemingly modeled on the boy scouts, the cubs are specially selected children picked from schools and trained to be child soldiers. The children are socialized via group activities in the form of martial arts, combat training and simple group meals. This comradery is required if the children are to successfully transition to what IS will demand of them as training goes on.

Some children featured in Cubs videos are visibly terrified as they have likely been denied food, water, and beaten for not living up to the expectations of their instructors. In one video from Raqqa province a child no more than 9 shows symptoms of severe anxiety as he rocks to the left and right while reciting his talking points for the camera. Instances of sexual assault being used as punishment have been reported by the United Nations. It is unclear if this behavior is systematic and encouraged, or merely a byproduct of the hyper-violent atmosphere IS trainers are encouraged to produce.

The goal in this is of course to break the child’s spirit and any latent identity formation. From there the child can be more easily socialized into the norms and practices of IS.

Upon completion of the ‘cubs’ process, children can be sent down specialized tracts or get more generalized training. Students who prove themselves able to avoid detection may be assigned roles as scouts on the frontlines. Children who show strength in math may be assigned specialized mortar training. Children who show the most loyalty and drive can even earn the ‘honor’ of being bodyguards for high ranking officials of the Caliphate. These children are equipped with ‘martyrdom vests’ and considered less likely to back out at the last minute like other fighters. A review of ISIS press releases from now to April of 2015 gathered evidence of at least 16 suicide bombers that could easily described as children. Often time these underage fighters are gifted the title of ‘al-Ansari’ which translates to ‘the helper’. The age range appears to be approximately between 11-16 for the fighters with a handful possibly being younger than that. More instances of underage suicide bombers are likely, but research was hampered by takedowns of IS content.

Research from Dr. Horgan of GSU tells us there are approximately 12 locations where cub training takes place. However, there are only 4 or 5 locations completely dedicated to cub training. The education system imposed in IS controlled territories and training of child soldiers, while interrelated, are two distinct processes.  It is unclear if all child suicide bombers underwent cub training, but some of the children sported the distinctive desert MARPAT camo associated with cubs and other ‘elite’ Daesh forces.

IS in it’s former form, Al Qaeda in Iraq had a wing called the ‘Birds of Paradise’ who aided in videotaping attacks, bombmaking and reportedly suicide operations. There is still confusion in regards to the exact evolution of the ‘Birds of Paradise’ wing into what we see today in the form of the Caliphate Cubs. There were intermidiary cardre groups such as the ‘Zarqawi Cubs’ and ‘ISIS Vanguards’. Little is known on these projects, how they functioned, how they differed from earlier versions of the project. What we can say with some certainty is that they were significantly smaller and size and less instituionalized than the Caliphate Cubs.

Jabhat al-Nusra, the other prominent AQI offshoot in Syria runs their own cubs program, Nusra takes a different approach as an attempt to differenciate themselves from IS. The Nusra program was similar to the IS one in many regards. It included physical training, group building activites, all with a Sunni nationalist backdrop. Where it differed is that the Nusra program was less blatant about the more militaristic components. If it did involve bomb making and other activities, they concealed that aspect from the public view.

The best insight we have is a 50 minute promotional documentary from Eastern Ghouta. Nusra’s approach here was to play up the charitable aspects of their program. Children are shown drinking coke and orange juice while attending a pool party, playing musical chairs and having wheelbarrow races inside of a mosque. The program has since been rebooted and little information has gotten out on how it has changed. Children in new promotional materials appear older, in their mid-teens rather than between ages 7-10 as it was the 2013 version of the program. Nusra’s dedication opacity makes it very difficult, if not impossible to make any judgements based on publicly available data alone. The communities of Iraq and Syria will need decades of healing to properly recover from the calamity that has beset them. In the guises of charity, foreign networks have begun the indoctrination and recruitment of Syria’s most desperate. Groups will defend their actions here by citing the lack of aid from the outside. By claiming Syria’s youth need to be ‘empowered’. This is a cynical farce by political extremists with their own long term agenda. If the international community is serious about bringing peace to Syria, Iraq and the wider Levant, unconditional support needs to be given to those most victimized by the conflict. That starts with Syria’s children.