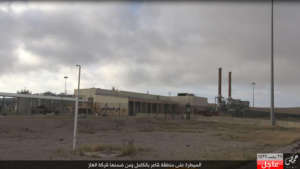 A picture from Islamic State media of an oil and gas facility in the vicinity of Shaer.

Reports on Monday that fighters from the Islamic State blew up portions of a major Syrian natural gas field have given rise to furious speculation that an earthquake on the same day was somehow related. But is such a connection likely, and if so, how might it have happened? Given the confluence of social media reports, activist accounts, and preliminary seismic data from the event, it does appear possible that members of the Islamic State set off an explosion so powerful that it appeared as an earthquake on regional geological reporting stations.

The Shaer gas fields, situated approximately 50km north of the city of Palmyra, are a crucial part of Syria’s natural gas infrastructure. Tucked away in the rugged and arid expanse of the Homs governorate’s eastern flank, fighters from the Islamic State recently captured the Shaer fields from Syrian government forces for the third time since the start of Syria’s civil war. In the days since a mix of elite Syrian forces, including elements of the Desert Falcons and the Tiger Forces, have been attempting to retake the area, recently culminating in the recapture of several key hills west of the Shaer fields. Incidentally, these heavy clashes along the frontline west of Shaer reportedly continued throughout Monday. It was amidst this lethal backdrop that initial reports of both the destruction of the Shaer fields, as well as a minor earthquake, emerged.

Syrian state media first reported a 4.4 Richter earthquake just north of Palmyra city at 12:14PM local time on Monday at the coordinates of 34.72 N and 38.28 E, reflecting data released by the European-Mediterranean Seismological Center that drew on readings from the National Center for Geophsyical Research in Beirut and the Kandilli Observatory and Earthquake Research Institute in Istanbul, the latter of which has also released its early data. The United States Geological Survey did not detect the seismic event. It should be noted that these early data releases likely use preliminary placeholder depths of either 10km or 5km, respectively, and have a margin of error of several miles in respect to an exact epicenter.

The approximate epicenter of the seismic event, per EMSC data.

In the hours following the earthquake, pro-IS social media accounts also started hyping the “destruction” of the Shaer gas field, presumably as some sort of scorched-earth tactic. Likewise, local opposition activists also reported the destruction of several wells at the Shaer fields at the hands of IS fighters. By the end of the day, major pan-Arab daily Al Hayat reported that IS fighters had triggered major explosions in the Shaer fields – explosions so massive they were allegedly audible up to 50km away. 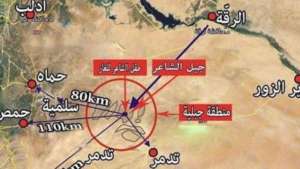 The Shaer fields lie in the center of this circle. Adjusting for the disparity between Turkish and Lebanese data, as well as the difficulty in locating surface explosions, the Shaer gas fields and other oil and gas infrastructure likely lie within the projected epicenter’s margin of error.

A prominent pro-Syrian government English-language blog also reported that IS had set off a “huge explosion” at the Shaer field in a bid to destroy its wells. So far the Islamic State has been mum on the topic, neither mentioning the allegations through its official ‘Aamaq media outlet nor through its local Wilayat Homs affiliate. 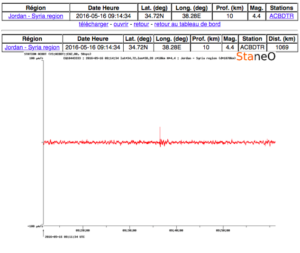 An early seismographic readout of the event. The abrupt surge in seismic activity is typically more consistent with manmade blasts than natural earthquakes.

Most tellingly, a seismographic readout released by Vibrato STANEO, a France-based seismic activity monitor, suggests that the seismic event could have been a manmade blast. The sudden, vertical spike of activity in the form of measured seismic ‘P waves’ without preceding seismic activity differs sharply from most natural earthquakes. Granting the lack of lead-up P waves in the seismic field that are usually seen before the apex of a quake, the STANEO seismograph appears to mirror manmade blast activity, rather than a natural earthquake. 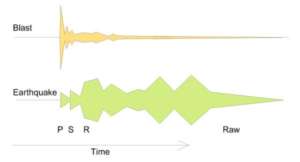 This schematic from Scientific American illustrates the difference in waves between natural earthquakes and manmade blasts.

Assuming the 4.4 Richter measurement holds and is not revised downward, the blast yield would be equivalent to about 60 tons of TNT. With a 4.4. on the Richter scale it would rank as notably more powerful than the 2001 AZF chemical factory explosion in France – audible up to 80km away – but would still be an order of magnitude weaker than North Korea’s latest test of a small nuclear weapon. Ostensibly, IS could achieve such a powerful explosion through using a sufficient amount of conventional explosives in the process of destroying the wells, supplemented perhaps by the ignition of high-pressure gas trapped in the ill-fated wellheads.

Of course, more data is needed to confirm this with ironclad certainty, and a more quantitative assessment of spectral waves from the seismic event, should more data be forthcoming, could better ascertain its nature and and rule out outlying possibilities, such as the remote chance it was a so-called strike-slip quake, which can mimic manmade explosions in the raw data. However, given the initial seismographic data and the myriad reports of serious human kinetic activity in the Shaer gas fields coinciding approximately in time and place, it is certainly possible IS set off a detonation powerful enough to register in area monitors as a small earthquake. As such, this remains a plausible and even likely explanation for the event, barring new and contra-indicating seismic data or conflicting forensic evidence at the Shaer field itself should it be retaken by the Syrian government and it be revealed otherwise. An event of this seriousness, if confirmed, has dire implications – it suggests that as the self-proclaimed caliphate contracts or flounders on the battlefield it may engage in increasingly reckless and self-destructive behavior to deprive others of its former spoils.