Back in 2013, it was reported that Sudan would acquire 12 Soviet-era Su-24 Fencer aircraft from Belarusian BelTechExport. The aircraft, previously flown by the Belarusian Air force, were decommissioned from the cash-strapped air arm not long before.

We’ve been tracking the swing-wing bombers ever since Belarus transferred them to the 558th Aircraft Repair Plant in Baranovichi. There, workers overhauled the ground attack planes and repainted the bombers in a fresh desert camo scheme.

The same year the aircraft were delivered. The Harvard-based Satellite Sentinel Project were the first to publish satellite imagery showing three of them parked at Wadi Sayyidna just north of Khartoum. United Nations arms control documents later showed that Sudan received a total of four in their first shipment.

With new bombers, the north African country wasted no time putting them to use. Since then, they’ve been involved with several bombing runs in South Kordofan’s Nuba Mountains, helping kill and displace the local Nuba population. Earlier in 2015, Khartoum’s Sudan Armed Forces stepped up their campaign by continuing to arm brutal militias to attack the region. There’s even evidence that the regime has employed cluster munitions.

By December, the warring parties failed to come to a cessation agreement which means these ground attack aircraft haven’t flown their last flight in the conflict. But the question remains, will future strikes involve the same aircraft received in 2013?

It’s hard to say, but here’s what we know.

New satellite imagery (top header image) of Wadi Sayyidna also show two Fencer parked on the apron in January 2016. Assuming the number of aircraft deployed is correct, the January imagery suggests either the aircraft have returned from the conflict or that new arms transfers occurred. However, it seems unlikely that Sudan would have recalled the bombers from the Saudi-led coalition given developments in Aden throughout the month. (See more about that here). There’s also been no media attention on the return of the aircraft to Sudan.

By late February, the Sudan Tribune reported that the Saudis would be providing the north African country USD 5 billion in military assistance. Citing unidentified sources, the article suggests the additional funds were a reward for Sudan’s political and military support confronting Iran [read: Yemen]. The new support comes in addition to renewed Saudi agricultural investment and banking support.

Then there’s also previous satellite imagery from Belarus to consider. Back in 2014, we watched Belarus move more of the decommissioned bombers to the 558th’s work apron. The following year, we saw the finished products roll out of the drive-through maintenance hangars and parked nearby. Given the camo scheme observed in the imagery, it’s likely Belarus has provided a second batch of Su-24 to Sudan.

If confirmed, it would suggest that Belarus is continuing with additional deliveries of the rumored contract. While we can’t be 100% certain, we await further imagery to provide a higher confidence level of this assessment. 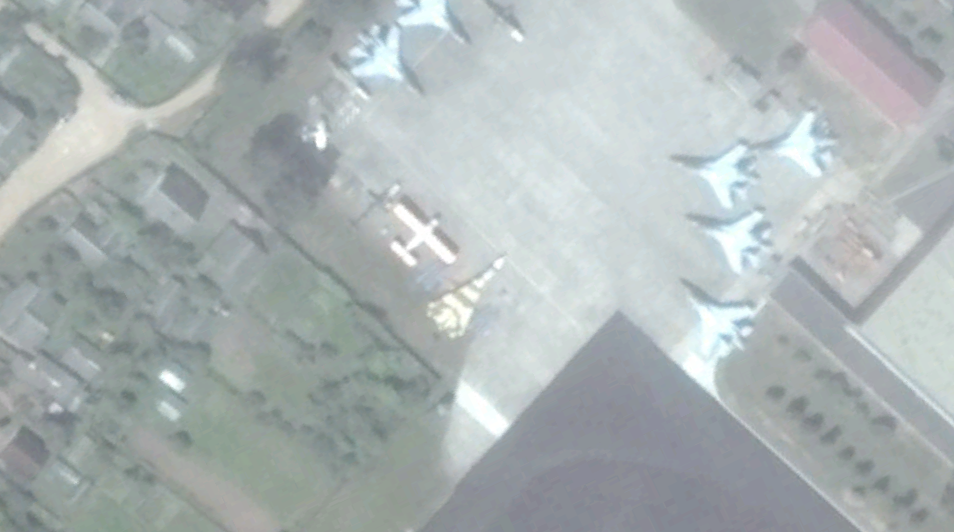