Following this weeks earlier attacks on medical facilities in Syria run by Médecins Sans Frontières (MSF) the Russian Defence Ministry has published a statement explaining why it’s not responsible for the attacks. Much of the statement is a mess of barely coherent claims, and reads closer to a conspiracy theory than a statement from a serious organisation. The Russian Defence Ministry attacks MSF, questioning whether or not the facilities actually had anything to do with MSF in the first place;

In a Foreign Policy article dated February 16th, Syrian MSF Hospital Kept Location Secret to Avoid Being Bombed, the reason for this is quite clear. Those running the medical facility in Idlib were concerned that sharing the location would more likely make them a target, having seen many other medical facilities attacked in Syria.

Moreover, messages concerning the allegedly destroyed hospitals and schools in Azaz dated February 10 can be simply found on the website.

In other words, this fabrication had been prepared but not realized the day before the meeting of the heads of foreign ministries of Russia and the USA in Munich, the results of which, as the Russian Defence Ministry assumes, are so opposed by Turkey.

This appears to refer to articles on the MSF website published on February 10th, Syria: Health system close to collapse in war-torn Azaz district and Syria: Escalation of Conflict in Azaz District Could Have Dire Consequences, which refer to the situation in the Azaz district:

Meanwhile, the fighting continues to put extreme pressure on the already devastated healthcare system. This includes several hospitals and smaller health facilities in Azaz and the rural areas around Aleppo city, having been hit by airstrikes in the last two weeks, including at least three MSF-supported hospitals.

“Azaz district has seen some of the heaviest tolls of this brutal war, and yet again we are seeing healthcare under siege,” said Muskilda Zancada, MSF head of mission, Syria. “We are extremely concerned about the situation in the south of the district, where medical staff, fearing for their lives, have been forced to flee and hospitals have either been completely closed, or can only offer limited emergency services.”

In the message dated February 15 concerning the allegedly destroyed hospital in Idlib, there is no photo or video of this building: neither undamaged nor destroyed. 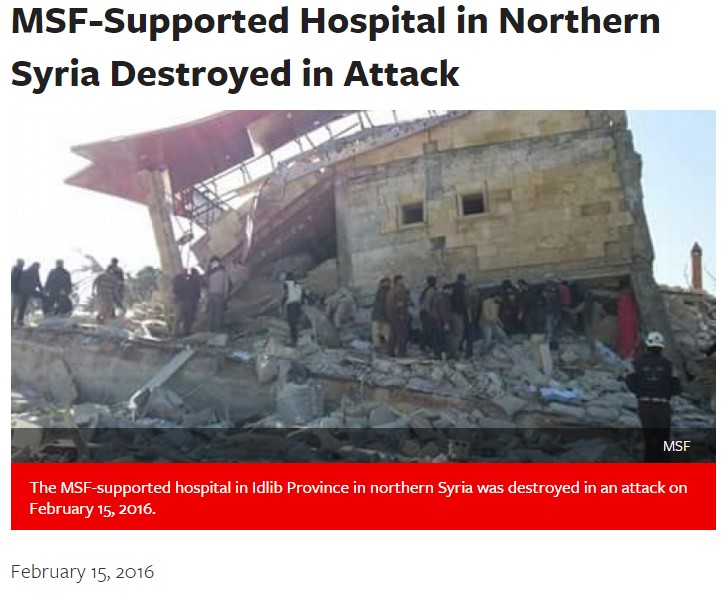 Next, the Russian Defence Ministry raises where the stories are being reported from:

It is to be emphasized one more time: neither Syria, nor Idlib or Aleppo; it was the Turkish city of Gaziantep near the border with Syria.

By the way, that was the city where, by a strange coincidence, the largest training camps had been organized under the aegis of the Turkish secret services for militants arriving into the country from other countries including CIS who were then sent to Syria to fight within terrorist groupings.

If anybody in the Turkish Republic thinks that the Russian party does not guess that, they should not indulge in illusions.

The information concerning the place where these fabrications had been made has been published, apparently due to negligence of authors or editors of the website.

It’s unclear whether or not the Russian Defence Ministry actually believes this absolute nonsense, or have reached the point of being so desperate to deflect criticism that they make up any rubbish to defend themselves, even if it’s laughable conspiracy theories about MSF and Turkey plotting against them.