According to Sputnik and multiple Russian-language blogs, the Syrian Arab Army (SAA) recently deployed ten Russian combat robots in a battle in the Latakia province, leading to “about 70” dead rebel fighters and no dead SAA soldiers in fighting. Per the reports, these ten robots included six “Platform-M” systems and four “Argo” robots, which were controlled from a Russian command post. This news — if true — would warrant significant coverage, as it would mark the first successful use of combat robots in actual warfare, bringing about a significant number of casualties of enemy combatants.

So, did it happen? 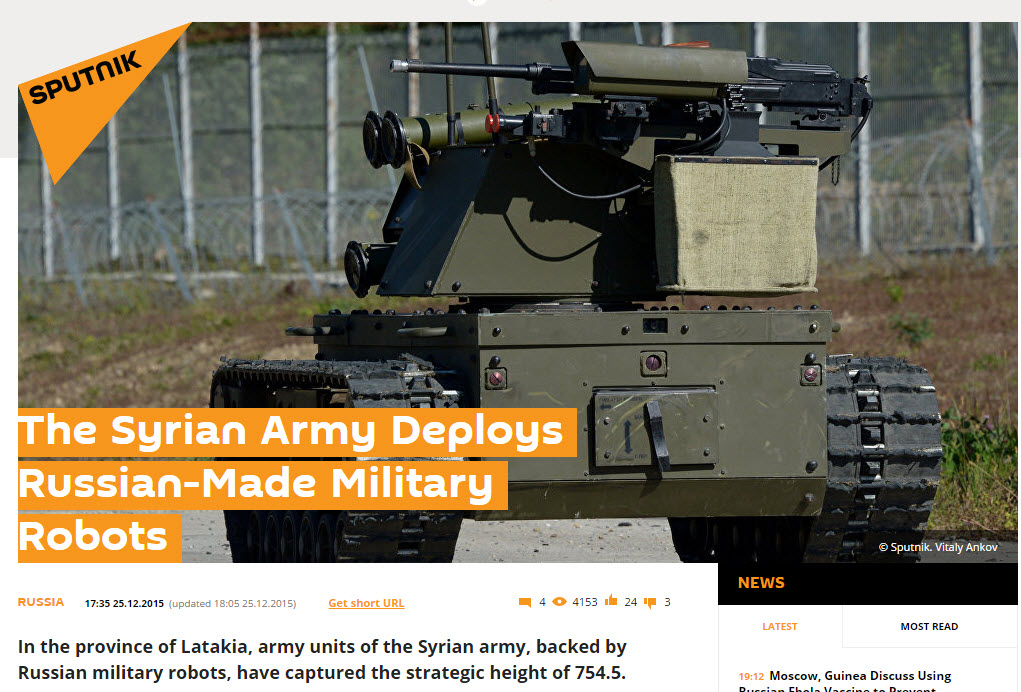 In such a spectacular story, the first practice should be to examine the sources of the claims. The original source for the “combat robot” story is from Aleksandr Popov on the Russian social network Maxpark.com on December 20, 2015 (archive). On Maxpark, the post garnered over 30,000 views. Popov is a prolific writer on Maxpark–a site not known for its journalistic integrity–but does not seem to have any inside connections with the Syrian or Russian armies, judging by his past posts. Popov’s post (which will be detailed in the following section) was reposted seemingly verbatim (archive) on December 24 on the popular Russian LiveJournal account Beriozka_Rus. Finally, the post was rewritten and cleaned up (archive) for the Kremlin-funded news site Sputnik on December 25. In this final iteration of the post, the core information–number of dead, locations, type and number of robots used–are unchanged from Popov’s original claim.

The Location and Time

Each version of this post (Maxpark, LiveJournal, and Sputnik) describes the battle taking place in the province (Governorate) of Latakia at Height 754.5, with the Maxpark/LiveJournal version also indicating that the battle took place at the Syriatel Tower. Both of these locations are just north of Ateera, with the Syriatel Tower located at 35.8535679, 36.0403007 and Height 754.5 just west of the tower, near the area 35.8529244, 36.0291374.

The killing of 70 rebel fighters and the successful use of cutting-edge Russian military equipment would surely be a significant, PR-worthy event for Assad’s cause. One would think that if such an event occurred, it would not be difficult to find some report of it in the Syrian media. When searching for military clashes near the Syriatel Tower and Height 754.5 in December, we find reports in social media (archive), Iranian media,  Russian media, and Syrian media that the SAA has took control of various points in the Latakia province, including the Syriatel Tower and Height 754.5. This military offensive took place just a few days before the Maxpark post on the supposed use of Russian combat robots.

A Syrian news broadcast from December 19 shows the SAA offensive at the Syriatel Tower. In the broadcast, there are no mentions of Russia, Russian cooperation, combat robots, or anything else that would indicate that the Maxpark or Sputnik stories are accurate:

Matching the tower and landscape seen in this video with the geographic and structural features of the Syriatel Tower in Google Earth and Wikimapia demonstrates that this is indeed the correct location: 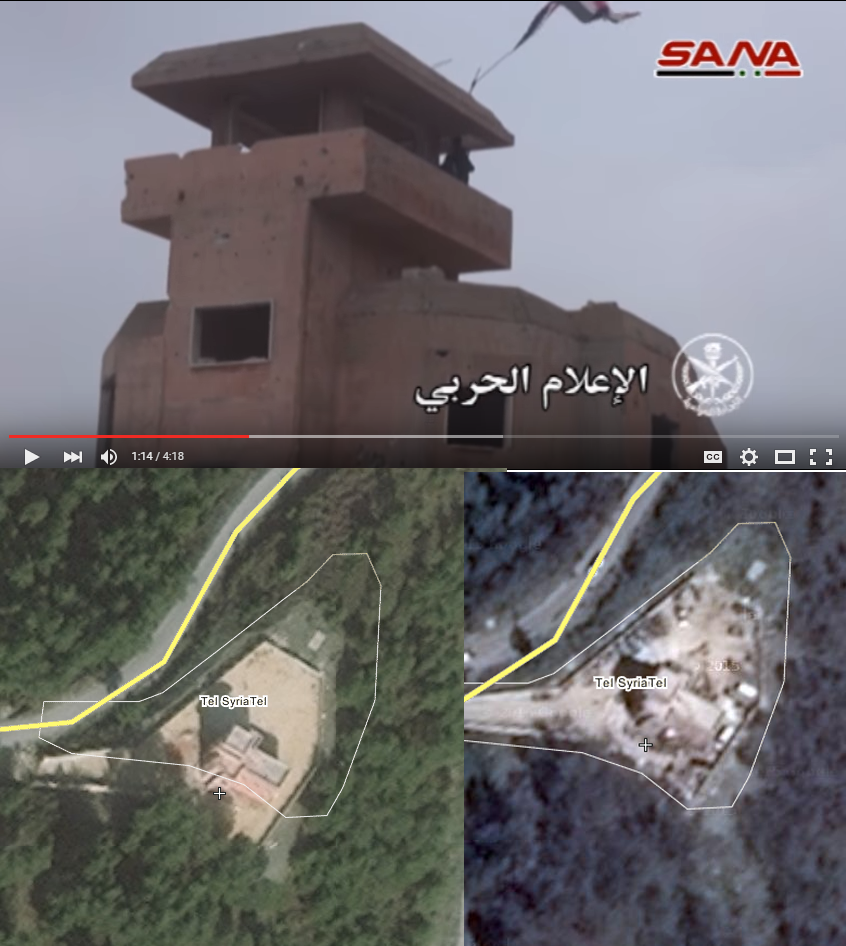 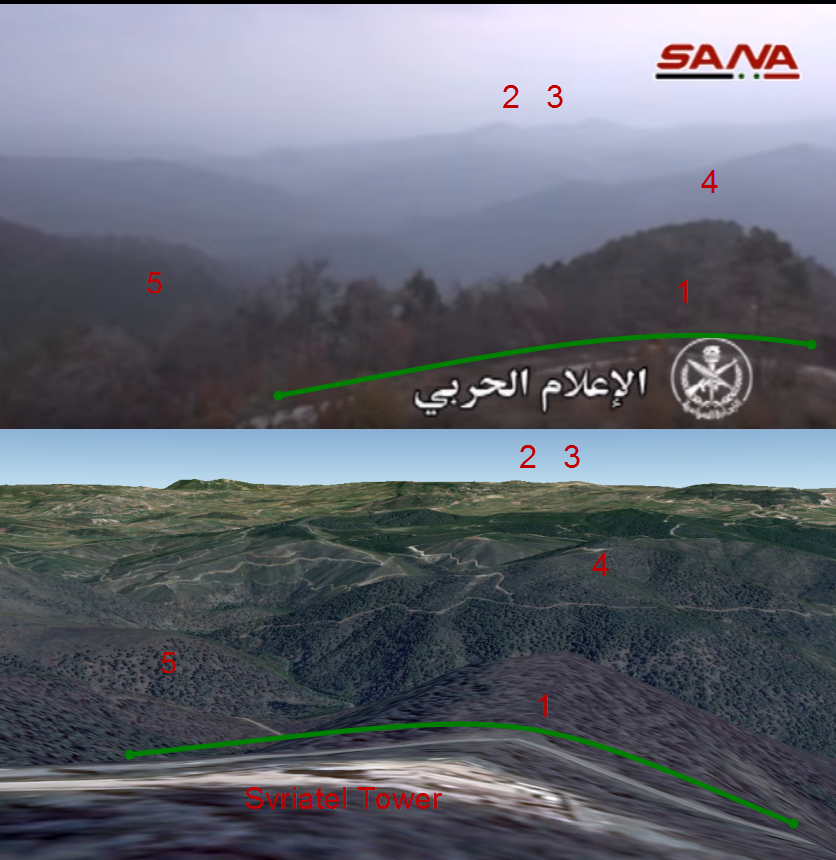 In this video broadcast, there are no visible combat robots, and no mention or sight of 70 dead rebels. Syrian media reports describe specific maneuvers from the SAA, such as dismantling mines in a tunnel, but again, there are no indications of Russian cooperation or the use of ten combat robots. In fact, as one Russian-language blog pointed out, some reports of the offensive indicate that there was Hezbollah cooperation with the SAA in the attack on the Syriatel Tower, with no mention of Russian support. Some reports indicate that twenty “radical Islamists” died, or over 25 “Takfiri terrorists,” but there are no mentions of numbers even half as large as the 70 dead cited by Maxpark and Sputnik.

The combat robots in questioned have been long hyped by the Russian defense sector, best summarized by Robert Beckhusen at War Is Boring. A successful deployment of these robots would be a tremendous boon to the reputation of the Russian military, so it would be in their best interests to take an significant number of photographs and videos of the robots in action in Syria. After all, as the Sputnik article describes, there were reconnaissance drones “deployed to monitor the situation on the battlefield” during the battles near the Syriatel Tower. So, what sort of juicy footage do we have from the world’s first successful deployments of combat robots, resulting in scores of deaths of enemy combatants? As it turns out, none.

All of the photographs posted in the Maxpark story from Aleksandr Popov are from times and locations other than the December battles in the Latakia Governorate.

For example, a photograph that comes before a description of the 70 killed soldiers and the attacks near Syriatel tower is actually from a scene of the conflict between Saudi Arabia and Yemen. This video was published on December 18, 2015, making it a relatively new source that could not be easily traced back (thanks to user vybralimya for this finding). A screenshot for the Maxpark post, which implies that this photograph is from the battle in the Latakia Governorate A screen capture from a news broadcast posted on December 18, 2015 concerning fighting between Saudi Arabia and Yemen

The various photographs of the robots being deployed are not from the actual operation, but from training exercises. 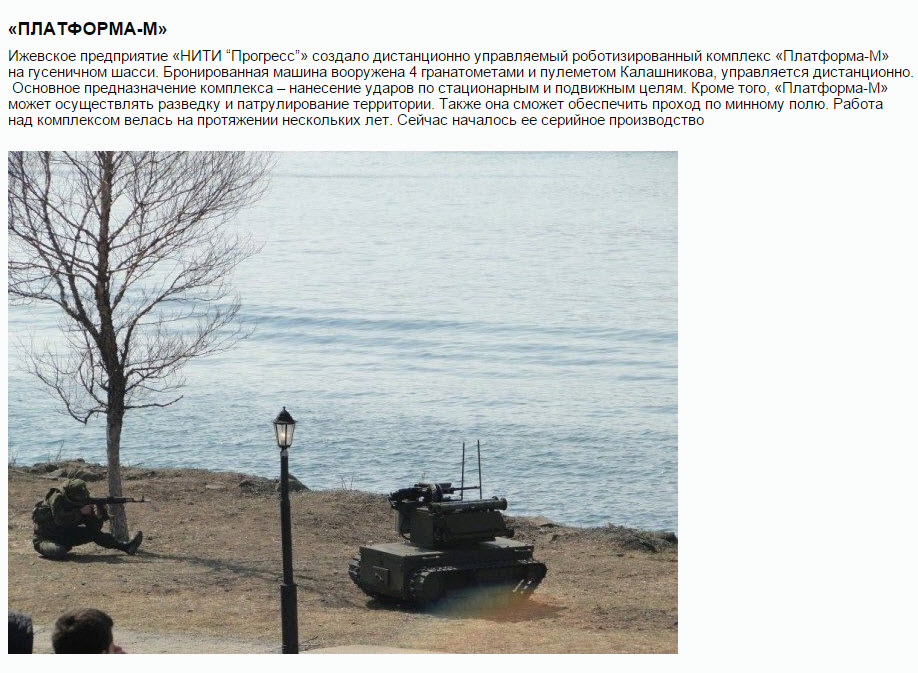 And so on. While some of these photographs were likely used by Popov to serve as context for the reader, some–such as the screenshot from the Saudi video–were clearly meant to represent events in Syria. Therefore, we can say that there is no photographic or video evidence of combat robots in the December battles near the Syriatel Tower, as the posted images are incorrect, and media reports from the battle do not show or describe any combat robots.

Syria almost certainly did not use Russian combat robots in military activity of mid-December in the Latakia Governorate. The Sputnik article is careful to not use the misattributed photographs of the Maxpark post, but the core information used in the report is still almost the exact same as that of the blog post from five days earlier. It is possible that Sputnik has inside knowledge that combat robots were used and 70 militants were killed in Syria, but there is no available open source information–local media reports, videos from the scene, social media reports, etc.–that contradicts the more likely conclusion that Sputnik simply rephrased and reposted a crude, fake blog entry from a Russian social network.