A Brief Open Source History of the Syrian Barrel Bomb

On August 22nd 2012 two videos from the town of Batbo, Aleppo, were published on YouTube, showing the remains of what was described as a “hand-made bomb dropped by a helicopter”.

At the time there was a great deal of confusion about what this could be. It seemed incredibly crude, a metal container filled with black powder and pieces of metal rebar, with handles welded to the outside of the container. The idea that a professional air force would throw such crude devices from a helicopter seemed bizarre. Some suggested they were disarmed rebel IEDs that had been reused by the Syrian air force, others that the videos were fakes.

But more of these strange munitions began to appear. On August 28th 2012 a video from the Idlib region showed another example.

This was described as a barrel dropped from a helicopter, and seemed not dissimilar to the earlier device filmed in Idlib. The following day, on August 29th 2012, Al Arabiya news ran a report describing barrels filled with explosives being dropped on Homs.

In this report it was claimed that oil barrels were being filled with 200kg of TNT, and that the fuse ignites when it hits the target. Since that report was aired, and despite repeated claims, it appears there’s virtually no examples of barrel bombs that are actually made from oil barrels. Early examples used a variety of containers, with sections of pipe appearing to be one of the more popular choices, so in one sense the term “barrel bomb” is actually a misnomer, as more are made from pipe than barrels.

Despite a growing number of videos showing the remains of what were now becoming increasingly known as “barrel bombs”, there was still a great deal of resistance from certain groups and individuals to the claim that the Syrian air force would use such devices. Russia Today’s regular contributor Evgeny Khrushchev wrote in his article “Barrel Bomb Baloney” (now deleted from the Russian Today website but archived here) that barrel bombs were “the latest spin of the Al-Qaeda psychological operation against the Syrian government”, adding “the terrorists and jihadists for hire have resorted to a disinformation campaign to discredit the authorities”. However, more evidence of barrel bomb use continued to be published online, including one set of videos that confirmed their use by the Syrian air force.

In these videos, apparently recorded on the mobile phone of a member of the Syrian military, rows of barrel bombs are shown lined up in the back of a transport helicopter as it flies over Syria. In the above video, a wick fuse is lit by one of the men on the helicopter, just before it’s pushed out of the rear of the helicopter. This video was significant not only because it showed barrel bombs being used by the Syrian military, but it also helped develop a better understanding of how the bombs functioned. Despite the earlier claim in the Al Arabiya report that the bombs detonated on impact a wick fuse suggested something different. If the wick was too long the bomb would crash into the ground, with a possibility that the fuse would become separated from the bomb, resulting in it not exploding. If the wick was too short then the bomb would explode before hitting the ground, which explained some of the unusual videos coming from Syria showing unexplained mid-air explosions.

As with many videos from Syria there were claims the videos were faked, or not filmed over Syria, but by using the occasional shot in the videos of the towns and villages the helicopter passed over it was possible to match those towns and villages to specific locations in Syria using satellite imagery from Google Earth, confirming the videos were filmed in Syria. In January 2013 images from the captured helicopter base near Taftanaz showed barrel bombs in storage, further confirming their use by the Syria military. 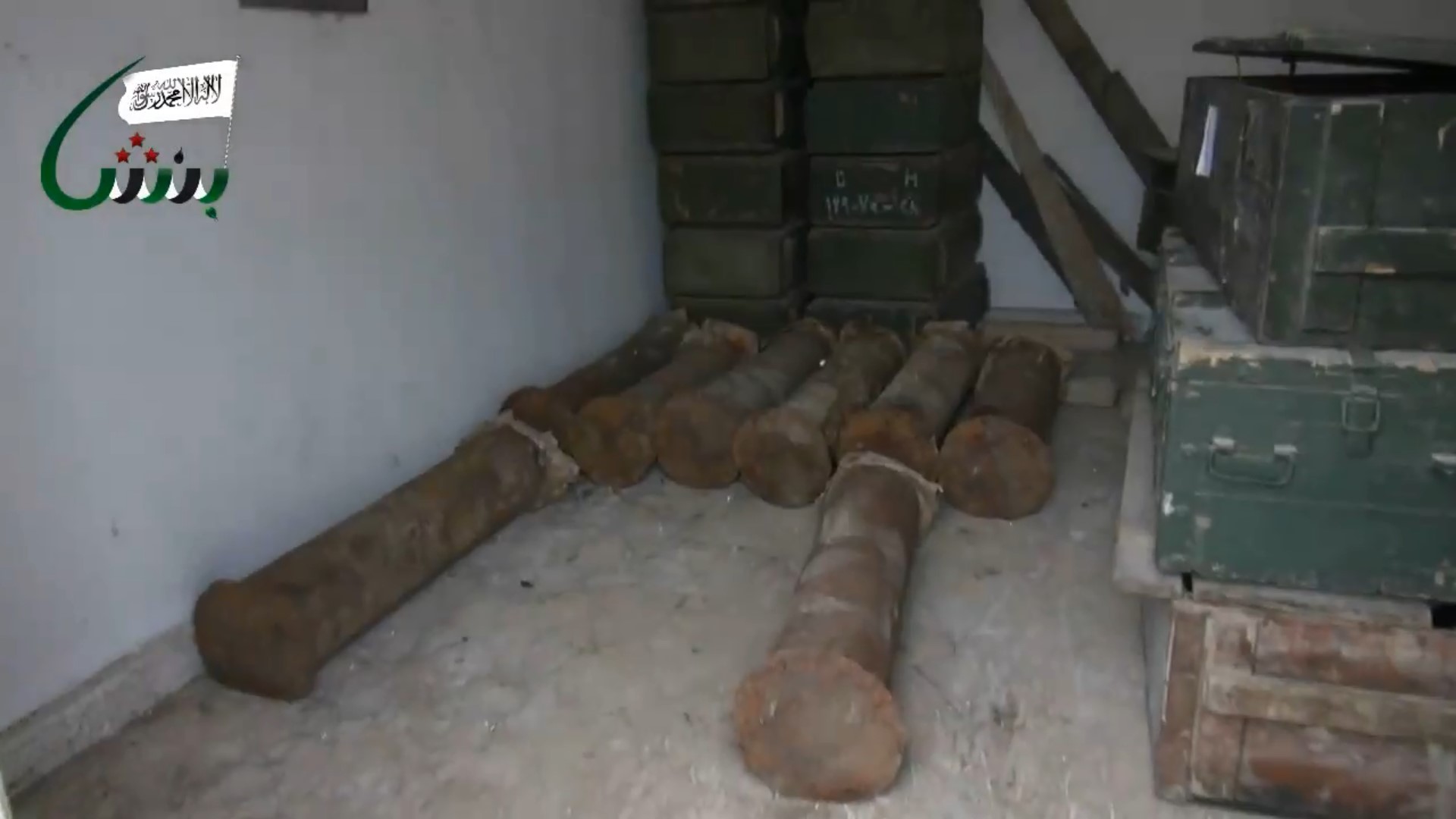 In late 2013 there was a significant change in the use of barrel bombs by the Syrian military. Videos and photographs began to be shared online showing much larger barrel bombs than had been seen before, and being used in much larger numbers. Initially there were various designs used but quickly one design was adopted by the Syrian military and used across Syria in large numbers. Thanks to their widespread use it was possible to collect images of the new design barrel bomb, for example, this video still showing one in mid-air.

This shows the barrel bomb has three tail fins, a metal plate at the front of the bomb, and something sticking out of the side of the bomb. By examining other images it was possible to establish more information about the new design. In the below image the metal plate can be see more clearly. 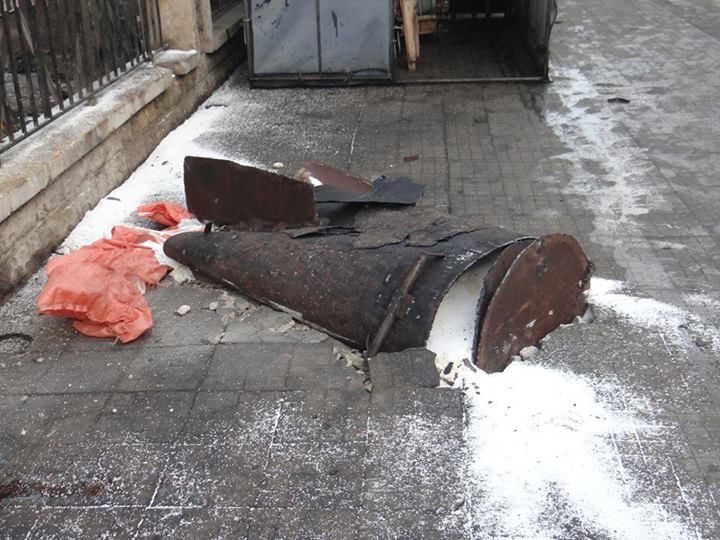 This metal plate is in fact the impact fuze, with metal rods along the outside of the bomb holding the plate away from the bomb, with explosive det-cord sandwiched in between. The tail fins act to stabilise the bomb as it falls, ensuring the fuze plates are facing downwards, making the new design far more reliable than the crude wick fuses used in earlier designs of barrel bombs. But why three tail fins, and not four? 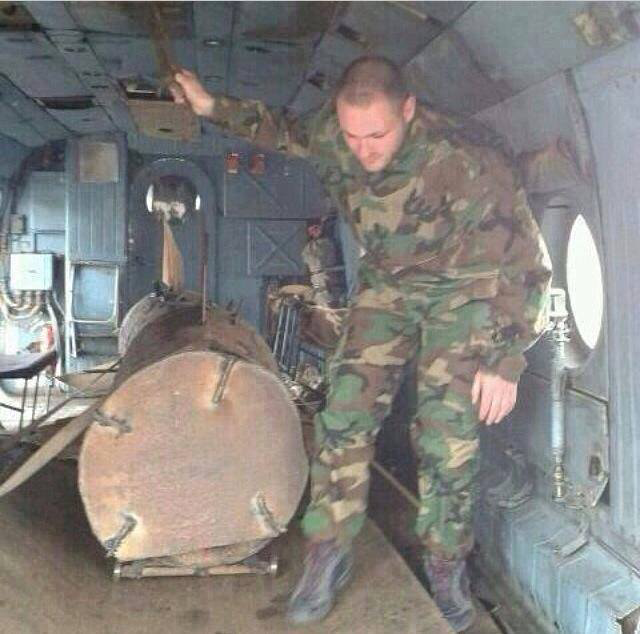 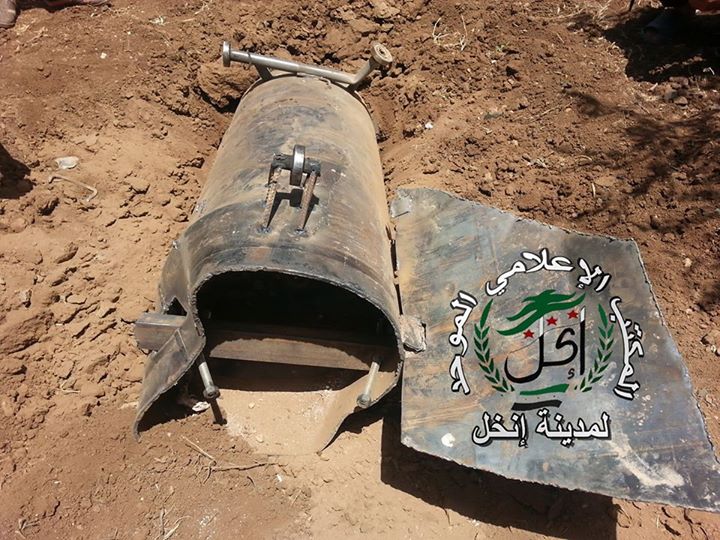 This image shows another design element that’s consistent in this new design of barrel bomb, the metal bar with two large bolts that’s in the rear of the bomb. This appears to be used to hold in place a metal plate that holds in the fill of the bomb, likely as it’s not possible to weld shut a barrel bomb filled with explosives.

This new design appears to have replaced all earlier designs of barrel bombs across Syria, and allowed the Syrian government to use its transporter helicopter fleet to intensively bomb opposition held areas of Syria with this more efficient type of barrel bomb. Then, in April 2014, a new type of barrel bomb was used.

The first attack occurred in the town of Kafr Zita on April 11th 2014. Videos from the attack showed victims of all ages with breathing difficulties, and over the next two weeks at least 8 other similar attacks were reported. Videos and photographs of the remains of barrel bombs used in these attacks showed a similar design of barrel bomb casing as seen in earlier videos, but with the addition of a gas cylinder inside the bomb.

The above video provided some information about the new design. It uses the same barrel bomb casing, but rather than being loaded with explosives the end of the gas cylinder has explosive det-cord wrapped around the end. The below example shows the remains of a cylinder where the det-cord detonated. 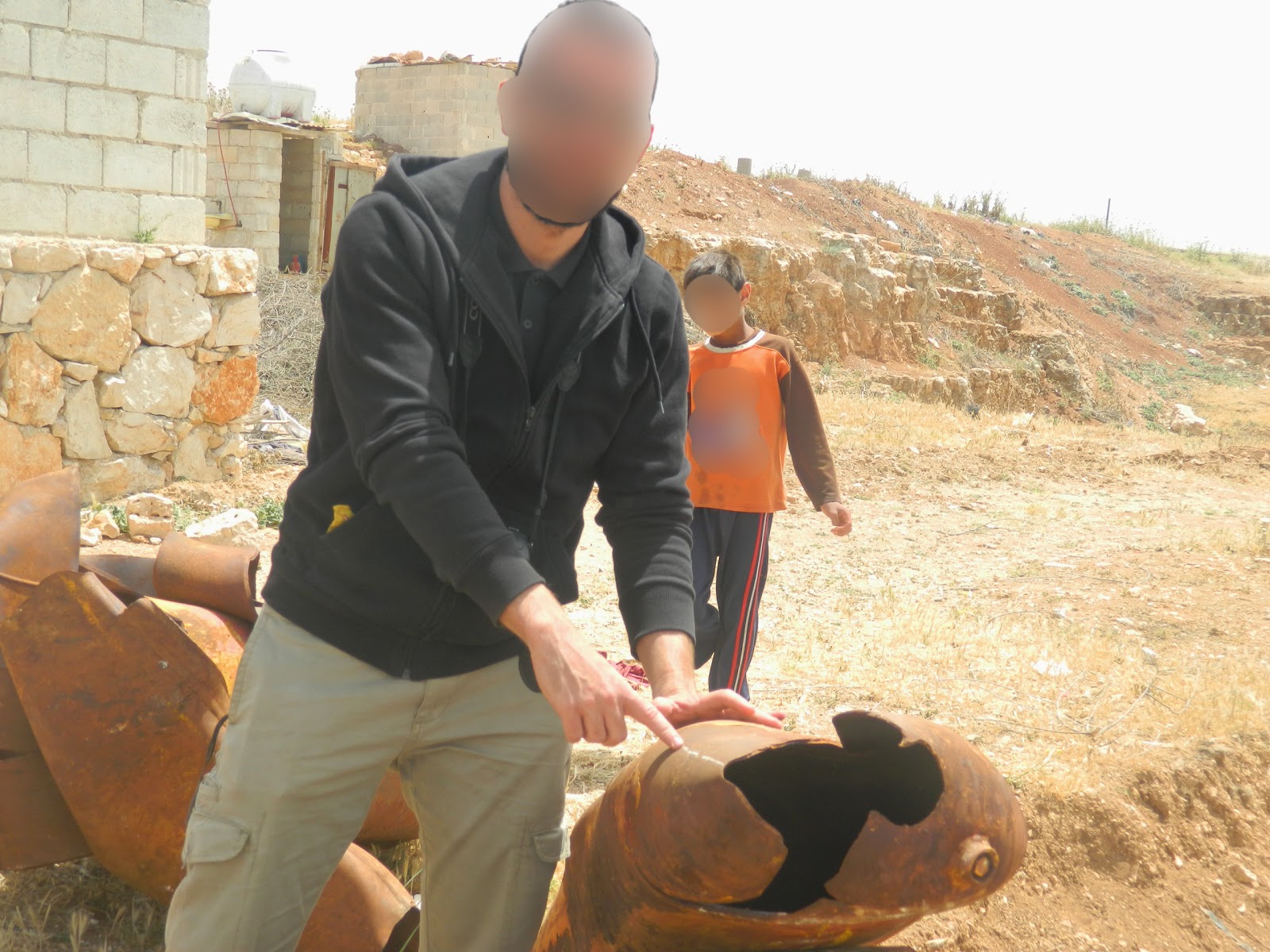 This ensures a minimum amount of gas is destroyed in the explosion, and shows more thought went into the design of these bombs than just throwing a gas cylinder into a barrel bomb. Images from the attacks also showed the chemical symbol for chlorine on the gas cylinders used, with locals reporting the strong smell of chlorine, and following investigations into the attacks the OPCW concluded “with a high degree of confidence” that chlorine was used three villages in April 2014, affecting between 350 and 500 people and killing 13.

Despite the OPCW’s report, and an ever increasing body of evidence of their use, chemical barrel bomb attacks are still being reported in Syria, and while the world does nothing to stop them it seems, along with explosive barrel bomb attacks, they’ll continue.