The Mosque of Umm

In October 2014, a Chechen woman living in the Netherlands kidnapped two of her children and fled to territory controlled by the Islamic State. Little is known about the fate of the children or their mother, who has been given the pseudonym “Umm” by Dutch media, but the woman has reportedly told relatives and friends on social media that she now lives in Raqqa, the Islamic State stronghold, and posted a photograph that reveals her possible location. The photograph, which was allegedly taken from the woman’s “backyard” and claimed to have been of “Raqqa,” shows what appears to be a minaret and communications tower. At the request of a Dutch newspaper, the Bellingcat team attempted to geolocate the photograph. This photo was uploaded by “Umm,” the mother of the abducted children. It was claimed to have been taken in Raqqa.

Because the information provided about the photograph indicated that it may have been taken in Raqqa, the Bellingcat team searched for imagery of mosques in Raqqa to find matching minarets. An image found on Twitter showed a promising match: Further searches provided more imagery of the same mosque, which is not located in the city of Raqqa, but in Raqqa province, near the Turkish border in a town called Tal Abyad (تل أبيض‎). The same town is also said to be the last location where three British schoolgirls who traveled to Syria were last seen, according to The Telegraph, citing Turkish intelligence sources. The mosque in the picture, as shown by the Arabic calligraphy on the sign at the entrance, has been renamed by the Islamic State after Osama bin Laden. The photo above, taken in daylight, provides further reason to believe that this could be the same minaret, as many of the visible details match. 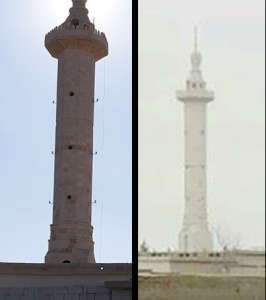 Another important structure visible in the original picture is a communication tower. Incidentally, The Telegraph article mentioned above includes a photograph of the aftermath of an airstrike on Tal Abyad where such a tower is visible; it also closely resembles the one seen in the original photo. A YouTube video from 2012 shows both the minaret and the communications tower together in a wide shot. Satellite imagery shows that the two structures are indeed near each other. 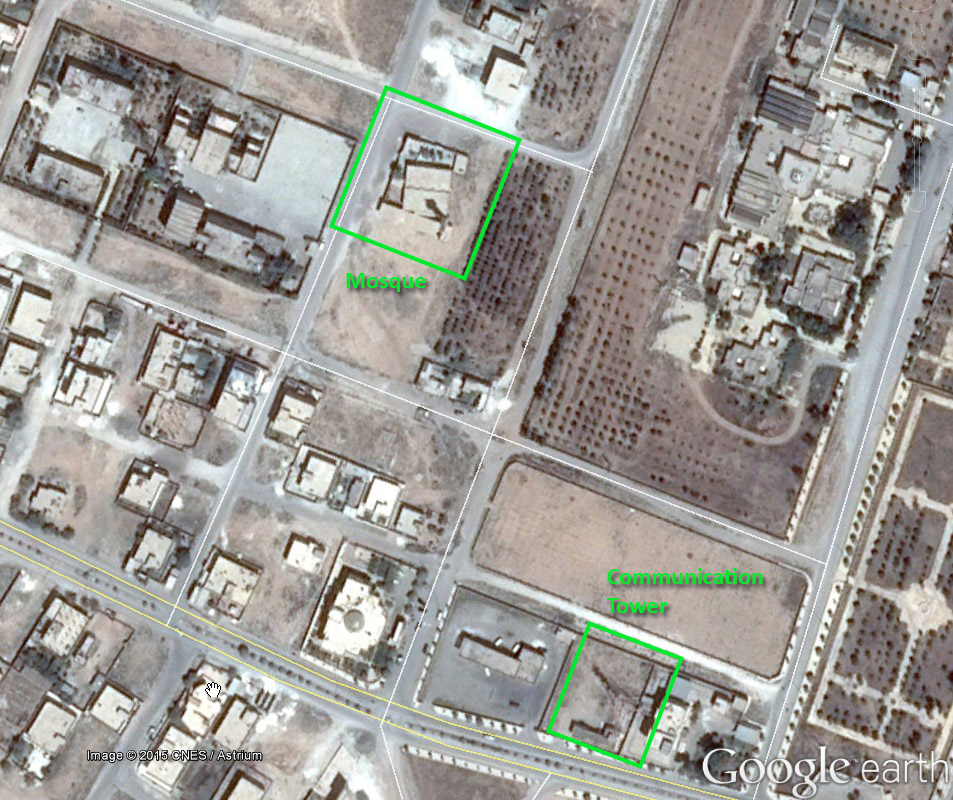 Reorienting the image, we can also see that the following picture of the mosque and satellite imagery both show trees within the perimeter and that the structures line up.

With this information, we can be reasonably certain that we have the correct area narrowed down. Next, we can ascertain the approximate location of the camera by aligning the elements in the photograph. In the original picture, we can see that the minaret appears closer to the camera, while the communication tower seems to be farther away from the camera, to the right of the minaret. For the landmarks to orient in this manner, the photograph would have to have been taken to northwest of the mosque.

To further narrow down the possible area where the photo may have been taken, there’s another feature in the original photo that can be used: the light post between the minaret and the communication tower. Unfortunately, the Bellingcat team hasn’t been able to find additional ground imagery from this area, so we must use satellite imagery to match the remaining features. Examining the available satellite imagery in the area provides one possible match for a light post in the courtyard of a building complex. From there, the yellow line is used as a guide to line up the visible trees and buildings in the original photo with the satellite image, so that the tree would appear immediately to the right of the light post. 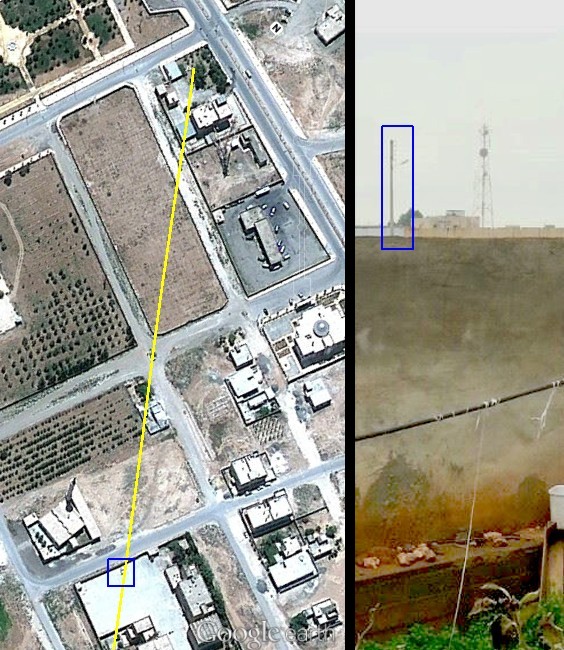 The other feature of the photograph that we can try to line up is the visible corner of the mosque’s perimeter with the base of the minaret.

By using these features, we get the following result, with a possible camera location near the point where the lines intersect. 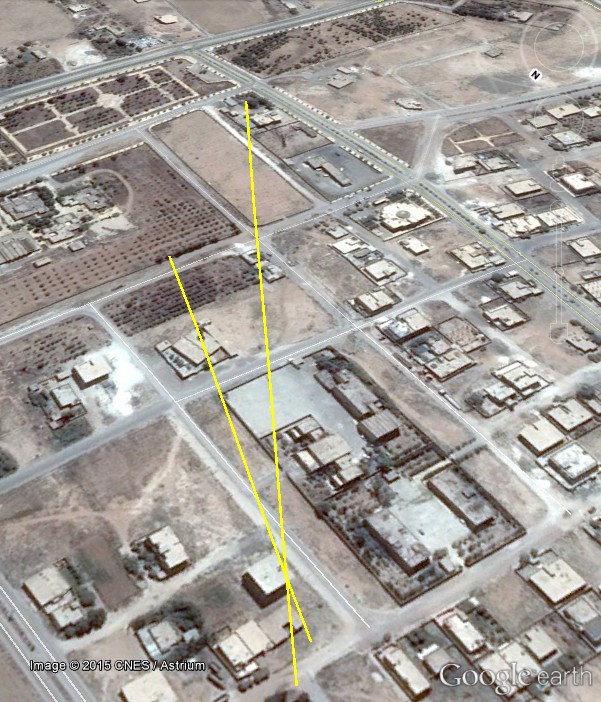 To seek additional confirmation that this is the location where the photo was taken, we created in Google Earth a rough 3D representation of key structures in the viewing area with guesstimated heights in order to validate that the structures could align in this way. While there are inaccuracies in the approach due to the multiple unknown variables at play (e.g., height of the structures, height of the camera) and possible inaccuracy in model structure placement, it does further support our assumption that the picture was likely taken from one of the buildings in this area.