Russia’s intervention in the Syrian Civil War has been controversial to say the least. For instance, Russia has denied bombing hospitals and clinics in rebel held parts of Syria and then blamed the US for the bombings despite evidence to the contrary. Adding to the list of controversies involving the Russian intervention in Syria, in this article we will be proving that Russia intentionally bombed the US backed New Syrian Army with cluster munitions.

On June 16th, 2016 multiple airstrikes hit the New Syrian Army (NSyA) camp at the al-Tanf border crossing in Syria. These airstrikes destroyed buildings, vehicles and equipment. 2 NSyA fighters died and many more were injured in the airstrikes. The New Syrian Army is a key part of the US government’s “Train and Equip” program which was set up to arm rebel groups to fight ISIS. New Syrian Army fighters are vetted by the US and Jordan to ensure that they are not extremists. Furthermore, they are required to sign a document pledging to only fight ISIS and not the Syrian government. Several hundred kilometers from the nearest government front line, the NSyA has never fought any group other than ISIS. Thus the airstrikes that hit the New Syrian Army on June 16th only assisted ISIS on the ground. This would be a direct contradiction of Russia’s stated goal of defeating ISIS.

While the US government and most independent media sources have stated that Russia is responsible for the airstrikes, we can use photographic evidence to conclusively show that this is the case. The New Syrian Army released multiple photos of the bombs that were used in the airstrike. We can identify the type of bomb used by examining the photos and thus determine if Russia is responsible for the airstrike. First off, the bombs used were clearly cluster bombs as multiple unexploded cluster bomblets can be seen scattered around al-Tanf. 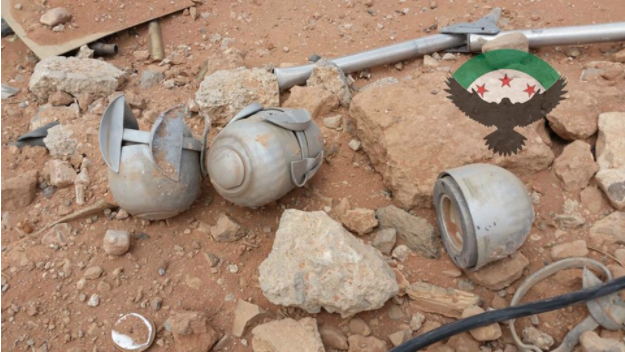 Now that we have determined that NSyA was indeed hit with cluster bombs on June 16th, we can identify which specific bomb model was dropped. Examining the tail fin we can see that these bombs are Russian RBK pattern cluster bombs. Looking at the writing on the unexploded bomblets we can see that these are AO-2.5 RTM bomblets. This conclusively proves that the bombs dropped on the NSyA are none other than Russian/Soviet manufactured RBK-500 AO-2.5 RTM cluster bombs. 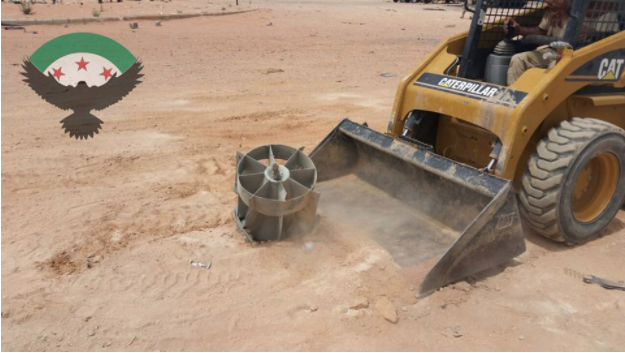 Thanks to the work by the Conflict Intelligence Team, we know that RBK-500 AO-2.5 RTM cluster bombs are present at Hmeymim airbase in Latakia Governorate, Syria. While it is possible that Russia gave those bombs to the Syrian Airforce, neither the US or the Russian government has suggested that is the case and Russia’s response to the bombing does not blame the Syrian government. Since we can rule out that the Syrian government bombed ISIS, Russia is the only other alternative. Russia thus used cluster bombs to hit the New Syrian Army’s al-Tanf camp. Interestingly, this evidence is in direct contradiction to the Russian government’s statement that they do not use cluster munitions and their statement that they do not have cluster munitions at Hmeymim airbase. 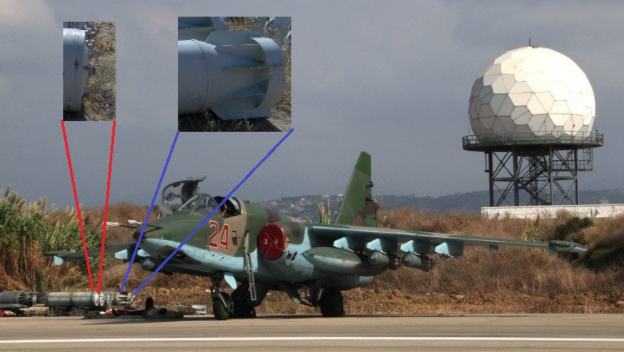 Did Russia Know the New Syrian Army Operated in al-Tanf?

After Russian jets struck the New Syrian Army’s al-Tanf camp with cluster bombs, the US proceeded to scramble two F/A-18 fighter jets to protect the New Syrian Army. When the American F/A-18 jets returned to refuel, Russian jets launched a second sortie striking the New Syrian Army again. In the aftermath the US contacted the Russian government to discuss why they had bombed a US backed group. Russia claimed that they had not been informed that a US supported group was operating in that region and that it was 300 kilometers away from the nearest ceasefire zone.

There are multiple issues with this statement. Since the Russian Defense ministry has not published a map of ceasefire zones in Syria any time recently, it is impossible to determine if al-Tanf is indeed more than 300km from a ceasefire zone. Furthermore, the NSyA does not share a border with the Syrian Government and only fights ISIS, thus it should de facto included in a ceasefire zone.

In either case, the Russian government claims they did not know the US backed New Syrian Army operated in this area. There are two issues with this claim, if we accept that Russia did not know that al-Tanf was controlled by a US backed group, then they simply decided to bomb a random outpost in the Syrian desert without having any idea of what was there. A more likely answer is that Russia deliberately bombed the New Syrian Army knowing that they were a US backed group.

The Russian MoD’s Claims vs Reality

Russia’s bombing of the New Syrian Army basically did the exact opposite of Russia’s stated goal of defeating terrorist groups. ISIS is the only group that directly benefits when the New Syrian Army is attacked. Indeed, some ISIS supporters on Facebook rejoiced after the Russian airstrike on the New Syrian Army. On top of indirectly helping ISIS through this airstrike, the Russian Air Force used cluster munitions in the attack. Russia denied that they used cluster bombs in Syria and denied that they even have cluster bombs in Hmeymim Airbase, Syria. Both of these claims are 100% false. Russia also stated that they did not know that the New Syrian Army operated at al-Tanf, we have shown how this is unlikely due to the NSyA’s presence at al-Tanf being public knowledge since early March. Essentially, Russia’s words and actions do not match up. Russia should not mislead its citizens and the rest of the world by lying about their actions in Syria. 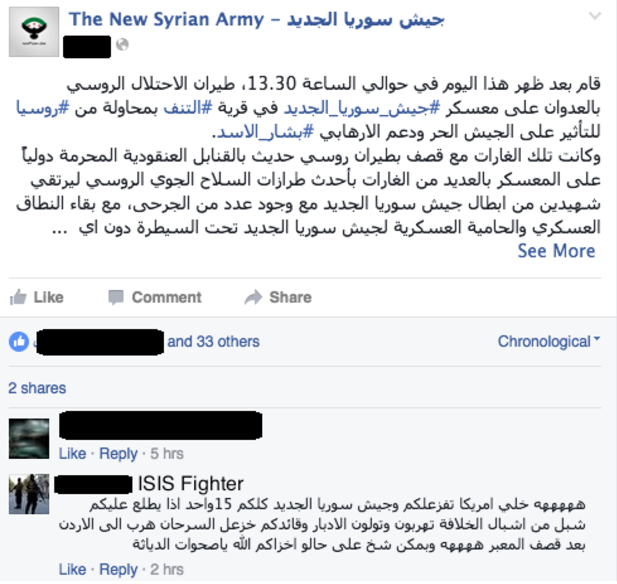