From Russia with Love, Syria's AK-74Ms 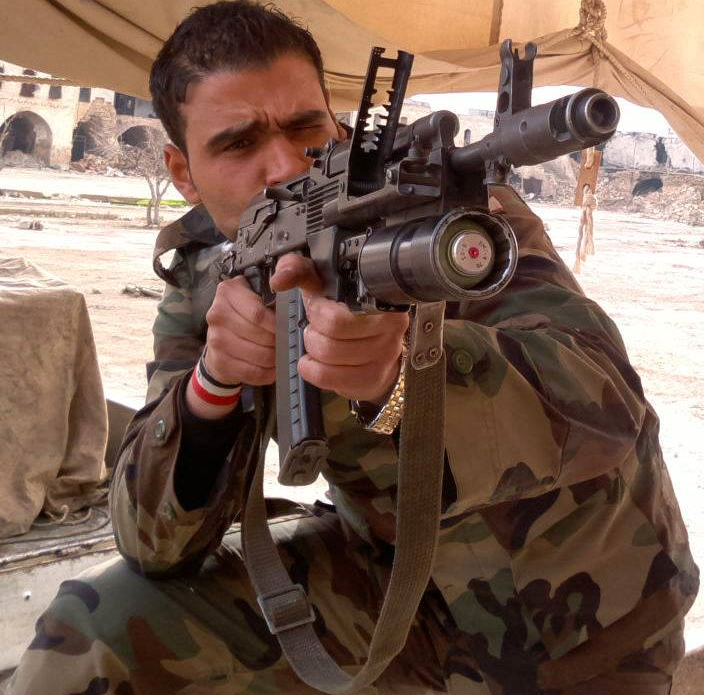 The AK-74M has slowly earned its place as the most popular assault rifle currently in use with the various factions fighting for control over Syria. While originally acquired only in small numbers by Syria, recent deliveries ensured a now solid presence of this rifle in the war-torn country. The AK-74M is not only popular with forces of the Syrian Arab Army and the Republican Guard, but also with various other groups fighting for control of the country.

Syia acquired its first batch of AK-74Ms in the late 90s, albeit in very small numbers. This very first batch was believed to have been part of a deal struck with Russia in 1996, which would renew the military and technological cooperation with Russia after this had dwindled due to the collapse of the Soviet Union.

The deal envisaged the delivery of a wide selection of small arms, anti-tank missiles, night vision equipment and ammunition for weaponry already in use by Syria. Included in the package were large numbers of AKS-74Us, smaller numbers of AK-74Ms, RPG-29s, PG-7VR warheads for the RPG-7 but also 9M113M Konkurs anti-tank guided missiles (ATGMs) and even 9M117M Bastion gun-launched anti-tank guided missiles for use by Syria’s at that point recently upgraded T-55MVs.

Disagreements over Syria’s insistence on lower prices and extended payment schemes for future purchases and its debt to Russia led to the failure of a deepened relationship between the two countries. Nonetheless, much of the ordered weaponry did ultimately reach Syria. 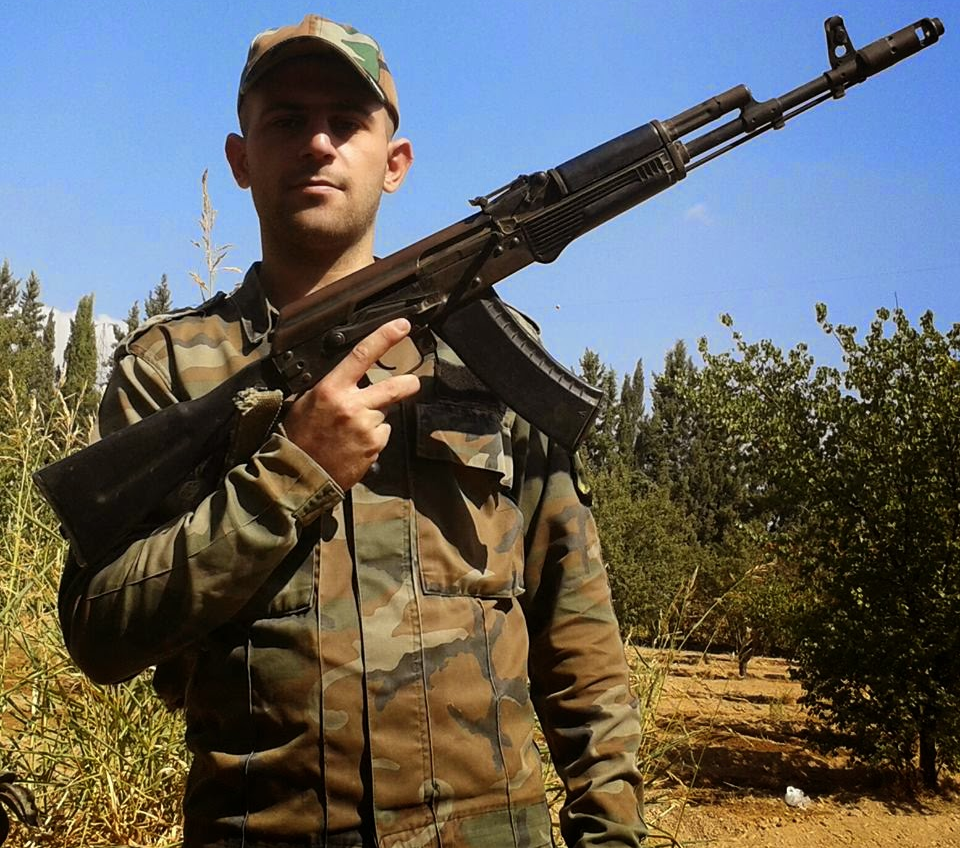 The first public appearance of the AK-74M in was in 2000, when it was spotted being carried by a guard in front of the National Progressive Front (NPF) headquarters in Damascus. This AK-74M belonged to the first batch, and these along with AKS-74Us were mainly distributed to special units and personnel guarding places of high value. The amount of AK-74Ms was still too small to allow a wider distribution.

The second attempt to acquire AK-74Ms (at a more ambitious scale this time) took place in the years leading up to the Syrian Civil War. The Syrian Arab Army (SAA) launched an ambitious modernisation programme aimed at improving the protection and firepower of a part of its infantry force during this time. 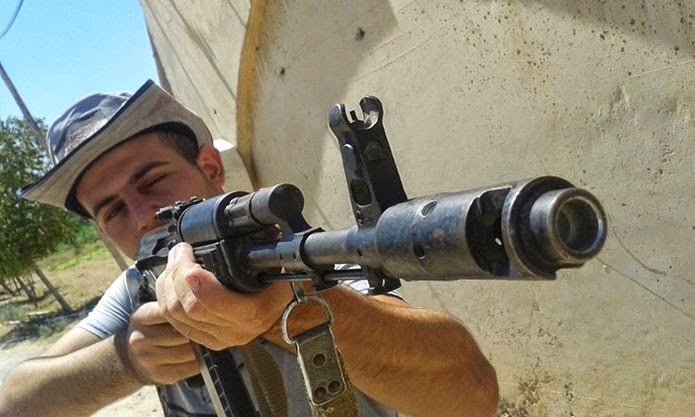 The SAA tested two assault rifles as part of this future soldier programme in 2008, the AK-74M and the Iranian KH-2002 ‘Kheybar’, chambered in 5.45×39mm and 5.56×45mm respectively. For this purpose, the Iranian Defense Industries Organisation (IDIO or DIO) sent ten KH-2002s along with several representatives to Syria.

All but two of the ten KH-2002s malfunctioned during the tests, resulting in a chuckle from the Syrian side at the expense of the ashamed Iranian representatives. Unsurprisingly, the AK-74M was thus declared the winner of the ‘competition’

After Uruguay’s interest in the KH-2002 also vanished, the programme was cancelled in 2012. The failure to attract any export orders and a lack of interest from the Iranian Army to purchase the rifle doomed one of the few serious attempts to design and produce an indigenous assault rifle in Iran. The programme also saw the manufacturing of two types of ‘new’ camouflage patterns, both exact copies of the US M81 woodland camouflage pattern, which is also worn by fighters of Hizbullah. Furthermore, large numbers of bulletproof vests and helmets were ordered and delivered from China, and a limited number of night vision devices for special forces were received from an unknown source. The soldier seen below depicts how the final product would have looked like. Note that his AK-74M comes equipped with an Alpha-7115 night laser sight and a GP-30M under-barrel grenade launcher. Russia continues to prove it’s a staunch and reliable supporter of the Assad regime, and the Civil War evidently serves as no deterrent for Russia to continue delivering anything from small arms to tanks, multiple rocket launchers and even spare parts for the Syrian Arab Air Force (SyAAF). To no one’s surprise, several large batches of AK-74Ms also found their way onboard Russian Navy Ropucha-class landing ships to Syria in the past years. 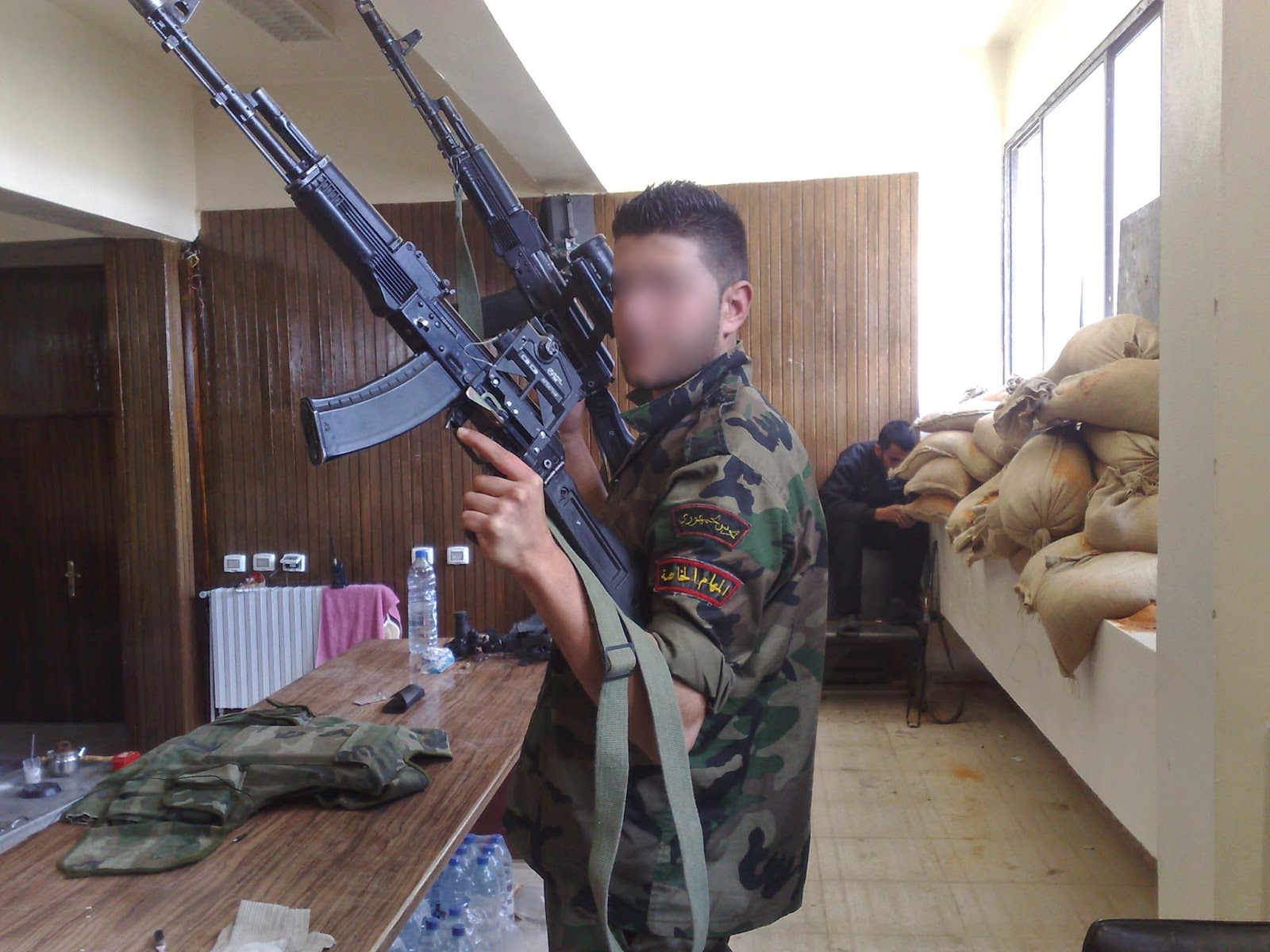 Once arrived in Syria, these batches allowed for a wide distribution of the AK-74M within the Syrian Arab Army and, to a lesser extent, the Republican Guard. The National Defence Force (NDF) still has to make do with the old AK-47, Type-56 and AKM however, although Western firearms or ‘pimped’ AKs acquired via the black market in Lebanon are also available.

The Republican Guard’s 104th Brigade, under the command of Brigadier General Issam Zahreddine, received a sizeable batch of AK-74Ms and AKS-74Us when heading off to Deir ez-Zor to take on the fighters of the Islamic State. 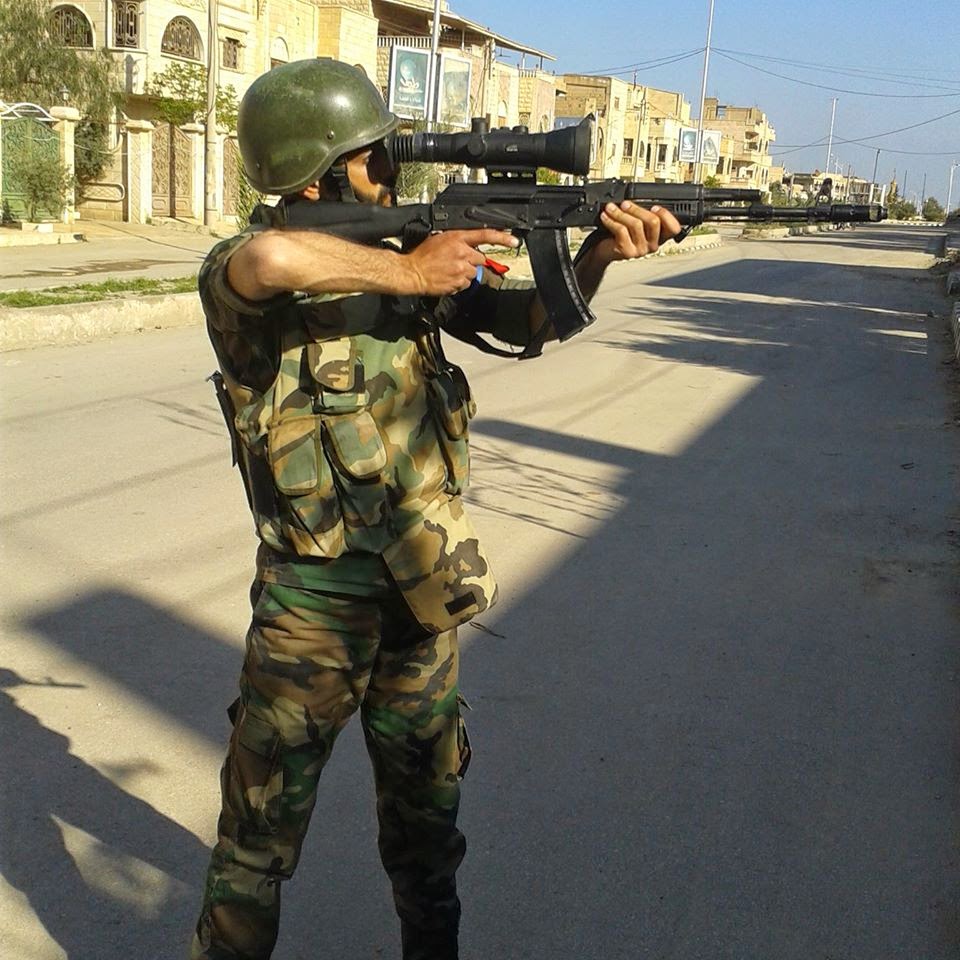 The Islamic State is the largest AK-74M operator of the groups fighting for control over Syria. Surprisingly, and contrary to the usual weapons flow which mainly sees captured M16s and M4 rifles and carbines transferred to Syria from Iraq, numerous AK-74Ms also ended up with fighters of the Islamic State in Iraq. The AK-74M itself is a modernised variant of the AK-74, and entered production in 1991. It not only provides more versatility compared to the AK-74, but is also lighter and features a new synthetic side-folding stock. This opposed to the earlier AKS and AKMS, which both use the typical under-folding stock. 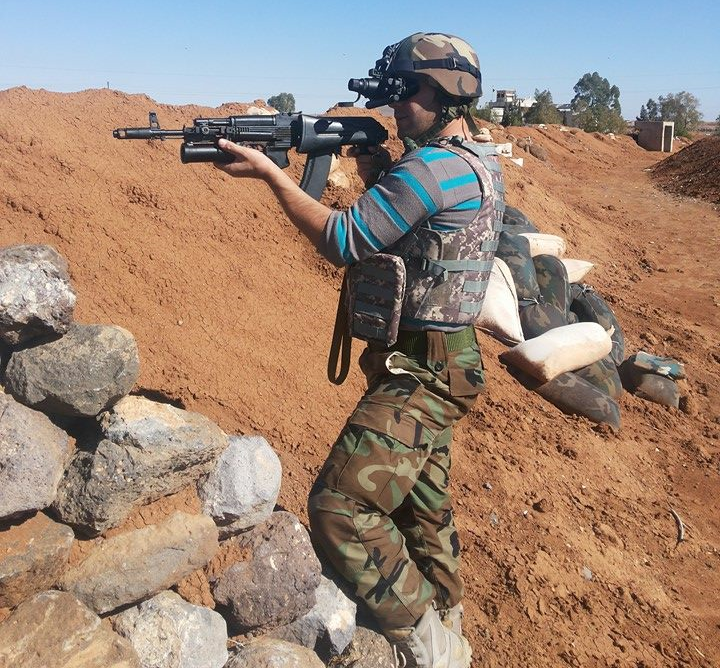 The quantity of optical sights and under-barrel grenade launchers received by Syria in the past years was large enough to allow installment on numerous AK-47s, Type-56s and AKMs. 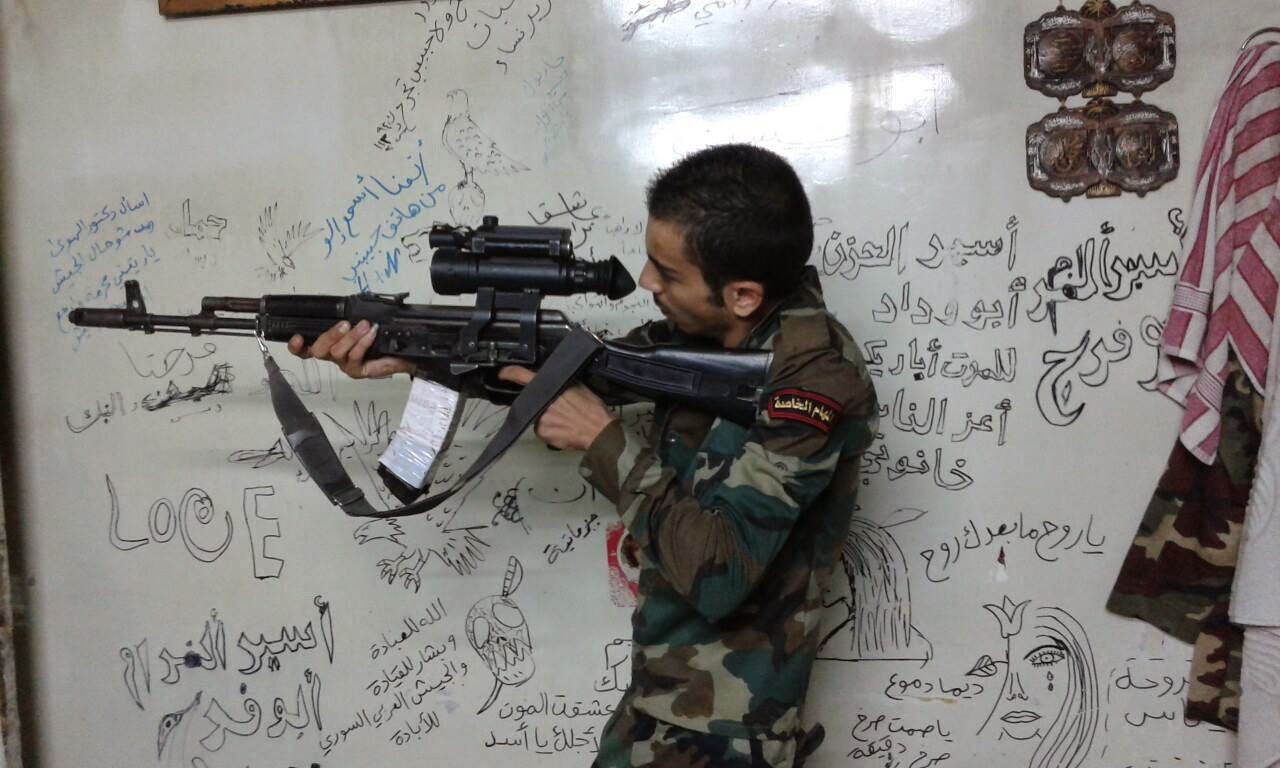 A number of AK-74Ms were also equipped with NSPU night vision sights. Only a limited number of such sights are available in Syria, and they have seen sporadic use throughout the course of the Civil War. 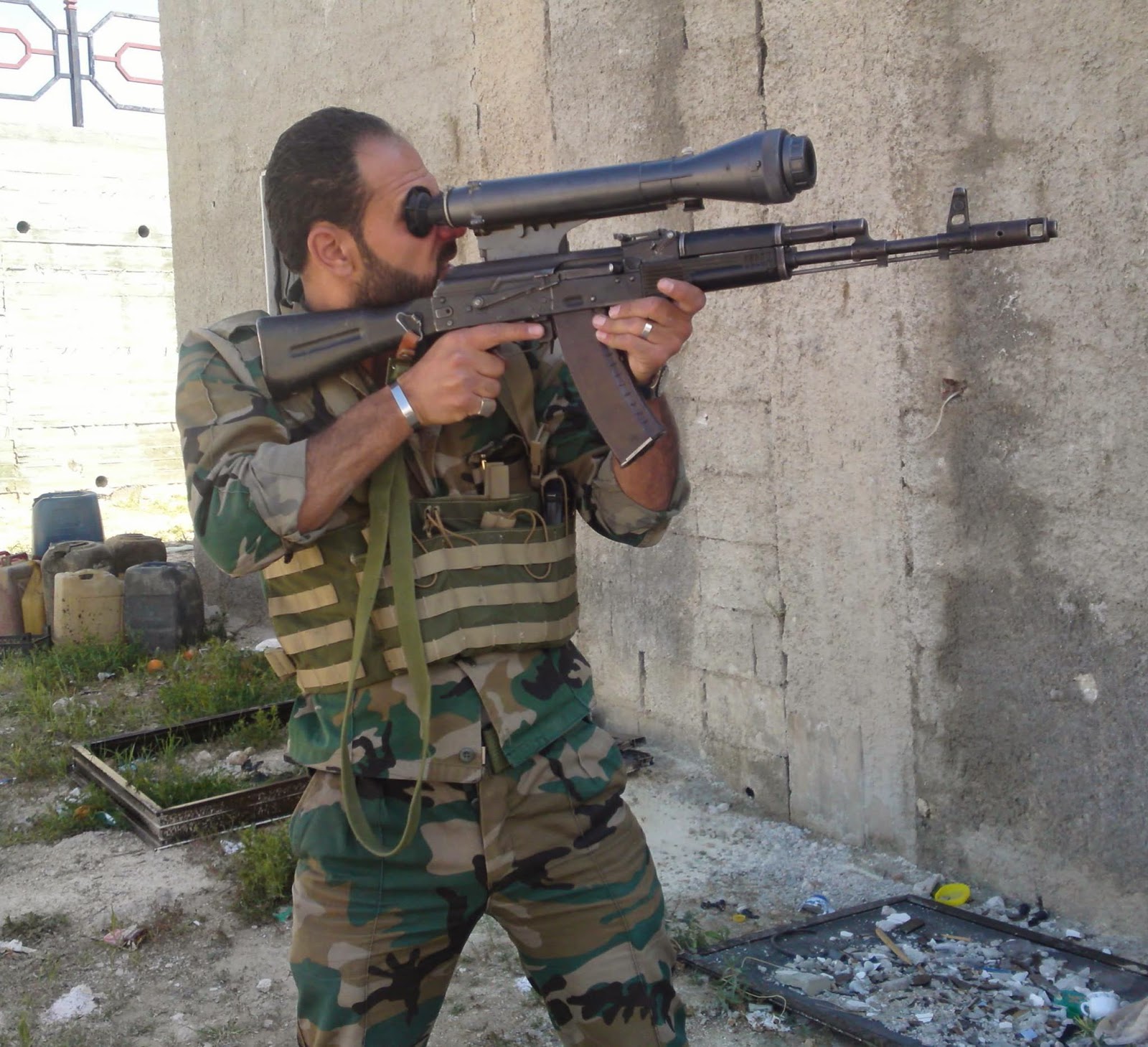 The AK-74M can also be equipped with a single-shot 40mm under-barrel grenade launcher, two types of which were acquired by the Syrian Arab Army to date: the GP-25 and the GP-30M. The first is intended for use on older generation rifles while the GP-30M was designed for more modern assault rifles such as the AK-74M or AK-103.

The GP-30M can engage targets in a range of 100m to 400m and is capable of firing fragmentation grenades and smoke grenades. It is aimed by the means of a quadrant sight. The AK-74M: A rifle both dreaded and loved on the Syrian battlefield, and sure to continue to play a large role in the course of the war now that peace seems ever more distant.