The DIY Weapons Of The Syrian Rebels

Over the past three years of conflict in Syria, the Syrian opposition has created a range of improvised weapons, ranging from pipe-bombs to huge mortars. Here’s a look at some of the creations that have made their mark on the conflict so far.

One of the longest serving and most widely used DIY weapon in the Syrian opposition’s arsenal has to be DIY rockets. These have come in a variety of shapes and sizes, with opposition battalions across Syria coming up with their own variations. Sugar based rocket fuel has been a popular choice for the rockets, with warheads filled with DIY explosives or explosives harvested for unexploded munitions. The effectiveness of these inaccurate weapons with small explosive payloads is questionable, but there’s no denying that they have become a popular weapon with the opposition, and have been used in their thousands throughout the conflict.

Challenging DIY rockets for the most common DIY weapon used by the Syrian opposition are DIY mortars, with large numbers being produced in opposition workshops across the country, supplementing their supply of conventional mortars captured from government forces and provided by foreign governments. Some recently examples of DIY mortars have even included trucks mounted with rows of mortars, allowing for a volley of mortars to be launched, before rapidly retreating before counter-fire is returned.

The Syrian opposition has also made the most of equipment captured from government bases in more non-traditional roles. Rocket pods, intended to be carried by jets and helicopters, have been attached to the back of trucks and used as surface-to-surface weapons. Videos from overrun government airfields have also shown that government forces also re-purposed rocket pods in the same way during the months long sieges that preceding the capture of the bases.

For the Syrian opposition groups fighting in street battles in towns and cities across Syria, DIY grenades of various types have become a popular choice. From pipe-bombs and Molotov cocktails to carefully machined hand grenades, these improvised weapons have become a regular feature of urban combat.

The unwieldiness of DIY catapults may have led to this next innovation. In late 2012 videos started appearing showing shotguns with cups attached to the end of the barrels, into which were placed pipe-bombs and other improvised explosive devices, which was then launched using a modified shotgun cartridge. This innovation quickly caught on, rapidly spreading beyond the group that originally came up with the idea, and these DIY grenades launchers are now a popular weapon among opposition fighters.

While there’s been many different types of DIY weapons produced, from Molotov cocktail launchers to DIY 122mm rocket launchers, the most impressive weapon to have been developed by the opposition has to be the weapon they’ve named the “Hell Cannon”. First produced in May 2013 by the Ahrar al-Shamal brigade, part of the major Islamist group Liwa al-Tawhid, the Hell Cannon has been widely adopted by other opposition groups. The Hell Cannon is a type of mortar, with the projectile being a repurposed gas cylinder, filled with explosives, and mounted onto a rod that’s then inserted into the mortar. Despite its short range, it’s become a popular weapon due its power, and it’s relative ease of manufacture. Variants have also appear, some using custom warheads instead of gas cylinders, others where the mortar is large enough to fit the gas cylinder inside, even one with the cannon mounted to a digger’s shovel, and it seems the Hell Cannon will continue to be a popular addition to the opposition’s DIY arsenal. 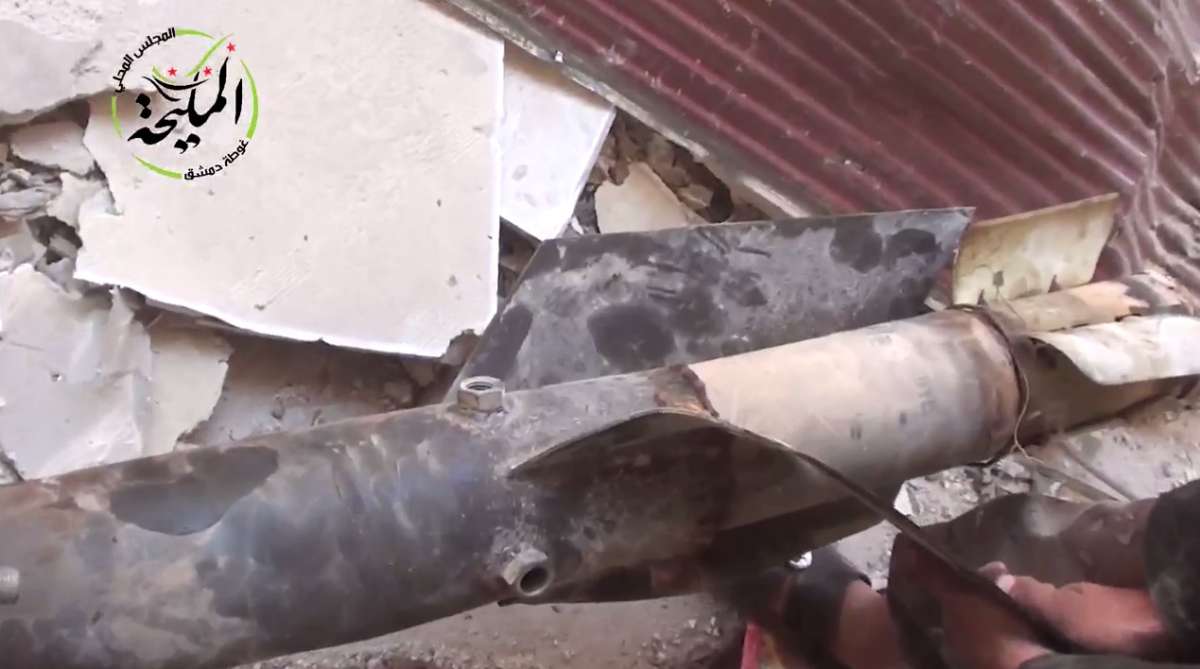