At its most basic, the Volcano rocket is a standard artillery rocket with the warhead removed and a much larger warhead added.  The larger types of Volcano rockets seen in the conflict have followed a consistent design, and appear to be have been used by the Syrian military since late 2012.

Recently, the unexploded remains of a new type of rocket with a design similar to the Volcano rocket has begun appearing in Damascus, with two unexploded examples recorded by opposition members in May and June

While these follow the same basic concept of the Volcano rocket the details of the design are quite different from that of the types of Volcano rockets seen before.  Below we see the tail section of the rocket from the June video This appears to be a 122mm rocket, as fired by the BM-21 Grad, inserted into a tail fin assembly connected to the warhead.  Empty bolt holes are visible, and in the below image from the May video one of the bolts can be seen

It’s unclear what the original position of the 122mm rocket would be.  In the below image the May rocket is shown on the left, with the June rocket on the right. Explosive Volcano rockets have one hole on the base of the warhead, and this appears to be used for a type of fuze, so it’s possible the same system is used in this new type of rocket. However, the images of these holes on the new type of rocket are currently not clear enough to ascertain their purpose.

The front of the warhead is only briefly visible

Two lug holes attached to the end are being use to drag the rocket along the ground.  What their original purpose were is unclear, maybe they held something onto the front of the rocket, maybe they were used to position the rocket, but currently it’s unknown.  There’s also the assembly in the middle, which may possibly be the position of the fuze, but there’s not enough information to be certain of that.

The following photographs were posted online showing the rockets during their production, reportedly by groups in Aleppo These photos appear to confirm some of the features described above, and that the 122mm rockets are positioned so their tail fins are behind the additional tail fins welded to the rockets cover. 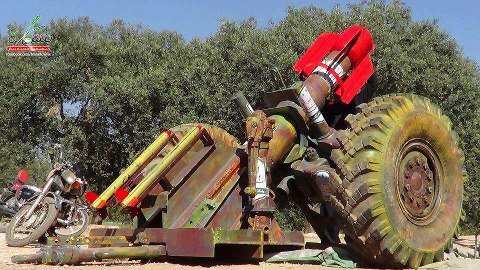 The DIY Weapons Of The Syrian Rebels