On April 27, 2019, at around 11:30 a.m. local time, a young man with a semi-automatic rifle walked into the Chabad of Poway Synagogue in Poway, California. He opened fire, killing one worshipper and wounding three others. In the hours since the shooting, a manifesto, believed to be written by the shooter, began circulating online. Evidence has also surfaced that, like the Christchurch Mosque shooter, this killer began his rampage with a post on 8chan’s /pol/ board.

Although both of these attacks may seem different, since they targeted worshippers of different faiths, both shooters were united by the same fascist ideology. They were also both radicalized in the same place: 8chan’s /pol/ board.

This has been corroborated by posts on the board itself, where “anons,” as the posters call themselves, recirculated the shooter’s since-deleted post. In it, the alleged shooter claims to have been “lurking” on the site for a year and a half. He includes a link to a livestream of his rampage — which thankfully does not appear to have worked — and he also includes a pastebin link to his manifesto.

The very first response to his announcement was another anon cheering him on and telling him to “get the high score,” AKA, kill a huge number of people.

As I noted after the Christchurch shooting, this shooter’s manifesto is filled with “shitposting” — internet in-jokes meant to distract authorities and the media and make 8chan’s /pol/ board seem less threatening, and less worthy of serious concern. The fact that this is the second /pol/-related shooting in a house of worship in slightly more than a month should be enough to explain that this is false.

8chan is a large website, which includes a number of different discussion groups about everything from anime to left-wing politics. /pol/ is one particularly active board on the website, and it is best described as a gathering place for extremely online neo-Nazis.

The overarching goal of /pol/, held by most of its members, is to radicalize their fellow anons to “real-life effortposting,” i.e. acts of violence in the physical world. This goal is well embodied by a post I found in a discussion of the Poway Synagogue shooting.

I’ve browsed /pol/ on an almost daily basis since the Christchurch shooting. It has not been difficult to find calls for violence. On Monday, March 25 of this year, I ran across evidence of anons translating the Christchurch shooter’s manifesto into other languages in an attempt to inspire more shootings across the globe.

This tactic can work, and today’s shooting is proof. The Poway Synagogue shooter directly cited the Christchurch shooter as his inspiration, saying he decided to carry out his attack roughly two weeks after that shooting. On /pol/, many anons refer to the Christchurch shooter, Brenton Tarrant, as “Saint Tarrant,” complete with medieval-inspired iconography.

In addition to talk of inspiring and carrying out mass shootings, many anons engage in what is called “siege-posting.” This is a reference to the book Siege, which is a collection of writings from American neo-Nazi James Mason. Siege was a major inspiration for the terrorist group Atomwaffen, among others. It urges autonomous terror attacks by individuals as a way to bring about the fragmentation and eventual destruction of American society. The goal is to spark a civil war that will allow for the violent realization of white nationalist/neo-Nazi goals.

Many anons on 8chan mock “siegeposting.” Others spend hours in detailed discussions about how to acquire explosives and artillery in order to better participate in what they believe to be the coming race war.

In his manifesto, the Poway Synagogue shooter, much like the Christchurch shooter, noted that he hoped his attack would inspire new gun control measures which would in turn spark a civil war.

The Poway Synagogue shooter claims that Felix Kjellberg, the YouTuber PewDiePie, funded his murderous “operation.” This is an obvious lie, and appears to be a way for this shooter to tie himself to the Christchurch shooter, since that person began his rampage by saying “Subscribe to PewDiePie.”

The sheer density of in-jokes and references to obscure aspects of “channer” culture in both manifestos leaves one with the question: What can we take seriously? 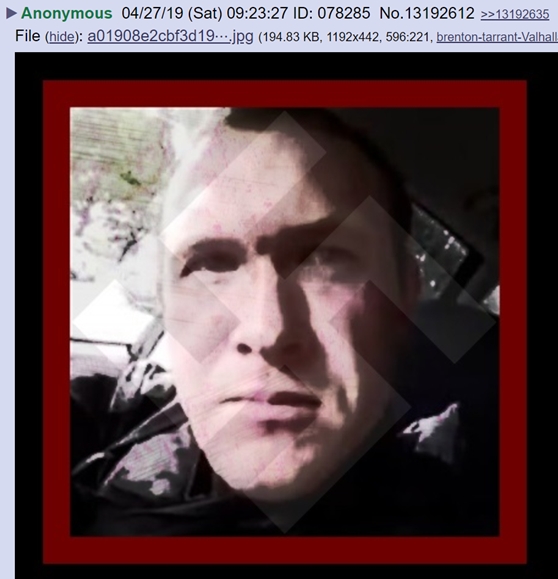 This is a cropped version of a jpg of Tarrant I found on /pol/. The original included a quote from the Christchurch shooter, which I’ve removed. Nazism is the constant background noise on /pol/. The Poway Synagogue shooter’s manifesto was peppered with dumb jokes, but also included lengthy, detailed and deadly serious anti-Semitic raving. Conversations on /pol/ tend to go the same way.

In the wake of the Christchurch shooting, I was interviewed about 8chan by ABC Australia. The documentary they produced became a topic of discussion on /pol/. Some anons attempted to deny any white supremacist or neo-Nazi leanings on their site. Their fellow anons immediately put the lie to this.

Literal Nazi propaganda is outrageously easy to find on /pol/. Some of it has been updated for the internet age, and dressed in the garb of modern ironic fascism.

But a lot of it is classic OG Nazism (original Nazism), including a thread I found on April 3 of this year, that was just a long, in-depth discussion of which translations of Mein Kampf were best.

There are, of course, numerous other topics of discussion on /pol/. When Jussie Smollett’s charges were dropped, there was predictable outrage. When the Notre Dame cathedral burned, there were instant conspiracy theories that Muslims or Jews had been behind it. But no matter what else is discussed, anti-Semitism, Islamophobia, hatred of LGBT individuals, and a desire to commit murder under the swastika are constant through-lines. 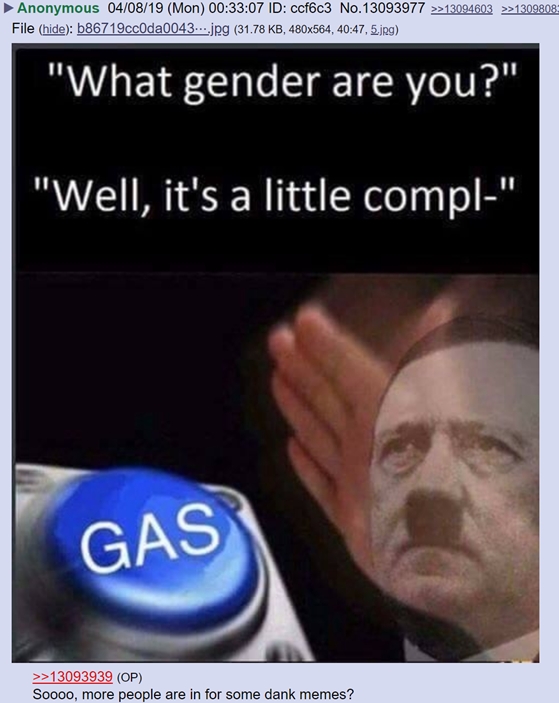 On Friday, March 29, just under a month before the Poway Synagogue shooting, I found a post from an anon who suggested several of the members should abduct a “known child sex predator who has connections to many other high level people who abuse kids.”

The first response to this idea was: “Shoot up a Synagogue. Be a hero.”

When I began looking through /pol/ right after the Poway Synagogue shooting, I came across several claims that the shootings had been a “false flag” aimed at making the message board look bad.

When Bellingcat tweeted out a warning about shitposting and the shooter’s manifesto, in the immediate wake of the attack, probable anons even commented on the Tweet in an attempt to deny that a channer had been behind the attack.

This is a recognizable pattern that occurs in the wake of any crimes committed by members of the board. While the initial response to the Christchurch shooter’s massacre thread was riotous glee, in the days after the shooting many anons began to claim the attack had been a false flag. This actually sparked significant division and debate between the members of /pol/. In the below image, a user mocks other anons for being unable to “believe something in your favor is real.” Another anon responds, “As the evidence comes out, its [sic] quite clear that this was a false flag.”

In his manifesto, the Poway Synagogue shooter even weighed in on this debate, accusing other anons who called the Christchurch and Tree of Life Synagogue shootings “false flags” to merely have been scared: “They can’t fathom that there are brave White men alive who have the willpower and courage it takes to say, ‘Fuck my life—I’m willing to sacrifice everything for the benefit of my race.’”

There is no central organization behind 8chan’s /pol/ board, and barely even any moderation. But the community acts in certain predictable ways to defend itself during times like these. The pattern is regular enough to set your watch to. For example, when the ABC Australia documentary in which I discussed 8chan came out, some anon put a 15 bitcoin “bounty” (roughly $60,000) on my head. 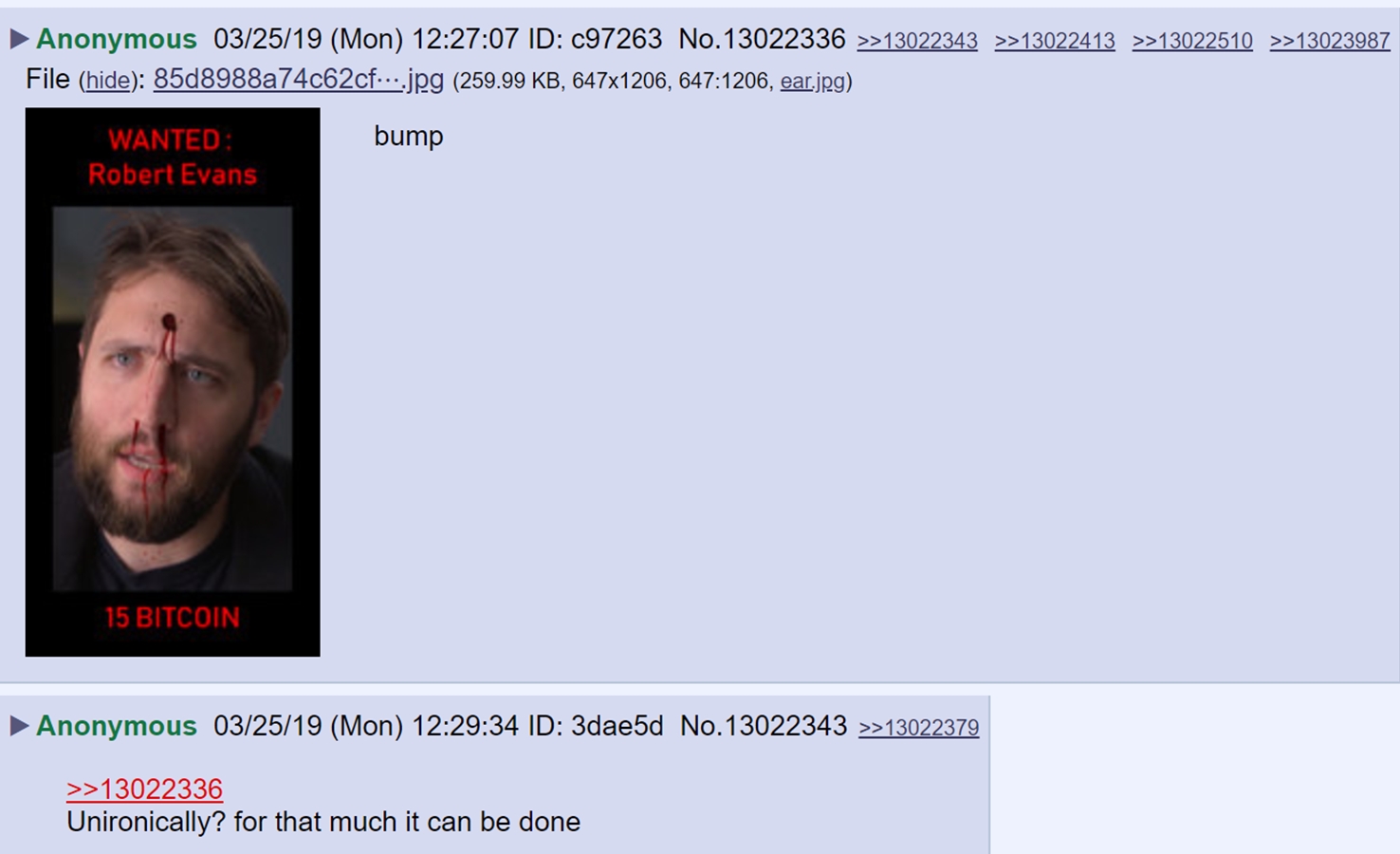 It’s entirely possible this was just a joke, but jokes on /pol/ have a nasty way of turning into real-life violence. When I became aware of this I posted about the threat on Twitter. Anons then began claiming the death threat was fake, and I’d created it myself and posted it on their message board for some uncertain purpose.

Other anons did not bother with attempting denial. One included archived links to the Christchurch shooter’s manifesto, Facebook page and massacre videos. He bragged to me that, “You can’t shut this down.”

The Poway Synagogue shooting is proof that “this” has not yet been shut down. Right now on 8chan, other anons are gleefully sharing links to this most recent shooter’s manifesto, and celebrating the fact that he succeeded in wounding a rabbi. In the coming days and weeks, the Poway Synagogue shooter will enter their pantheon of heroes, and become a “Saint” like the Christchurch shooter.

There is likely to be another shooter, another manifesto, and more cheering anons. 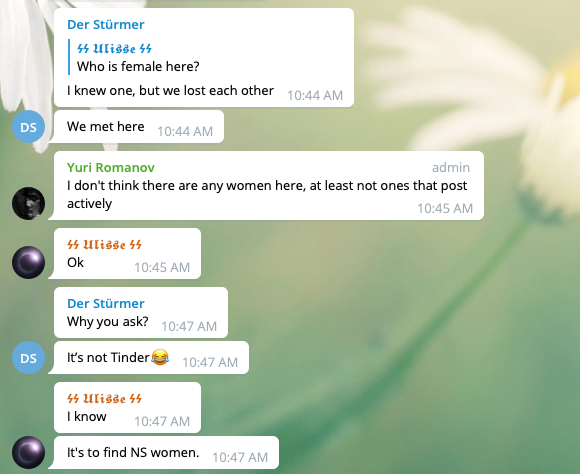 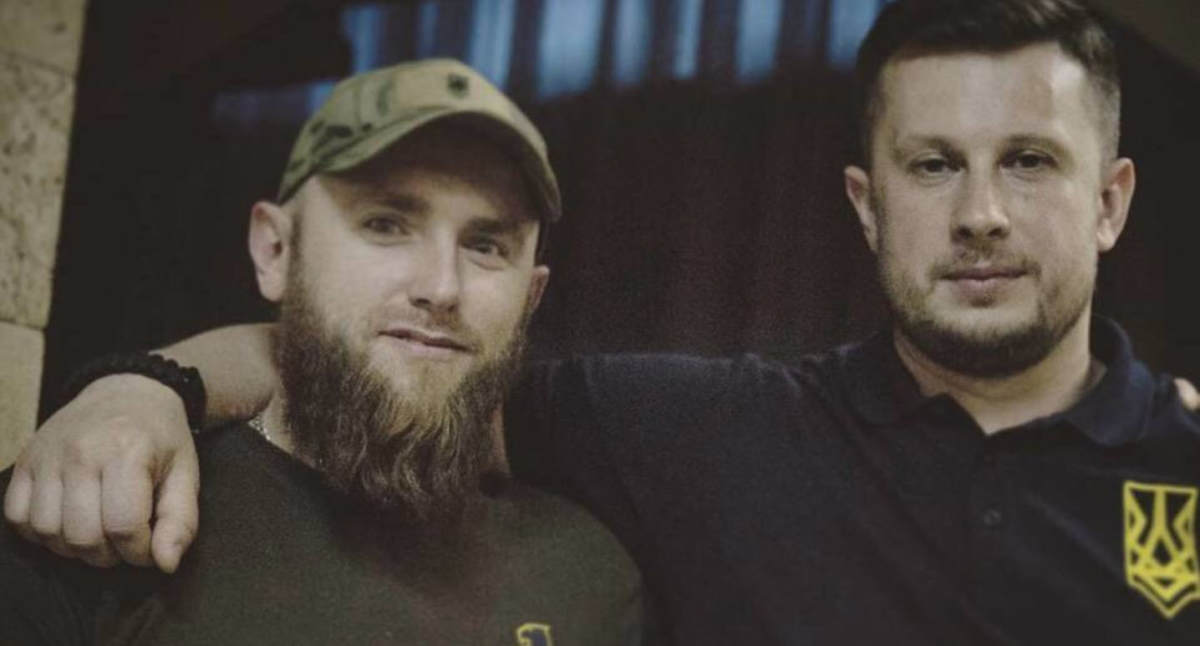 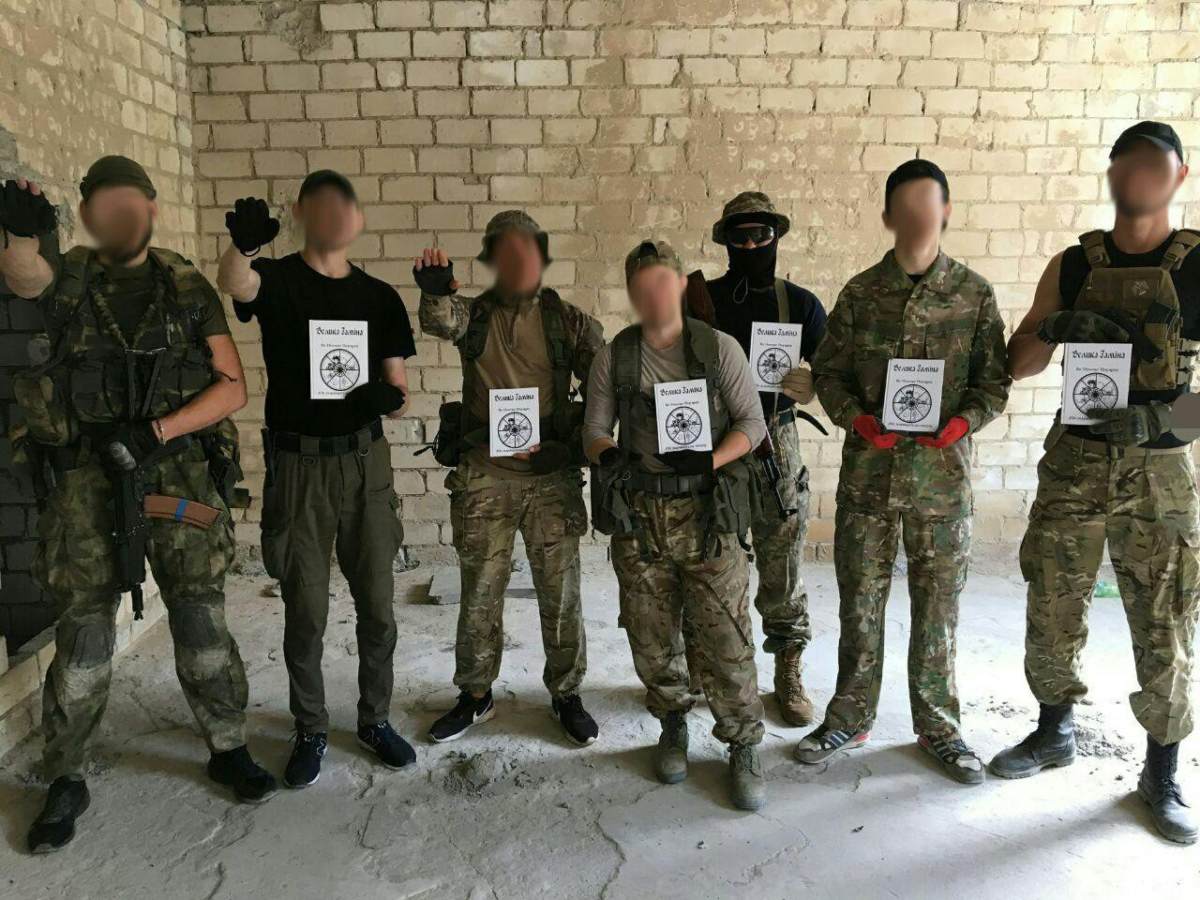