The Bombs of Caracas

During the month of July, as unrest raged around Venezuela during a constitutional crises, there were two instances of what appeared to be IEDs being used against the Venezuelan security services. Both IEDs seem to have been effective devices and were deployed in Caracas targeting the Venezuelan National Guard (GNB) and Bolivarian National Police (PNB) on the 10th and 30th July respectively. This article will examine these two blasts, verify their locations and attempt to draw as much information as possible from the context and media associated with each explosion. All times use the 24 hour clock.

Venezuela has experienced near continual civil strife since early 2014, often bearing the brunt of large demonstrations and violence. Corruption, economic mismanagement,  the plunging price of oil and violent crime have all played parts in this discontent.  The nature of governance in Venezuela has also been a cause of conflict, with President Maduro having been granted the ability to rule by decree since early 2015, which has been extended several times. After a constitutional crises was sparked in March 2017, unrest peaked in July after the government of Maduro decided to hold elections for a Constituent Assembly on 30th July. These elections were mired in accusations of vote rigging and intimidation. Throughout July, both before the elections took place and on the day of the election itself, the country was wracked by protests. During this period Caracas experienced a large number of street demonstrations, many of which used the central Altamira area as a staging ground. On 10th and 30th July explosions occurred in and next to Altamira which injured security forces and were well documented in local media. It is these explosions which we will examine.

The first instance of the use of a possible IED during the current disorder was on 10th July 2017. There are two videos associated with this event. A still from video 1, highlighting a distinctive red roof in orange, a road bend in red, and a billboard in yellow. Google Earth imagery highlighting the distinctive red roof in orange, a road bend in red, and a billboard in yellow.

The second instance of a possible IED was on 30th July 2017, during unrest related to the election of the Constituent Assembly. Image showing the second IED from a different angle. Distinctive pillars are highlighted in yellow and a low building highlighted in red. Credit: @VivaUCV.

Image from Google Street View. Distinctive pillars are highlighted in yellow and a low building highlighted in red. The red circle represents the location of the second IED.

The most obvious point we can draw from the locations of these two IEDs is that, although separated by time, they happened within 700m meters of each other. Of course, while this is certainly not proof the two IEDs are linked, their proximity is the first possible indicator that they may have been made by the same person or group. Whoever placed these IEDs also had knowledge of the local area in another way: they chose a choke point and a major junction with the remnants of a small barricade to place them. These were locations where security forces were forced to either to bunch up or slow down as they turned, channeling potential targets into the blast zone.

The two locations are also in a relatively wealthy part of the city, indeed the latter IED was placed in the center of Altamira, one of the most affluent areas of Caracas. They are also both busy areas: the first IED was placed on a large junction on Troncal 9, the major road running east to west through Caracas, the second IED in the middle of a main road that was filled with protesters earlier that day. Considering the number of people around, whether protesting, reporting as a journalist or simply observing, it seems likely that at least some people saw these IEDs being placed.

We can even designate a window rough window during which the emplacement of the Altamira bomb must have happened. In this video of the explosion, reportedly taken at 1245, we can see that the item that appears to explode appears to be a relatively large dark object. 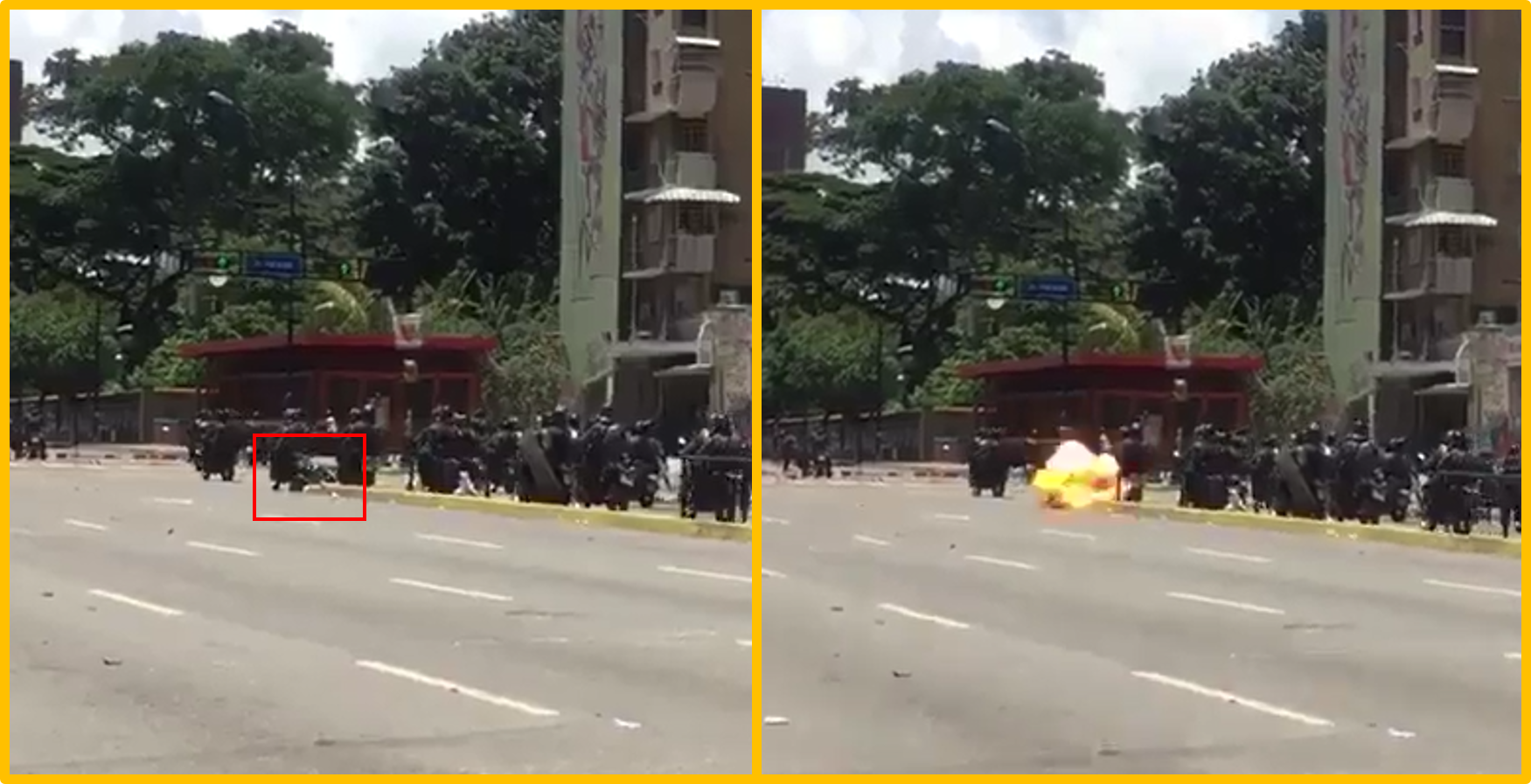 Still image from video reportedly taken at 1245 showing the possible IED in the red box.

However, in this video, reportedly taken at 1118, we see that there does not appear to be anything at the location where the blast later took place, although there does appear to be a small gathering of detritus to its south, possibly attempts at a barricade. The protests taking place at this time would have given the IED operators ample cover to place their bombs, which must have been prepared and planned well in advance. A final notable point is that both these explosions took place in front of gatherings of reporters. Although it could simply be that this was pure luck, it may also indicate that those who placed these IEDs was deliberately attempting to generate as much publicity as possible.

Both of these IEDs targeted security forces mounted on motorbikes. The first IED reportedly hit the GNB, while the second IED clearly hit members of the PNB. 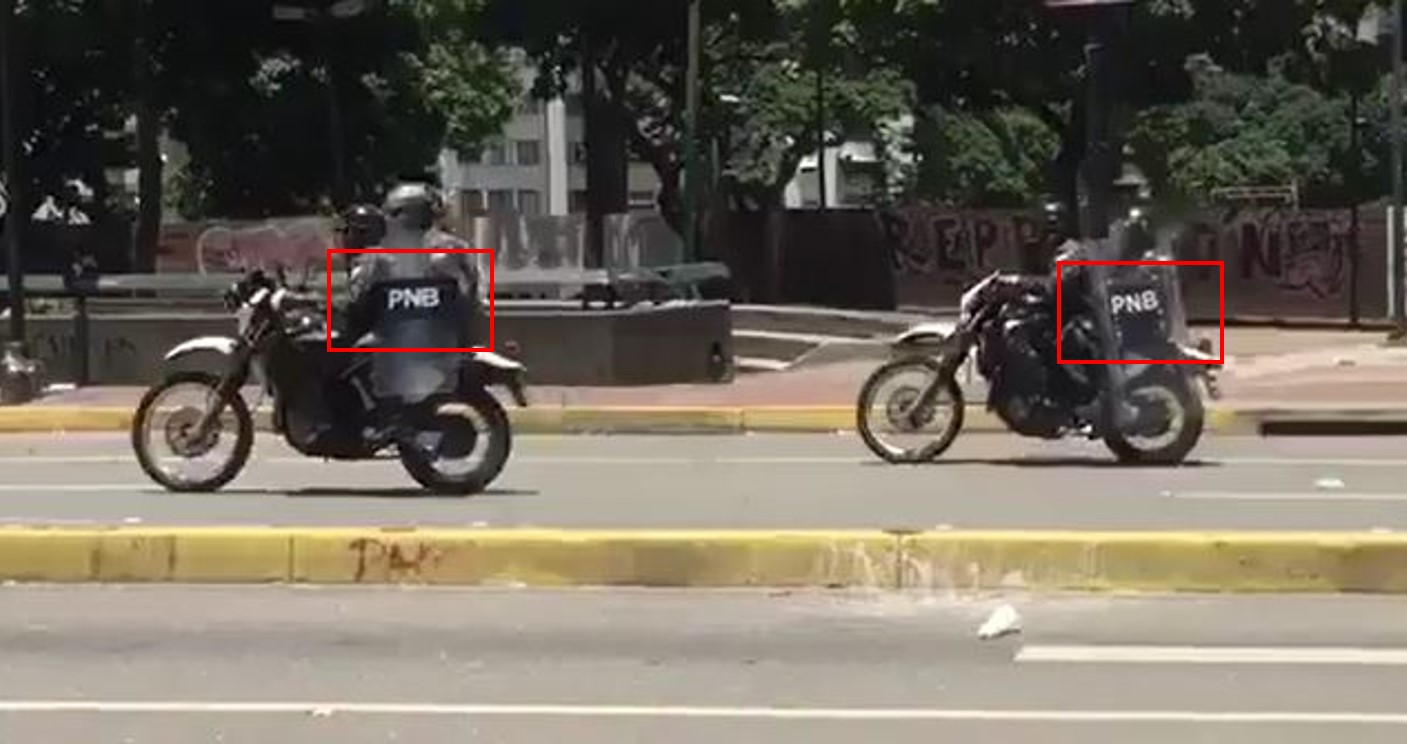 These motorbike riders are relatively lightly armoured and exposed. Being on motorbikes they lack the situational awareness of police on foot, yet they are not as protected as they would be in armoured vehicles such as the VN-4, which the Venezuelan security forces appears to have deployed in large numbers. Security forces on motorbikes seem to be an almost ubiquitous sight in Venezuela, whether that be moving to break down barricades, or peppering fleeing journalists with less-than-lethal munitions. They appear to move in large groups, as can been seen in both videos, often with two riders per motorcycle. As such they present a large, often relatively slow moving and unarmoured target.

The biggest difficulty when targeting these groups of motorcyclists would be making sure an IED goes off at the right time. Given the near perfect timing of both IEDs, it seems likely that these were not timed, but rather command operated, with a person physically initiating the IED as the security forces drove by. Although there is the possibility these IEDs were victim-operated, the large number of protesters and journalists moving around these areas make that seem like an unlikely technique to use.

Although it is not possible to ascertain the exact composition of these IEDs simply by watching the explosions, we can outline some cautious ideas about what they may have contained by carefully examining the nature of the explosions.

Examining the explosion in slow motion we notice several things about this explosion. Firstly and most obvious is that the explosion is not instantaneous. Approximately 3.5 seconds before the main charge detonates there is a large puff of dense, white smoke. It seems unlikely that whoever built this bomb wanted this effect, as it gives forewarning of a blast, and may indicate a mistake in the bomb’s construction.

The main explosion again produces a large amount of whitish coloured smoked, as well as a large sheet of flame. There also appear to be small pieces of shrapnel thrown out in all directions by this explosion, apparently burning brightly enough to be seen on camera in daylight, each producing a trail of smoke. One of these pieces lands immediately in front of the cameraman near the end of the video. This explosion does not appear to be from high explosives, which do not tend to produce such large amounts of flame and smoke. Rather it resembles a low explosive, and the burning pieces of shrapnel may indicate that fireworks may have been included within its construction. Fireworks seem to be plentiful in Venezuela and have been used extensively as weapons during this unrest, but are usually employed by rioters in a direct-fire role.

This IED reportedly caused anything from two to seven casualties.

The detonation of the second IED is instantaneous, and the blast appears to be larger than the first. The explosion produces a large amount of flame, and small pieces of burning shrapnel are again clearly evident. It is clearly more powerful and better constructed than the IED on the 10 July. The burning shrapnel still indicates that fireworks may be part of its construction, but the size of the explosion suggest that more, or more powerful, explosive material was used.

Venezuela is a country that has experienced violence and civil unrest for several years. The latest period of this, caused by the creation and contested election of an all-powerful Constituent Assembly, appears to have brought the country near the brink of civil war. Although there have been notable and prominent protests in Caracas, areas to the South West of Venezuela have seen high levels of violence, sometimes descending into what appear to be full blown firefights.

The IEDs seen in Caracas appear to fit this trend of escalation. Although it is far from clear if these two bombs were made and placed by the same person or persons, they do bear similarities in terms of their locations, placement, targeting, initiation and apparent composition. Whoever made these two IEDs chose relatively vulnerable targets, and locations where their victims would be channelled or slowed to make easy targets. It seems unlikely that these IEDs were anything other than command initiated, indicating a technical proficiency that is also apparent from their relatively successful initiation.

Although the current unrest appears to have slowed, there is still the likelihood of further discontent and violence against the Venezuelan government as the Constituent Assembly rewrites the constitution. Meanwhile the proliferation of small arms throughout the country, and potentially rebellious security forces, may act as a source of weapons and munitions for opposition activists. If the violence does indeed flare up again in a more serious form, it seems likely that whoever made these IEDs will not only have learned from previous operations, they may also have access to munitions stronger than fireworks. 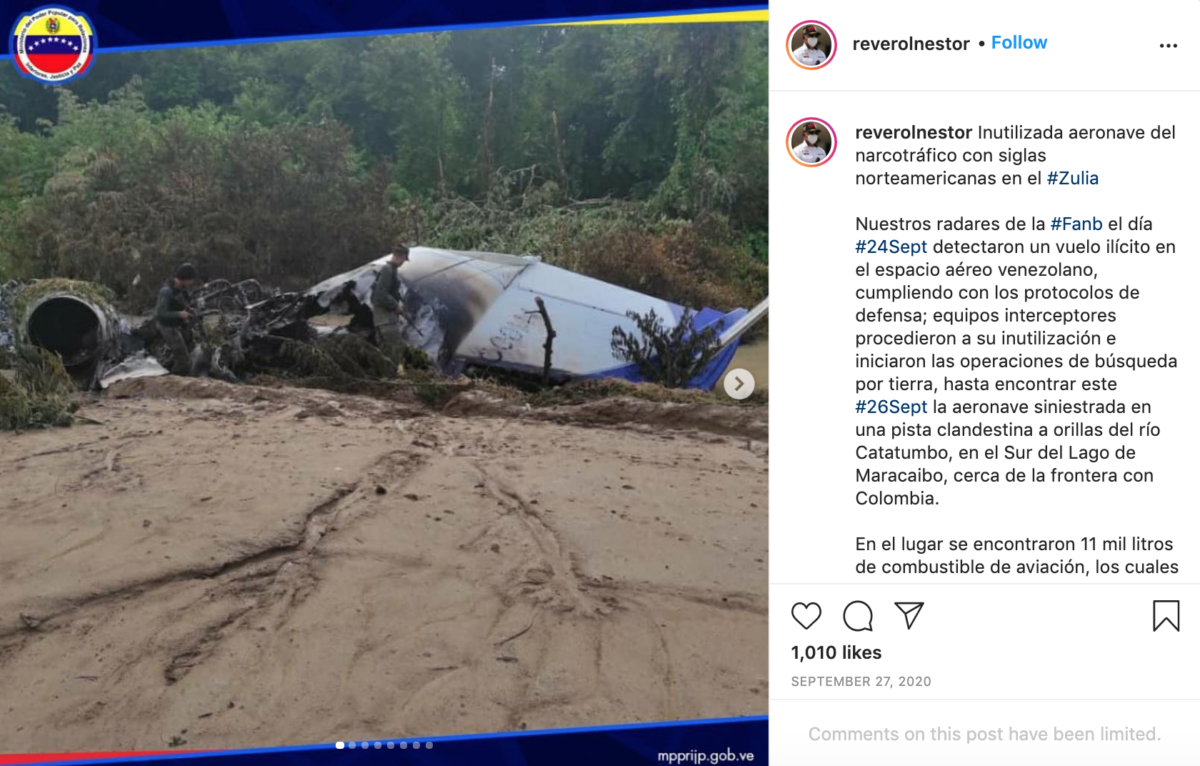 Flying High: The US Connection to Venezuela’s ‘Narco-Planes’ 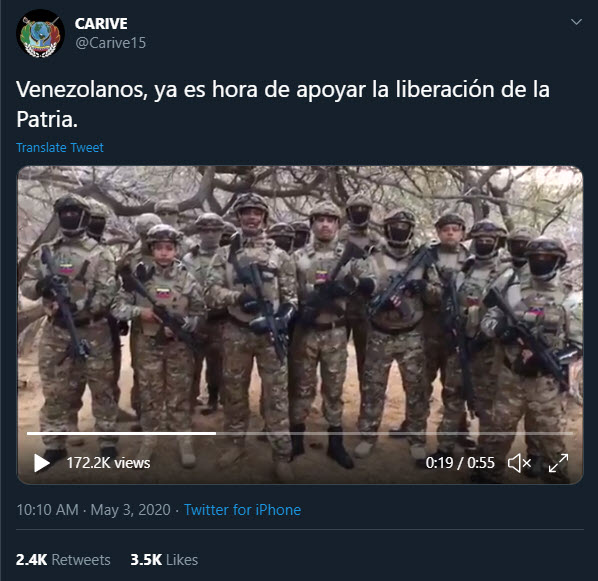