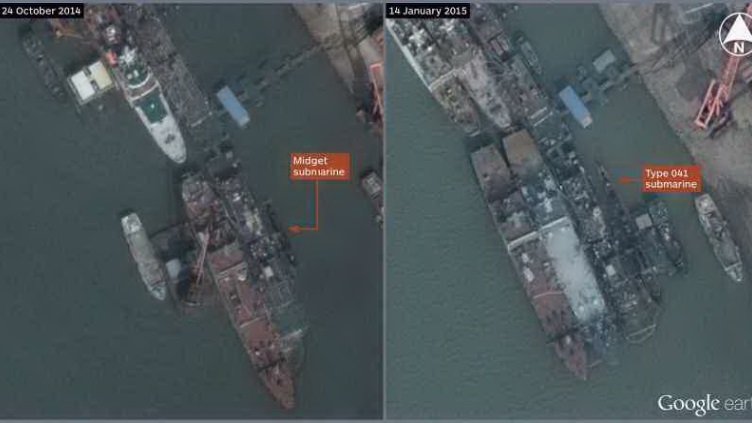 DigitalGlobe imagery published on Google Earth showing what appears to be a midget submarine at the Wuchang shipyard in Wuchang, China (30.534522 N / 114.283185 E). A Type 041 conventional submarine berthed at the same site in January is shown for comparison. (IHS/Google, DigitalGlobe)

Three weeks ago, I wrote over at the Swiss defense blog, Offiziere, requesting information about a possible new Chinese midget submarine spotted at the Wuchang shipyard. The article was widely spread and cross-posted here on Bellingcat, among others. Unfortunately, we didn’t receive any substantive information and even Offiziere partner sites like CIMSEC remained silent.

A week after our publication, Janes’s Defence Weekly picked up the topic shedding a bit more light. According to Jane’s, the surface displacement seems to be around 400-500 tonnes, an estimate we didn’t include. Thus, the size of the Chinese midget submarine corresponds with that of the South Korean Hyundai KSS 500A.

A model of the South Korean midget submarine was first shown in Busan at the Maritime Achievement Exibition, “Marine Week 2011″ (see image below). The platform is expected to replace the ageing Dolgorae class SSM sometime in 2016. Nevertheless, it is not known if any have been built. Jane’s reported in March 2015 that a variation of this design has been offered to the Royal Thai Navy.

Read the rest of the update over at Offiziere.