Andrew Haggard is the founder of the Korean Defense website. He's fascinated by all-things military and defense-related with a particular interest in South Asia and the Korean peninsula.

On April 4, 2015, a police officer named Michael Slager of the North Chaleston Police Department shot and killed Walter Scott as he attempted to flee from the officer. The case has made national headlines in the United States and has been picked up in international media as well.

Since the shooting, several major events have taken place. Firstly, an eyewitness to the shooting came forward and provided video of the shooting to Mr. Scott’s family, which has been widely seen in the public. Secondly, the South Carolina State Law Enforcement Division (SLED), which is investigating the shooting, released dashboard camera video from Michael Slager’s police car. The final major developments are that Michael Slager has been fired from the police department, arrested, and charged with murder.

Using the videos released by SLED and an eyewitness, it’s possible to determine the location of the shooting. The video below is from the police officer’s dashboard camera.

Walter Scott: Dash camera video from The Post and Courier on Vimeo.

The police dashboard camera video reveals that Scott pulled into the parking lot of an Advance Auto Parts. A quick search of Advance Auto Parts reveals a couple of possible addresses within the North Charleston jurisdiction. 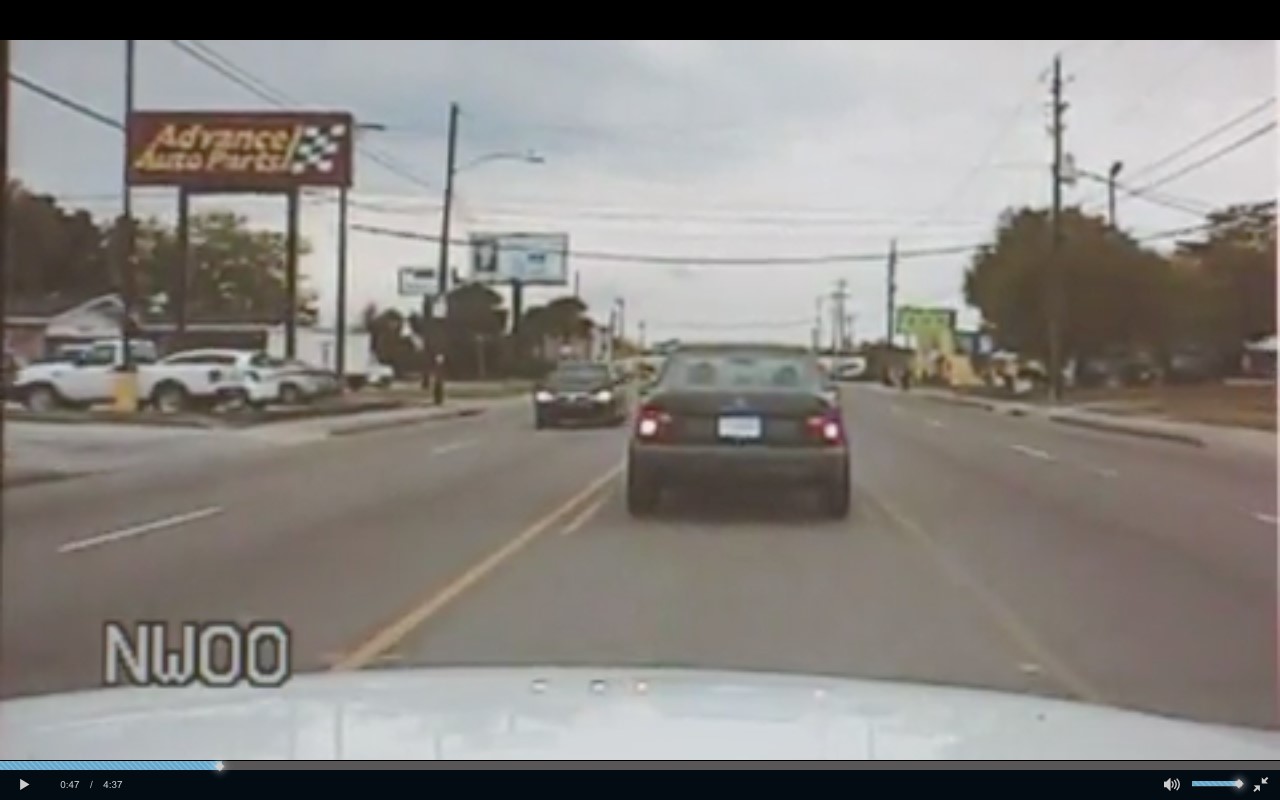 The location of the traffic stop occurred at Advanced Auto Parts store located at 1945 Remount Road in North Charleston. From the video, we can tell that Walter Scott was driving Westbound on Remount Road/State Road S-10-13 since he makes a left into the Advance Auto Parts’ parking lot.

After turning into the Advance Auto Parts’ parking lot from the street, Scott turns right and stops the vehicle. Immediately, there are three things of note in this scene.  Firstly and most obviously, the two white sheds in the background (red rectangle); secondly, the fences to the left of the white shed (yellow rectangle); and thirdly, the telephone pole (blue rectangle in front of the vehicle Scott was driving (green rectangle).  As well, the brick building (pink arrow) next to the white sheds is worth noting. 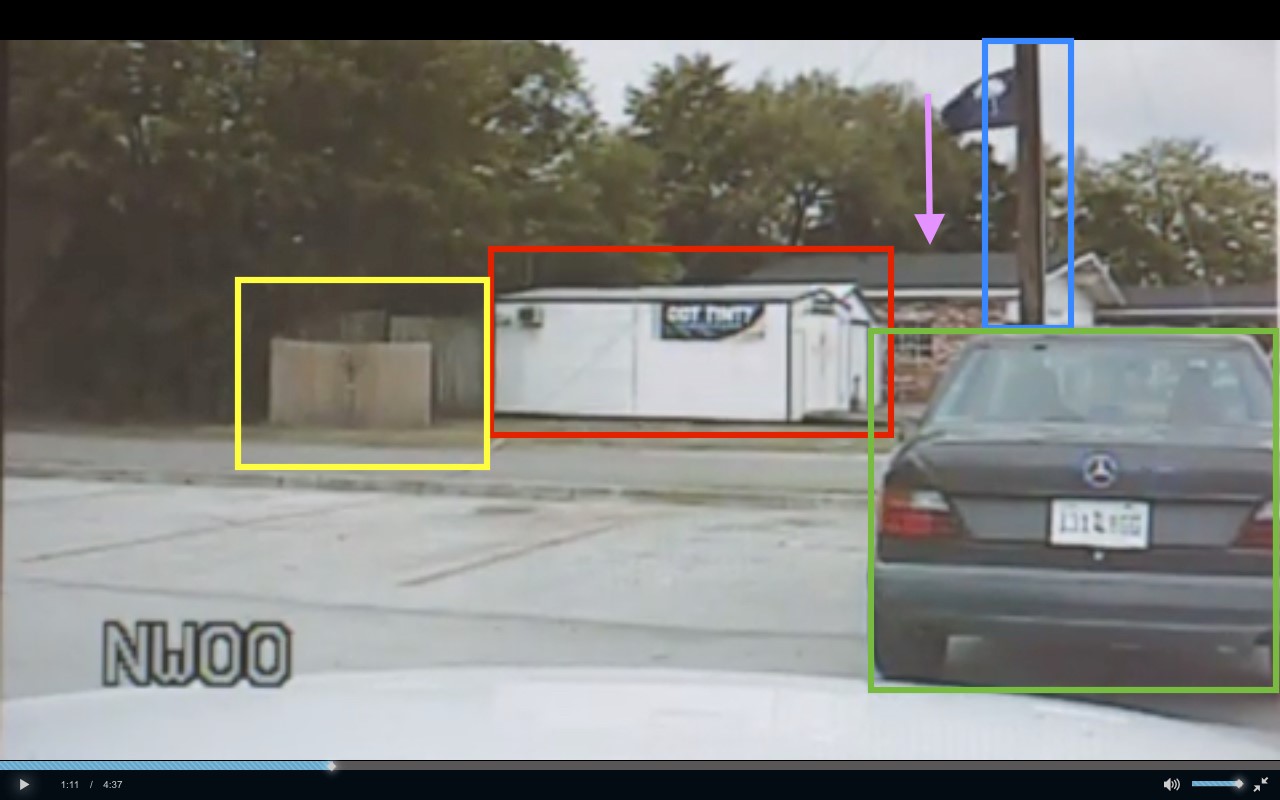 All of these buildings can be found in satellite imagery or Google Street View.  The green circle in the satellite overview shows the approximate location of the vehicle Scott was driving. It’s also worth noting the flag of South Carolina is fluttering in the background.  What’s more, it looks like the banner on the white shed says “Got Tint?” 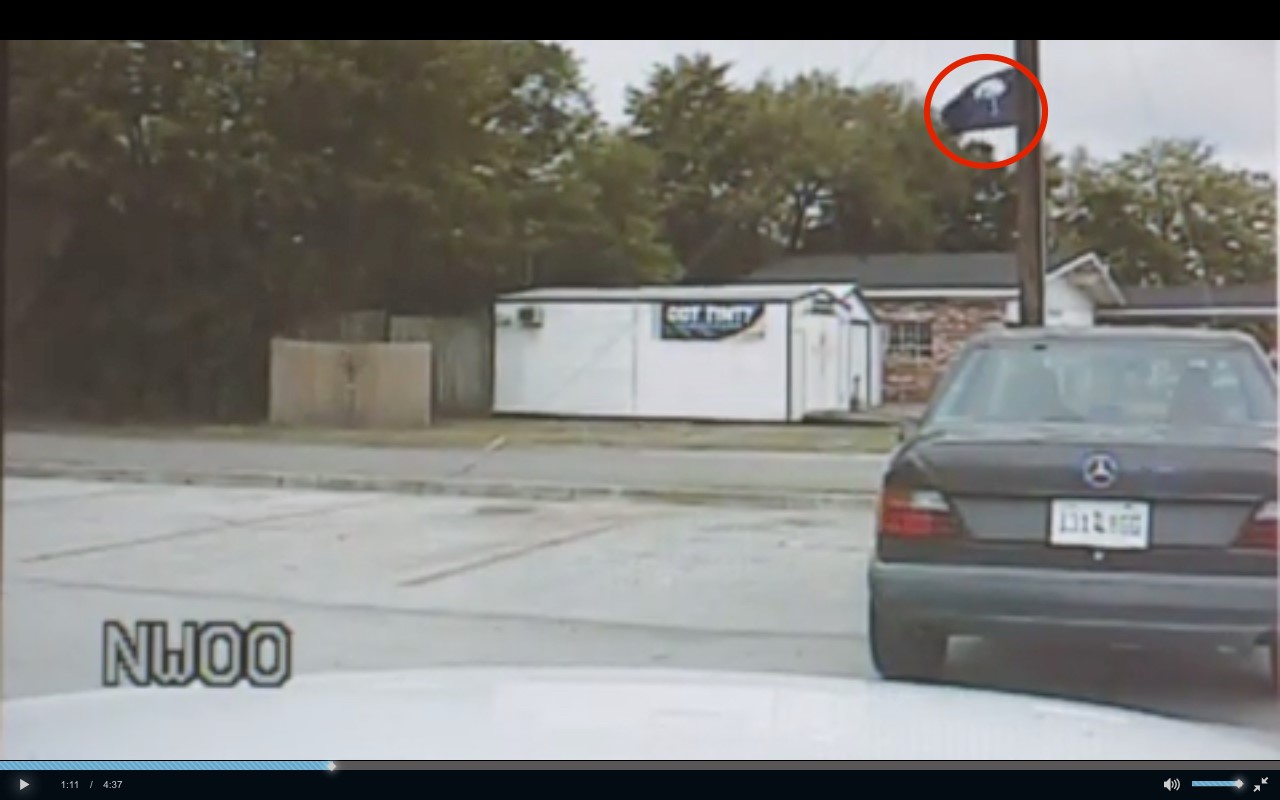 Using Google’s Street View service and going in the eastbound direction down Remount Road, it’s possible to find the same flag fluttering in front of a window tinting business.

After exiting the vehicle for the second time, Scott runs from the car, heading left of the camera’s position, which would be south from the location of the car. 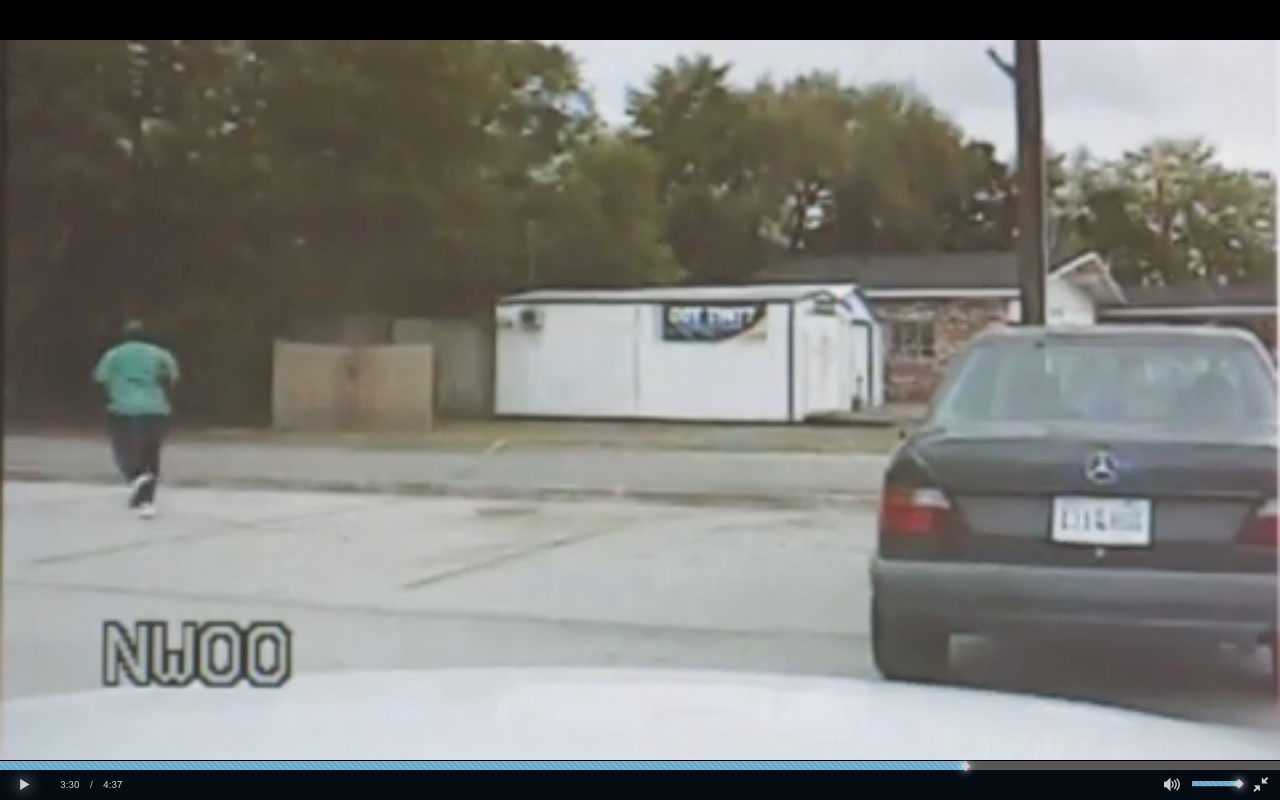 A man by the name of Feidin Santana happened to be walking by the location where Officer Michael Slager later shot and killed Walter Scott.  Santana pulled out his phone and recorded Officer Slager shooting Walter Scott.  Apparently, Santana stopped recording for several minutes and resumed recording as more officers arrived on scene.  The videos is graphic in that it shows Walter Scott being shot and his body.  Screen captures from these videos will be censored to not show Mr. Scott’s body.

Several clues from Santana’s videos also help us to geolocate the near precise location of the shooting.

Firstly, as Scott flees from and is shot by Slager, we can see a white building (dark blue rectangle), which is to the right of Santana and west of vehicle Scott was driving. We can also see there is a fence separating the Santana from Slager and Scott. You can also notice a red sign (pink square). As well, we can also see another building (orange arrow) at another scene from the video that is to the north of Santana and west of Scott’s car.  We can also clearly make out the pathway (red arrow) that links the white building from the previous screen capture with Craig Road.  Finally, off to the right-hand side of the video is the Advance Auto Parts store (light blue arrow). Again, all of these buildings and features can be spotted in Google Earth. From Google Street View, it’s possible to view the pathway from Craig Road, which is perpendicular to Remount Road.

Based on signs posted at the entrance to the path, it appears the path is actually the driveway to Mega Pawn.

The sign seen behind the white building appears to be the LED sign for Mega Pawn, which can be seen from Rivers Avenue.

Based on all the video evidence available, it appears Scott died approximately 150 – 170 meters from the spot where he was pulled over by Slager.  Approximately, 160 meters away from the location Scott’s death was North Charleston’s Fire Station Number Three.  That station, like all other fire stations in North Charleston, does not have an ambulance.  EMS services in both North Charleston and Charleston, South Carolina are provided by the county. The Journey of Ashli Babbitt