Professor Theodore A. Postol of MIT vs. The Concept of Time

Professor Postol was previously known for his work with the late Richard Lloyd on the August 21st 2013 sarin attacks in Damascus, claiming the White House version of events was false, with Postol in particular attempting to point the finger of blame at rebel groups. His status at MIT has made him particularly popular with conspiracy theorists who cite his work and credentials when promoting their false flag theories around the attack.

With the latest attack in Khan Sheikhoun Professor Postol has returned to the fray, publishing a series of reports claiming to show the version of events as described by the White House is false. This has yet again drawn much positive attention from conspiracy theorists, and even a small amount of mainstream attention.

Professor Postol claims the following for his dramatic conclusion:

The French Government has released a report that totally contradicts the already dubious allegations in the WHR.

The French Report instead claims that there were at least three munitions dropped from helicopters in the town of Saraqib, more than 30 miles north of the alleged sarin release crater identified by the WHR.

The WHR claims that a fixed wing aircraft was the originator of the airdropped munition at the alleged dispersal site. The French Intelligence Report alleges that a helicopter was used to drop sarin loaded grenades at three different locations in Saraqib.

Both reports cannot simultaneously be true.

Professor Postol presents the following graphic in his report, clarifying the exact point he’s trying to make, that the French report claimed a different attack site for the April 4th 2017 attack than the White House report (referred to by Professor Postol as “WHR”) 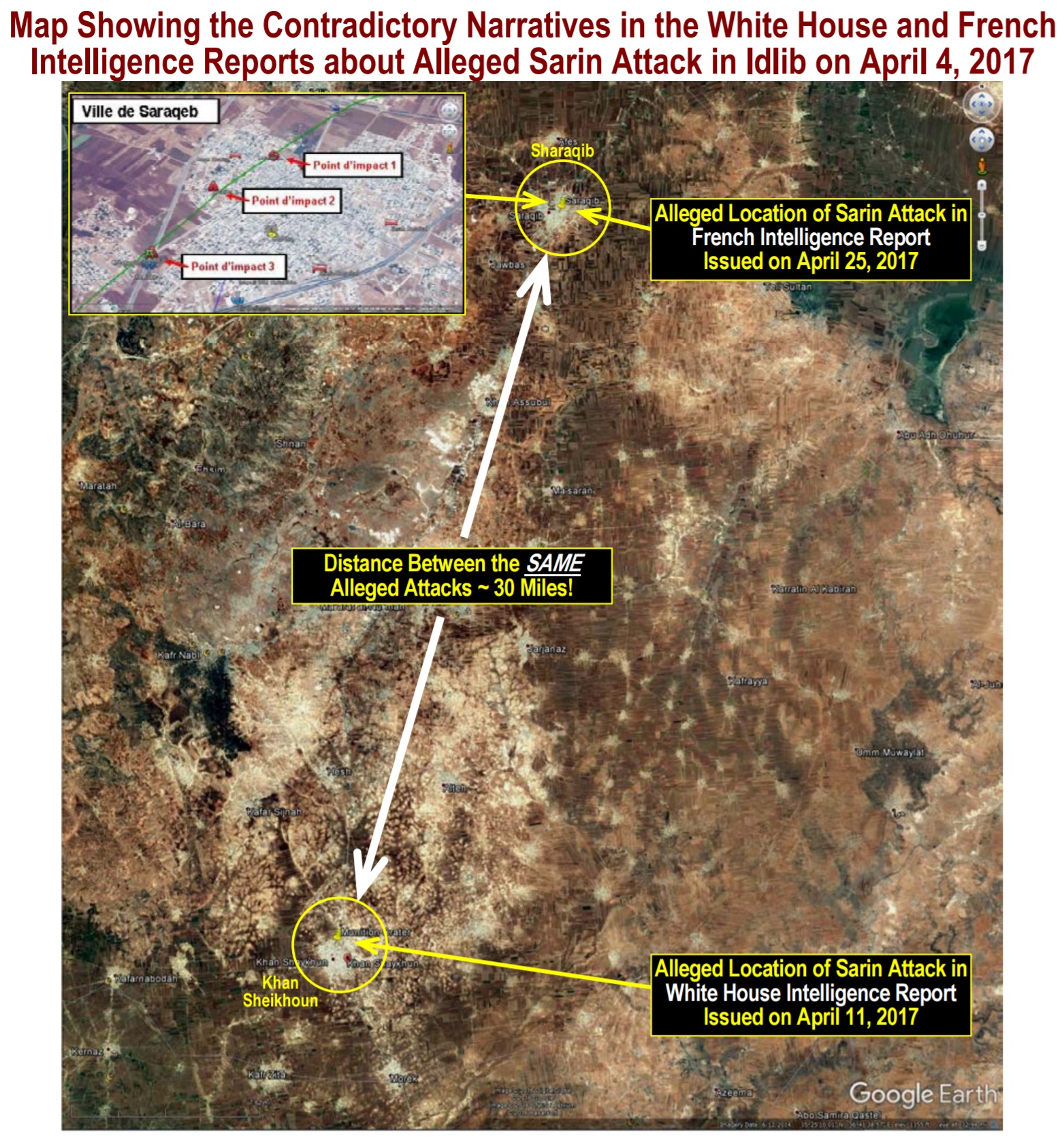 It is quite clear that Postol believes the attack on Saraqeb (Sharaqib) occurred on April 4th 2017. However, this is an error both enormous and incredibly basic, especially when it’s the core premise of a report that attacks the “WHR” in such strong terms.

The French report does indeed refer to a chemical attack in Saraqeb, where, as Professor Postol puts it, “a helicopter was used to drop sarin loaded grenades at three different locations in Saraqib”. While Professor Postol read the report closely enough to note this claim, he apparently missed a key piece of information in the same paragraph where the attack is described in the French report (highlighted in italics below):

This intelligence on the process used by the regime, which is a sign of its responsibility in the attack on 4 April, is based notably on the analysis of the content of an unexploded grenade which was used with certainty by the Syrian regime during the Saraqib attack on 29 April 2013. That mid-afternoon, a helicopter arriving from the north-east flew over the city of Saraqib at high altitude. Three unidentified objects, emitting white smoke, were dropped on neighbourhoods to the west of the city, on a north-south trajectory.

The presence of the same chemical compounds in the environmental samples collected during the attacks on Khan Sheikhoun on 4 April 2017 and on Saraqib on 29 April 2013 has therefore been formally confirmed by France.

Despite the date of the Saraqeb attack being stated to be April 29th 2013 in the document twice, even in the same paragraph providing the details of the attack Professor Postol used in his report, for some reason Professor Postol clearly believes the Saraqeb attack occurred on April 4th 2017, and uses this to attack the White House report, and by association the widely accepted narrative around that attack, “that a fixed wing aircraft was the originator of the airdropped munition at the alleged dispersal site”.

This error is so basic, especially considering it’s a short 6 page report with the date mentioned twice, that it’s quite incredible that anyone, especially any academic, would make it. In a case as serious as a sarin attack one would hope for some basic fact checking, especially when one is attacking official government reports and making allegations that support claims of false flag attacks. One can only hope Professor Postol’s future reports will have a higher level of professionalism, which would be expected from a professor at the Massachusetts Institute of Technology, lest he ends his career as another conspiracy theorist babbling on fringe websites.