While wading through the document collection, by chance I came across a curious set of documents: translations of articles from the Russian military journal ‘Military Thought’ (Военная Мысль), which has been published since 1918. What’s more, the collection holds documents from classified versions of the journal, which were acquired through CIA’s clandestine activities, meaning from human sources. 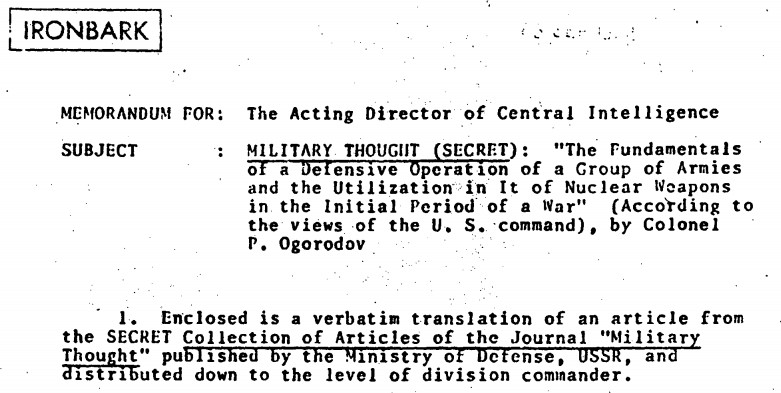 One such source was a colonel of Soviet military intelligence (GRU), Oleg Penkovsky. Among other intelligence he passed on to the US and UK, he had photographed secret Soviet documents with a Minox camera, including the classified versions of ‘Military Thought’. Penkovsky was captured by the KGB in October 1962, and executed after a speedy trial in May 1963.

The documents provided by Penkovsky were assigned the codeword IRONBARK. A declassified article in CIA’s journal “Studies in Intelligence” describes the ‘Military Thought’ series provided in the IRONBARK series:

At this point, the singular nature of some of the IRONBARK, particularly the Special Collection of Articles of the Journal Military Thought, merits some explanation. The Soviets classified the documents top secret, but, most significantly, they were in fact unofficial. The unusual nature of the Special Collection arose from the fact that it was established, in early 1960, as an ad hoc forum for the airing of frank, controversial and far-ranging views of senior military officers. According to an editorial note, the articles expressed only the opinions of the authors.

The article goes on to note that the ‘Military Thought’ series was helpful in increasing understanding of the doctrine, organization and hardware of the Soviet forces.

Update, July 29th 2017: Mark Kramer from Harvard’s Project on Cold War Studies sent a note, saying that their Cold War Studies Archive has a full collection of all the original Russian-language issues of Voennaya Mysl’ (including confidential and top secret versions) from 1918 to 1989 on microfiche, available for researchers at the Lamont Library.

The problem: lack of metadata

The problem with the CIA collection is that the documents are actually not easily discoverable. The metadata for the documents was lacking, and there was no single way to search for all the articles, but rather you had to come up with different queries to even find all the articles from this particular journal. Thus, I decided to scrape together a single list of all Soviet military journal articles I could find, with focus on the ‘Military Thought’ articles. In fact, some of the articles have been declassified and released over 10 years ago already and posted online, but the lack of metadata has made discovering them difficult.

The raw list from CIA’s archive contained over 1200 entries, dumped into Google Sheets. After applying a bit of macro magic to standardize document names, it became apparent there were a lot of duplicates. In some cases, the same article was filed into the collection five times. A bit under 800 entries remained after eliminating the duplicates, after which I went through the documents to get the release year, issue, classified and author data for each article. This makes it easier to follow the discussions happening in the journal, as it was also a medium for Soviet military thinkers to debate on various issues.

While going through the article, another codeword in the documents emerged: OSSIAN. The cover pages of the documents make clear that the codeword was associated with translations from classified version of ‘Military Thought’. Out of the whole collection of almost 800 documents, it was left unredacted in only four documents. Overall, the redactions done in declassification reviews are not consistent. In cases where the same articles have ended up in the collection through different routes, the redactions can be wildly different. This is particularly frustrating in the cases where the only available version is a fully redacted one, because often the pages including information on what issue and year the articles originated from is missing. 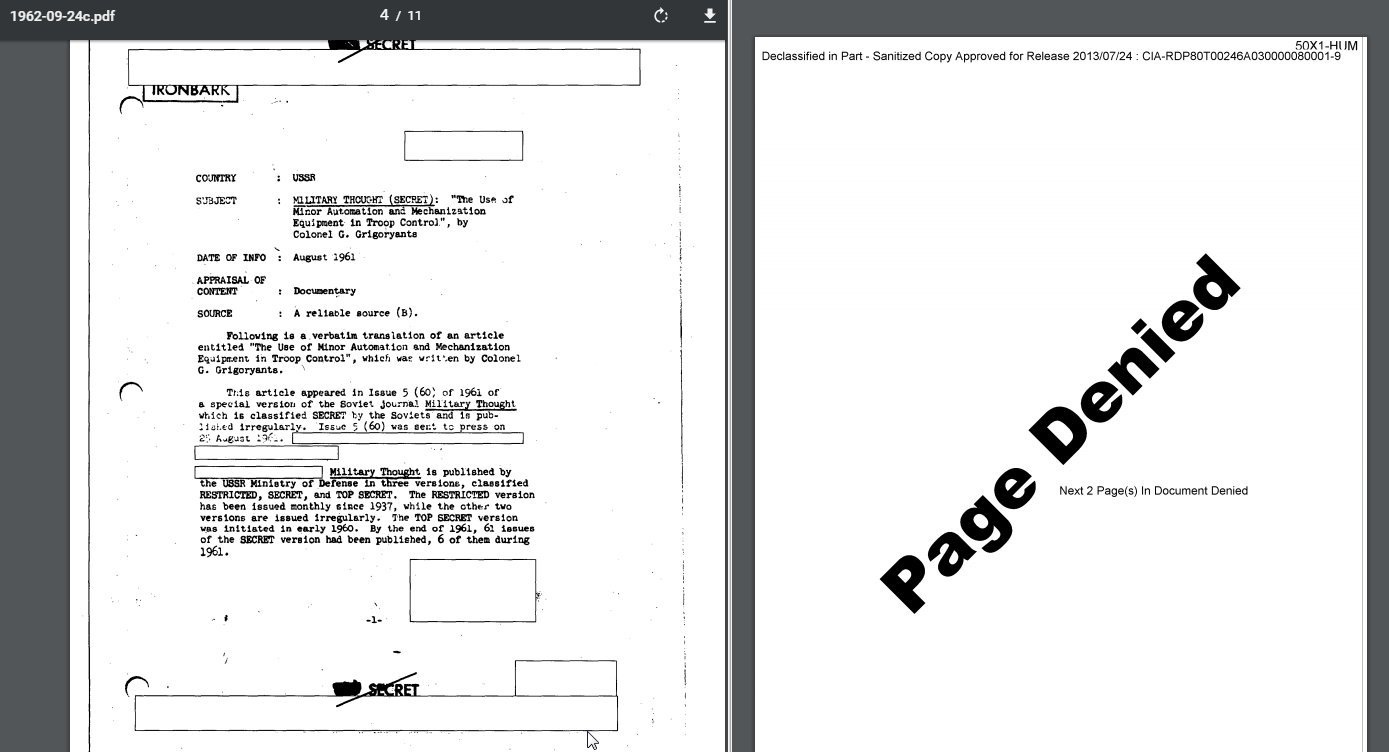 Luckily, in a few cases it’s been possible to find the publishing information in roundabout ways. As one example, the CIA translations contain cover pages, which sometimes give some biographical information about the authors. Below is an example where a translation of an article by the same writer contained information in which issue specifically his other article was published. The document collection also contains tables of contents for several issues from 1967 to 1970.

Background information about a writer. Unredacted, the header would real “Headquarters Comments”. Also redacted likely are references to a report containing the Russian-language original text and its FIRBD identification.

The partial redactions are sometimes done in a way that makes it possible to resolve what was being redacted. In the case of OSSIAN documents, in some documents just enough of the capital charactes are visible, that we can determine with reasonable certainty what was being redacted. One such example is noted below. In the cases where this kind of determination can reasonably be made, the OSSIAN codeword has been added to the article’s entry on the list.

Above: partial redaction of OSSIAN. Below: Full text fitted with Photoshop to confirm match.

I reached out to Nicholas Dujmovic, a former CIA historian and senior analyst now working in academia, to get a better sense of how codewords were used. He noted that the codewords can be used to protect both the source and the material itself, meaning that anyone catching a reference to ‘OSSIAN’ or ‘IRONBARK’ would not automatically know what is the material, and even getting hold of the material, you can’t link it automatically to a source. The codewords may also change in the case of longer operations.

Working with complete data sheet, I sorted the data based on codeword appearance and dates of the CIA documents. Based on this, it looks like the OSSIAN codeword was definitely used from 1978-1979, and may have been in use (based on the partial redactions) already in 1974.

There are a couple of ways to browse the document collection. One is to use the Google Fusion Table view into document cards. This gives a fairly handy way to browse the documents, and is easy to search with the filters. By clicking on the “Filter” tab below, you can access the different search filters, allowing sorting by year, journal, classification, and so on. You can also enter keywords by selecting the “Article Title” as filtering field. In the screenshow below you also see the total numbers of articles currently in the collection from different journals, with ‘Military Thought’ forming the bulk of the collection.

By clicking on the “Full List” tab, you can also get a more spreadsheet-like view. This view also lists all the available versions of the article found to date. Or finally, you can access the source Google Sheet directly.

The topics of articles vary a great deal, ranging from how to organize military conferences to the conduct of nuclear and chemical warfare. In some of the articles, experiences from using 1960’s Soviet mainframe computers for various purposes are discussed. Thus, the collection can provide some historic detail also on subjects not directly related warfare.

Some examples of articles that can be found through the index:

As the collection is probably not complete and likely contains errors, it will be updated. If you wish to stay up-to-date, please bookmark this page instead of the sheets direction. This post will be kept updates. The index is provided with CC BY 4.0 Free Culture license, meaning you’re free to use it in any way you wish, so as long use is attributed.