On February 3rd, Bellingcat launched the Ukraine conflict vehicle tracking project, a collaborative effort where we collect reports on movement of military equipment in and near Ukraine to determine if Russian units have crossed the border.

We opened a channel through Checkdesk through which anyone watching the conflict can submit reports of interesting vehicle sightings. These reports are validated by the Bellingcat team, after which they’re added to our data set that is made available through Silk, a platform for creating rich visualizations of data.

The project has gotten plenty of attention during its first week, with mentions ranging from Kyiv Post to Norway’s Aftonbladet.

During the first week, we made a number of improvements to Bellingcat’s vehicle tracking project Silk site, including some tweaks to the home page, as well as generally improving the presentation of many pages. Most notably, the sightings pages got some additional information, and now contain geolocation information, as well as quick links to other sightings from the same location. (See an example here.)

At launch, our data set had 94 entries, and during the first week we’ve taken in 71 new entries, bringing us to a total of 165 entries. The entries range in time from early 2014 to the past few days. We also still have many entries in unprocessed in our backlog as we’re reacting to current events, so the data set will keep growing as quickly as we can process it.

Let’s take a look at what kind of sightings we have from February.

A few things stand out here: there are Kamaz Vystrel and Pantsir-S1 sightings, equipment which is not used by the Ukrainian military. (Note: we’re using Vystrel as the generic bucket for all vehicles of that family, including the Dozor-N variant used by Russian armed forces.) If we have a closer look at the Vystrel sightings, something interesting stands out. The vehicles have also been seen in footage of the Debaltseve offensive.

Another interesting finding related to the Debaltseve offensive comes from combining that footage with earlier footage from August. Video taken in Russia’s Staraya Stanitsa shows a BMP infantry fighting vehicle with the text “Лавина”, or “Lavina” (meaning ‘avalanche’ in Russian) written on the side. This same writing can be found on a unit filmed in Uglegorsk, and in another clip from the Debaltseve offensive. On closer examination, also the damage on the units match. 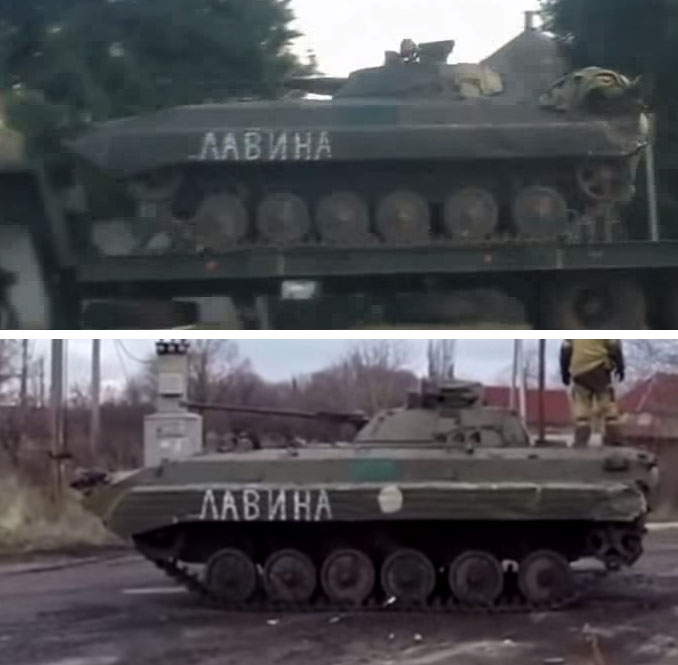 Above: “BMP Lavina” in Staraya Stanitsa, Russia. Below: same vehicle in Uglegorsk, Ukraine.

Another visualization, showing the reference location where the unit has been sighted.

Thus, it seems clear military equipment has been transferred from Russia to Ukraine, and is also being used in the Debaltseve offensive. This is in line with other findings we’ve mentioned earlier, such as the Pantsir-S1 sightings in Ukraine, a modern Russian air defence system not found in the Ukrainian military’s inventory.

As we continue adding new data, we hope to gain new insights to the extent of the cross-border military equipment transfers. So, please keep on contributing new reports!