Open Letter: Regarding Unfounded Allegations Against Bellingcat From Ukrainian MP and Former Minister

The open letter can be downloaded here

On November 11, Ukraine’s former Minister of Veterans Affairs and current member of parliament Iryna Friz published a Facebook post that accused Bellingcat and our investigative partner, The Insider, of being “infiltrated” by the Russian security services, specifically the FSB.

This information has spread to a number of mainstream Ukrainian news outlets, including Obozrevatel. This accusation of FSB infiltration came following our publication of an in-depth investigation into Ukraine’s newly-formed Ministry of Veterans Affairs regarding its ties to controversial far-right figures and organizations, which undermines its work in assisting Ukraine’s veterans who fought against Russian aggression. This investigation included commentary from two Ukrainian veteran leaders concerned about the ministry’s current makeup and its activities. Prior to the publication of this investigation, we reached out to the Veterans Movement of Ukraine (VMU), Veterans Brotherhood, and the Ukrainian Prime Minister’s office for comment — we received no response from any of them.

In her Facebook post, former minister Friz stated that our investigations into far-right organizations and leaders in Ukraine echo what is “exclusively a Russian narrative” of “fascists in Ukraine”. Additionally, she suggests that we should vet our contributors and staff with “Russian names”. We would like to note that our staff and researchers with what could be considered “Russian names” only include our editor, a Ukrainian-American, and the main author of this report, who is also a Ukrainian-American.

“Secondly, I unfortunately can state that there are problems with the Bellingcat team. There are all signs that people from the Russian FSB have infiltrated it. I otherwise cannot explain for myself the fact that they coordinate their work with Russian outlet The insider, which is controlled by Lubyanka.“ 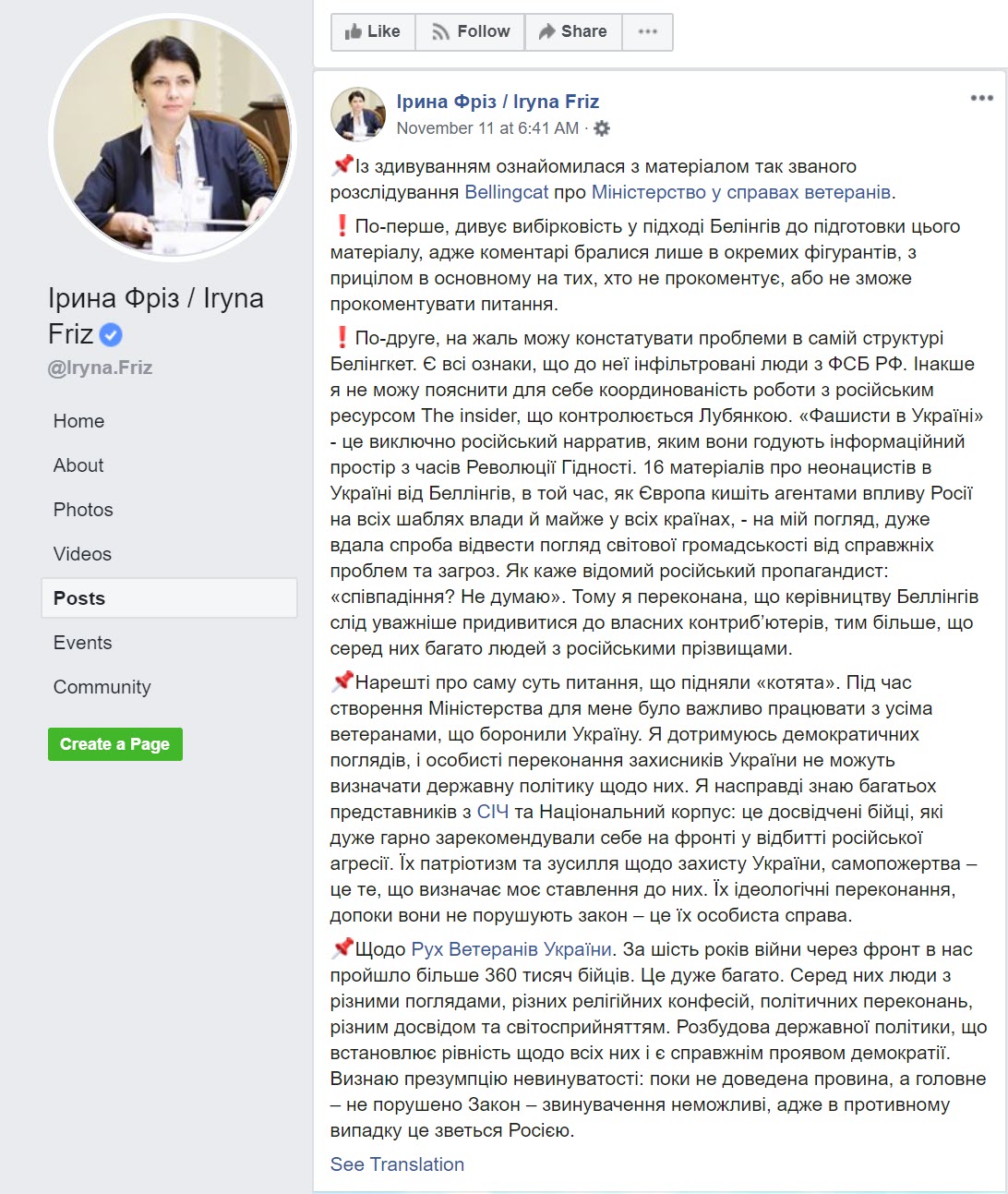 Former minister Friz’s specious accusations of our “infiltration” by the FSB come after a series of publications we have published uncovering the conduct of Russia’s security forces across Europe, including Ukraine. These investigations, among others, have unmasked Russian spies and security service officers who have attempted assassinations in the United Kingdom and Bugaria, attempted to stage a coup in Montenegro, assisted in the downing of Malaysian Airlines Flight 17 (MH17), and attempted hacking of international bodies in Switzerland.

Additionally, Bellingcat’s researchers have received death threats from Ukrainian far-right groups after investigation their activities, including the translation and distribution of the manifesto of the notorious New Zealand mosque shooter.

The accusation that our investigative partner, The Insider, is controlled by “Lubyanka”, referencing the headquarters of Russia’s FSB, is especially ludicrous considering the personal sacrifices that its journalists have made in order to continue their independent journalism investigating the government of their country, including investigating its security services.

It is especially ironic that such irresponsible accusations were made by a Ukrainian MP and former minister during the week when Bellingcat’s independent investigation into Russia’s shelling of Mariupol, which killed dozens of Ukrainian civilians, became part of the evidence provided by Ukraine in its International Court of Justice (ICJ) proceedings against Russian aggression, along with previous cases filed with the ICJ.

It is false to suggest that our assessment of the problems posed by Ukraine’s small, but vocal and active, far-right groups is a Kremlin talking point. A 2018 report from the U.S. State Department named two Ukrainian far-right groups mentioned in our recent investigation as “nationalist hate groups”; these same groups were called “threat[s] to Ukrainian democracy” by international human rights watchdog Freedom House.

Raising concerns over Ukraine’s far right, which lacks popular support but has an out-sized role in a number of Ukrainian government organs, is vital for the continued development of Ukraine’s civil society and newly-established government ministries.

We expect that former minister Friz retracts her baseless statements targeting Bellingcat and The Insider.

Dobby has to punish himself…

It’s a reaction to a reaction, in this case the cats. Who pays attention will be the one to understand  — where, what, and who has been burned. 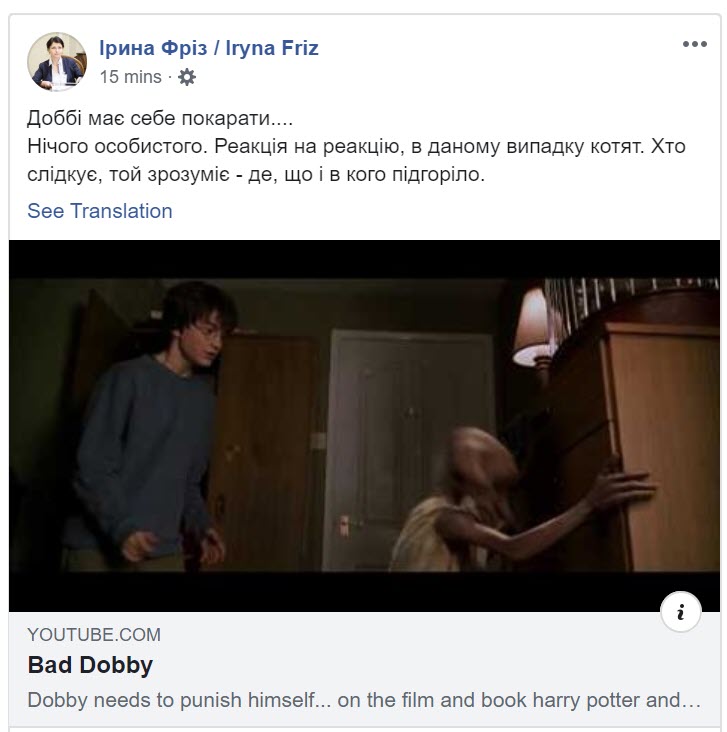