Why is a Leading Estonian Think Tank Working Alongside Ukraine’s Far Right?

UPDATE: In an article published in Estonian media on August 2, 2019, ICDS chief executive Dmitri Teperik told news website Delfi: “At one point [Yevhen] Karas came to the event, and he stayed there for maybe three hours. We asked a local man whom he was dealing with and he explained who he was…when we found out he was the head of the C14 organization, we were very outraged and told the summer school organizers that he didn’t belong.” Teperik also stated that did not realize at the time that Education Assembly was affiliated with C14: “Last year we got the impression that [Education Assembly] was a civic association that unites young people interested in studying in Ukraine, and that it was carrying out many interesting educational projects. There were also many distinguished experts besides us.” Teperik further added they did not plan to attend the 2019 summer school, least of all because “[C14’s] right-wing links were evident,” and further reiterated that they do not support C14’s actions.

In addition, ICDS indicated on August 2 on its official Twitter account that “ICDS does not attend this years event and we do not collaborate with the Education Assembly. The organisers put our logo on the event without consulting us first. We have asked them to remove the references to us.”

On the night of April 20, 2018, members of Ukrainian far-right group C14 filmed themselves attacking a Roma camp in Kyiv. One senior member of the group even boasted about the attack in social media posts that have since been deleted. Subsequent video published on the Leviy Bereg news site showed a terrifying scene of Roma women and children fleeing from C14 members throwing stones and spraying tear gas.

But just over four months later, representatives of a leading Estonian think-tank, the International Centre for Defence and Security (ICDS) — organizers of the annual Lennart Meri Conference that draws leading politicians and public figures from around the world — were working alongside a C14-linked organization, and even notorious C14 leader Yevhen Karas, at a “summer school” in Kyiv. And they will apparently be doing so again in 2019. 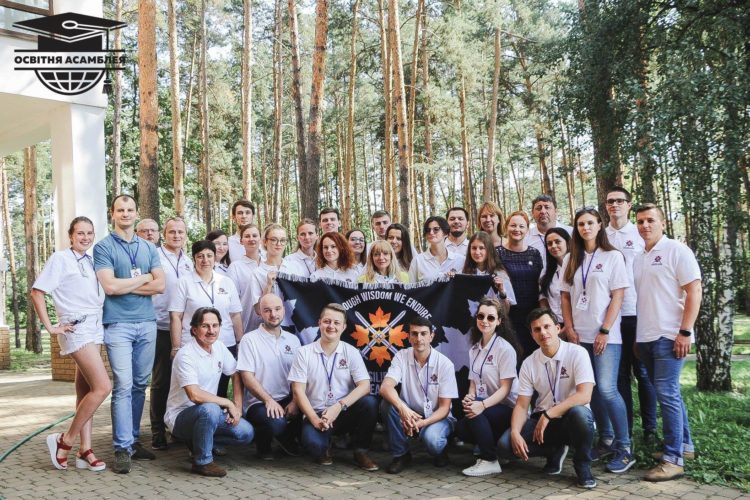 A photo posted on Facebook by C14-linked Освітня Асамблея (Education Assembly) from their Resilience League “summer school” in August 2018, which took place alongside representatives from two Estonian think tanks

The “Resilience League” and Ukraine’s C14

For the second year in a row, a leading think tank in Estonia, the International Centre for Defence and Security (ICDS), will be working alongside an organization linked to notorious far-right group C14. “Education Assembly” (Освітня Асамблея) is a group linked to C14 that, as revealed in our previous investigation, has received funding from the Ukrainian state for “national-patriotic education” projects.

On its Telegram channels on Friday, July 26, both Education Assembly and C14 shared an announcement about a “summer school” scheduled to take place in August 2019. With funding provided from Ukraine’s Ministry of Youth and Sports under the banner of “information security and national-patriotic education,” the “Resilience League” summer school will apparently focus on information security, information warfare, and dealing with propaganda. These are hardly fringe topics and certainly warrant attention, particularly for countries in the former Soviet Union that continue to face down Russian disinformation and propaganda. 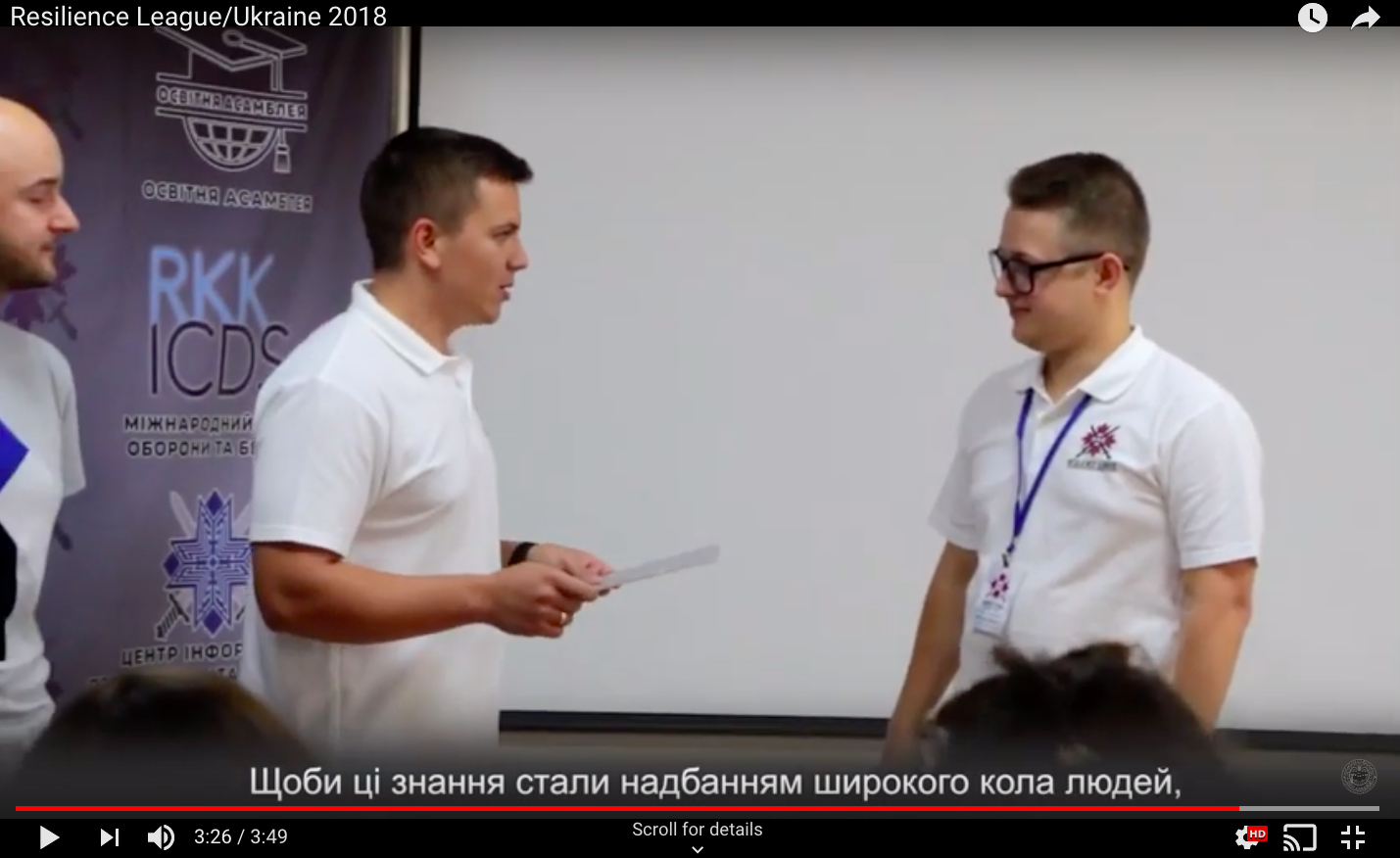 However, a spokesperson for ICDS told Bellingcat via e-mail that their organization “does not cooperate with either the Education Assembly, or let alone C14. We don’t share C14[‘s] values nor their actions.” ICDS, the spokesperson said, was only asked to hold a presentation on resilience against hostile disinformation and radicalization in Kyiv.

ICDS’ spokesperson added that “presenting ICDS as co-organiser of this summer school is misleading, and the organisers have done it without consulting with us first. We have contacted them regarding this.”

In an e-mailed comment to Bellingcat, ICDS Chief Executive Dmitri Tepernik stressed that ICDS agreed to take part in last year’s event because of the importance of the issue of disinformation and resilience in eastern Europe, including ICDS’ “security and resilience-related programs in Ukraine.”

“For us, [it] was and still is important to maintain good relations with various academic partners and recognised experts in Ukraine,” Tepernik told Bellingcat via email. “Some of them were present at the Resilience League event last year – that was the reason we accepted the invitation to join the event.”

Nonetheless, ICDS figures have appeared alongside not only members of C14 and its affiliated Education Assembly, but also C14’s leader Yevhen Karas. Photos and video from last year’s summer school show C14’s leader Yevhen Karas not only in attendance, but appearing in front of attendees alongside ICDS member Grigori Senkiv (also the director of the NCDSA) and Teperik. Education Assembly’s logo, containing elements recognizable from C14’s logo, is also on branded content and signs visible at the seminar, just above ICDS’ own logo. 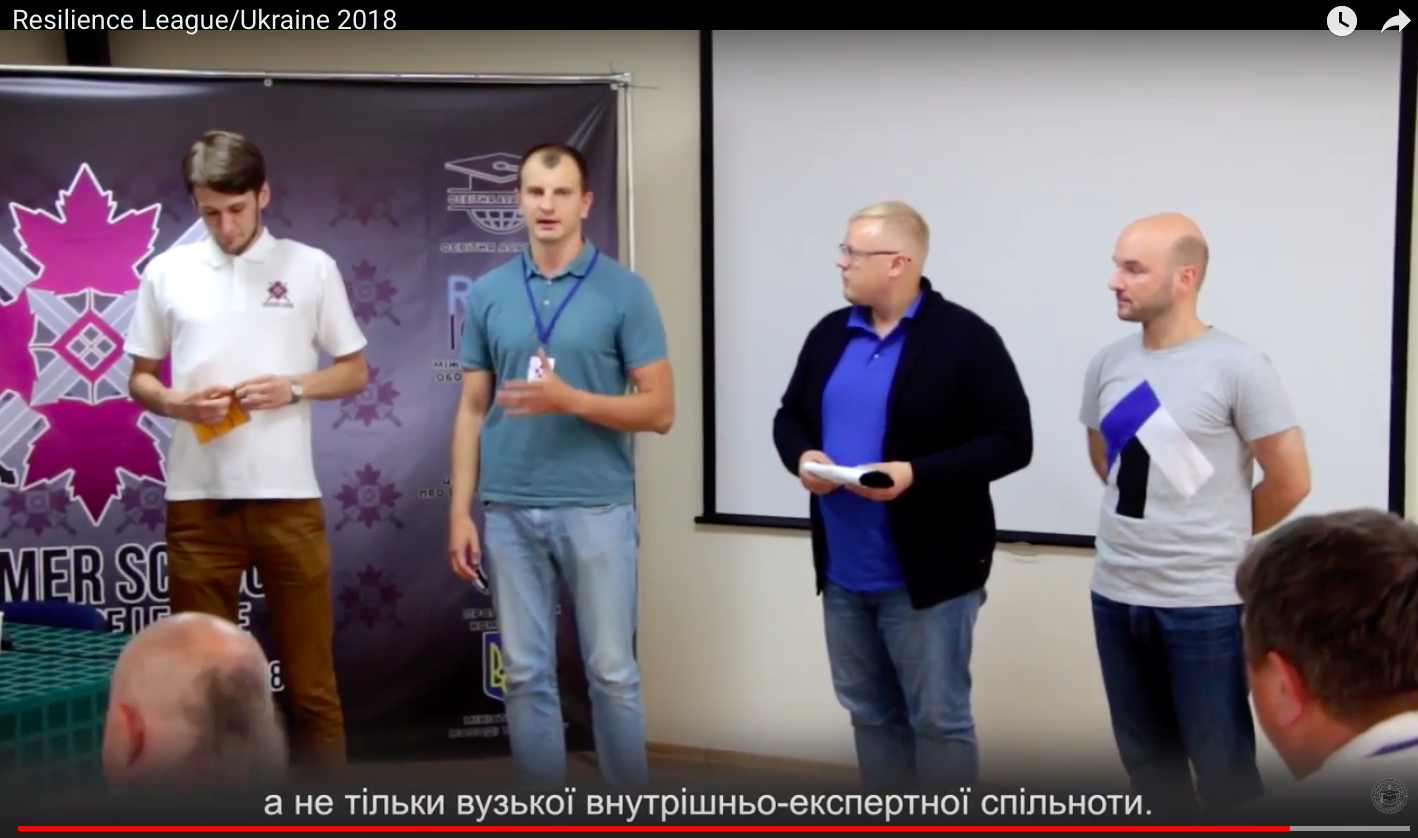 Yevhen Karas is a former soccer hooligan with a long history of violence, both glorifying it and taking part in it himself. For example, just two months after the 2018 summer school at which he appeared, Karas posted on C14’s Telegram channel and boasted that, a few months before, he had personally assaulted a group of men sitting in a public park; according to Karas, the men had been making disparaging comments about Ukrainian nationalists between themselves. Karas described how he went back to his car, donned a C14 bandana and a stab-proof jacket, then snuck through the bushes and pounced on the men, attacking them with pepper spray and his fists. Similar to what we observed in our previous investigation, actions like these, especially with the help of NPE funding from the Ukrainian state, may help C14 put on more events, increase its profile, and recruit new members. The way that both the 2018 and upcoming 2019 summer school events have been promoted across C14’s social media accounts suggest that the far-right organization’s leadership is well aware of this, perhaps exploiting the prestige of the ICDS and NCDSA brands as a promotional tool to try and gain legitimacy.

C14’s reputation for violence and extremism is well-documented. Two members of C14, Andriy Medvedko and Denys Polishchuk, are currently on trial for the high-profile 2015 murder of Ukrainian reporter Oles Buzyna, though both deny the charges. Moreover, despite their name evoking the neo-Nazi ’14 words’ slogan and referred to as a “neo-Nazi” organization by former members and experts of extremism, C14 insists it is a not a neo-Nazi group; they have even sued a Ukrainian media outlet for calling them neo-Nazis on Twitter. In October 2018, a leading member of C14 — Serhiy Mazur, who was also present at the April 2018 pogrom at the Roma camp — posted a video on Facebook of what he called a “purge of Gypsies at the capital’s railway station.”

Still, groups linked to Karas and C14 continue to receive funding from Ukraine’s Ministry of Youth and Sport for “national-patriotic education,” despite the Ministry’s own statements that it is steadfastly against “xenophobia and racism.”

In a written reply to Bellingcat’s previous report about funding for “national-patriotic education,” Ukraine’s Ministry of Youth and Sports told Bellingcat that their official website “routinely publishes calls to representatives of the media and concerned public to monitor implementation of projects by civil society institutions, and to inform the Ministry of any violations of Ukrainian laws.”

“It is emphasized that in case reports [on violations] are confirmed, funding will be returned to the state budget.”

“If there is a court ruling banning a particular civic organization,” the Ministry continued in its response to Bellingcat, “the decision of the Commission that allocated state funding for NPE projects of such an organization will be canceled.”

Despite both C14 and National Corps-linked organizations’ documented links to violence in both Ukrainian and international media, it appears that no action to return funding to the state from organizations like Education Assembly has been undertaken. 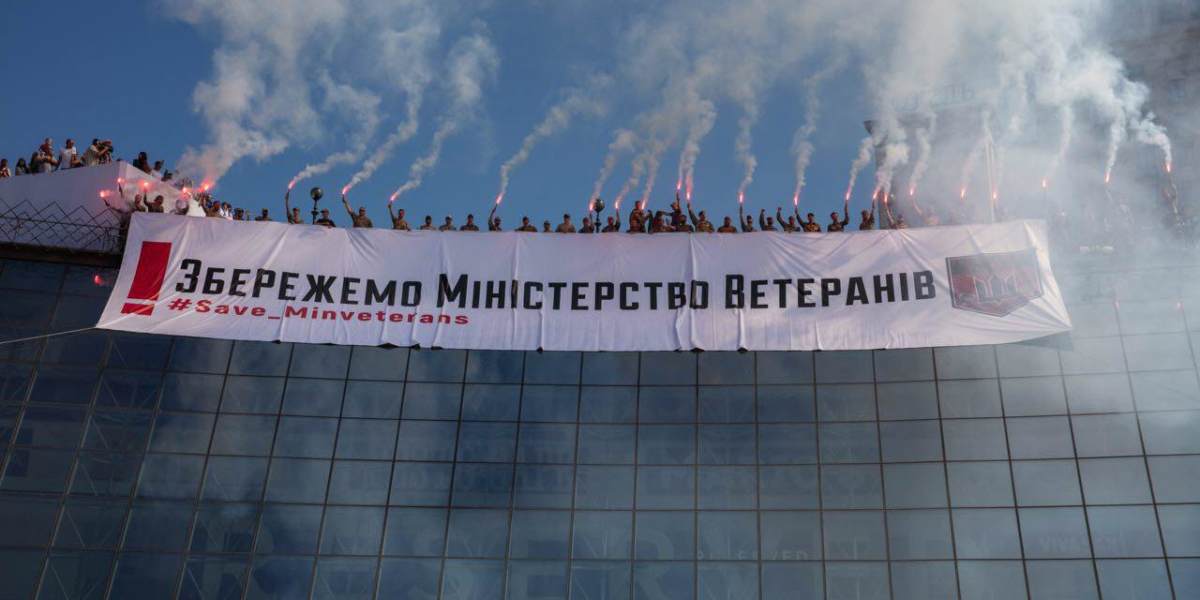 Ukraine’s Ministry of Veterans Affairs Embraced the Far Right – With Consequences to the U.S.

How to Mainstream Neo-Nazis: A Lesson from Ukraine’s New Government 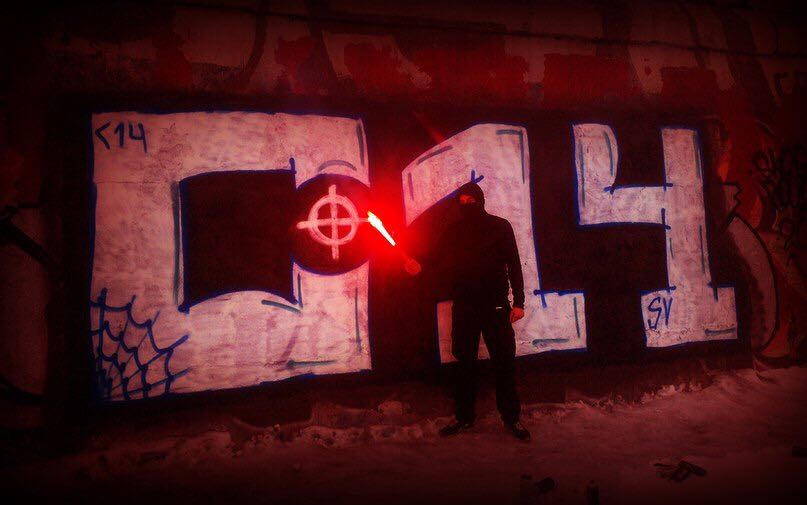