Following the recent publication of information about the two suspects in the attempted assassination of Sergei Skripal a number of attempts have been made to debunk the evidence, most notably from the informal network of individuals and websites who have a long history of pushing conspiracy theories about other allegations against Russia, such as the downing of MH17.

The recent release of information on the incident included multiple images from CCTV cameras that allowed the police to track the movements of the two suspects from the airport they arrived at, to Salisbury, then back to the airport immediately after the assassination attempt. Two of these images caught the attention of the denialists and conspiracy theorists, showing the suspects passing underneath a CCTV camera at exactly the same time: 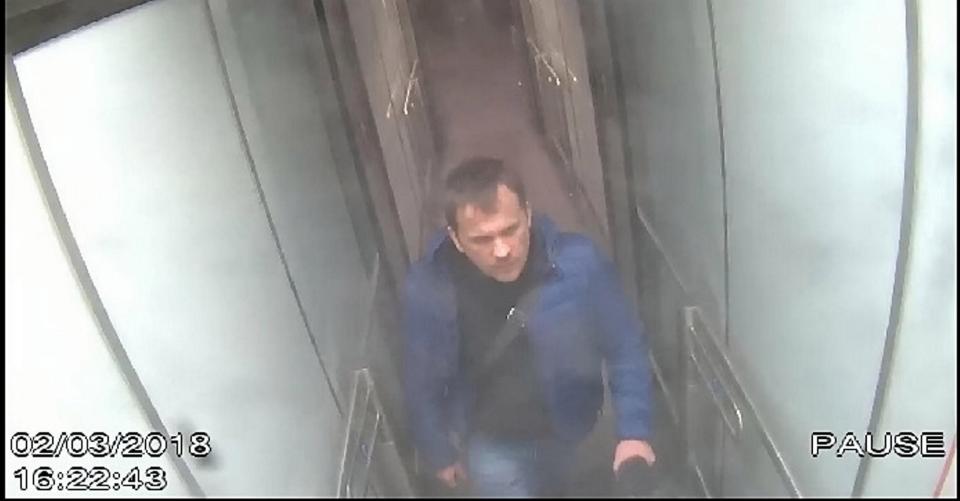 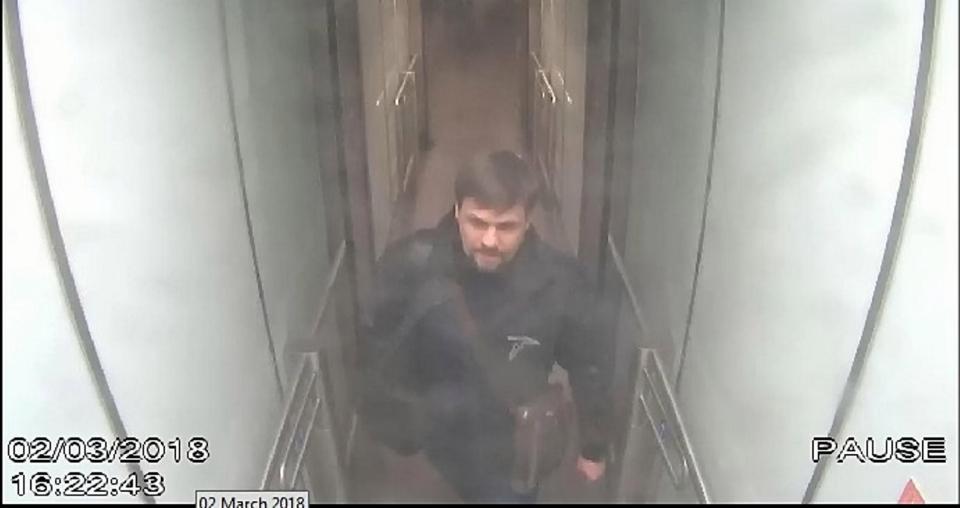 A number of bloggers with a long history of sharing conspiracy theories in defence of Russia claimed these images were proof that there was something suspicious about the UK’s evidence:

New on MoA:
There Is A Strange Timestamp In The New Novichok 'Evidence'https://t.co/05LE8YrRsz pic.twitter.com/clLuHhpVAE

The basis of this claim was that the images showed the same location, but at exactly the same time, so it would have been impossible for both individuals to be stood in the same location at the same time. Unfortunately for the conspiracy theorists, this conclusion was based on a fundamental misunderstanding. The images show the suspects as they’re passing through Gatwick airport, specifically the non-return gates that are at the terminal exits. Photographs of the type of gates in question can be found on the Marco Airport Facilities Group website in a case study about the installation of the gates at Gatwick airport: 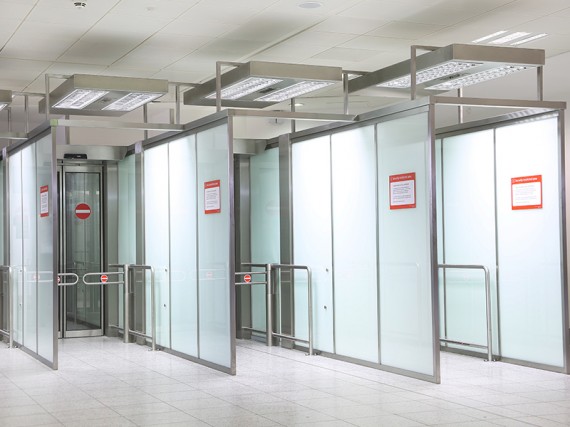 Another set of gates in the same style are found elsewhere in Gatwick Airport: 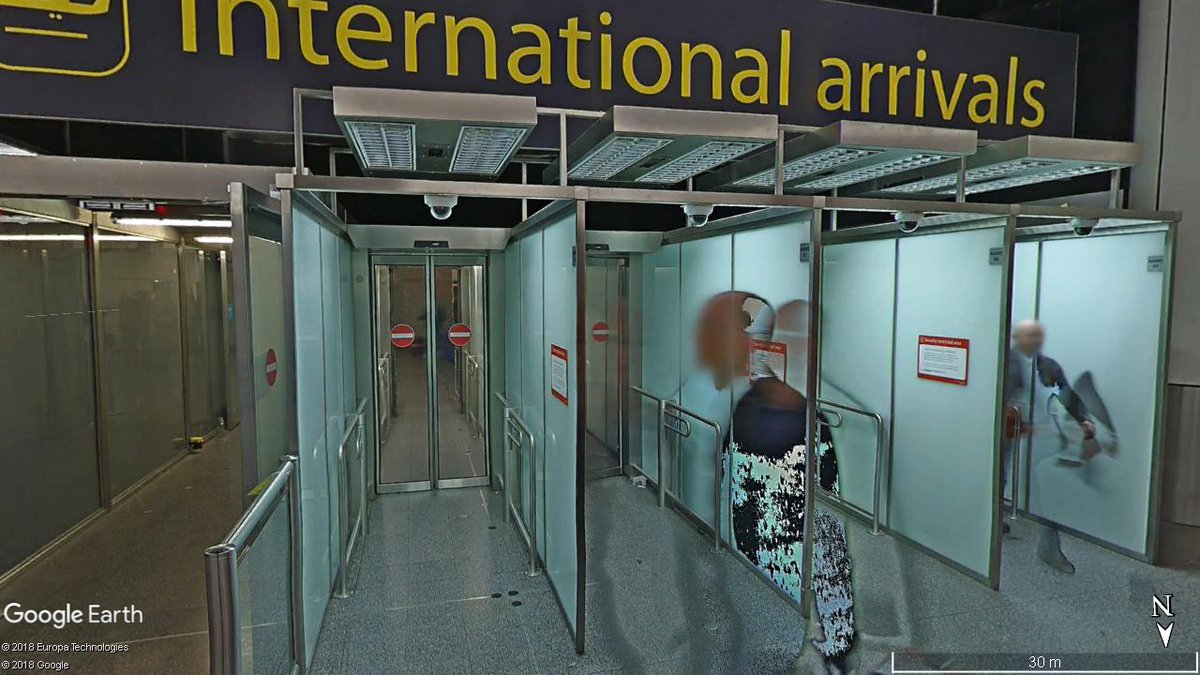 It is clearly visible there are multiple parallel gates that would have allowed the two suspects pass through the gates at the same time, and this fact resulted in some of the conspiracy theorists retracting their theories.

However, this didn’t stop Russian Ministry of Foreign Affairs Spokesperson Maria Zakharova repeating these same debunked claims to the Russian media. In a live interview with Russia 1’s 60 Minutes Zakharova explicitly states the corridors in both CCTV images are in fact the same corridor, so it would be impossible for both suspects to be in the corridor at the same moment as the timestamp suggests, citing this as one of many supposed “discrepancies” in the UK’s evidence. Zakharova described this as “god-level trolling” by UK authorities.

It’s impossible to know if Zakharova was just repeating the debunked theories of internet conspiracy theorists, or this was a theory the Russian Ministry of Foreign Affairs had come up with themselves. The way in which the Russian Ministry of Foreign Affairs and Russia’s various embassies engages with the community that was sharing these theories through social media would suggest they certainly would have been exposed to the claim, and it certainly wouldn’t be the first time Russian officials had cited internet conspiracy theories in their official capacity.

Following the downing of MH17 in Ukraine in July 2014, the Russian Ministry of Defence gave a press conference, presenting what it claimed was its own evidence about the crash. This included a claim that one video showing the Buk missile launcher that shot down MH17 passing through separatist controlled Luhansk was in fact filmed in another part of Ukraine, in a town under the control of the Ukrainian government. This theory had in fact first originated on Russian internet forums, and had gone viral among pro-Russian conspiracy communities. It seems extremely unlikely that the Russian Ministry of Defence would have come up with the same erroneous conclusion (and presented edited images to support its claim) independently of the internet conspiracy, so it is clear where they got their claim from, internet conspiracy theories.

In an earlier example Russian government officials made multiple claims about the August 21st 2013 Sarin attacks in Damascus that were based on conspiracy theories and internet rumours. For example, two days after the attack, Russian Foreign Ministry spokesman, Aleksandr Lukashevich made the following claim:

More new evidence is starting to emerge that this criminal act was clearly provocative. On the internet, in particular, reports are circulating that news of the incident carrying accusations against government troops was published several hours before the so-called attack. So, this was a pre-planned action.

The claim videos from the August 21st attack had been uploaded onto YouTube before the attack had begun circulating immediately after the attack, as a number of the videos were displayed on YouTube with the date of August 20th. This led to the claims about videos being uploaded before August 21st, which was for a short while popular amount pro-Assad conspiracy theorists. However, this was actually a result of the date displayed on YouTube being based on the location of the server, in this case the west coast of the USA, so any videos uploaded early in the morning in Damascus, at the time the attack took place, would be displayed as being uploaded the day before because of the time difference.

The question remains as to whether or not Maria Zakharova’s statement was based on genuine, if extremely bad, analysis by the Ministry of Foreign Affairs, or if all the Ministry of Foreign Affairs could muster in its response to the UK’s allegations where some conspiracy theories it stole from the internet. Perhaps it was Zakharova’s own attempt at “god-level trolling”, but it is clear that in the face of evidence from the UK, Russia’s response has been worse than that of internet conspiracy theorists.