The Baltic Way: Sedition, Propaganda and Discontent in Latvia

Stradling itself between Europe’s north and its east, Latvia occupies a unique cultural and geographic space in Europe, finding itself part of German, Swedish, Polish, and Russian empires at different times. This history colors contemporary understanding of the country and its identity, especially in regard to its eastern neighbor – Russia.

Latvia has one of the highest percentages of ethnic Russian in the former Soviet space. In contrast to their Estonian neighbors, ethnic Russians are populated across a wider geographic area. Many live in the capital of Riga, but a large number also reside in the easternmost region of Latgale. With gross wages and salaries in Latgale at 609 euros in the first quarter of 2017, it is the poorest region in one of the EU’s least affluent member states.

After the collapse of the Soviet Union, Estonia and Latvia both enacted citizenship rules that many considered to be strict. A solution in Latvia was to tie parts of citizenship with Latvian language fluency, creating a challenging barrier for many native Russian speakers due to the distance between Latvian (Baltic) and Russian (east Slavic) among Indo-European languages.

Of concern to Latvian authorities during the Ukraine Crisis was the idea of a “Latgalian People’s Republic” being established in the region. Such ideas were promoted on Russian state television by shadowy activist Alexsandrs Gaponenko, a figure explored near the end of this article. These ideas have taken root in small, fringe corners of the Russian internet, as well as in communities on the Russian social network Vkontakte (VK). 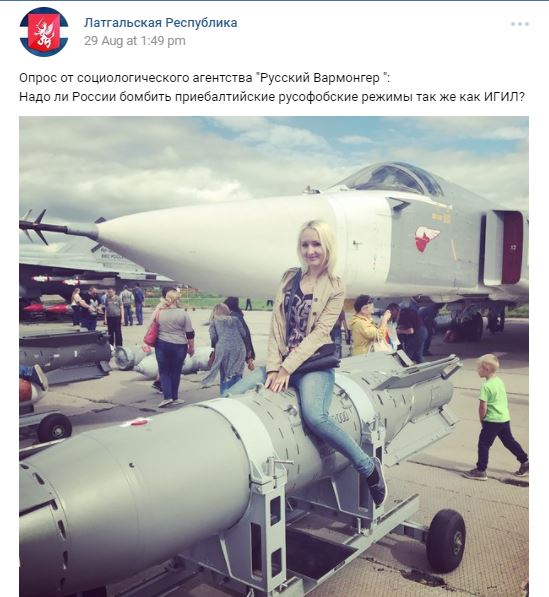 A VK page for the People’s Republic of Latgale asks readers if Russia should “bomb Russophobic Baltic regimes like they are Islamic State?”

With a population of under 100,000, the largest city in the region, Daugavpils, serves as a useful microcosm for understanding Russian-language media and propaganda in Latvia. What kind of Russian language media exists in eastern Latvia, what is the reach of these outlets, and who are some of the characters involved?

Yuri Alekseev is a bit of an eccentric man. On his Facebook page, he documents his adventures befriending lost kittens, mocking statues of Bill Clinton, and spending time with his family to his thousands of followers. Alekseev runs imhoclub.lv, a news portal and forum for fringe opinions. Imhoclub.lv serves as an online haven for its self-declared political analysts, journalists, psychologists, economists, and astrologers. The most prominent among this group are the self-professed political analysts and journalists.  Essays on socio-political issues are featured daily on the homepage. The articles often having a very distinct viewpoint overlapping with views found in Russia’s media landscape. Examples include accusations that Latvia is sympathetic to Nazism (see: “Gruppenfuhrer SS declared Messiah of the Latvian nation”), that the Baltics legally belong to Russia (see: “The Baltics legally belong to Russia.”)

With about 6,400 users, imhoclub.lv is not shifting mainstream public opinion anytime soon. Nevertheless, the site has an impact on wider discourse.

In Alekseev’s most (in)famous article, he insinuated a Canadian colonel was homosexual and contrasted him to a convicted murderer pictured in women’s underwear. Originally published on imhoclub.lv, then later gained traction after being republished in Vesti.lv a prominent Russian-language news portal in Latvia

Imhoclub.lv’s other contributors are no stranger to controversy. Vladimir Linderman, who has written for imhoclub.lv since 2011, fled to Russia in the mid 2000s after being charged with a plot to overthrow the state and possession of explosives for which he was wanted by Interpol. Linderman disputes the claims he planned to assassinate Latvia’s former president Vaira Vīķe-Freiberga with explosives.

Linderman at one of his numerous appearances in front of a Latvian courts.

Since returning to Latvia, Linderman has taken up the cause of official recognition of the Russian language in Latvia and autonomy for Latgale.

In an interview over Skype, Martins Kaprans of the University of Latvia said that vesti.lv is the most “sensationalist” of Latvia’s mainstream news portals. I decided to assess this claim by examining the themes and editorial focus of articles across the different news portals.

This approach was chosen after preliminary attempts using social media platforms such as Twitter proved too small. Beyond the five outlets chosen, there others which were considered for data collection. The portals mixnews.lv and baltnews.lv were considered, but ultimately were shelved due to time constraints.

Looking at the articles collected in the dataset, it became quickly apparent that grani.lv, a Daugavpils based outlet, was focused on local issues. Throughout the first week, grani.lv featured traffic accidents and updates on the local motorcycle track as prominent morning stories on their website. Whereas other sites in the dataset may put political issues at the forefront of their website, grani.lv placed focus elsewhere.

The local Gorod.lv was similar in its focus on local issues such as traffic accidents and local politics in Daugavpils. Where it differed was its willingness to wade into controversies about the Russian language, a heated issue for many locals denied full citizenship by Riga. Open examples of editorializing the issue were infrequent, especially compared to other websites in the dataset.

Delfi.lv was the most international of the five outlets. Prominent stories focused on topics geopolitics as well as regional security issues. Articles on sports were relatively popular with commenters. Likewise, stories about the weather got attention in the morning. Tone on issues of international relations and politics was not dissimilar to other Western outlets.

The tone and focus of the above three outlets stood in stark contrast to vesti.lv and imhoclub.lv. These sites focused more on regional issues, with perspectives often rhyming with those found in Russian state media.

Vesti.lv took a sensationalist tone focusing on nude models, alleged Nazism, the musings of Vladimir Putin, and the Russian language in Latvia. An exhaustive list would amount to a large proportion of the site’s output. Editorialized and sensationalized headlines were daily and corroborated the perspectives Kaprans gave.

The outlying articles on imhoclub were the most extreme of all the outlets, with articles ranging from implying NATO soldiers may use rape as a weapon of war, to travelogues. The broad trends however focused on demographic issues, Russian language in schools, and the controversial non-citizens policy. 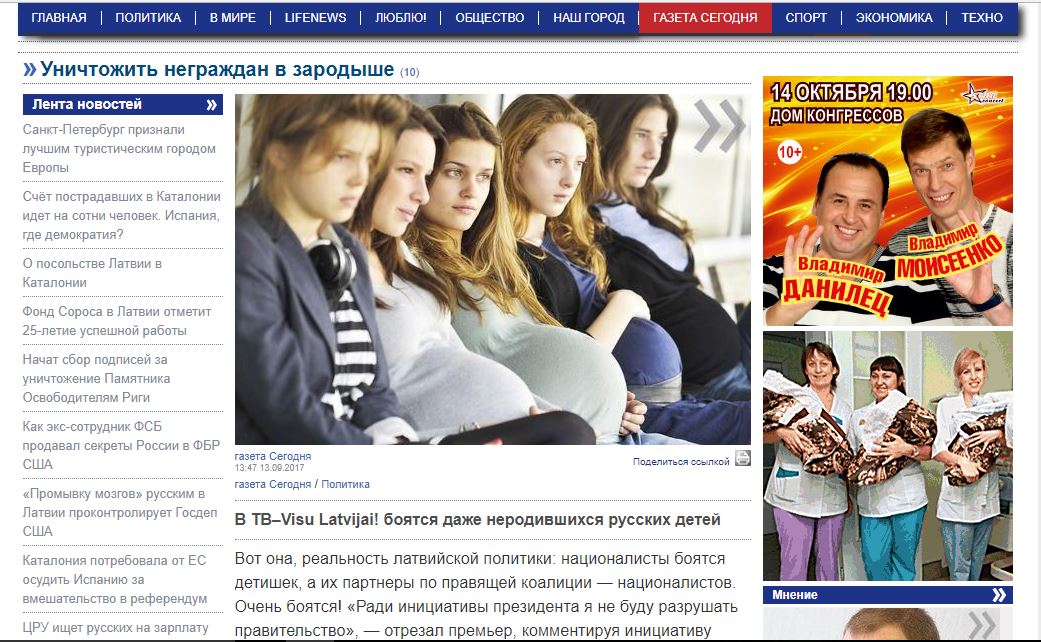 “Destroy Non-Citizens in the Womb”

Rudimentary thematic content analysis, however, provides only part of the picture. Content analysis is useful for understanding what authors and editors emphasize as important, but not a site’s reach or the dedication of their user base.

The data shows that at least in the internet space, Russian-language news sites expressing views sympathetic to the Russian government have a smaller impact than the delfi.lv news service. Larger outlets such as vesti.lv, however, have a larger number of total views than smaller local outlets gorod.lv and grani.lv.

While a Latvian equivalent of Nielsen ratings was unavailable, Kaprans said that channels such as Perviy Baltiskii Kanal are popular amongst portions of Latvia’s russophone population. With the Latvian government hesitant to fund any public access programs in Russian, older people with less access to resources rely on news sources from Russia.

The idea that these channels have an impact is borne out but polling data. An independent opinion poll released early this Summer showed the Delfi newsportal and Perviy Baltiskii Kanal as the two most trusted sources of news among non-ethnic Latvians with 18% and 15% of respondents put these outlets among the “three most trustworthy” in the country. 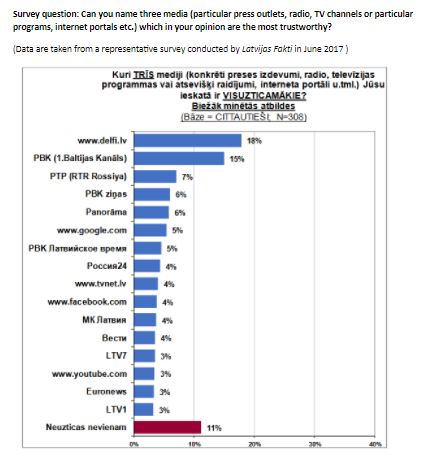 Beyond news programs, the Perviy Baltiskii Kanal features a number of game shows and television serials popular on Russian television.

The third most trusted news source in the poll, RTR Rossiya, was banned for six months by Latvia’s National Electronic Media Council. The council accused RTR Rossiya of broadcasting hate speech after guests alleged Ukraine was committing genocide in the Donbass.

Despite the low readership and fringe themes put forward on imhoclub, the website is a microcosm of the those connected to Russian think tanks and pro-Russian language NGOs, the most prominent among these being connected to Alexander Gaponenko.

The co-chairman of Latvia’s “Non-Citizen’s Congress” and director of the “Institute of European Studies,” Gaponenko’s work is widespread amongst the small community of pro-Russia activists in the Baltics. He has appeared as an expert on different programs – such as RTR Rossiya – to comment on alleged violence against Russian speakers in Latvia.

Produced with the aid of the Institute of European Studies, Gaponenko produced a film entitled Ostland: Night under Swastikas in 2013. Produced in Russian and shown in the russophone enclave of Daugavpils, the film focuses on collaboration with the Nazi regime that occupied Latvia during World War II.

The film, named for the Reichskommissariat regime in the Baltics, was nominated for “Best TV or Radio Project” by the Foundation for the Support and Protection of Compatriots Abroad. The Foundation focuses on the legal status and protection of human rights for Russian speakers in the former Soviet Union. 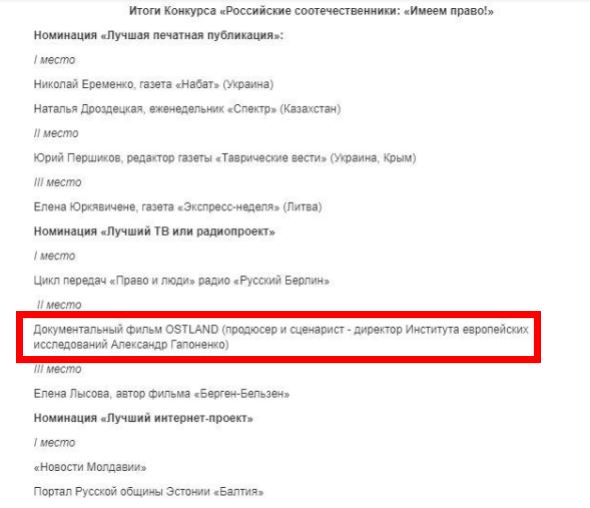 A contest by the Foundation for the Support and Protection of Compatriots Abroad nominating Gaponenko’s film for best TV or radio project.

It is unclear whether ‘Ostland’ was funded Foundation for the Support and Protection of Compatriots Abroad, as the site has stopped updating which projects are receiving grants.

When asked via email whether the Foundation provided financial support for the project, I was told to contact Mr. Gaponenko. Subsequent questions to the Foundation about current projects in the Baltics did not receive a response.

I reached out to Mr. Gaponenko via email for comment. When asked whether his projects received funding from the Foundation or other arms of the Russian government, Gaponenko did not answer the question.

In a separate interview with the OCCRP associate Re:Baltica, Mr. Gaponenko admitted to receiving money from the Russian government.  The Compatriots Fund, in conjunction with other institutions such as Russkiy Mir, Gorchakov Fund for Public Diplomacy, and Rossotrudnichestvo, act as arms of the Russian government to promote public diplomacy in the former Soviet Union. These institutions were accused by the Latvian special services as providing cover for the actions of the Russian special services in their annual report for 2016.

Content Warning: Link 5 from September 27th contains Not Safe For Work material. The website vesti.lv published a series of full nude photo shoots of the Mayor’s assistant on their frontpage.