Since the July 17, 2014 downing of Malaysian Airlines Flight 17 (MH17), Bellingcat has published numerous articles concerning the anti-aircraft missile launcher that downed the passenger plane–Buk 332, of Russia’s 53rd Anti-Aircraft Missile Brigade. This Buk missile launcher (TELAR) was previous dubbed “Buk 3×2” due to an obscured middle digit, but after a May 3, 2016 report, we established that the middle digit was originally a “3,” making the identity of this Buk clear. This report identified many of the details that allowed us to identify Buk 332, using materials as far back as 2009 and relying heavily on photographs and videos showing Buk 332 in a June 2014 convoy that traveled from near the missile launcher’s base in Kursk to Millerovo, near the Russia-Ukraine border. These details include the shape of the side skirt, a hollow wheel among spoked wheels on the right side, a dent in the left front panel, the arrangement and connections of electricity cables, the font and wider spacing of the digits of the unit designation, oil and soot stains, and white transport marks on both side skirts. The white gravity mark (appearing like a cross-hair) and transport mark on the left side of the vehicle were not unique for this vehicle in the convoy, but were clearly visible on Buk 332 both in the June 2014 convoy in Russia, and in July 17 and 18 photographs and videos while in eastern Ukraine. However, while photographs of Buk 332 uploaded on social media profiles of soldiers of the 53rd Anti-Aircraft Missile Brigade showed the white gravity mark, they did not show the white transport marks on the side of the vehicle and the side skirts.

Following a tip from Twitter user @Sl0zhny, Bellingcat was able to find the “missing link” photograph that shows these white transport markings on Buk 332 from before the June 2014 convoy. A photograph taken by a Russian mechanic, likely in the spring of 2013, shows Buk 332 with the same white transport markings that were on the Buk while in Ukraine shortly before and after the downing of MH17. This photograph is the last discovered image of Buk 332, showing its non-obscured unit designation and transport markings, before the June 2014 convoy, when the middle digit of its unit designation was painted over. The white digits, gravity mark, and transport marks in this photograph are in the same location as in photographs and videos of Buk 332 while it was in Russia in June 2014 and in Ukraine in July 2014. 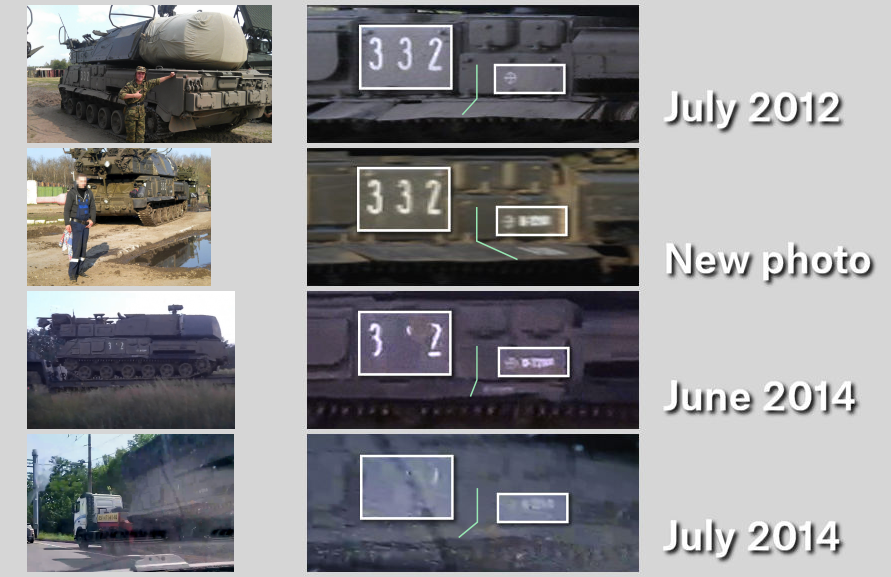 Comparison of markings on the same side of Buk 332, from July 2012 to 2014. Highlighted are (from left to right): the unit designation number, which was obscured in the summer of 2014; the gravity mark (a cross-hair); an over-sized load rail transportation marking (H-2200). Note that some images photographed at an angle were flattened in the comparison above in order to align the markings. Due to parallax (a displacement of the apparent position due to the perspective and the flattening), the marks on the white sideskirts appear in different places, but are actually in the same position.

This Buk missile launcher was identified as Buk 332 from the 53rd Anti-Aircraft Missile Brigade (military unit 32406) due to these common features. The mechanic’s photograph was taken at a vehicle yard of this brigade, as we can determine with the help of another photograph from the same area, uploaded by a cadet in August 2014. This photograph shows the same pink colored Krug missile container, visible in the mechanic’s Buk 332 photograph. The photograph is geotagged at the vehicle yard of the 53rd Brigade in Marshala Zhukova, near Kursk in Russia, which is correct after cross-referencing the features in the photograph with satellite imagery. 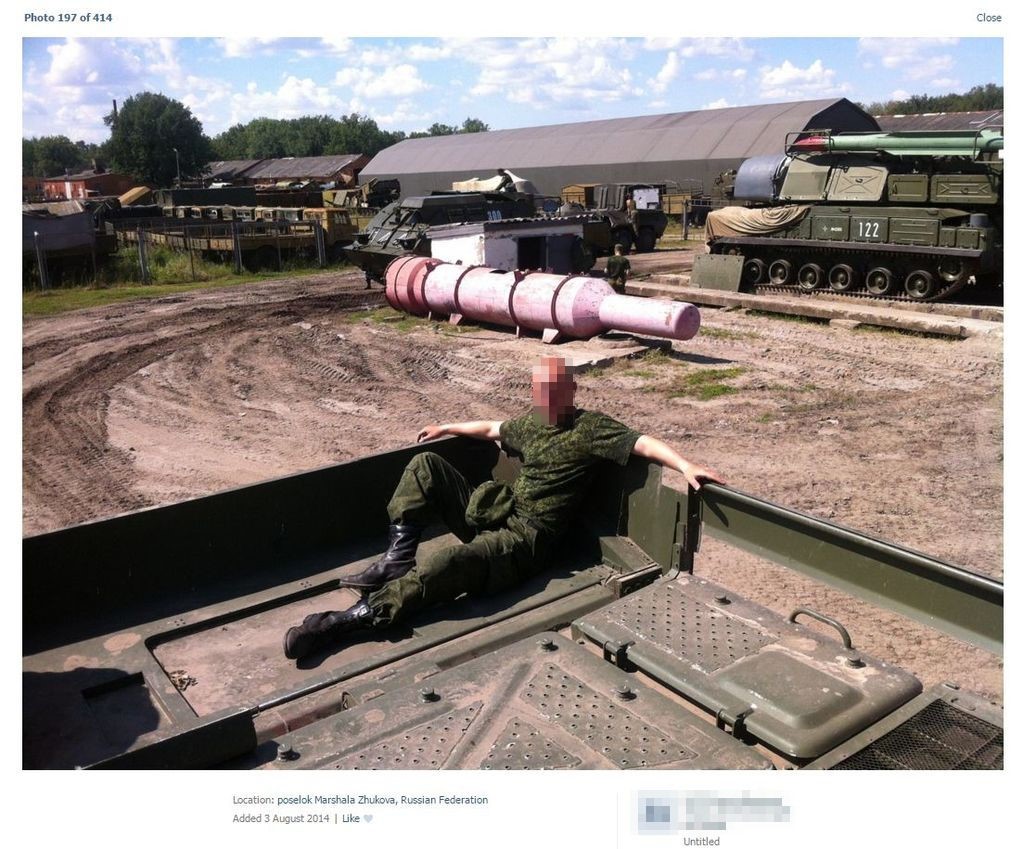 Vehicle yard area of the 53rd Anti-Aircraft Missile Brigade, as seen in a photograph uploaded by a cadet on August 3, 2014. The mechanic’s initially discovered photo album was uploaded in February 2015, but doesn’t give the mechanic’s name or information about when or where the photographs were taken. RBC journalist Inna Sidorkova was able to contact a person who was involved with the photograph. This person confirmed that the mechanic was in this photograph with Buk 332, and that they recalled that the mechanic was in Kursk in 2013. When asked by the RBC journalist if it could have been in 2014, they replied that “it’s possible.” Aside from the Buk 332 photograph, the album shows photographs of a S-300 9A85 transloader, a special purpose vehicle (possibly a 9S52 Polyana-D4), and another Buk-M1 missile launcher. March 31, 2013 photograph from one of the mechanic’s social media profiles showing him sitting on a Buk missile launcher. 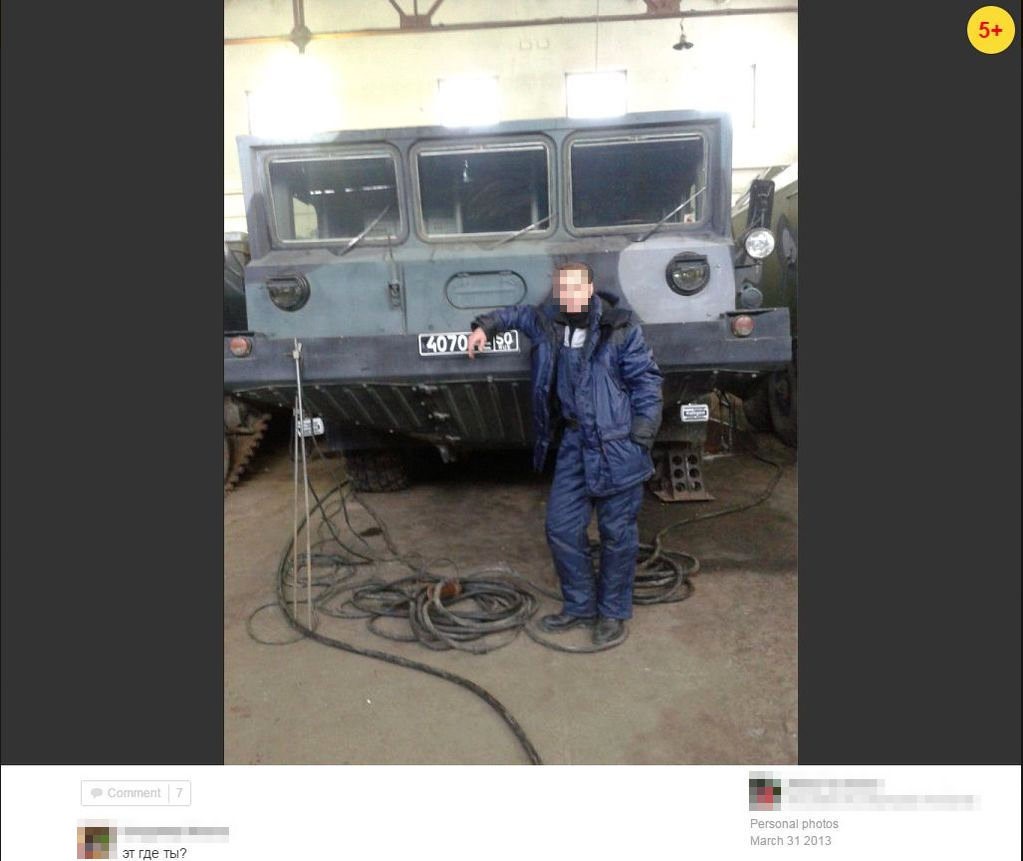 March 31, 2013 photograph from one of the mechanic’s social media profiles showing him in front of a a special purpose vehicle (possibly a 9S52 Polyana-D4). 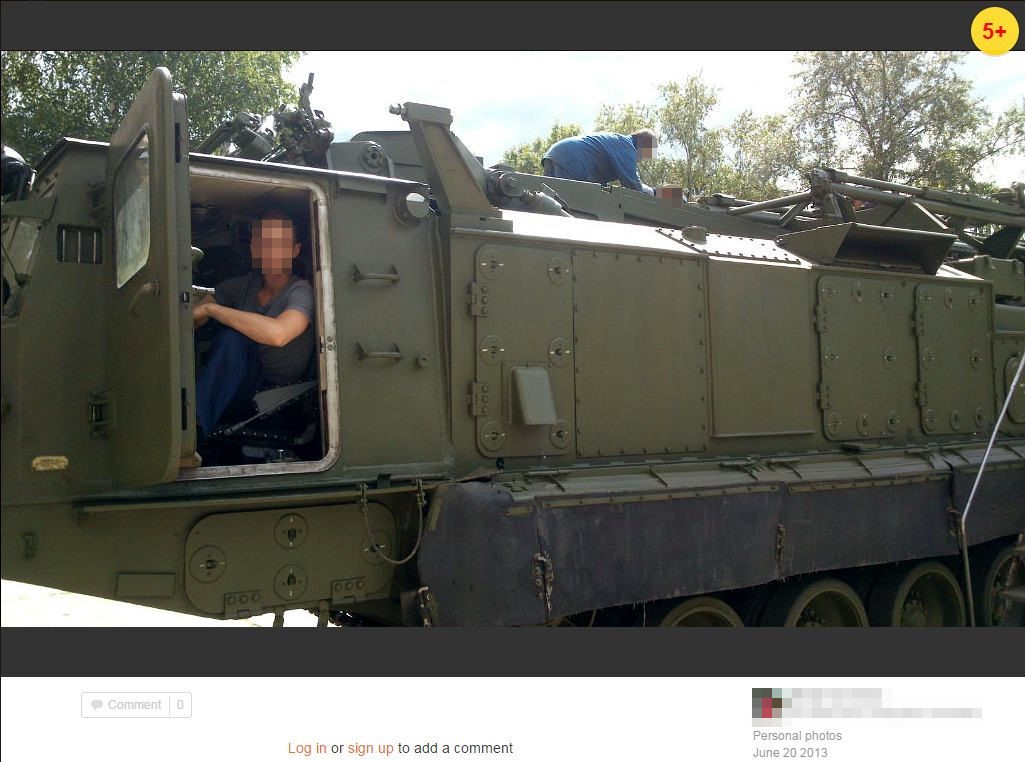 June 20, 2013 photograph from one of the mechanic’s social media profiles showing him sitting inside a S-300 9A83 missile launcher.

These photographs, including the Buk 332 image, were very likely taken around the same time in spring and the early summer of 2013. With these photos all being in the same 2015 album, the non-obscured unit designation number, and the information received by RBC journalist Inna Sidorkova, it is clear that the photograph was almost certainly taken in 2013, but there is a remote possibility that it was taken in spring 2014.