Civilian Shields in Donetsk: Launching Grads near a Residential Area

This report was written in collaboration with the Conflict Intelligence Team (CIT).

The title of this report was modified following feedback regarding the term human shield. The use of Grads in this area of Donetsk endangers civilian lives, but is not intended to meet the legal definition of human shields. The legal term ‘endangering protected persons’ (civilians in this case) is most probably more suitable for this  situation.

On 31 January 2017, the OSCE Special Monitoring Mission to Ukraine recorded the up to now highest number of explosions in the war in Eastern Ukraine. The current hotspot of the fighting, which has led to numerous civilian and military casualties, is the area between Adviivka, controlled by Ukraine, and Yasynuvata, controlled by the so-called “DNR” (Donetsk People’s Republic). The current events mark a new peak in the fighting in this warming winter (1 / 2). The press center of the Ukrainian “Anti-Terrorist Operation” reported that at least 100 Grad rockets were fired by combined Russian-separatists forces in the Donetsk sector on January 31. As this report will demonstrate, recently uploaded videos show least half of these rocket launches, which have been geolocated to a residential sector in eastern Donetsk. Recent satellite imagery and witness accounts confirm the geolocation, revealing the firing locations for Russian-separatist Grad launches.

“10 mins ago 4 Grads fire three packages each from the bypass road and bailed out… BITCHES!!!”
“Grad firing from bypass near Auchan” (source)

The same is reported by a popular pro-Ukrainian blogger, who likely uses a similar group as a source:

“11:15 Grads fired off their salvos from the bypass near Auchan and were off immediately”

As often is the case with shelling, social-media users reported incoming fire from government-controlled Avdiivka, including Grad MLRS, roughly at the same time as outgoing Grad fire was reported from Donetsk:

14:54 Grads fired from Donetsk as soon as the repair brigades went out, those bitches!

Furthermore, a pro-Kremlin newspaper Komsomolskaya Pravda reporter describes hearing Grads (archived) while at a mourning service for killed Vostok commander Ivan “Grek” Balakai on January 31 (see DRFLab report on the circumstances of his death). Later, a friend of the reporter confirmed to her that Grads were constantly firing the night before (January 30) and are based near the Auchan hypermarket. A video from the ceremony posted on the VK community of the Vostok battalion where the deceased commander used to serve confirms that the church is located in the residential area south of the hypermarket (47.989551 37.911307).

Additionally, the church referenced by the Komsomolskaya Pravda reporter is in the same area, marked by yellow in the map below. A comparison of a video produced showing the church service for “Grek” and Yandex Panorama (street view) imagery shows that they are the same church, located near the residential area where Grads were fired.

Figure 1: Location of the Auchan hypermarket (red) and church where service was held for “Grek” (yellow). Digital Globe, Google Earth Five of the videos point to a launch site a bit east of the hypermarket, and video 5 points to a launch site east of the residential block from which the video was filmed. A detailed analysis of the videos reveals that video 1 and 2 – the two videos showing the night Grad launch – quite likely show the same attack. In both videos, a van is visible on the road. In total, at least 15 launched rockets are visible in videos, while around 20 launches are audible. 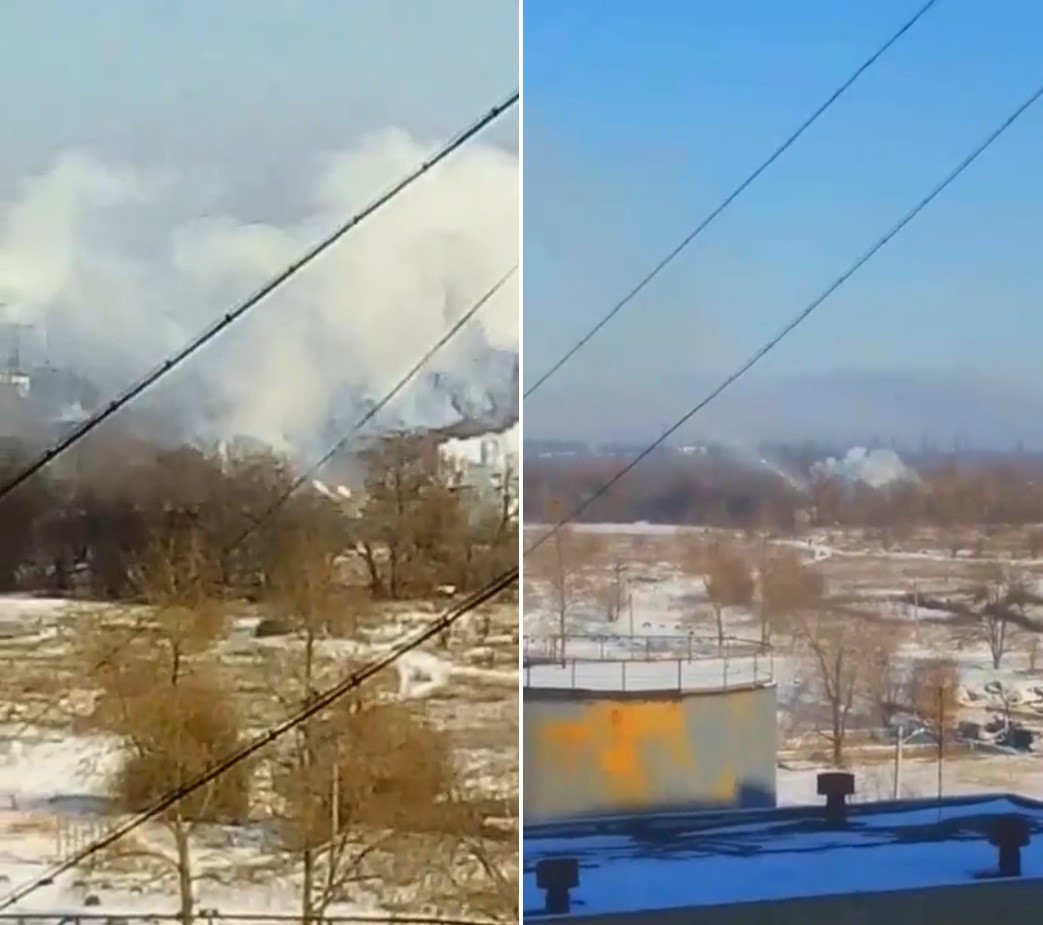 Video 3 and 4 were filmed from approximately the same area of the quarters south of the hypermarket. In both videos, we observe civilan cars driving on a visible bypass. The rocket launch also occurs in approximately the same area. However, both videos most likely do not show the same scene. In video 4, sirens are audible after the launch, while nothing similar is audible in video 3. Also, the dust cloud resulting from the launch has a different form at the moment the last rocket is launched in both videos. Twenty-eight rockets are fired in video 3. At the beginning of this video, a salvo of 8 rockets is launched, and after a brief pause, another salvo encompassing 20 rockets is observed. Given the almost parallel launch of two rockets each in the second salvo, two launchers are likely. Video 4 shows at least 8 launched rockets.

Figure 4: Two frames from video 5, with visible rockets in the sky. Contrast and brightness have been adjusted.

Video 5 shows a different perspective with the camera pointing to the east. In the video, with audible sirens in the background, at least 9 rockets are just barely visible in the sky above the filmed building – almost in the center of frame. The different viewpoint and the trajectory of the visible rockets suggest a different launch site east of the residential area.

Video 6 again points towards the launch site near the Hypermarket Auchan. At the beginning of the video, the visible dust cloud and audible sirens suggest that the preceding salvo was not covered by the video. After a few seconds, a second salvo is fired. At least 7 rockets are visible, but the audible sound suggests that additional rockets were fired.

In total, the five videos published on 31 January 2017 show four different attacks with at least 60 launched rockets from the area. While we can only see this many rockets, the recorded sounds in the videos suggest that additional missiles were launched in these four attacks. At least two different launch locations were used for this attacks. 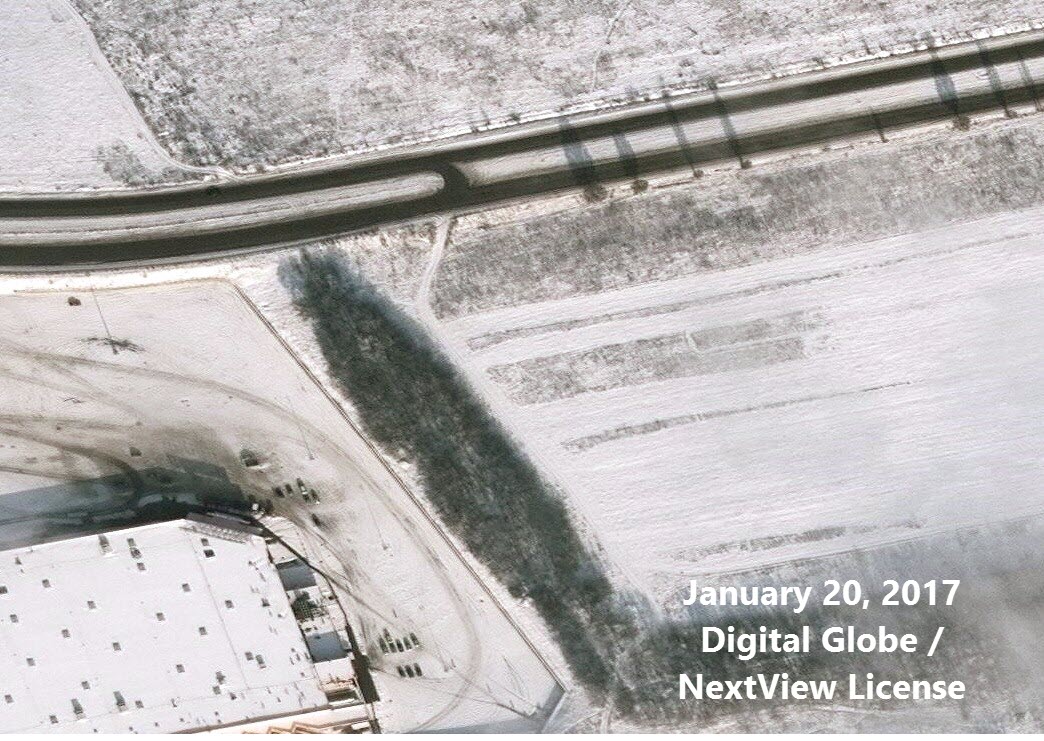 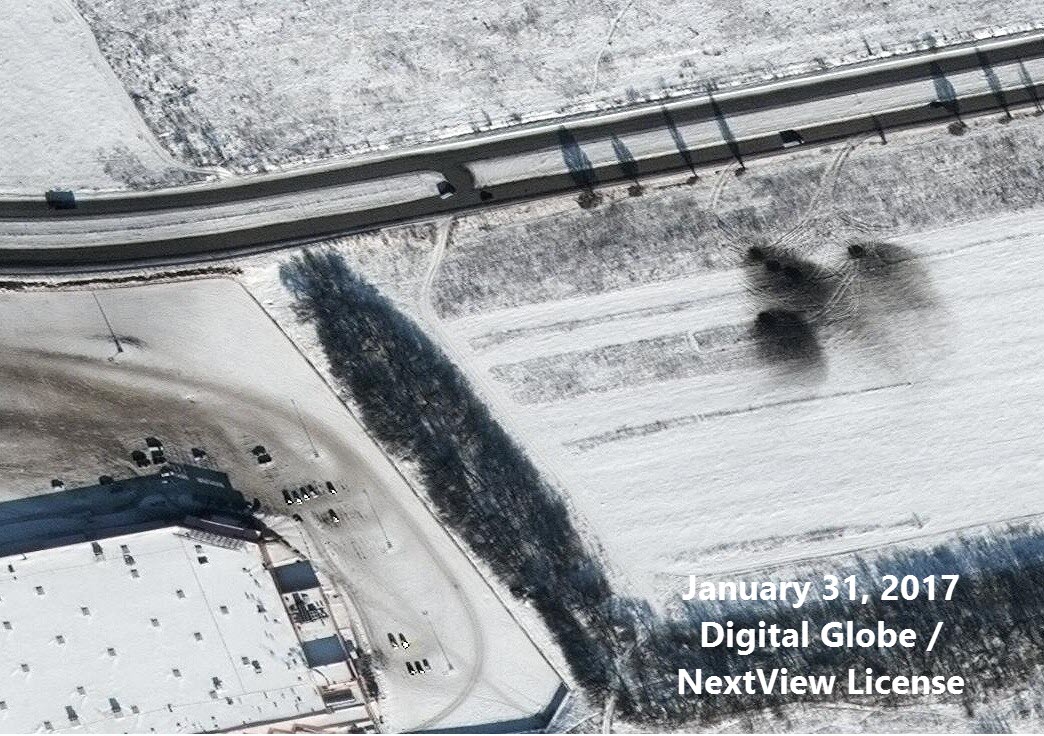 The open area 200 meters east of the hypermarket and 40 meters south of the bypass shows 5 blast marks in the 31 January 2017 imagery. Similar marks are not visible in the 20 January 2017 imagery. The overlapping of the center three marks suggests that the area was used at least three times. The tracks leading to the marks come directly from the bypass. This area corresponds with the rockets launches seen in videos 3, 4 and 6. However, given that video 6 was published on 01 February 2017, this particular attack may not be covered by the available imagery. 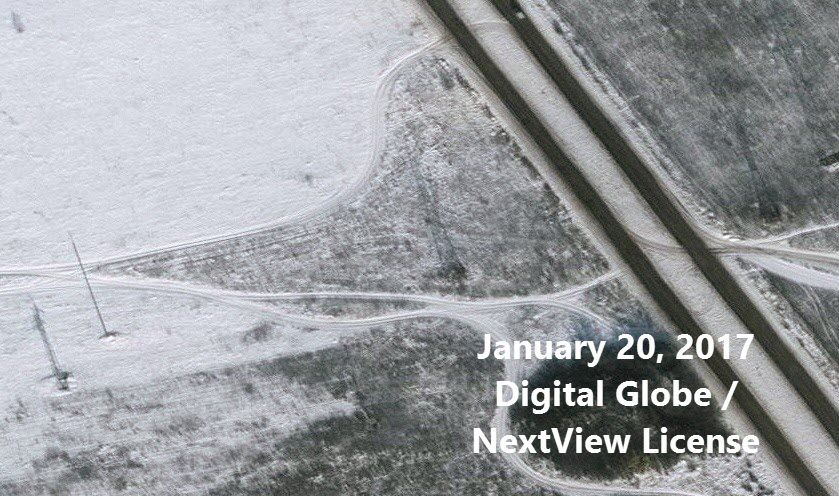 A second launch site could be identified east of the residential areas and just beside the bypass (47.994986 37.932735). The area shows four blast marks. The grouping suggests that two attacks were launched from this position. The 9 visible blast marks indicate that they all used the same firing direction and point approximately toward Avdiivka, which is approximately 18-19 km north-west of the location.

The available evidence clearly documents that on 31 January 2017, multiple attacks with MLR systems were launched in proximity of the hypermarket Auchan in Donetsk. The location deep inside the so-called “DNR” and the firing directing pointing toward Avdiivka clearly document the responsible side for these particular attacks. One launch site is around 200 meters east of the hypermarket, and in fewer than 500 meters from a school and residential area. The second launch site is in proximity of the bypass and around 600 meters from an industrial area and 1000 meters from a residential area. Some of the attacks occured during the day while the nearby bypass was also used by civilians.

Given the proximity of both launch sites to civilian infrastructure in the area, a potential Ukrainian counter attack to surpress and respond to the rocket fire would have automatically risked civilian lives in the area. The cross-country mobility of the likely used MLR system, BM-21 Grad, would have allowed alternative launch sites. However, the repeated usage of the launch site 200 meters east of the hypermarket Auchan strongly suggest that the selection of this area happened on purpose, deliberately risking the lives of the civilians in the area. 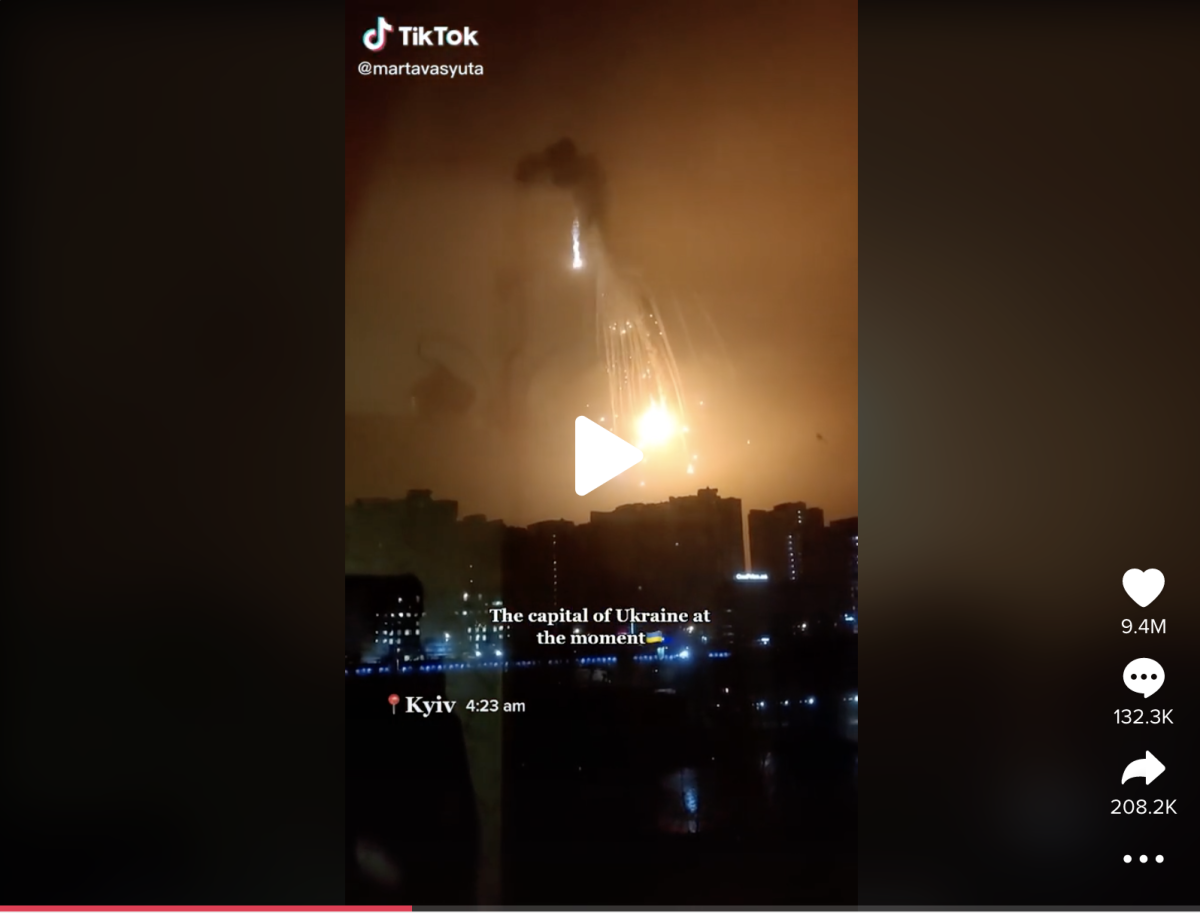