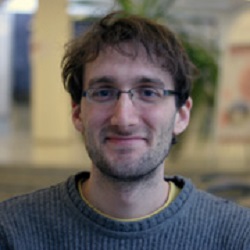 Sean’s work for Bellingcat is focused on the use of artillery systems during the Ukrainian conflict.

Click here for a one-minute introductory map tour that gives the main findings and context of this report.

The below text is an extract from the full report. The interactive data map underlying all of the findings discussed can be found here.

Terms such as civil war or internal conflict are often used to describe the war in Eastern Ukraine. However, the available evidence no longer supports this view. During summer 2014, Ukrainian officials and also the U.S. government were already publicly stating that the Russian military were active in the war. A number of subsequent reports have corroborated these claims, documenting the presence and death of Russian servicemen in Eastern Ukraine, as well as the existence of Russian military equipment inside Ukraine.

In this report, an under-reported aspect of Russian military involvement in the conflict is fully investigated: artillery attacks against Ukraine in summer 2014. In previous reports such attacks were proven to have occurred on several occasions, but these reports could not fully describe the real extent of these attacks. Using open source evidence, this report attempts to document the full scale of the Russian artillery attacks against Ukraine in summer 2014.

Building on the preceding reports, the intention of this report is to document the full scale of Russian artillery attacks against Ukrainian forces in summer 2014. The entire border region in the conflict area was searched for potential firing positions or artillery target sites. In total, hundreds of relevant locations were identified. The main findings can be summarized as follows: 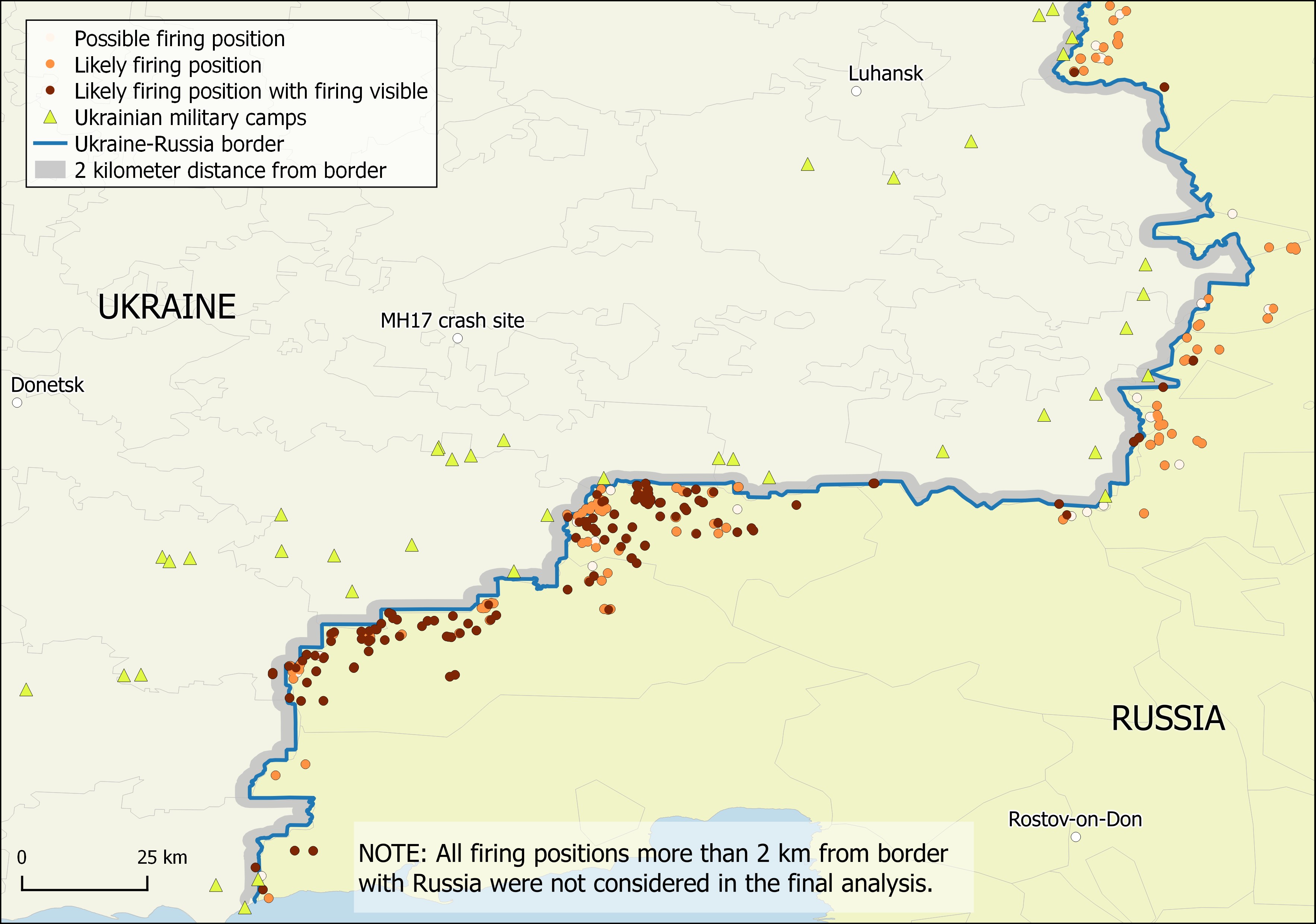 We surveyed the area inside Ukraine within 22 km of the Ukrainian-Russian border in the Donets’k region, and the Luhans’k region border as far as Nyzhnya Vil’khova. Inside Russia, the entire area of the Rostov region adjacent to the search area in Ukraine was surveyed. The search for attack sites or firing positions was done manually, primarily using Google Earth, and repeated for the different satellite imagery dates. Within the search area, 2254 potential relevant sites were identified and considered. 518 of the identified features are artillery crater attacks sites inside Ukraine, while 305 were classified as potential firing positions in Russia or close to the border inside Ukraine. Note that the 305 potential positions describe the number of potential strikes from the positions.

Attack sites within Ukraine were evaluated in terms of size of attack (small: 10 or less visible craters, medium: 10 to 100, and large: >100), date of appearance on satellite imagery, and trajectory. The trajectory was evaluated using a technique based on US military analysis and was similar to that used in previous Bellingcat reports, a scientific report, and as evidence in the court trial of Nadiya Savchenko. Due to time constraints, it was impossible to fully evaluate the trajectories of each-one of the many thousands of artillery craters across the 518 attack sites. Therefore, in order to determine a general trajectory bearing in this report, five craters were selected from each attack site, and the trajectory was evaluated based on this sub-sample. 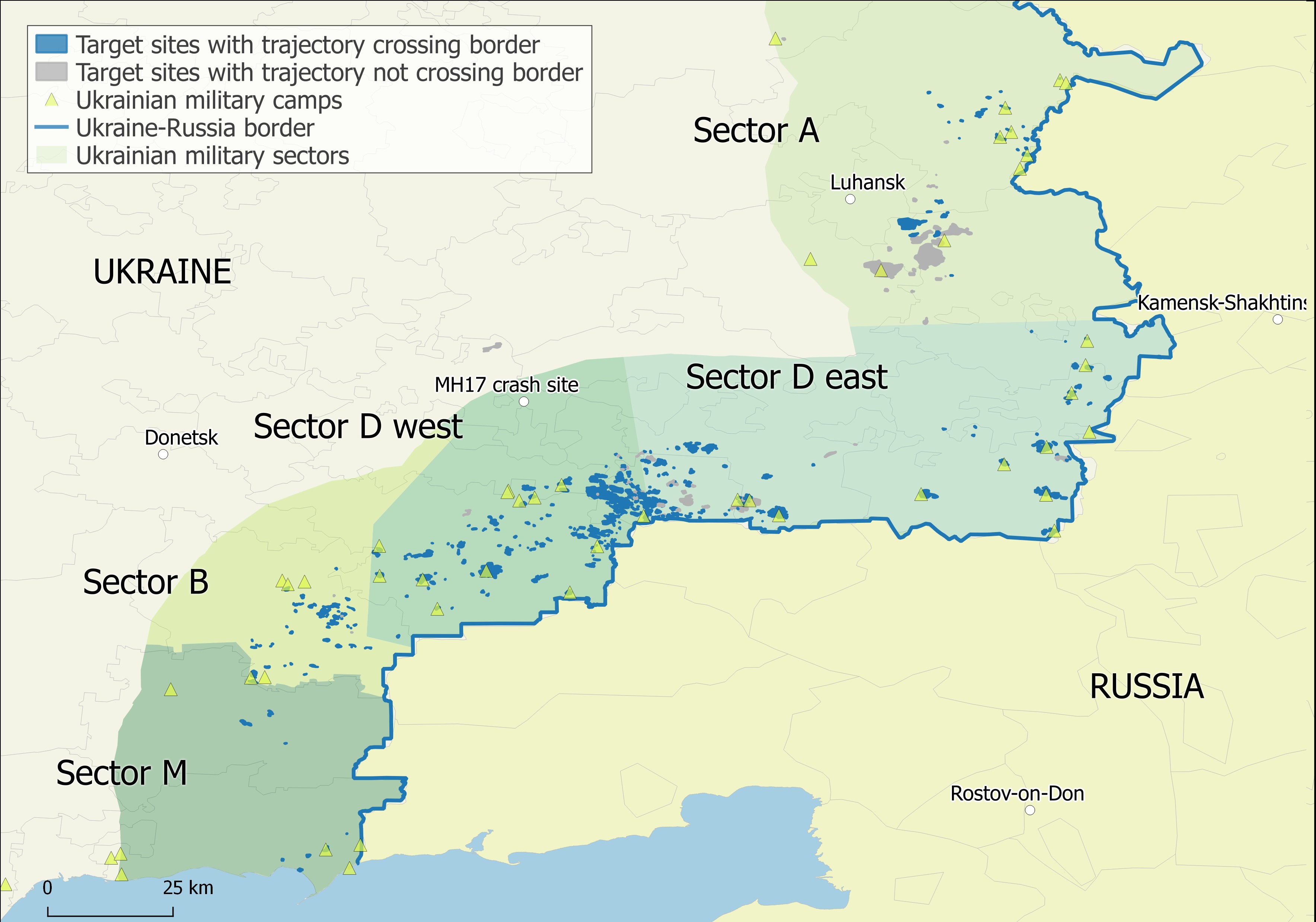 The region with the highest density of likely firing positions is the area around Kuybyshevo, Russia. On the other side of the border (inside Ukraine), the area around the strategic important height Savur-Mohyla and the Marynivka-Kuybyshevo border crossing was contested in July and also August 2014. In July, the supply route for the forward Ukrainian army units based the border area led through this contested area. The Marynivka-Kuybyshevo border crossing was captured by the ‘separatists’ on 14.08.2014.

There is evidence suggesting that some cross-border attacks had already occurred in this area before 17.07.2014. It is also possible to identify some likely firing positions in Russia or inside Ukraine less than 2 km from the border in the available 16.07.2014 satellite imagery. Between 16.07.2014 and 26.07.2014, new likely firing positions, mainly identified as field or self-propelled howitzer positions, become visible inside Russia on satellite imagery. However, it was also possible to identify MLRS blast marks in the area already on 20.07.2014. After 26.07.2014, the satellite imagery coverage of the entire area is less complete. Nevertheless, the many visible firing positions visible on the imagery available to us, shows that the vicinity of Kuybyshevo was used as one of the primary staging areas for cross-border artillery attacks in the summer 2014 conflict. 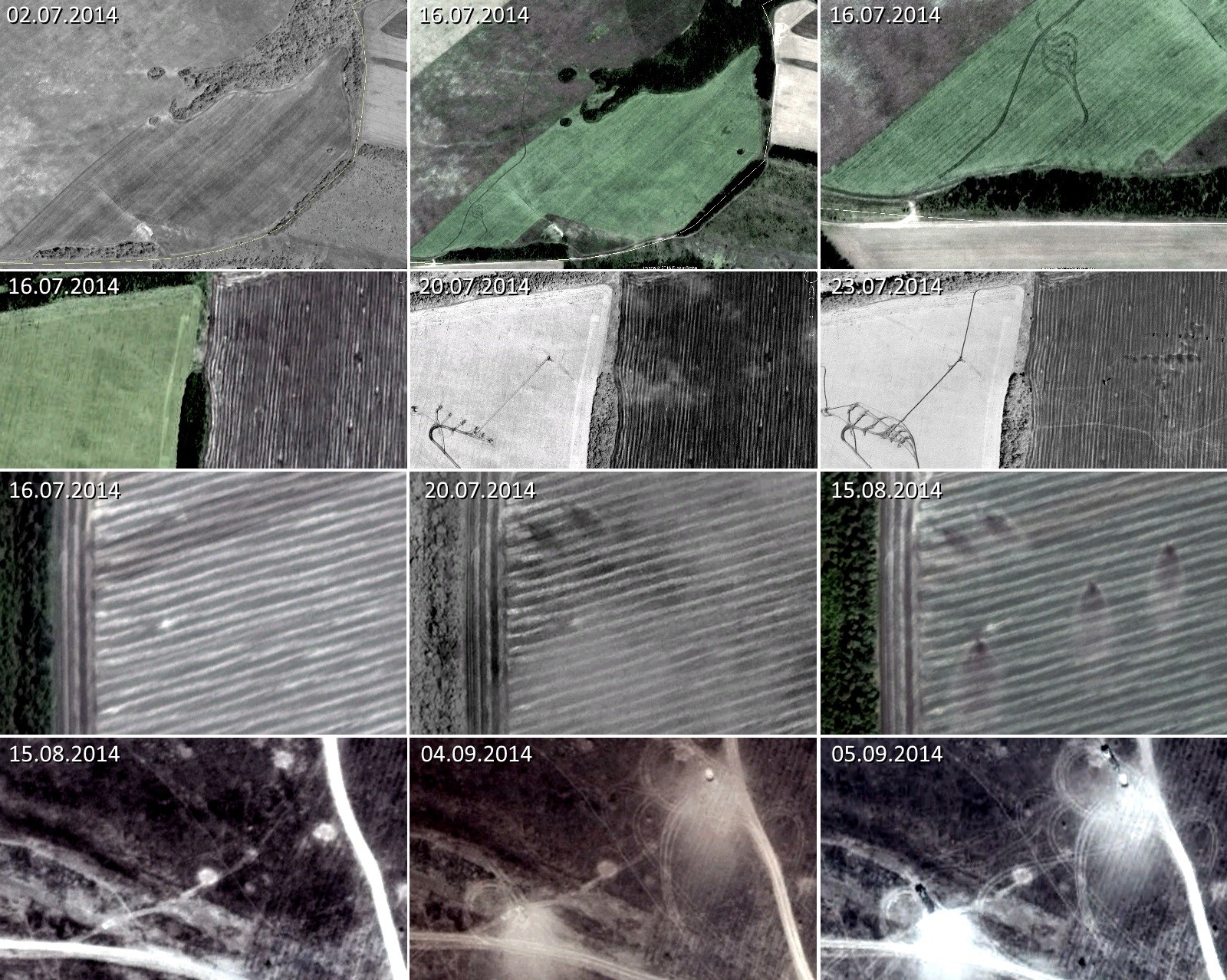 The second row shows an area with at least three likely firing positions. The 23.07.2014 satellite imagery was presented in summer 2014 by the NATO Supreme Headquarters Allied Powers Europe as evidence for Russian cross-border attacks. Already, on the 20.07.2014 imagery, six self-propelled howitzers are visible in firing position in this area. In the 23.07.2014 imagery, again six self-propelled howitzers are visible. However, also two crossing lines with marks indicating outgoing fire are visible just south of the howitzers.

The third row shows an area which was used twice as a firing position for MLRS attacks against Ukraine. The first attack, leaving two distinct blast marks, occurred between 16.07.2014 and 20.07.2014. The blast marks indicate outgoing fire in north-westerly direction. On 15.08.2014, three new blast marks are visible in the same area. The attack firing towards the north must have been occurred between 02.08.2014 and 15.08.2014.

The last row shows another location with blast marks indicating outgoing MLRS fire. No such marks are visible on 15.08.2014. In the 04.09.2014 satellite imagery, two large blast marks are clearly visible in the area. Additionally, the 05.09.2014 imagery shows two vehicles in position. Because of their length of approximately 12 m, it can be assessed that the visible vehicles are likely BM-30 Smerch MLRS launchers.

The left image showing the early situation (before the downing of MH17) reveals that only a limited number of firing positions could have been identified in the satellite imagery. However, there are already a number of artillery target sites inside Ukraine in proximity of the likely Ukrainian camp near the Marynivka-Kuybyshevo border crossing with trajectories pointing towards the Ukrainian-Russian border. This suggests that a number of cross-border artillery attacks occurred in this period.

Around two weeks later (by the end of 02 August), a larger number of additional likely firing positions, with and without signs of outgoing fire, are visible. Furthermore, it can be noted that the number of artillery target sites inside Ukraine has been considerably increased. Between the new firing positions and attacks sites a number of potential links could be established (discussed further in the full report).

The final map showing the situation at the end of the summer 2014 reveals that further attacks were launched from this area in August and September 2014. A number of new likely firing positions and attacks sites are visible in the satellite imagery. Compared with the situation in early August, a number of these new firing positions are located closer to the Russian-Ukrainian border, and also some of these attacks sites are much deeper inside Ukraine..

The preceding extract was just a small part of the full report, which you can download here.

The data underlying this report is provided freely under the license: Creative Commons 0 Public Domain Dedication 1.0.