As part of the case against the Ukrainian pilot Nadiya Savchenko, the Russian prosecution used the methods previously utilized by Bellingcat in proving that the Russian military, from its own territory, carried out artillery attacks against Ukrainian army positions. These methods were included in the expert testimony of Aleksandr Bobkov, the Head of Operative Monitoring of ScanEks, an “engineering-technological center” based in Moscow.

One of ScanEks’ primary tasks was to analyze the satellite imagery around the area of Metalist in Ukraine’s Luhansk Oblast between June 16-30, 2014 in order to draw various conclusions regarding the military activity in the area. Through this, the Russian prosecution sought evidence that the Ukrainian military, with the Aidar Battalion, shelled a checkpoint that resulted in the death of two Russian journalists. Savchenko, as the Russian prosecution argued, assisted the Aidar Battalion with this shelling, by acting as a spotter and relaying the coordinates of the Russian journalists. The prosecution sought the expert testimony of ScanEks in order to prove that this shelling that Savchenko supposedly assisted with was carried out by Ukrainian forces, not separatists.

Firstly, it should be established that the Russian prosecution’s arguments against Nadiya Savchenko are entirely without merit and part of a politicized show trial. While she admits to relaying information regarding different checkpoints to the Aidar Battalion, Savchenko was captured by militants of the Luhansk People’s Republic approximately an hour before the Russian journalists even arrived at the checkpoint that would later be attacked. For additional analysis regarding Savchenko’s innocence, see the research conducted by the Conflict Intelligence Team (CIT). The analysis carried out by ScanEks regarding shelling is valid—with a sufficient number of craters—in determining the trajectory of fire at attacked checkpoints, but has no value in determining the guilt of Savchenko.

In determining areas of military activity, the ScanEks analysts used satellite imagery from Digital Globe, among other satellite imaging services, to locate craters, damaged structures, and traces of fires. The prosecution’s expert analyzed the craters visible in satellite imagery in order to determine the trajectory of incoming artillery fire. The U.S. Army’s procedure for analyzing craters was used, in which either a low-angle fuze delay crater (which would include Grad artillery fire) or high-angle shell crater (mortar) is measured to determine the origin of the fire. 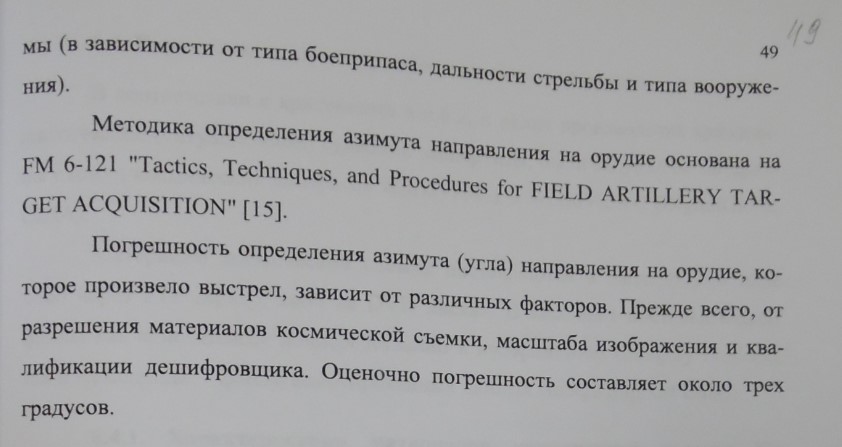 From page 49 of case file

In February 2015, Bellingcat used a method of overlaying the figures provided by the U.S. Army for determining crater trajectories over craters on satellite imagery. With a sufficiently large selection of craters, this method allows one to determine the direction in which artillery was fired, thus pointing an analyst to the firing position.

Bellingcat used this method to determine that between July 9 and September 15, 2014, the Russian military—not separatists—conducted large-scale artillery attacks against Ukrainian military positions. These attacks were staged in Russia with Grad artillery systems, with firing positions near established Russian military bases.

During the proceedings, the expert specifically cited Bellingcat’s methods in determining the trajectory of artillery fire.

“An expert in the Savchenko trial used the Bellingcat methodology in analyzing satellite images. CC @RuslanLeviev and @ReggaeMortis1”

The prosecution’s expert measured 260 craters their analysis, fewer than the 813 craters that Bellingcat measured in a field near the Dolzhanskaya-Capital mine.

From page 78 of case file

The analysis was conducted on a number of crater fields and checkpoints in the Luhansk Oblast. For example, in a crater field north of Tsvetny Pesky in imagery from June 19, 2014, the prosecution’s expert determined two directions of fire—one from the north-northwest, and another from the south-southwest: 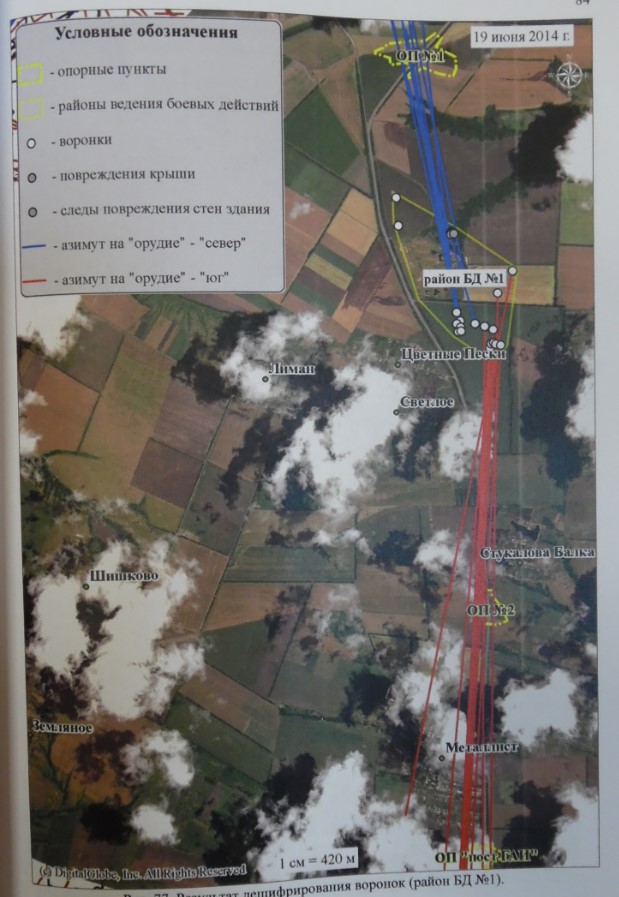 From page 84 of case file

In another crater field just outside of Stukalova Balka, dozens of craters trajectories were measured, pointing to the north: 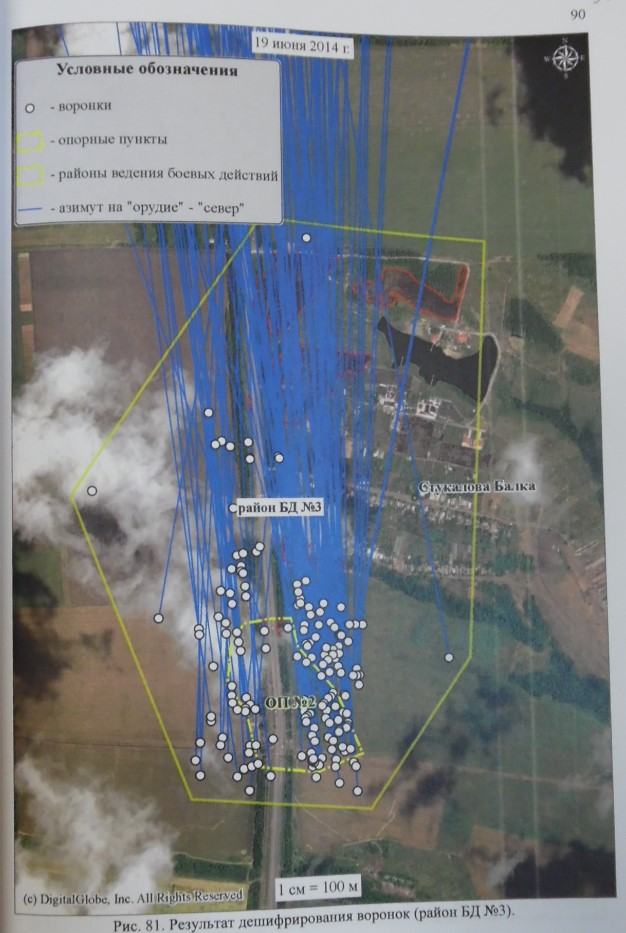 From page 90 of case file

Comparing the prosecution’s expert’s map to Bellingcat’s map of craters near Amvrosiivka, it is clear that the methodologies are quite similar: 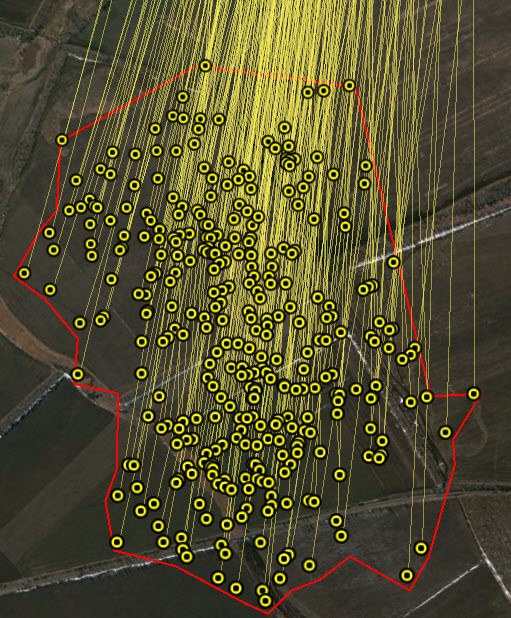 The prosecution’s expert testimony determined that, at some point between June 16 and 19, a shell landed in a field to the northeast of the killed Russian journalists. From crater analysis visible in a figure included in the case files (the blue line in the top-right corner), the shell came from the direction of a Ukrainian artillery position to the north. In a table detailing these craters, the prosecution’s expert gives the azimuth of incoming fire as 353 degrees, indicating a north-northwesterly direction.

Additionally, all four shell impact sites on the road—one of which may have killed the journalists—are within ten kilometers of this northern Ukrainian artillery position (bottom-right of figure). 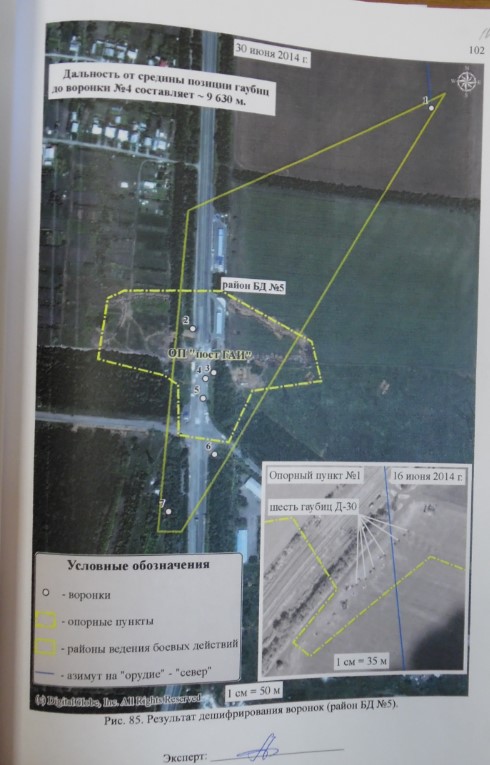 The prosecution’s expert also used a technique from Bellingcat’s analysis by examining the craters at the checkpoint after the attack, determining their location via geolocation and matching them with satellite imagery. In matching the landmarks (such as the road marks, billboards and a traffic police post) and the locations of the craters visible in the videos of the June 17 shelling and its aftermath, the expert is able to determine the craters visible in satellite imagery were indeed caused by the June 17 shelling. Bellingcat used the same analytical method from a Ruptly video of the aftermath of a Russian artillery attack on a Ukrainian military position. The spokesperson of Russia’s Investigative Committee, Vladimir Markin, has praised the analysis of Bobkov and ScanEks, saying that, “the testimony is fully corroborated (…) by the results of the examination with the use of satellite imagery.”

The prosecution’s expert correctly applied the methods of crater analysis that he described as from Bellingcat. However, all this proves is that the attack on the checkpoint that resulted in the deaths of two Russian journalists, along with other artillery attacks on nearby targets, was from the artillery fire of the Ukrainian military. The issue of Savchenko’s guilt is irrelevant to this analysis: she did not act as a spotter for the fatal attack against the Russian journalists, as proven by the prosecution’s own evidence and shadow analysis.