On February 25, the Dutch Safety Board (DSB) published responses to questions asked by the Dutch Parliament on February 4 and 10, along with its response to a letter written by Oleg Storchevoy, the Deputy Director of Russia’s Federal Air Transport Agency. Many of the questions posed by the Dutch Parliament concern the air traffic control primary radar data from Ukraine and Russia at the time of the tragedy. Along with information about the radar data and the investigative process, there were a handful of responses that provided clarification to questions regarding Russian claims regarding the MH17 case. Additionally, the DSB’s response to the Russian letter reiterated its stance on a number of Russian concerns regarding the investigation, most notably regarding the Buk missiles type and launch site.

The response of Tjibbe Joustra, the Chairman of the DSB, to the Russian letter is, to put it mildly, succinct. The response letter itself is two paragraphs and refers to an eleven-page appendix letter, along with a note that “none of the information provided can be regarded as new and significant evidence.” In other words, the DSB does not find the “new” evidence provided by Russia and its Federal Air Transport Agency sufficiently reliable or noteworthy to contradict the findings of its final report. In the letter’s appendix, the DSB responds every question from Storchevoy by referencing the DSB’s final report, and ending with the sentence “The Dutch Safety Board concludes that on the basis of the arguments put forward, there is no new and significant evidence.”

The DSB’s response to the Dutch Parliament is more revealing. Here are six takeaways from their responses:

1) As previously reported, the investigation has viewed “satellite data” of a missile launch provided by the United States. But no radar data.

Q: Did you ask for or receive satellite data concerning the firing of the missile? If yes, what kind of information does it concern?

Q: Can it be clarified which United States radar and satellite data has been received?

A: The Safety Board has not requested radar data from the US (see table 8 of the report “MH17 Crash”). With regard to satellite data, the Safety Board is bound to secrecy.

2) The DSB has “explicitly” ruled out the possibility of military aircraft (e.g. a Ukrainian Su-25) within 30km of MH17

Q: Are you familiar with the fact that in the news broadcasts of RTL and Nieuwsuur, TV Zvezda, Russia Today, Channel One (all three from the Russian Federation), Hromadske.tv (Ukraine), BBC Russia, and Paris Match, recognizable witnesses clearly state that they saw one or more military planes near MH17?

A: The Safety Board is aware of this. Based on multiple sources, it has been able to establish the cause of the crash of flight MH17 and has explicitly ruled out other possible causes, including the presence of military aircraft in the immediate vicinity of flight MH17.”

A: On page 279, the Safety Board concludes that no evidence has been found that there were other aircraft, civilian or military, in the direct vicinity of flight MH17. On page 136 of the report, it is noted that within 30km of flight MH17 no (military) aircraft were present at the time of the crash.

Q: During the presentation of the report, the chairman of the DSB said that the rocket came from separatist-held territory and that this is apparent from maps. Currently, there are no maps of the front lines in the report. Can the DSB indicate which areas in the potential launch area were controlled by the rebels?

A: Thereby, reference was made in figure 65 in the report, which practically coincides with the area controlled by separatists in July 2014.

The map that the DSB is referring to in its response can be seen below. As we know from various reports of fighting in mid-July, there were numerous pockets of Ukrainian control within the “area of armed conflict,” depicted as orange in the map below. It is unclear exactly where the DSB believes separatist control begins and ends near the launch location. 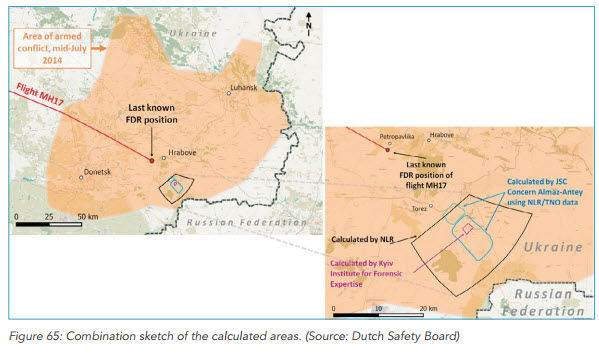 Q: Is there also penetration damage on pieces of wreckage (appendix X) that could have been caused by an on-board cannon?

A: In appendix X it is concluded that the damage that has been detected on pieces of wreckage does not match the damage that is caused by an on-board cannon when it comes to the number of hits, the density of the hits, the direction of the hits, and the type of damage. Concerning the type of damage, it is noted that the armor-piercing projectiles have a diameter of 23 to 30mm. The average size of the impacts is 11mm. An armor-piercing shell of 23 to 30mm cannot produce an impact of 11mm.

5) The DSB used both Google Earth and other satellite imagery, including classified materials

A: In the investigation, an overview photograph of the crash site originating from various satellite images was used. Initially, work was done with images from Google Earth. Later on, the DSB was able to see other (classified) satellite images, with which the images of Google Earth could be verified. The DSB is bound to secrecy when it concerns satellite data.

Q: Has it been ruled out that the received transcripts on the contact between the Ukrainian air traffic controller and flight MH17 have been manipulated with in any way?

A: Yes, the Safety Board has been able to rule that out. The Safety Board has the ‘cockpit voice recorder’ on which the conversations between the pilot of MH17 and the Ukrainian air traffic controller are recorded. In its research, the Board concludes that there are no indications of manipulation of the recorders. The Board also has copies of the tapes with conversation between the air traffic controller of Ukraine and flight MH17. The information on these tapes matches that of the ‘cockpit voice recorder.’