The hacker collective “Ukrainian Cyber Forces” released a trove of documents from servers of the Russian Interior Ministry in December 2014, revealing a document that disclosed details of a Russian military attack on Ukrainian border guards. Among the 36GB of files (1.7gb cache here), the vast majority are completely unrelated to Ukraine—bureaucratic paperwork, criminal cases, border inspections, and so on. However, buried underneath endless minutiae is Донесение Тарасовский 26.08.2014 2.doc.

This report was written to A.P. Larionov, an official of the Russian Interior Ministry in the Rostov oblast’ from I.I. Trofimenko, an official of the Russian Interior ministry of the Tarasovsky district. The report is a police account written on August 26 describing the circumstances of a battle that took place on August 25 between Russian soldiers and the Ukrainian National Guard. Four of these Russian soldiers were injured in the fight and were evacuated to a Rostov garrison hospital. The key section of the account is as follows (translation from original Russian):

On August 25, 2014 around 3:50pm, M.V. Polstyankin, O.Yu. Volgin, Yu.A. Alekseev, and A.A. Gerasimenko, serving in contracted Unit 51182 of the Millerovo locality, suffered injuries in the performance of official duties during a clash with the forces of the National Guard of Ukraine 10km north-west of the small village of Prognoi of the Tarasovsky region. At 6:52pm on August 25, 2014, the wounded were evacuated to the Rostov garrison hospital via a Mi-8 helicopter of the Russian armed forces. 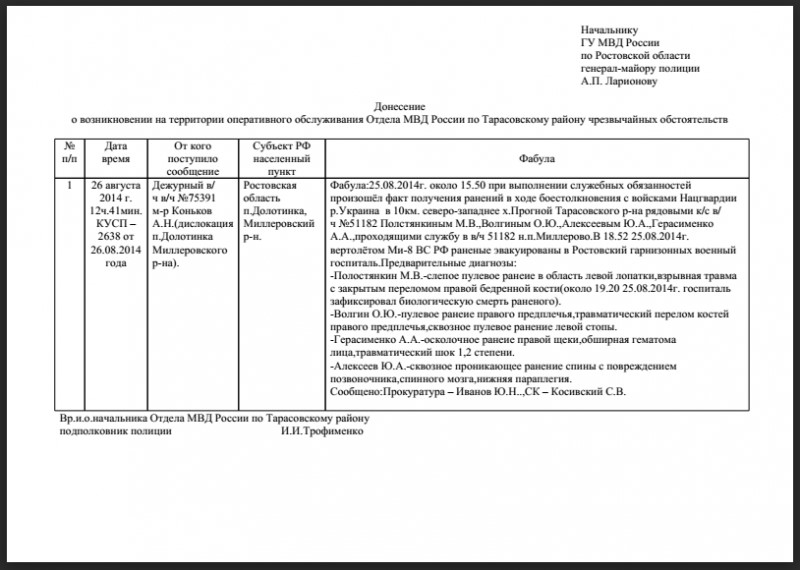 Using open source investigation, we can find various pieces of information that confirm that this leaked account did indeed occur. On August 26, the day after the events described in the above leaked document, the spokesperson of the Ukrainian National Security and Defense Council gave a briefing that details an attack on Ukrainian border guards. This attack took place in the area of Krasnaya Talovka, resulting in the death of four border guards and three injuries.

On August 25 in the area of “Krasnaya Talovka” of the Luhansk oblast, a sabotage and reconnaissance group which crossed the border from Russia was detected. At 3:00pm, a well-disguised border detail used automatic weapons to stop the advance of the saboteurs. Additional operational combat groups of border guards arrived at the battle as reinforcements. The fierce battle with Russian mercenaries lasted for two-and-a-half hours. The diversionary group was supported with fire from mortars, two APCs, and two IFVs from the Russian Federation. Additionally, Ukrainian border guards were fired upon by unguided rockets from two Mi-24 combat helicopters of the Russian armed forces. During the battle, four border guards died and three were wounded. Thanks to the actions of the heroes, a breakthrough across the border did not occur. The enemy suffered significant losses. The wounded and killed saboteurs were evacuated from the battlefield in Russia with an IFV under the cover of fire from APCs and helicopters.

There are numerous details in the two accounts that align, leading us to believe that the Ukrainian and Russian accounts are describe the same event. 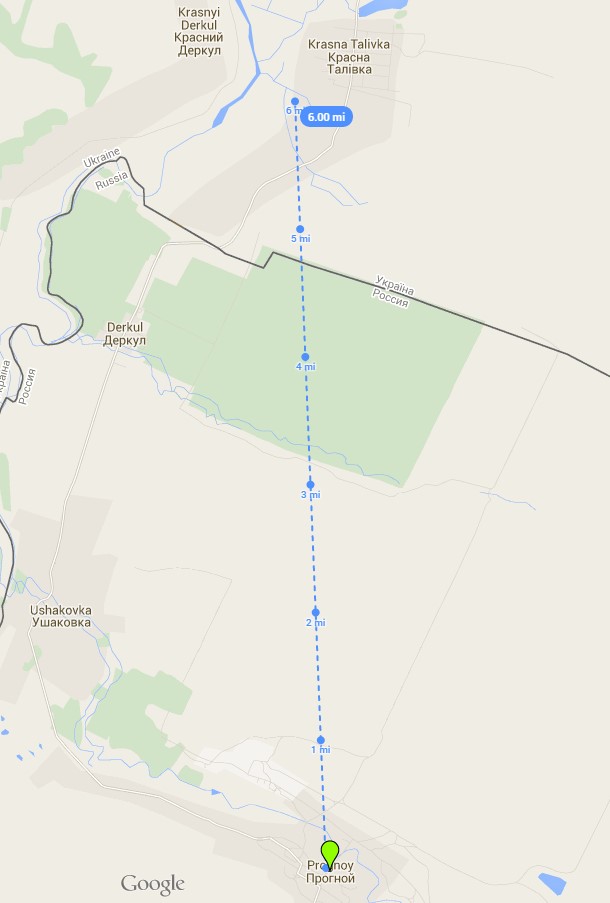 All of the press releases and leaked documents pale in comparison with the human stories of this fight, which are painfully real, despite any doubts that many cast on the veracity of the leaked documents. This human suffering exists for both Russian and Ukrainian families. As described in the leaked Russian document, the young Russian paratrooper Mikhail Polstyankin, who was serving in military unit 51182 in Millerovo, died in the fight with Ukrainian border guards.  The Gruz200 blog (not to be confused with similar efforts that share the name) presented four posts from social media, including Facebook and VK, documenting the death of Mikhail Polstyankin. Two people from his hometown posted regarding the death of the soldier on August 28, three days after the firefight on the border, and a third person posted a message [archived] celebrating the “Eternal memory of Misha Polstynkin—The young Russian warrior who was for the Russian language and Rus’!!!”

There are also remarkable stories within these leaked documents regarding Ukrainian soldiers, with one standing out. In one document, a report describes how a Ukrainian lieutenant named Eduard Masko was injured on July 16, 2014 while fighting separatist soldiers. As we find in an article on Faktu.ua, Lt. Masko was indeed wounded while fighting on July 16 (further bolstering the legitimacy of these leaked documents) after separatist forces attack a block post near Marinovka, Ukraine. Masko was badly burned and could not walk on either of his legs, as one was broken and the other burned. Eventually after being dragged to a nearby safe area, an ambulance took Masko to a hospital—in Russia. However, as we learn in an interview with the injured soldier, the doctors and nurses at this hospital saved his life by amputating his injured leg. Unfortunately, Masko’s comrade who was also injured in the attack died in this hospital—the Russian doctors and nurses cried after he died. Soon after, Masko returned to Kyiv to receive additional treatment. He is now alive and well—perhaps even better than before. His newborn son Kostya was born shortly after he received near deadly injuries, and Masko was able to travel to America to receive superior treatment for his burns.

While leaked documents cannot always be trusted at face value, they can also be valuable in providing extra validation of some events. Leaked documents or not, there was a border clash on August 25, and Eduard Masko was hurt on July 16 and treated in a Rostov hospital. However, by following the leads provided in these leaked documents, the narratives can gain many dimensions with open source information, including both the tragedy of Russian soldier’s death after attacking a Ukrainian checkpoint and the joy in the kindness of ordinary Russians in saving a Ukrainian soldier’s life.

See this post from the Global Voices Online special project “RuNet Echo” for this story in its original form, along with a profile of the hacker collective who leaked the documents.