With the start of the Minsk ceasefire less than 48 hours away, a column of 38 BTR-80 armored personnel carriers (APC) was observed traveling north along the M18/E105 highway in Crimea on February 13, 2015. Their destination, as far as the videos show, is to Dzhankoi, a city lying just a 40km drive from the Ukrainian border. Russian military exercises for the Black Sea Fleet were ongoing at the time of the convoy, ending on February 14. This column of BTR-80 vehicles, many of which are marked with specific identifying numbers and markers, was first observed in two separate videos traveling north along the M18/E105 highway between Krasna Zor’ka and Novoandriivka, then later about 70 kilometers north on a major street in the city of Dzhankoi. In all three videos, the column of BTR-80 vehicles are headed north towards Dzhankoi. It is unclear if these 38 vehicles were involved in the military exercises, but one Crimean news source believes so.

A three videos that emerged on February 13 show the north-bound convoy appeared on February 13, 2015. The first video shows a driver headed north along the M18/E105 highway, passing a long column of BTR vehicles before reaching a point in which the separate lanes of the highway merge. In the image below, two key points–the merging of the separate lanes into one and a distinct tower to the right of the driver–are both present at 45.190737, 34.078051:

A separate video showing the same scene was also posted today, in which a driver traveling south (the opposite direction of the video above) captures the same scene. The same tower is visible, along with a truck that is visible at the very end of the first video: 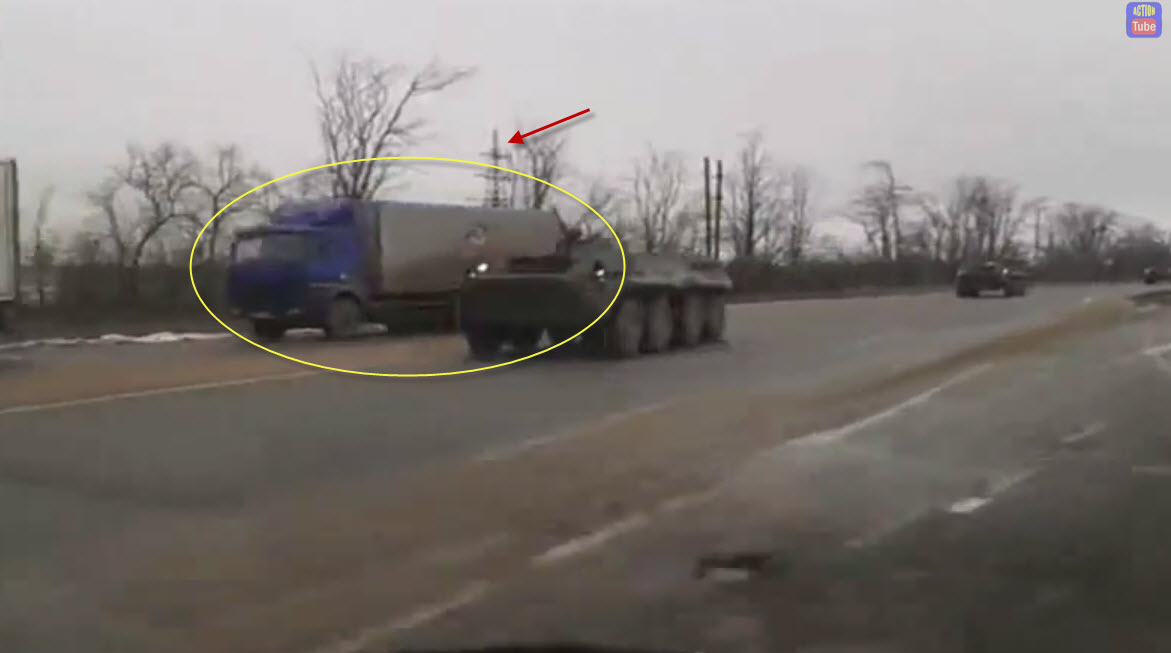 In the Dzhankoi video, the perspective is from a large apartment building looking down on a street in Dzhankoi, showing a large convoy of BTR-80 vehicles. Highway M18/E105 turns into Radyans’ka Street, which is where the BTR column is located on the video. The video is shot from an apartment building located at 45.700278, 34.401819, which can be clearly identified when comparing a scene from the video with a photo on Panoramio showing the gas station to the south of the apartment building: 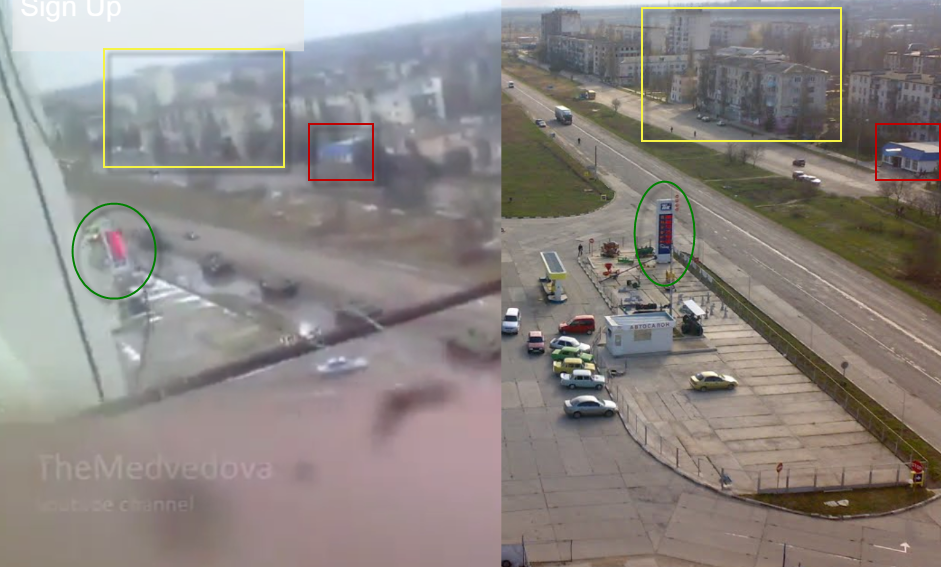 When taking these three videos into account, we can see the route taken by the convoy. At 0:45 seconds in the first highway video, we see the kilometer marker “632,” and at the end of the video where the lanes merge, the number “628” appears. We can thus assume that the video shows 4-5km of highway, giving us a better starting point for the route. The origin point of the convoy was likely Simferopol, or the convoy moved through the city before heading north on M18/E105. 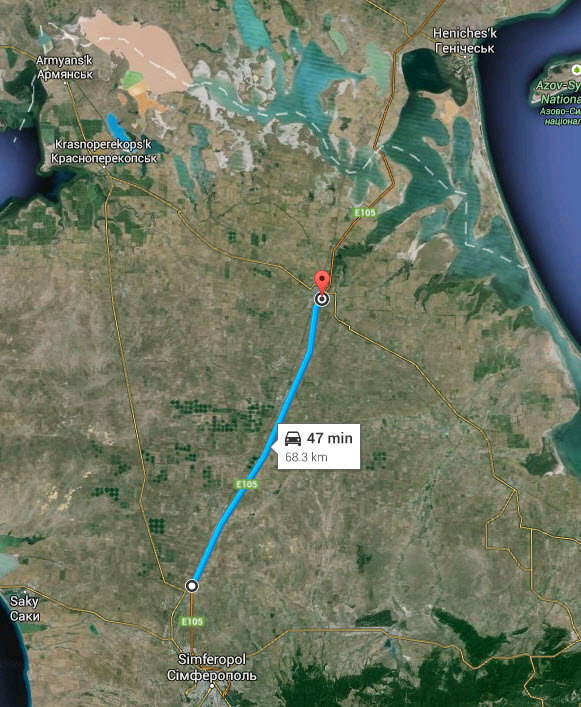 The movement of military hardware through Russian-annexed Crimea is not necessarily indicative of aggression or conspiratorial machinations. The timing of the military exercises may be curious, as some have called it “saber-rattling,” but Russia has long emphasized the importance of the readiness of its forces in Crimea and these exercises are not out of out of the ordinary over the past year. However,  saber-rattling or not, the Bellingcat Vehicle Tracking Project enables us to track these individual BTR-80 units in the future with any additional sightings in Crimea or, if the upcoming ceasefire does not hold and the situation seriously deteriorates, eastern Ukraine.

Update: Information added in the first and final paragraphs regarding the Black Sea military exercises. 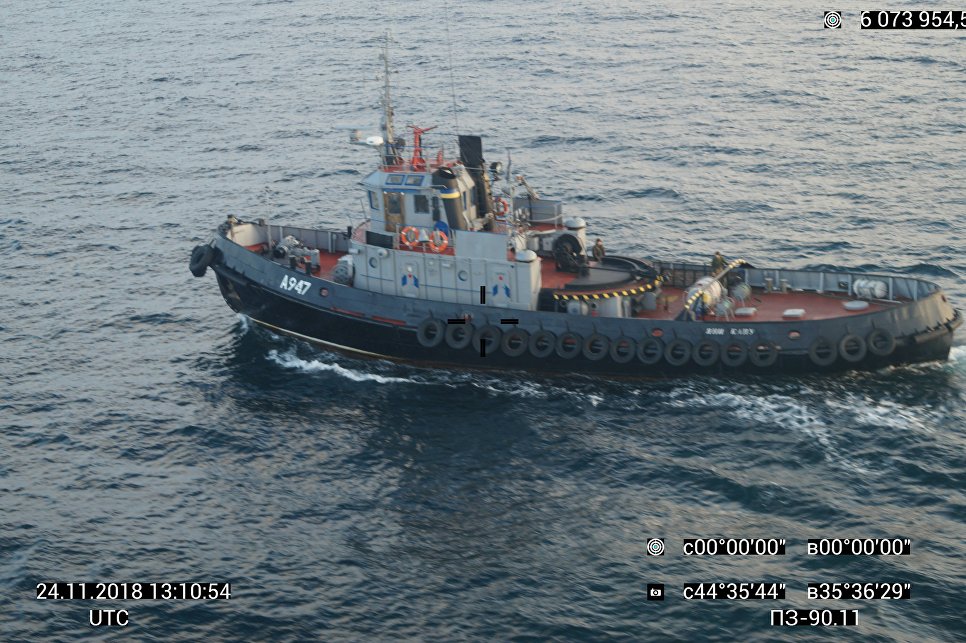