At approximately 2:25pm (Kyiv time), a passenger bus near a Ukraine government-controlled checkpoint to the northeast of Volnovakha, Ukraine was attacked, leaving  12 dead and 13 wounded. Soon after, the Ukrainian government and pro-Russian separatist forces blamed each other for this attack: Ukraine accused separatists of firing a Grad rocket from a nearby village towards the checkpoint, accidentally hitting the bus, while separatists levied three different scenarios against the Ukrainian military and nearby forces. This report will examine the initial claims from each side and consider how these claims morphed—or stayed the same—in the days after the attack.

Claims within the first two hours

At 4:09pm (Kyiv time), the “Novorossiya First operative” VKontakte (VK) account posted a message that detailed an attack on a checkpoint near Volnovakha. This account has over 7,000 followers and has made over 4,400 posts, most of which detail attacks launched by separatist forces against Ukraine. The account edited the post soon after it became apparent that a passenger bus was attacked at the site detailed in the declaration of a separatist attack. The edited post can still be seen:

The tweet separatists sent on #Volnovakha about “Ukrop’s roadblock being destroyed” – screenshot via @euromaidan pic.twitter.com/51YeD0eBfa

“Ukrop (derogatory term for Ukrainian) checkpoint at the exit from Volnovakha to Donetsk has been destroyed, with information received at 3:53pm Kyiv time (4:53pm Moscow time).”

A pro-separatist Twitter user, who often reposts dispatches from separatist groups of ongoing battles, sent out a tweet at 4:17pm (Kyiv time) (eight minutes after the Novorossiya First operative post) with the exact text in the above screenshot. In case the tweet is deleted, an archived copy can be viewed here.

The Ukrainian Interior Ministry immediately accused pro-Russian separatists of conducting an artillery strike from a Grad launcher at the checkpoint outside of Volnovakha, and striking the passenger bus that was traveling from Zlatoustovka to Donetsk. In a Facebook post at 3:06pm (Kyiv time), less than an hour after the attack, a Ukrainian Interior Ministry official of the Donetsk region, Vyacheslav Abroskin, said that:

Thirty minutes ago from the direction of Dokuchayevsk, an artillery strike was carried out by militants on the Ukrainian law enforcement checkpoint in the area of Volnovakha. A direct strike on a passenger bus. As of now, ten people are dead and thirteen are wounded.

The village Dokuchayevsk is located approximately 19km (12mi) northeast of Volnovakha and 30km (19mi) south of Donetsk. This post was later edited to include additional details and a photograph, but the Facebook edit history clearly shows that this vital piece of information—that the strike was conducted from a town to the north-northeast of Volnovakha—was initially included less than an hour after the artillery strike (times in EST). 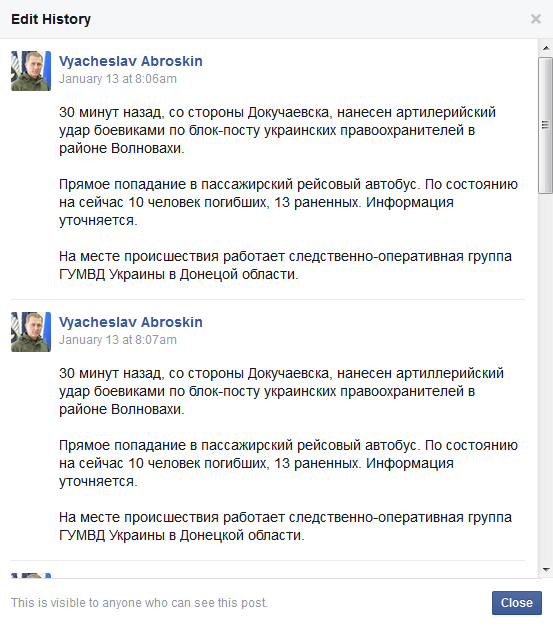 This claim did not change throughout January 13, the day of the bus attack.

An expert of the Ministry of Defense has studied with photograph with detail of the attacked bus and has unequivocally concluded that, judging by the holes, an automatic weapon or machine gun was used to fire at this vehicle at a distance within 50 meters.

If we had fired from Grads, as the Ukrainian side claims, then you would not recognize the bus. Shelling from Grads has an entirely different nature of consequences. And the wounded in the bus would not have remained after the shelling of Grads.

Donetsk People’s Republic politician and former chairman Denis Pushilin gave a different account on the day of the attack that did not include automatic weapon fire, instead blaming a rogue Ukrainian battalion:

The Ukrainian battalion ‘Sich’ has been conducting shelling Donetsk from the direction of the village ‘Peski,’ whose leadership has openly declared that the battalion does not obey the official orders of Kyiv. And they actually provide our militia to respond.

Pushilin went as far as to accuse Ukraine of conducting a false flag attack to pin blame on separatist forces:

I don’t rule out the possibility that [the attack] could be the Ukrainian army’s provocation, to attempt to put the blame for what has happened on local militia.

Two days after the attack (January 15), the “operational-investigative group” of the DNR, which include “representatives of the police, prosecutors, and experts from the DNR Ministry of Defense,” introduced a new scenario for the Volnovakha bus attack. A document received by the Donetsk News Agency (DAN) describes how a MON-50 anti-personnel mine was responsible for the deaths on the bus:

The nature of the damage in the body of the bus based on the scattering of fragments, the height of their entry, and the diameter of the holes concludes that the striking [of the bus] came from a staff engineered explosive (directional) of the MON type, in service with the combined arms units of the armed forces of Ukraine.

Additionally, the report declares that along with a MON-50 explosion,  “with a high probability, the bus came under fire from small arms using the 7.62mm caliber (AKM). This report from the DNR refutes that the bus was hit by a Grad rocket, explaining that (selected among a longer list):

The report concludes that:

The destruction of the bus was carried out straightforwardly at the checkpoint by Ukrainian troops with a directional landmine and staff small fire arms of the 7.62mm caliber. The most likely cause of the deliberate landmine blasts and the subsequent firing at the bus by Ukrainian servicemen could be due to incorrect actions of the driver (not stopping the bus for inspection) being regarded as an attempt to break through the checkpoint.

On January 14, the OSCE (Organization for Security and Co-operation in Europe) released its initial “spot report” of the scene of the Volnovakha bus attack. Their findings corroborated Ukraine’s initial claim and contradicted all of the DNR’s claims except for the possibility of a “rogue” Ukrainian artillery battalion

The bus had shrapnel damage consistent with a nearby rocket impact, estimated by the SMM to be 12-15 meters from the side of the bus.

On January 17, the OSCE released its findings from conducting crater trajectory analysis, which determines the origin direction of the rockets that were fired towards the Volnovakha checkpoint. This claim further bolstered Ukraine’s initial claims and contradicted all of the DNR’s claims, barring the possibility of a “rogue” Ukrainian artillery battalion operating from separatist-controlled territory in the north-northeast:

The SMM conducted a comprehensive inspection, focusing on five craters caused by explosions that had occurred during the incident. The investigation included comprehensive crater analysis of two specific blast craters, including the crater located 10 metres from the side of the passenger bus. In the SMM’s assessment all craters examined were caused by rockets fired from a north-north-eastern direction.

Andrei Kelin, Russia’s representative to the OSCE, released a statement that claiming that the findings of the OSCE contradict Ukraine’s claim:

The [OSCE] observers established that the firing came from a Grad, but from the north. This refutes the previously hypothesis that was sounded by Kyiv and taken up in Washington, that the militia fired from the east.

It is worrying that the Russian representative to an organization that takes a guiding role in monitoring the movement—which heavily relies on the cardinal directions of north, east, west, and south—of soldiers is unable to tell the difference between “north,” “north-northeast,” and “east.” For reference, below is a map marking the site of the attack (blue bus) and the general area of the suspected firing site (red warning sign), along with a compass showing north, north-northeast, northeast, and so on. 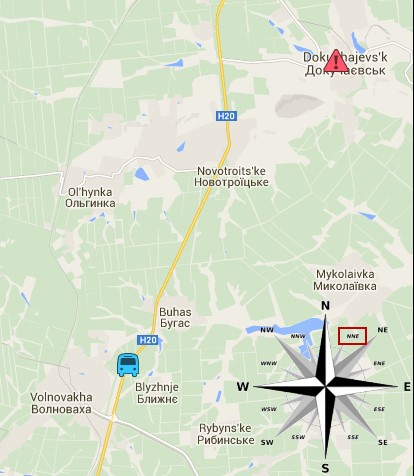 Since the morning of January 13, Ukraine has pushed a single narrative: a Grad rocket strike conducted by pro-Russian separatists from town of Dokuchayevsk caused the tragedy outside of Volnovakha. The Donetsk People’s Republic has maintained three narratives, sometimes combining them beyond the point of comprehension (a mine explosion, followed by a Ukrainian soldier firing an AK-47 into the bus, followed by a false flag artillery strike). Russia has not formally offered a scenario, but state-controlled media has clearly come out against the Ukrainian narrative, evidenced by their interview of a fake victim on Vesti on January 14 that supported the mine theory. The closest thing to an official Kremlin narrative has come from the Russian OSCE representative, Andrei Kelin, which left much to be desired in confirming the details of the attack. The Russian OSCE representative’s assertion that Ukraine claimed that the strike came from the east originates either from astonishing incompetence or willful deceit.