Is this Ukrainian Buk a Clue in the MH17 Investigation or a Red Herring?

On July 19, two days after the tragic shoot down of Malaysian Airlines flight 17, the Security Service of Ukraine (SBU) publishedan image in a press release that showed two Buk-M1 anti-aircraft systems. One of them was the Buk-M1 that likely shot down MH17, transported on a truck eastward through Luhansk on July 18. The other was a Buk numbered 312 operated by the Ukrainian military that was videotaped on March 19 at the Yasinovatsky post just north of Donetsk, Ukraine. While the SBU did not explicitly claim that these two Buks were one in the same, it is very easy to assume this from the juxtaposition of the two images, and much proverbial ink has been spilled establishing the significance of Ukrainian Buk 312. 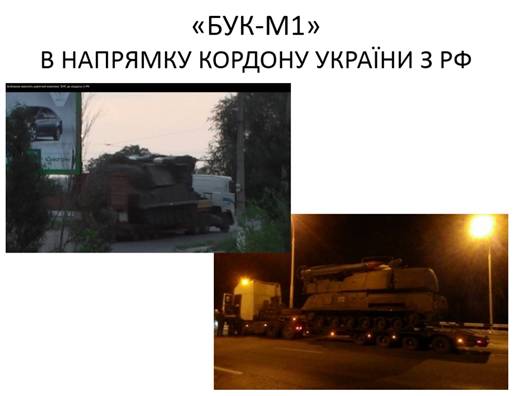 Recently, photographs of Ukrainian Buk 312 uploaded on the Russian social media site VKontakte (VK) on August 17, 2014  have surfaced, allowing us to finally settle the significance—or insignificance—of this anti-aircraft system.

A number of Russian social media users and bloggers have recently shared their findings of Buk 312 and established that it was at the Kramatorsk airfield in August 2014. This reaction from the Runet has been intensified due to a recent interview between Ukrainian journalist Anatolii Sharii and a Ukrainian soldier attesting that Ukrainian Buk 312 was redeployed from Luhansk to Kramatorsk. You can read a previous Bellingcat article on the (in)significance of the new information from this interview here.

Two images of Buk 312 were first posted on the VK page of Ukrainian soldier Igor Polulakh. The original images have been deleted, but you can find archived images here, here, and, thanks to Ukraine@War, here. 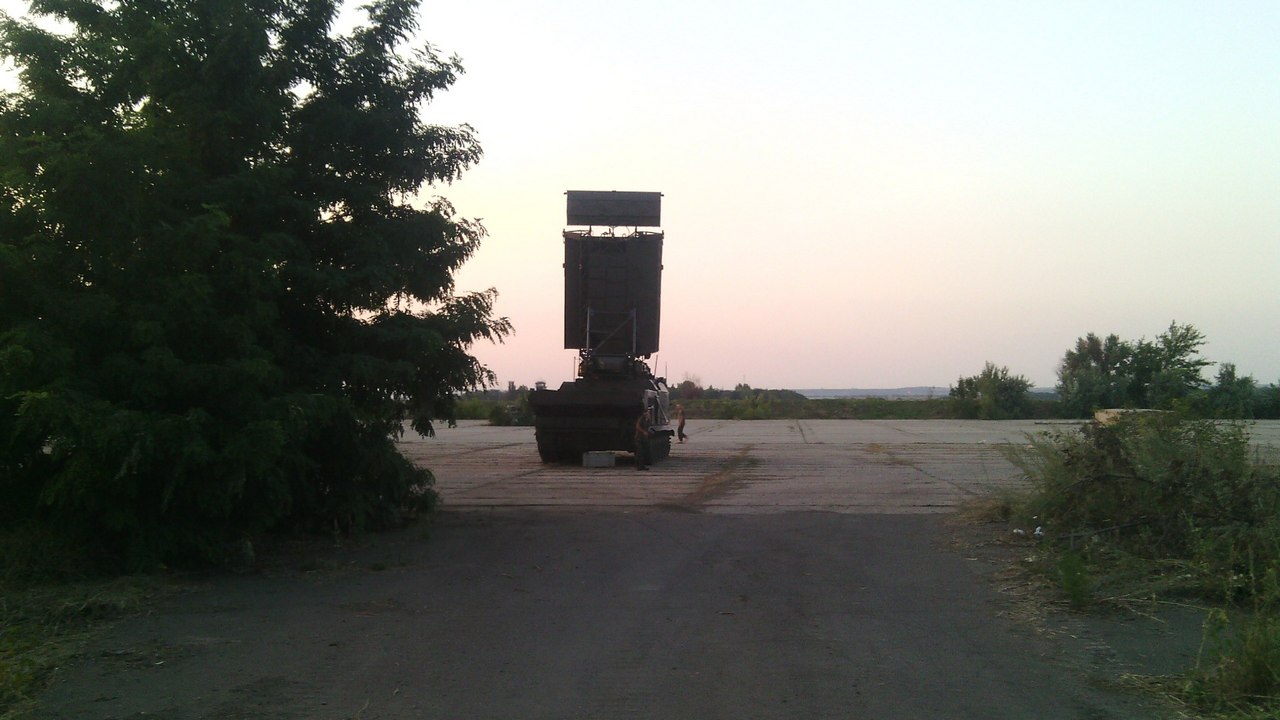 The blogger “militarizm” geolocated the image of Buk 312 to government-controlled Kramatorsk airfield, particularly to the coordinates of 48.7045442, 37.6280022. This geolocation is likely correct. The Google Map imagery from August 23 shows a number of helicopters and two heavy military vehicles around these coordinates. While the helicopters in the Google imagery are not present in the images, many other features are, including the similarly colored path (red lines), lines separating the concrete tiles (purple and blue lines), two particular structures (yellow/green circles), two trees (black 1 and 2), and a tree to the left of the camera (orange arrow): 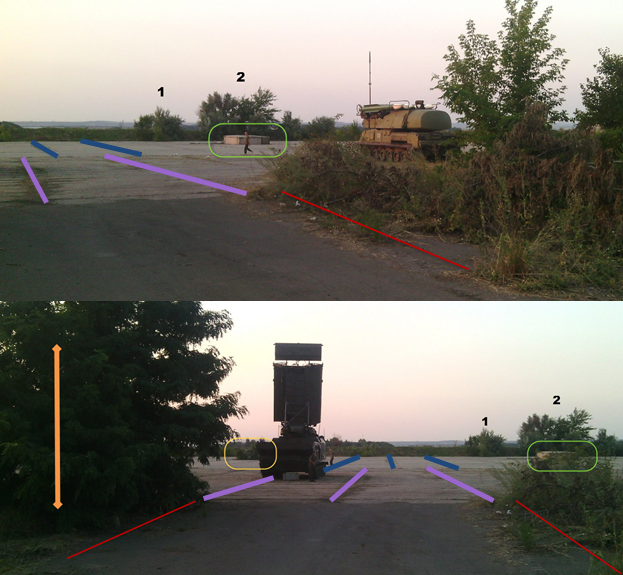 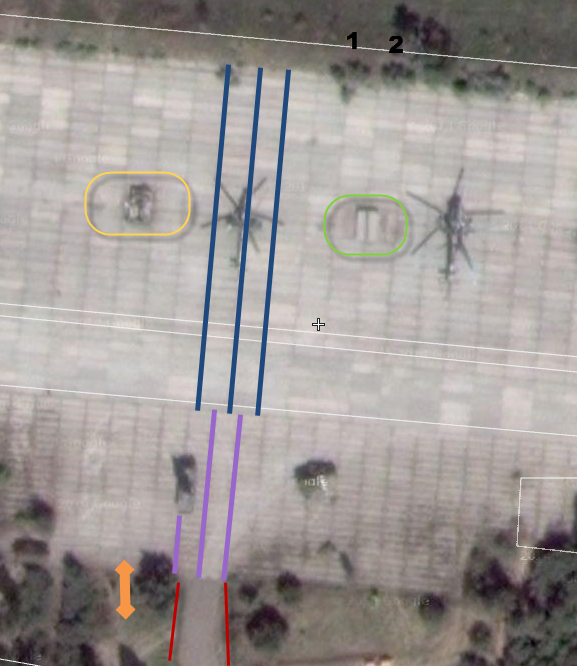 As noted by the blogger Ukraine@War, what appears to be a Buk with four white-tipped missiles is located at roughly the same site as the Buk in the VK images. It is impossible to tell if the particular vehicle in the satellite imagery is the same as Buk 312, but considering the position of the vehicle and the four white tips, it is likely a Buk of some kind, if not 312 itself.

Polulakh posted these two images on August 17, 2014 along with a batch of other photographs from various other locations. Therefore, it is difficult to be certain when these photographs were taken without additional metadata or indicators of time. However, the Kramatorsk airfield was under heavy attack throughout the spring of 2014 (especially in April and May) and Polulakh posted a previous batch of images on June 27, 2014, making it most likely that the photo was taken in July or August. Additionally, a series of historical imagery of the Kramatorsk airbase shows us the difference between the base on July 12 (above) and August 23 (below), indicating rapid mobilization at the site. From this, it is extremely likely that the photographs were indeed taken in late July or early/mid August.

Some have claimed that pro-Russian separatists seized this particular Buk in June in Donetsk, following a report from the Zvezda channel on June 29 and a comment from a Ukrainian official that a “non-operating” Buk was left behind.  Others, including the “militarizm” blog referenced at the beginning of this report, have accused Ukraine of using its Buk 312 of downing MH17.

The latter scenario—laying the blame on Ukraine—is extremely unlikely to be true for a number of reasons that are immediately evident: the 35km range of the Buk while Kramatorsk is located over 80km from the crash site, the angle at which MH17 was struck by fragments of an anti-aircraft missile indicates that the missile came from the southeast, and the improbable logistics of transporting a government-controlled anti-aircraft system through the heart of separatist territory, firing it, then extracting it without even a whisper on social media.

The former scenario—separatists seized Ukrainian Buk 312 and used it to down MH17—can now be considered extremely unlikely. As documented in Bellingcat’s earlier report “Origin of the Separatist Buk,” the “side-skirt damage fingerprint” of Ukrainian Buk 312 has little resemblance to that of the Buk being transported out of Donetsk on the morning of July 17. Additionally, with firm confirmation that Ukrainian Buk 312 was photographed in late July/August 2014 in a government-controlled airfield, we can safely say that pro-Russian separatists never seized, let alone used, this particular anti-aircraft system.

Considering the confirmation of the presence of Ukrainian Buk 312 in government-controlled Kramatorsk in the summer of 2014 and the lack of evidence that this particular Buk was anywhere near Snizhne on July 17, we can safely say that 312 had nothing to do with the downing of MH17 and a different Buk was used.