Andrew Haggard is the founder of the Korean Defense website. He's fascinated by all-things military and defense-related with a particular interest in South Asia and the Korean peninsula.

Previously unknown videos have confirmed that a convoy of Russian military hardware had been in Sudzha, Russia in the days around July 11, 2014.  More interestingly, the combination of videos suggests that Russian troops painted over at least one of the Buk M2 TELAR’s identifying marks.

It was claimed that this video was taken in Sudzha on July 11th. For further confirmation of the geolocation of the video to Sudzha, we can analyze the decorative elements of the train station more closely.  In the middle and the right-hand screenshots above, there appear to be two architectural elements higher than the train in the video.  Comparing these features lines up nicely with a photograph of the Sudzha train station.  At another moment in the video, we can also see one of the two higher elements and a smaller, triangular-shaped feature protruding above a train (see image below, on the left).  These also line up with the photograph of the train station. Assuming the date is correct, the video is evidence that a convoy of Russian military hardware, including M2 Buks were in Sudzha around July 11th.  Between the 1:03-minute mark and 1:20-minute mark of the video, there are a number of Buk systems on display, including the Buk M2 shown in the screenshot below. 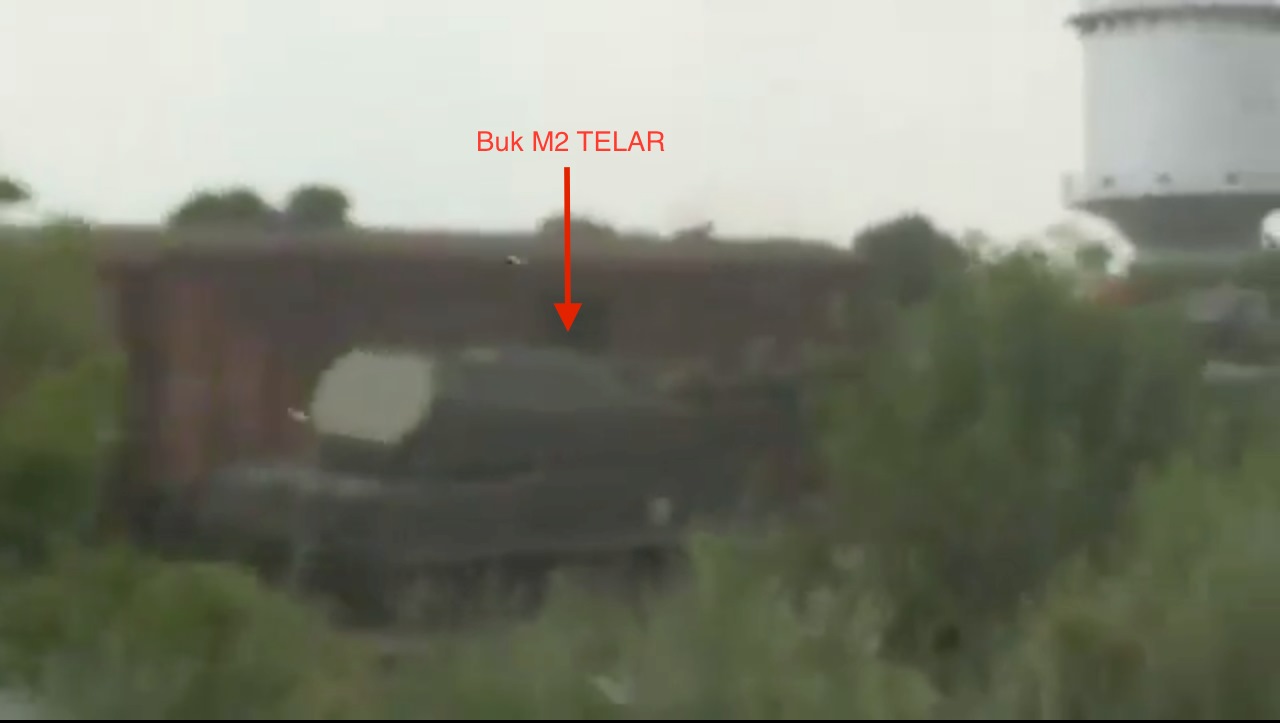 Initially, the original source of the above-mention video could not be found.  Additional research, however, now suggests the original source may have been from Instagram, where the video was uploaded in two parts.  Instagram dates the videos as having been uploaded to its service on July 11th and both parts were geo-tagged at Станция Суджа, which translates as “Sudzha Station.”

Additional video evidence from Sudzha has also surfaced from around July 11th.  In one video, we see local students congregating at the train station to watch the convoy and Russian troops.  This video provides confirmation that the Russian military had been painting over the identifying numbers of Russian Buks.

In the following screenshot, we see a group of youths walking down the platform behind the train station.  The video isn’t steady and appears to be captured on a cell phone.  As the camera operator walks, the camera swings and captures this scene of six Russian soldiers next to a Buk M2 TELAR with what seems to be a fresh coat of paint where the Buk’s identifying numbers would typically be found.  Without speaking to the soldiers sitting around the Buk, we cannot be sure why the numbers were painted over. 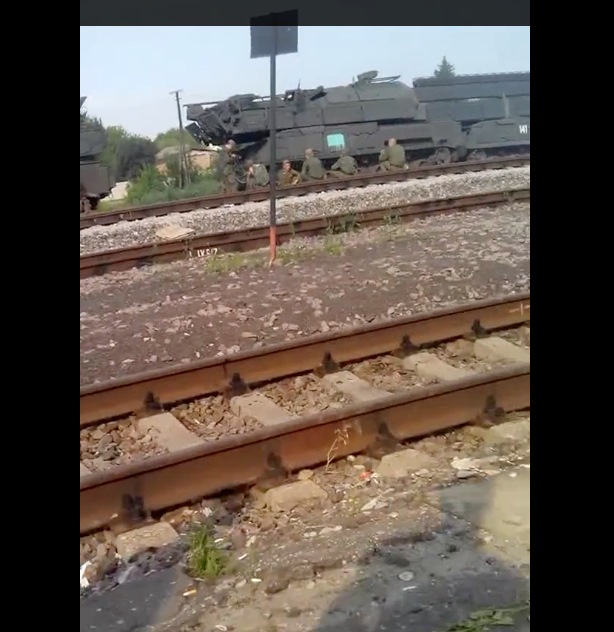 Additional images posted onto Instagram reveal clearer perspectives of Buk M2 systems in Sudzha and indicate the spot where the Buk TELAR’s identifying numbers would typically be located were painted over. In the following photograph, we see the TELAR of a Buk M2 system with what appears to be tape squaring off the area in which the identifying numbers would normally be located, as if to prevent paint from spreading beyond the square area. 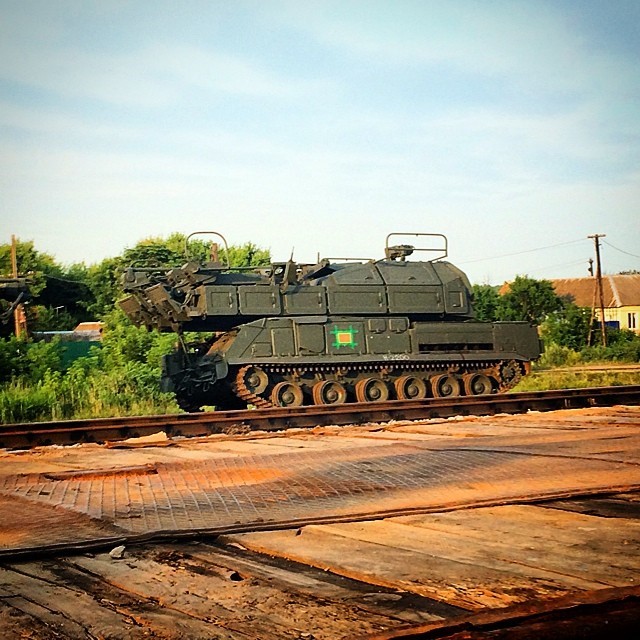 Another photograph uploaded by the same account shows a Buk M2 TELAR and a TEL.  While the paint job is obvious on the TELAR, the TEL (below, left) may have also have been painted.  There seems to be a discoloration over the area where the numbers would typically be found.  It should be noted that both the TEL and TELAR systems in the photograph below are the same systems that appear in the fourth and fifth photographs/screen captures. 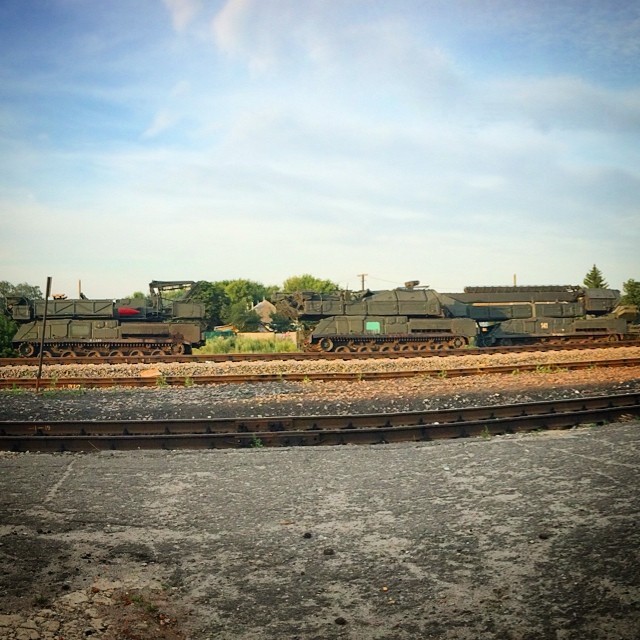 We can confirm that some Buk M2 systems had had their identifying marks painted over inside Russian borders.  What cannot be conclusively determined is the reason why the identifying numbers were painted over and effectively removed, but the painting over Russian military hardware’s identifying numbers jives with reports of Russian military convoys entering Ukrainian territory with its identifying marks concealed.  Absent other information and details, it should be noted that this does not mean that the Buk systems pictured in this analysis entered Ukrainian territory.  It’s important to also highlight the fact that the Buk TELAR spotted in rebel-held areas on July 17th was the M1 variation and there is no solid evidence that a Buk M2 system had crossed the border into Ukraine.

Two photos uploaded by another Instagram user on the 10th of July 2014 suggest that the Russian military presence in Sudzha lasted at least a couple of days.