A mysterious incident occurred off the coast of Syria late June of this year. Local news reported that a sabotage action took place on underwater oil pipelines at the Baniyas oil terminal. Scarce information was available on what exactly happened and the resulting impact, yet the likely use of magnetic limpet mines and scuba divers indicate a state or state-sponsored sabotage operation. Footage of the exploded pipelines were disseminated on social media, while an item on Syrian television showed how the crude oil polluted the shores and local environment. In the meantime, the crisis with oil tankers in the Persian Gulf was already brewing, with alleged attacks on various oil tankers with limpet mines, and subsequent capture of the GRACE 1 Iranian tanker at Gibraltar by the United Kingdom, heading for Baniyas refinery with 2.1 million barrels of light crude oil. This incident would have also consequences for Syria, as the Baniyas oil refinery appears to be a crucial lifeline for the Syrian economy. In this article, we make a quick analysis using open-source information and satellite imagery from Planet Labs and Sentinel 2 satellites to show the marine pollution from the spill, subsequent tanker visits, and discuss potential wider environmental impact that could be unfolding as a result of the apparently sabotaged pipelines.

Syria’s oil and gas has always been a major source of income and import for domestic use. Prior to the ongoing civil war, the annual crude oil production in 2011 was roughly 400,000 barrels per day, according to the US Energy Information Administration, while also producing naphfta, jet kerosene, diesel, and fuel oil. The oil production took place in the fields of Deir ez Zor, Hasakah, with most of the gas being extracted from the fields of Hama. A network of pipelines and pumping stations ran across the country to transport this to the refineries in Homs and Baniyas.

Early on in the conflict, these pipelines were often targeted by armed groups to impact the regime’s oil production, for example in Homs in February 2012, where an oil pipeline near the refinery was hit, resulting in large fire and a cloud of smoke west of the city. These attacks continued throughout the conflict, where the Syrian regime, armed groups, the US-led Coalition, and the Russian Air Force bombed oil infrastructures. 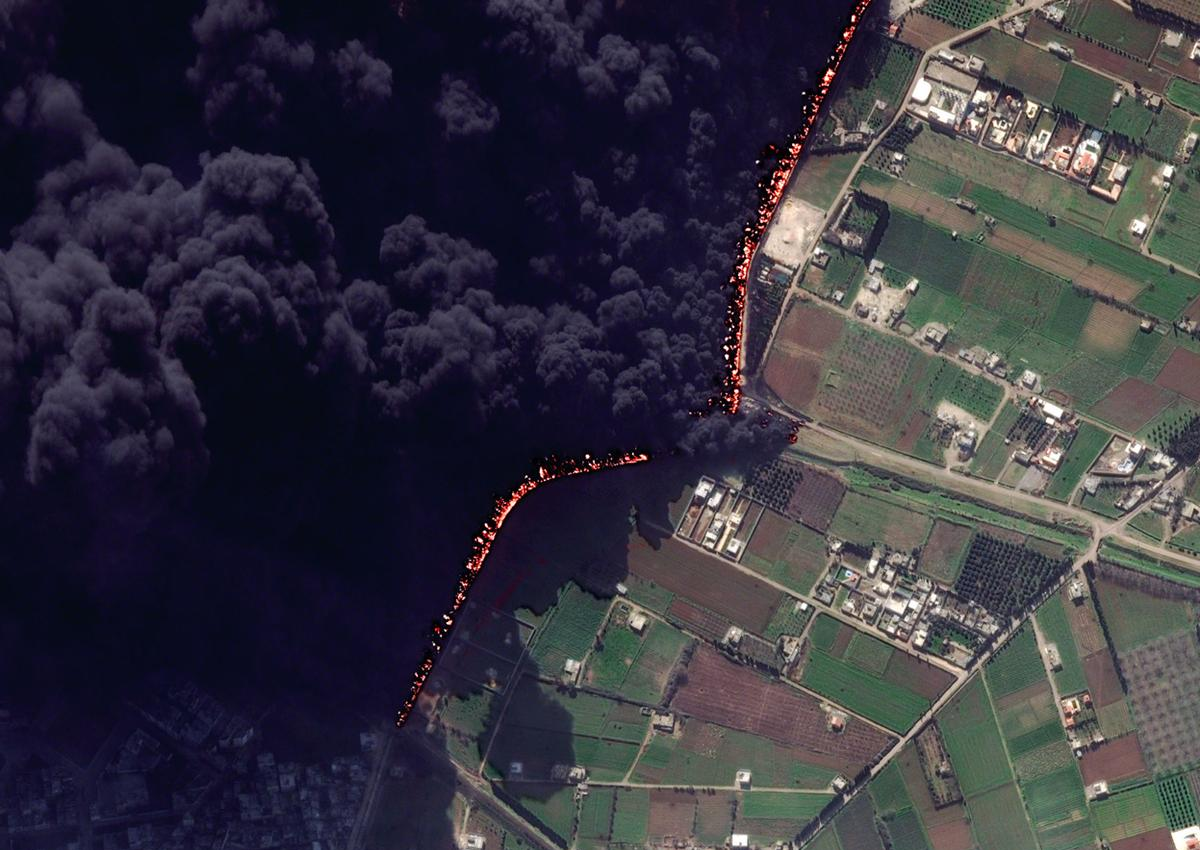 Thick black clouds of burning oil are visible after an oil pipeline was hit at Homs, February 2012. Maxar

The conflict significantly impacted oil production, dropping to 10,000 barrels per day (BPD) in 2015, and currently estimated to be 18,000 BPD in regime-controlled areas. There are various substantiated links that the regime is still importing oil and gas from the areas controlled by the Syrian Democratic Forces (SDF) that currently control most of the larger oil fields east of the Euphrates River. Nonetheless, the regime’s dependence on imports grew, and Iran plays a lifeline role in providing the regime with crude oil and refined products

According to a report by Chatham House on Syria’s oil industry, the Baniyas refinery plays a key role in the trade with Iran. The refinery has a stated capacity of 6 million metric tons of refining per year. Oil imports from Iran peaked to 125,000 BPD in 2015, and was needed in order to fuel not only Syrian society, but the conflict itself. The growing shortage of access to fuel started have created a toll on both the government and non-government-controlled areas. Kerosene burners are commonly used in household for heating and gas for cooking and decreased flow of fuel had impact on households. The collapse of access to oil and gas resulted in a drastic increase of deforestation in Latakia, Idlib, and Damascus, as firewood collection increased. At the same time, artisanal refining replaced professional refining and has been rampant throughout the east and parts of western Syria. The cutting down of forest and artisanal oil production have already laid claim to much of Syria’s lush vegetation, leading to localized pollution and breakdown of ecosystems.

On 22 June 2019, it is alleged that explosives were placed on underwater pipelines at the Baniyas Single Buoy Mooring (SBM) stations, located roughly a kilometre off the coast, causing a month-long oil spill that washed up the coastline north of Baniyas towards Latakia. Near the port, there are a handful of SBMs for both crude oil and refined products with pipelines leading to the Baniyas refinery. From images disseminated by the SANA news agency shows the exploded pipelines, and dead fish around the pipelines

Satellite images from ESA Sentinel 2, processed with Sentinel, provides an optical view on the 22-kilometre-long oil spill, while the Iranian crude oil tanker STARK 1 is waiting off the coast, as identified by TankerTrackers.com.

High-resolution imagery on June 25 distinctly visualizes the crude oil on the water surface along Baniyas’s northern coastline, while the Stark 1 was waiting nearby and seemingly divers were working on repairs

Helpful to have high resolution imagery dated June 25, 2019, showing the #oil spill at the coast of Baniyas refinery in #Syria caused by the damaged underwater pipelines. pic.twitter.com/LlzBnnrZ6W

#PT Iranian crude oil tanker STARK 1 https://t.co/P28fYMDtXW was waiting off the coast of Baniyas while some divers were trying to fix the damaged pipeline at the mooring on 25 June 2019 #OOTT pic.twitter.com/4hh0t5aG8o

Footage from local TV stations, which interviewed officials, confirmed the spills on the coast, and giving background information on the affected areas. The oil spills allegedly ended up on the coast all the way north at Latakia and on the beaches of Tartous, south of Baniyas, which gives it a range of roughly 100 kilometres. 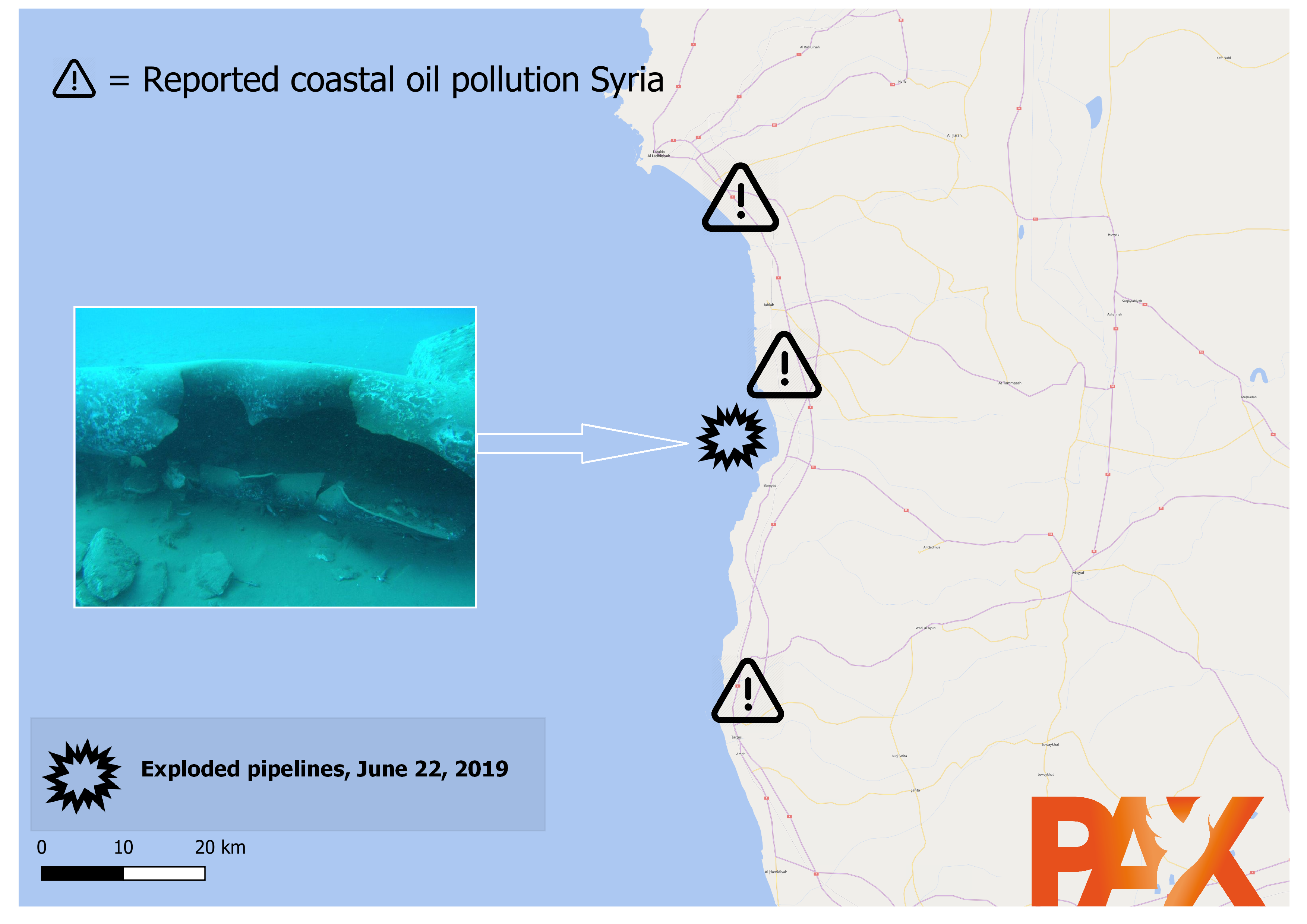 Yet the story did not end there, as over the course of weeks, more Iranian tanker ships were arriving at the SBM, including the 1-million-barrel-capacity crude oil tanker SILVIA I, and at the end of July, the SABITI crude oil tanker arrived at the SBM. 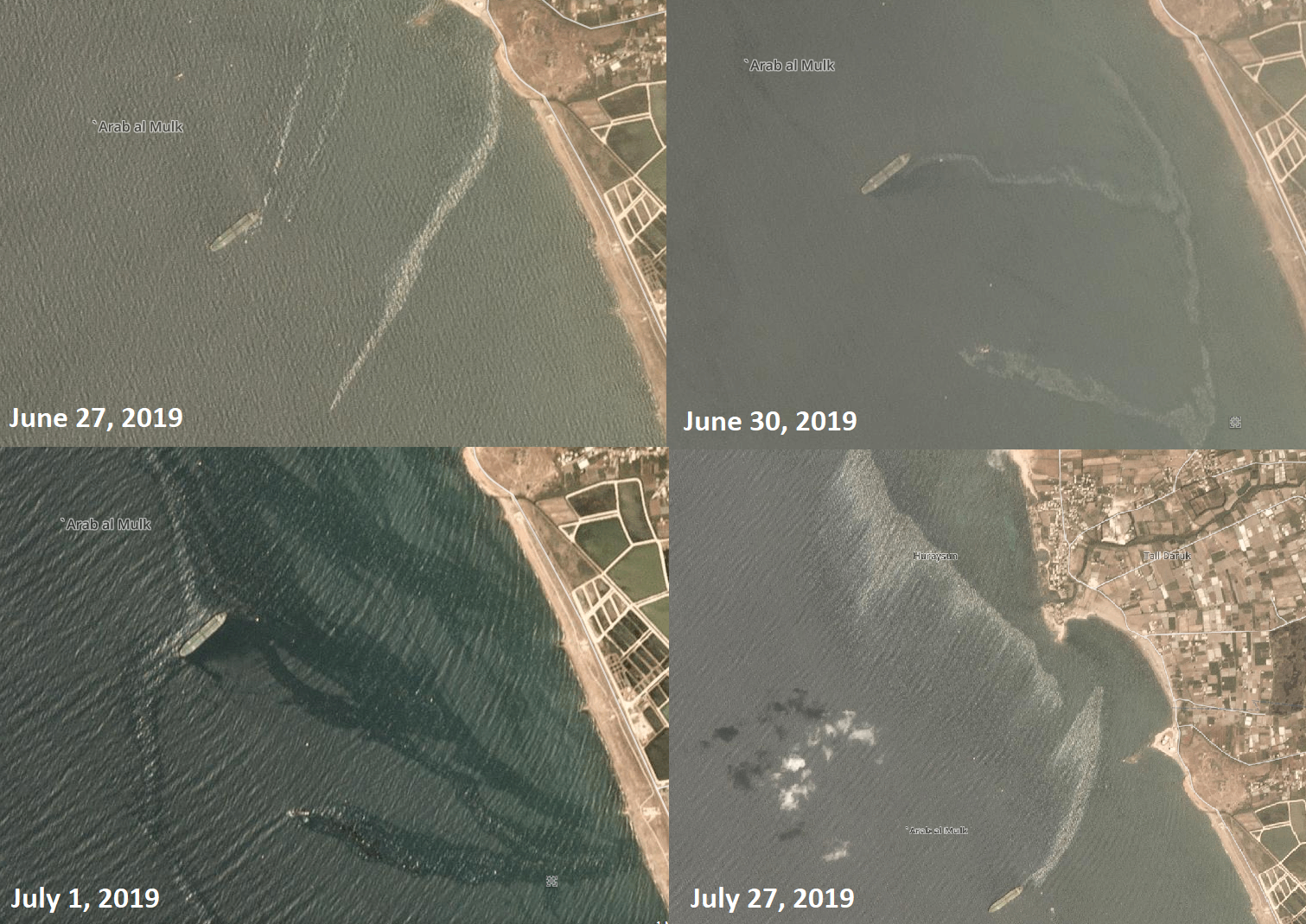 However, unlike the SILVIA I, the SABITI has not yet discharged its cargo, as one of the submarine pipelines has not been fully repaired. A fifteen-kilometer-long oil spill was visible near the ships on imagery dated July 27. 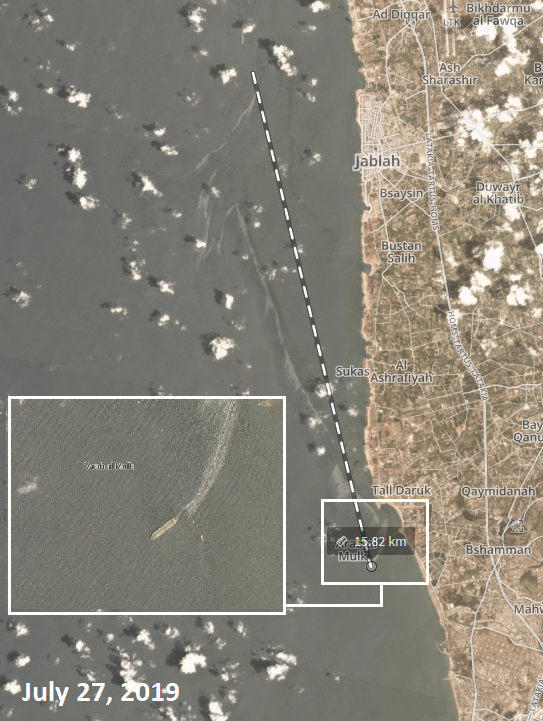 In June and July, imagery from Planet Labs shows both crude oil tankers (green decks) as well as tankers with refined product (red decks) at the Baniyas ports.

According to export from TankerTrackers.com, the spills visible are likely the residual oil that is often found in the pipeline, also known as pipefill. This could be possible, yet another option could also be minimal spills during discharging that end up in the water, as spills are visible near the ships on satellite imagery.

On July 30th, TankerTrackers.com has assessed (with Planet Labs imagery) that the SABITI has managed to discharge part of its oil cargo via the pipeline, but at a far slower rate than usual, most likely due to the unstable nature of the pipeline as it might not handle high pressure flow.

Rapid remediation of crude oil at the coast is important, as the volatile products from the crude oil will quickly evaporate, leaving the thick tar blankets of oil on Syria’s shores, affecting aquatic life and shore soils, including animal life such as birds, that can be contaminated with the crude oil slick.

In sum, open source analysis shows us that the attack on the oil pipelines at Baniyas SBMS continues to pollute the local marine environment of Syria’s coast. The announced repairs after the June 22nd incident did not seem to have great effect, as spills continued to be visible on satellite imagery provided by Planet Labs and ESA’s Sentinel-2.

At the moment, the size of the spill remains unclear, but reports indicate, if true, that crude oil or other oil products washed ashore over a stretch of 100 kilometres. At various subsequent attempts after June 22 of Iranian oil deliveries at the SBMs at Baniyas, new spills have been visible on satellite imagery, likely indicating failed repair attempts of the pipelines. This incident underscores the potential consequences of targeting oil infrastructure and the subsequent marine pollution fallout. As a secondary impact, absence of access to fuel for heating and cooking for Syrian civilians also resulted in alternative fuel sources being used, leading to deforestation and increase of makeshift refining in Syria. Considering the ongoing tensions in Deir ez Zor between the Syrian army, the SDF, local communities and other armed groups over the oil production, the looming Turkish threat to the oil fields in north eastern Syria and regional oil politics around import of Iranian oil, Syria will likely face a range of conflict pollution incidents over its oil resources.

Thanks to @TankerTrackers for additional information and support

Heavy Rains in Hasakah: An Open-Source Analysis of Catastrophic Damage