Khalil Dewan is an independent consultant on Middle East and North Africa country risk. His work focuses on the conflict in Yemen and the Qatar-Gulf crisis with a special interest in conflict analysis, political, security and violent risk. Contact via Twitter: @KhalilDewan

The Al-Qaeda in the Arabian Peninsula (AQAP) and the Houthi armed group are dealing with drone strikes in Yemen in starkly different ways.

Open source investigation reveals that AQAP are on the defensive over the threat of U.S. reconnaissance and armed drones, leading them to desperately convey to their members to avoid being intercepted for locational intelligence.

In juxtaposition, the Houthis have projected a far more aggressive propaganda narrative on defeating the threat of drones and aerospace threats by the Saudi-led coalition in Yemen.

AQAP and Houthi sources, however, cannot not be used exclusively as evidence when assessing strategy, tactics, and overall internal discussion on how these groups are countering drones — the chance for falling for propaganda is otherwise too high.

Based on open source Houthi media monitoring, it is clear that the group has attempted to make movement members and sympathisers confident that Houthis have the capability to defend threats posed by drone strikes.

Between October 2017 and January 2018, the Houthis published video footage on their social media network of what they alleged to be a U.S. surveillance drone that, they said, was shot down from the sky.

Muhammad Al-Bukhaithi, a senior Houthi politburo figure, told me in an interview that the “U.S. have not targeted us with air strikes or drones, but they are supporting Saudi Arabia with our [locational] positions.” He also added that the U.S. is “providing weapons to the Saudi-led coalition.”

The following are screen-grabs of a video clip shared on Houthi Telegram and associated websites of a drone taken down in Sana’a, which is currently under the effective control of the Houthi group.

The MQ-9, as claimed by the Houthis, was, they said, shot down by the Houthis on October 1, 2017. The video showed graphics that alleged that the Houthis obtained the weapons capable of striking drones, creating a suggestion that the group may possess the capability to destroy conventional threats.

It should be noted, however, that the photos Houthis provided in their drone propaganda do not match the silhouette of the MQ-9. 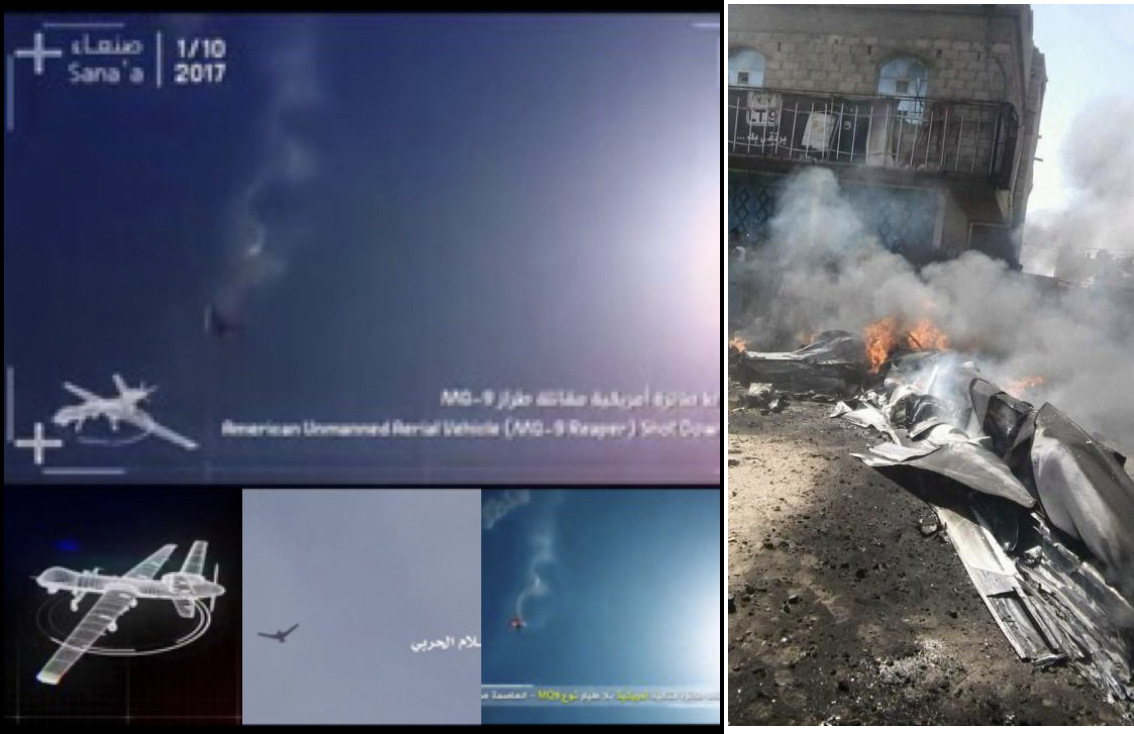 On November 24, 2018, the Houthi group claimed to have destroyed two drones belonging to the Saudi-led coalition on the West coast of Yemen.

The following pictures were disseminated across the Houthi-run Masirah news website in addition to the Houthi open source networks.

The drones were “smaller” ones — as seen in the pictures below. There was also a video on the official Houthi Telegram channel, showing the drones in closer detail. This suggests that the Houthis want their followers to believe that the group has the capability in destroying drones of varying sizes — but once again, one cannot make definitive conclusions based on propaganda alone.

Pictures can easily be manipulated in a variety of ways. One should also note that drones can crash all on their own — and with a smaller drone especially, one must be skeptical about equating wreckage with a shootdown. Hexacopter drones in particular are easy to lose control of, and there is no evidence available on open source to prove that the Houthis shot these small drones down. In 2017, the Houthis claimed to have shot down Saudi-led coalition drones. These photos, however, do not serve as evidence that the drones were shot down — and it is impossible to definitively say whom they belonged to. Source: Telegram

On June 7, 2019, the Houthi group reported on its official Telegram channel that they destroyed a U.S. MQ-9 drone over the west coast of Yemen. The following screen grabs show the notification sent to its followers: 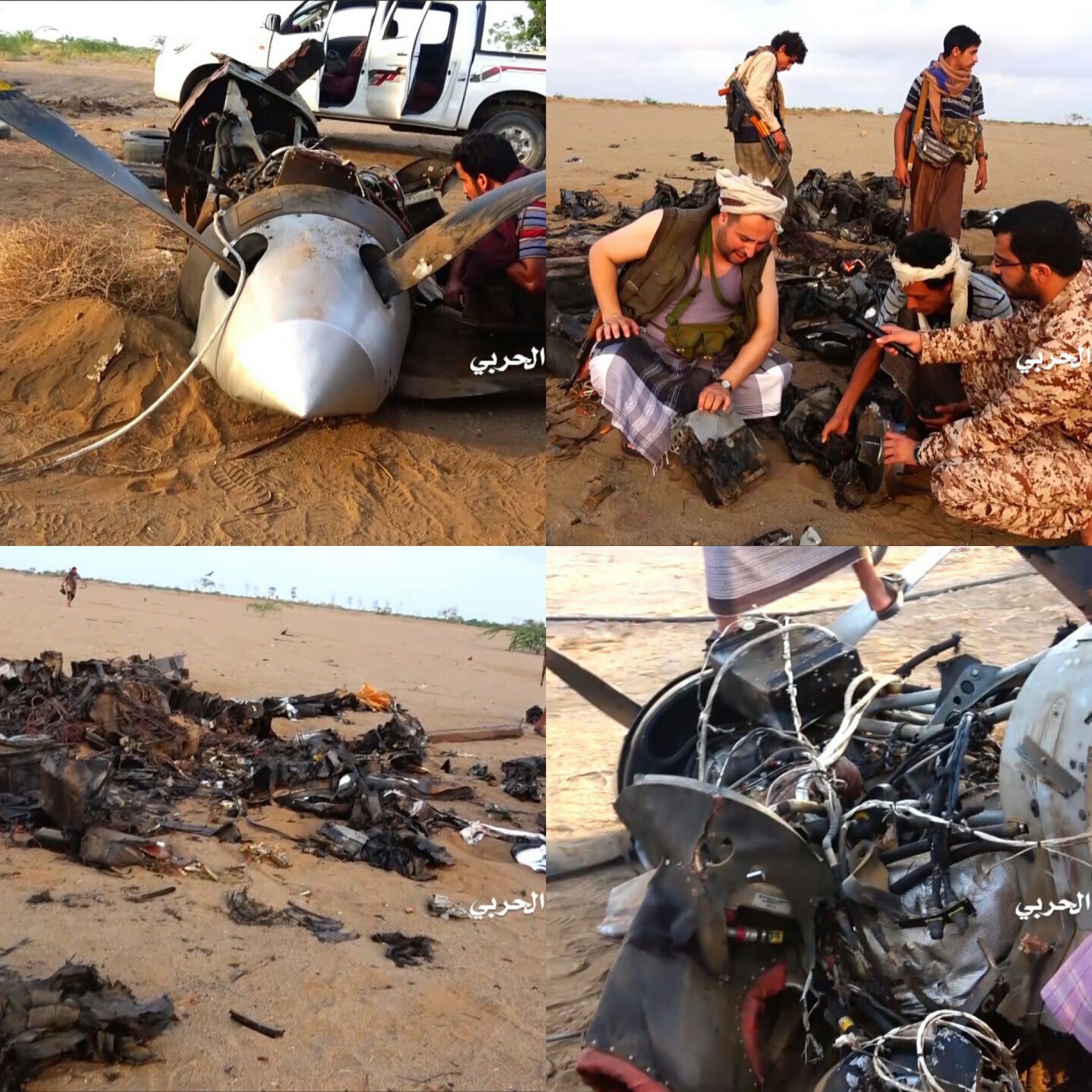 U.S. Central Command (CENTCOM) confirmed in a press release on June 16 that a MQ-9 drone was shot down on June 6 with a suspected Houthi operated SA-6 surface to air missile.

CENTCOM further stated that “the altitude of the engagement indicated an improvement over previous Houthi capability”, which the U.S. assesses was a consequence of Iranian material support.

It is therefore reasonable to suggest that the Houthis have made some strides in their military capability and weapon systems which poses a risk to the Saudi-led coalition and U.S. operations in Yemen. It is important to note that the Houthis have not publicized what weapons they used to shoot down the drone.

The Houthi group’s strategy is in stark difference to Yemen’s AQAP. On January 17, 2018, the Al-Qaeda affiliate published a 38 minute video stressing the need to control communication internally to avert interception from intelligence agencies. This points to an internal narrative that the group is under threat without military means to counter it.

The January 2018 video had a dramatic title, “Secrets, its [sic] Dangers and the Departure of the Best of Us”

The video was disseminated across social media and open source channels. Reading between the lines, the message was that AQAP are experiencing drone strike fatigue, and felt the need to publish a video to warn the wider group of the dangers. It also indirectly targeted the message toward other “mujahideen” groups/Al-Qaeda affiliates as a kind of lesson. 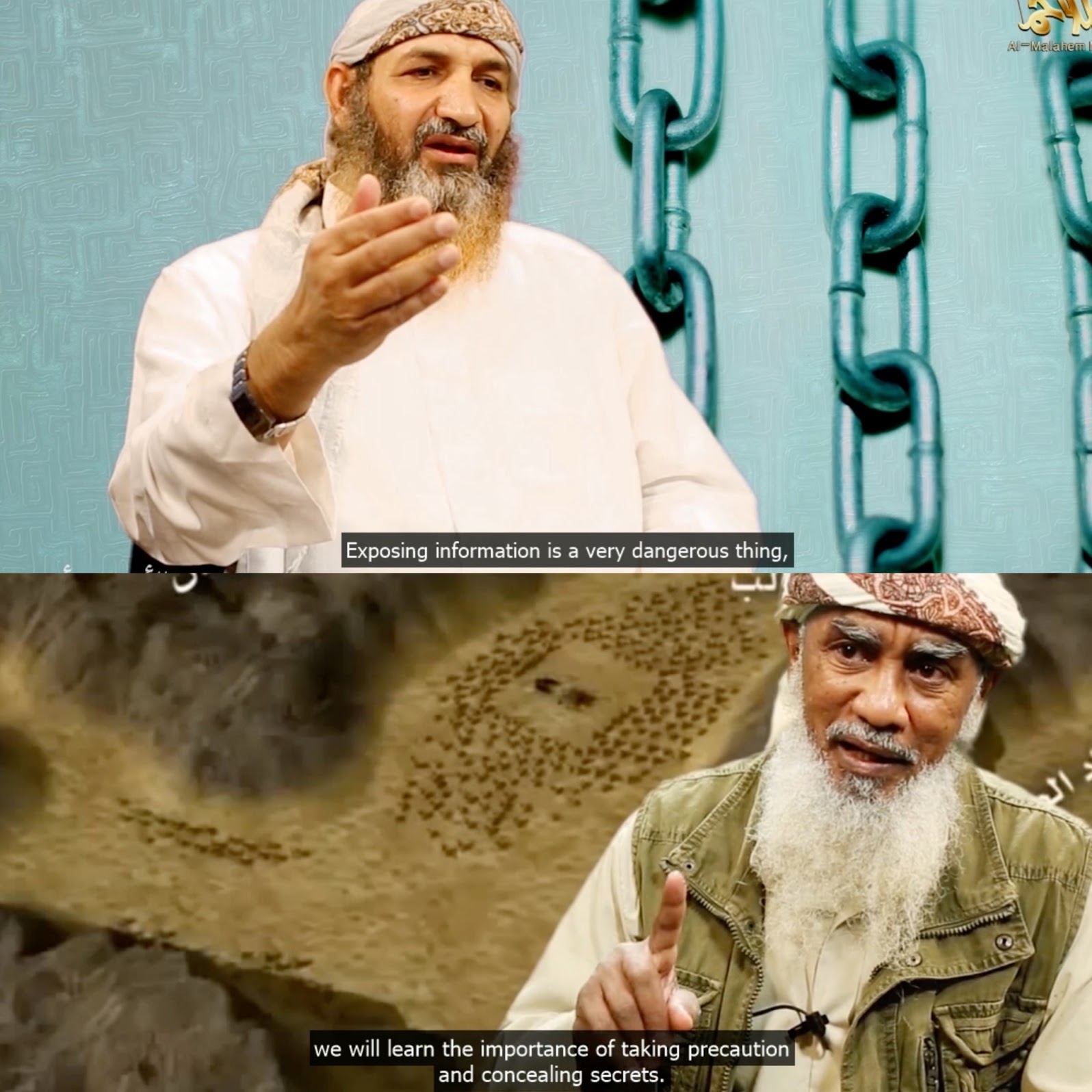 “Among the many reasons that sum up the enemy’s capabilities to kill, imprison or disrupt the plans of the mujahideen is negligence and the incapability to be able to preserve secrets”, Sheikh Ibrahim Abu Saleh warned in the video.

Abu Saleh continues to warn AQAP followers that secrets are exposed through casual gatherings and through mobile phone usage. Adding to the narrative, Ibrahim Al Qosi calls on fighters to “preserve the tongue,” and not “unintentionally speak a word” that may expose the group’s military activity. AQAP’s video showed six alleged spies, all in AQAP captivity, talking about how they infiltrated the Al-Qaeda affiliate group in Yemen and sought to verify targets for drone strikes. The “spies” could have been told to say anything on camera — still, it is notable that AQAP went as far as produce a video with this message, and that it would feature a multitude of participants. 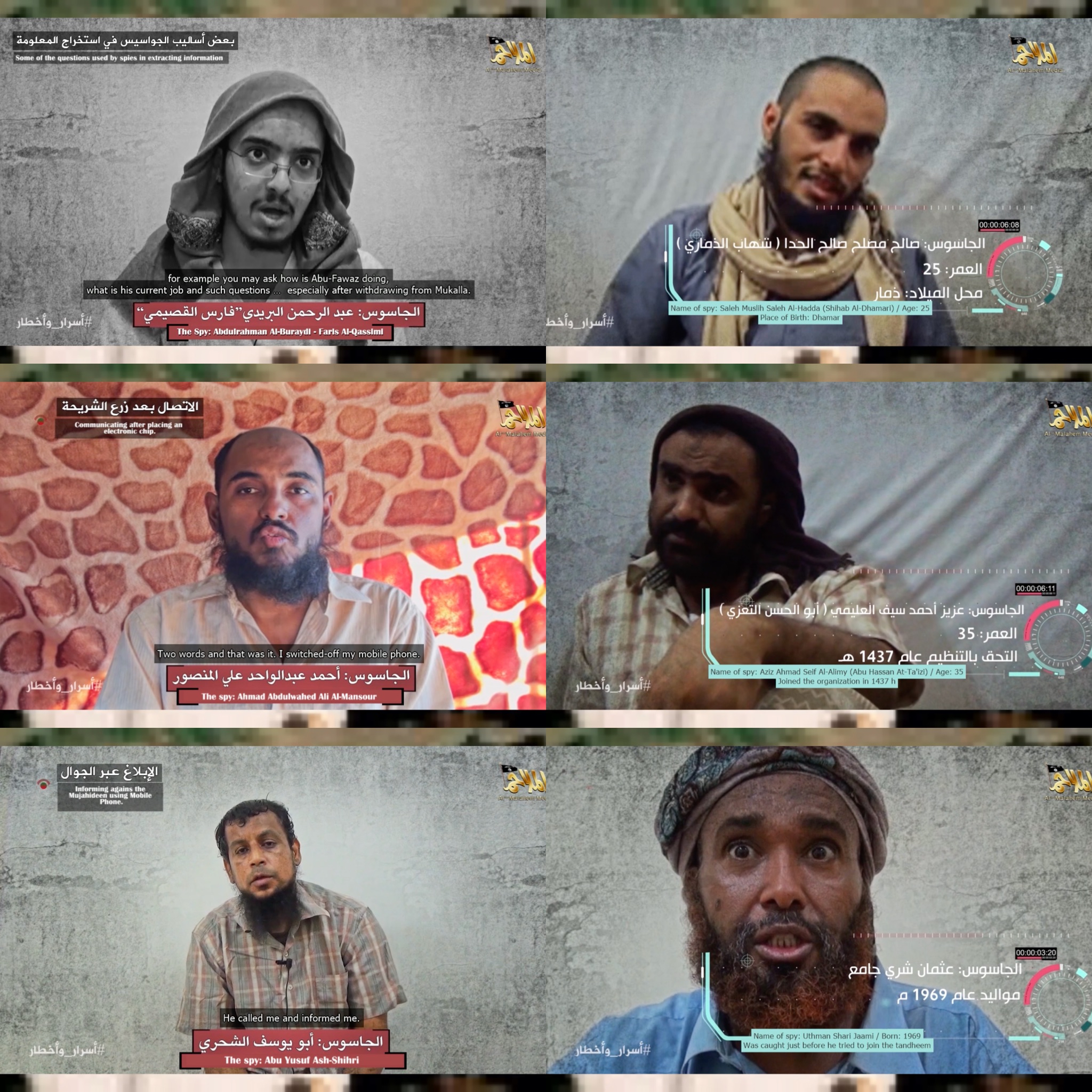 In an interesting discussion found on AQAP’s Al Malahem Media, wives of fighters were also blamed for gossiping with friends about military activities, initially shared by their husbands at home. The six individuals presented as “spies” by AQAP then go on to tell how they captured intelligence for the use of targeted killings. AQAP’s now deleted Telegram channel has claimed that AQAP releases prisoners if they provide valuable information that the group can use, but such information cannot be independently confirmed.

“Secrets are exposed via general gatherings of the Mujahideen or spread through mobile phones which are considered as spies in their own sense”, Ibrahim Al Qosi said.

AQAP’s video presents Faris Qassimi, an alleged spy according to the group. Qasimmi says that he managed to kill an AQAP official by planting an electronic chip which led to a strike. Qassimi says that a small amount of information negligently divulged by regular AQAP foot soldiers can provide a location of a leader, or if there has been a change in field command structure. Qassimi also explains he was instructed not to ask too many questions when initially joining AQAP, to build trust, and then ask certain questions. Once again, it is difficult to judge the veracity of the statements of a man in captivity.

In the video, two of the six alleged spies presented by AQAP said in the 38 minute video said that they were instructed to target foot soldiers who generally always keep their smart phones turned on. The alleged spies waited for key moments to ask regular foot soldiers for a certain person’s phone number. The spy would then call the person to confirm that the intended target’s number is verified and is the right person. The number was then allegedly shared with intelligence services.

The video put AQAP soldiers in the following three categories:

1: The AQAP member who is easy to converse this and will tell you everything he knows. This AQAP member shows off his knowledge to a second person or to a gathering of AQAP fighters.

2: The AQAP member who doesn’t say anything until asked and probed.

3: The AQAP who says silent and won’t discuss anything.

A second alleged spy touted by AQAP in the video explained that when talking on the phone, AQAP foot soldiers gave away valuable information. For example,“[We] have brothers who will be travelling and may pass you by” is information that can be used, the alleged spy explains. “Abu-Ali Al Taizzi is no longer the Amir, he is replaced by Abdullah As-San’ani” — also intelligence.

A man referred to as Al-Buraydi, one of the individuals alleged to be a spy as per the AQAP video, explained that mobile phones are a primary means for intelligence capture. “Eavesdropping, drone strikes, and pinpointing locations with ease”, Al-Buraydi thus summed up the usefulness of phones.  Mobile phone signals provide intelligence agencies the ability to intercept communications, monitor conversations and, if required, find the location of the phone — which could then lead to executing a drone strike.

Social media account verification is another means of intelligence gathering, as confirmed by Al-Buryadi. Al-Buryadi claimed that he was instructed to find out AQAP foot soldiers’ aliases and social media accounts they run so that intelligence analysts could continue to monitor them. Because some social media accounts analysts follow may go dormant over time, the alleged spy was tasked with finding out whether a new alias was used online, what platform it was being used on, and whether or not there was any lapse in use due to lack of an internet connection, etc. — or so he said in the video.

Based on relevant open sources available on this topic, it appears  that the AQAP group is feeling the fatigue of U.S. drone strikes and air strikes as part of the Saudi-led coalition in Yemen. The Houthis, on the other hand, are trying to signal to their followers — and, by extension, the observers of the conflict – that aerial threats are being dealt with militarily.

AQAP also sent all their fighters an open letter dated December 2018, prohibiting the use of social media and mobile phone communication — which could explain the reduced activity of AQAP’s official Telegram and other affiliated accounts. Translation:
1) “The complete prohibition to use mobile phones and communicate through the internet”
2) “To whomsoever disobeys this, will face a penalty with regard to the level of his crime”