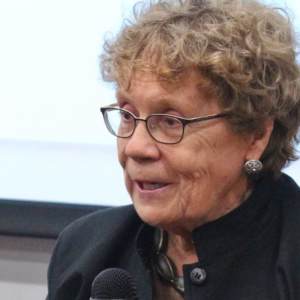 Cheryl Rofer writes scientific and political commentary. She was a chemist at the Los Alamos National Laboratory for 35 years. She regularly provides background information to reporters for major publications and has been quoted in the New York Times, Washington Post, and Vox. Her work at Los Alamos included projects in fossil fuels, laser development, chemical weapons, open-source intelligence techniques, and the nuclear fuel cycle. She has published in scientific and political science journals and edited a book. She holds an A.B. from Ripon College and an M.S. from the University of California at Berkeley.

In the wake of the August 2013 Ghouta chemical attack, Ted Postol attacked Dan Kaszeta’s argument that hexamine, C6H12N4, was a marker for Sarin made by the Syrian government. Postol is a professor emeritus of Science, Technology, and International Security at the Massachusetts Institute of Technology; Kaszeta is a consultant with experience in chemical warfare issues and worked for the United States Secret Service, the folks who guard the President.

Amines are a part of Sarin production. When Sarin is manufactured, HF is produced. That HF will corrode equipment and destroy the Sarin, so something is needed to neutralize it. HF is an acid and amines (hexamine and others) are bases, which tie up (or scavenge) the HF and neutralize its damaging properties.

We now know that hexamine is the Syrian government’s amine of choice for Sarin manufacture. Postol got that wrong because of two misunderstandings, one in elementary chemistry and the other in basic chemical technology. They are accompanied by smaller errors. The sum of the errors gives the impression of someone with no knowledge of chemistry being aided by a person who has taken Chemistry 101. Postol published his and Kaszeta’s emails on the subject, but has not compiled his argument into an internet post or journal article.

Amines are nitrogen compounds derived from ammonia, NH3. The three hydrogens point to the corners of a tetrahedron. The fourth corner is filled by an electron pair. In amines, carbon-containing groups replace one or more of the hydrogens, but the electron pair remains.

That electron pair can bind to acids. The positively charged hydrogen in HF, which is also called a proton, attaches to the electron pair. That leaves a negatively charged fluorine, which sticks around to form a salt. Many drugs are ammonium salts.

Postol gets hung up on a question of solubility. Carefully planned experiments for first-year chemistry students carry out acid-base neutralizations in solution. This is an excellent pedagogical practice, particularly with the aid of color-changing indicators, but it is not the only way this chemistry can be done.

Postol tries to work out the chemical engineering of Sarin synthesis from what he believes are first principles, but a great deal of chemical engineering depends on empirical findings and workarounds. He believes that Sarin must be produced pure, with no solvent. But the reaction produces significant heat, which a solvent must remove. Thus, he takes the stoichiometry of a solvent-reactant mixture that is used in Sarin preparation as the stoichiometry of the reaction. [Stoichiometry is another word for the ratios of reactants and products in a chemical reaction.] A military manual lists the mixture of isopropanol, a reactant, and isopropamine, an acid scavenger, as “OPA.”

But the structure of the isopropamine molecule tells us how many HF molecules it can scavenge. Isopropamine, C3H9N, has only one nitrogen with one electron pair and thus can scavenge only one HF molecule. Postol badgers Kaszeta for a “scientific reference” that gives the number of HF molecules hexamine can scavenge. Hexamine has four amine nitrogens, so the answer is four. No reference is needed. A more advanced view notes that the molecular configuration somewhat hides the electron pairs, so four would be the maximum number. The actual number might be less.

the equilibrium constant is represented by

Where the brackets indicate concentrations. More accurately, one might consider what is called chemical activity, but concentrations are a reasonable approximation for activity.

Adding an excess of one of the reactants pushes the reaction toward maximum product yield. In the case of the last step in the Sarin synthesis, the two reactants are methylphosphonyl difluoride and isopropanol. The reactant used to push the equilibrium would be the cheaper and easier to procure, in this case, isopropanol, also known as rubbing alcohol. It can also be used as the solvent. Postol assumes that no solvent is used, because it would have to be removed from the product Sarin. But chemical engineers know many ways to remove solvents, and it’s possible that in a binary shell the solvent would aid dispersal.

Additionally, Postol’s concern about the solubility of hexamine is misplaced for reasons of chemical technology. Agitation can be used to mix a powdered solid with a liquid to achieve a desired reaction. Chemical engineers have many ways to make difficult reactions work.

There are a number of smaller mistakes in Postol’s argument. He misunderstands the difference between alcohols and ketones in his comment about hydrogenation of acetone on page 4; fluorine and its derivatives are misspelled in his figures; he misunderstands what a hydrogen bond is on page 9 and ignores its function in solubility; on page 10, he switches from weight percent to volume percent without introducing a density.

Postol is operating from a naive set of assumptions, based on limited experience in a first-year chemistry laboratory, presumably the experience of his informant. The result is a wrong-headed approach to the problem and nonsensical demands of Kaszeta. Nothing in Postol’s argument sounds like it was written by a chemist or someone with a working knowledge of chemistry.

What We Know About Hexamine and Syria’s Sarin