Is this the Site of a Future Turkish Base in Syria?

On June 28, 2017, two Turkish media outlets published footage of a location within Syrian territory where the Turkish Armed Forces (TSK, from Turkish Türk Silahlı Kuvvetleri) “allegedly will build a base” if it “enters” the Idlib governorate.

Firstly, A Haber broadcasted a short reportage with “impressions” from Idlib. A Haber is a nationwide Turkish TV-channel founded in 2011. The channel is said to have a pro-Turkish government stance. At the end of the reportage (3:07 to 3:27), the reporter says that “following the Astana talks in July” the TSK along with the Russians is rumoured to enter Idlib, “where they [TSK] will have their garrison.” As seen in the screenshots below, the reporter points to a mountain in the distance, then the camera zooms in on it, showing it in greater detail. The claim is that Russian and Turkish forces are expected to enter the Idlib governorate at the same time, but are not expected to share the same garrison. 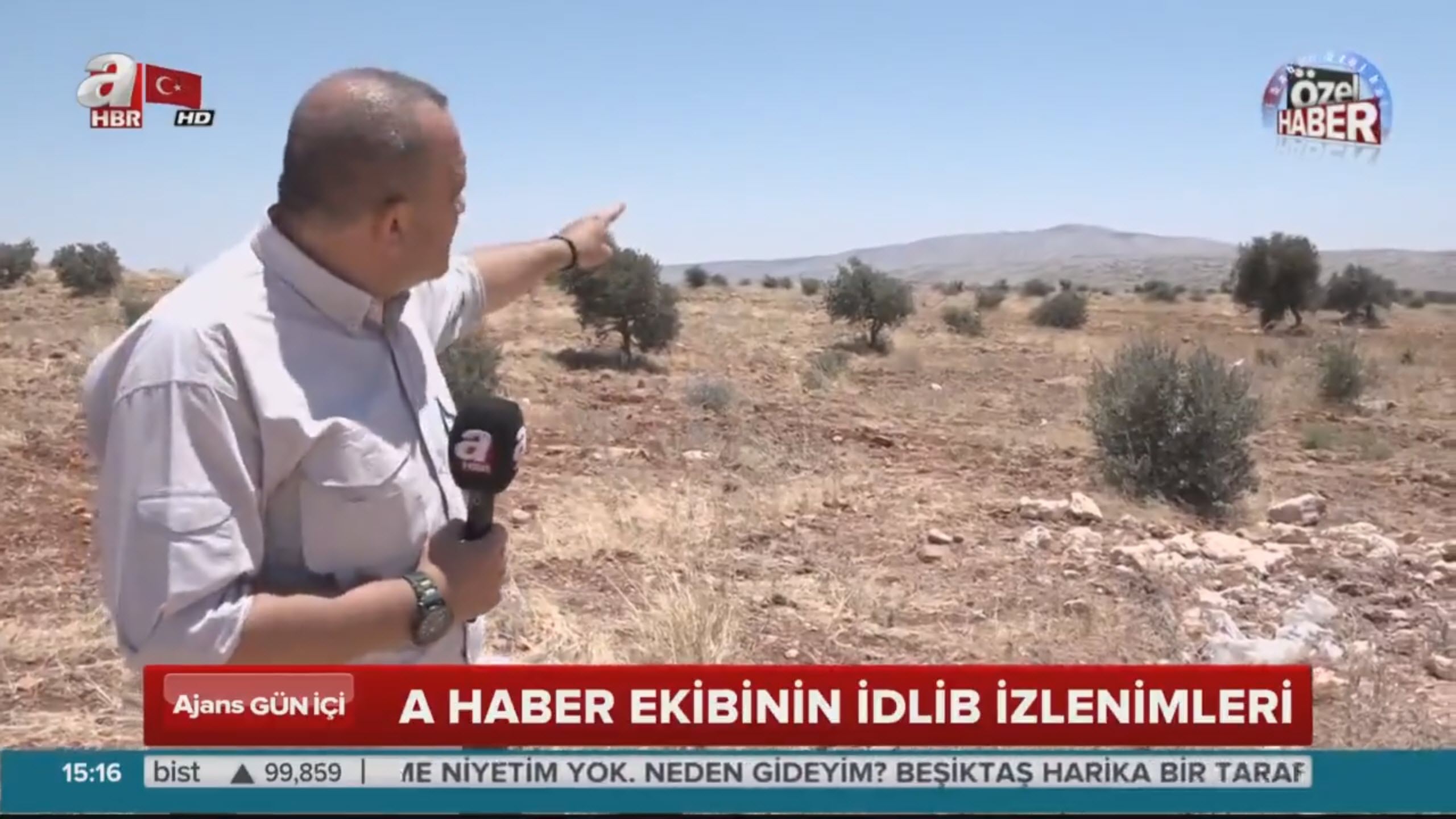 Screenshot from the A Haber reportage describing the location where Turkish Armed Forces will “allegedly build a base” if it enters Syria. 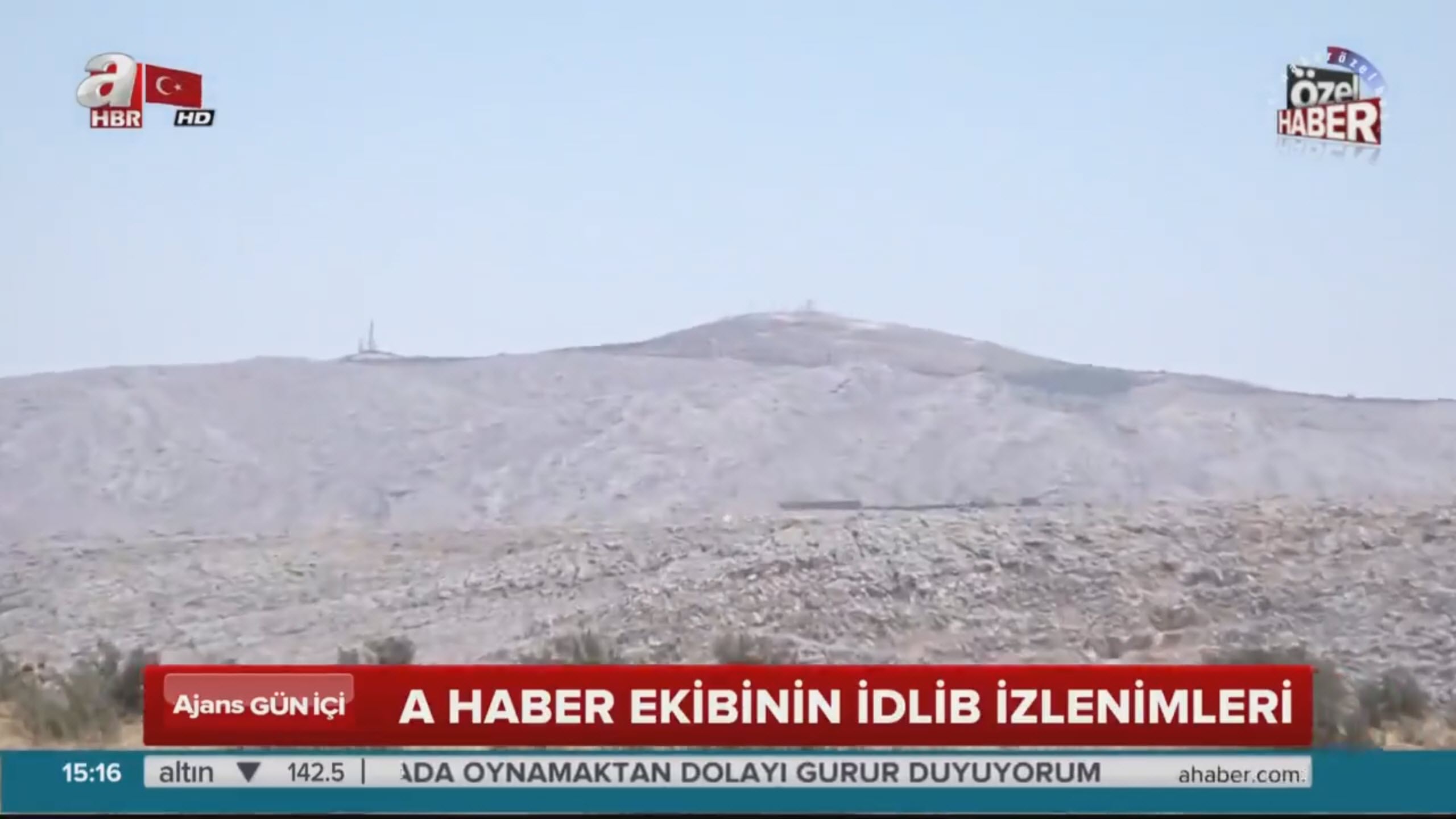 Screenshot from the A Haber reportage describing the location where Turkish Armed Forces will “allegedly build a base” if it enters Syria.

Secondly, Sabah, again known for its pro-government stance, published an article with a photo of seemingly the same mountain, which is said to be the second-highest in Syria and overlooks the Afrin, Sarmada and Ad-Dana area. In its report it is also stated that it “visited critical areas” of Idlib which are of “vital importance to Turkey, Russia, the US, and Syria”. The article further states that “the majority of people in Idlib welcome the idea of Turkish soldiers entering the city on the grounds that Turkish forces would provide security and put an end to terrorism.” 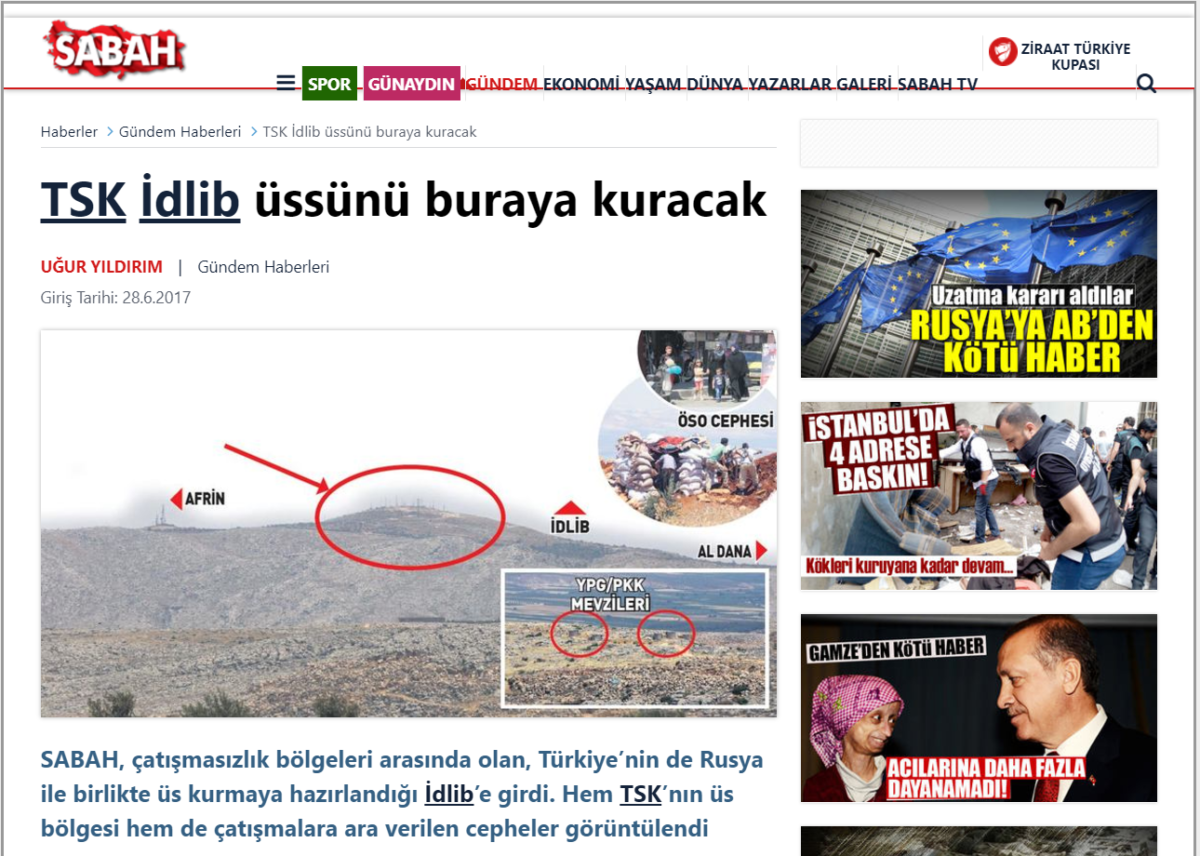 The coverage from within Idlib governorate by A Haber and Sabah suggests there was a press junket organised. It would be near to impossible to enter Idlib and also be secure without official approval and support, some sources say.

Geolocation: Where Is It?

While these may only be rumours, it is worth trying to geolocate the location. The Sabah photo includes some information about the supposed geographical location, showing the places of Afrin, Idlib, and Ad-Dana.

Using Wikimapia and LiveUAmap, two websites where users track, amongst other things, the frontlines of the war in Syria, it is possible to get a sense of territorial control in Syria. Given that the reporter is in opposition-held Idlib, it is likely that the mountain is somewhere in territory held by those groups, and near the frontline with the mainly-Kurdish People’s Protection Units (Kurdish: Yekîneyên Parastina Gel‎, YPG). From there, it is simply checking mountains with antennas on top near the frontline, as those are clearly visible on both the video and photo footage. 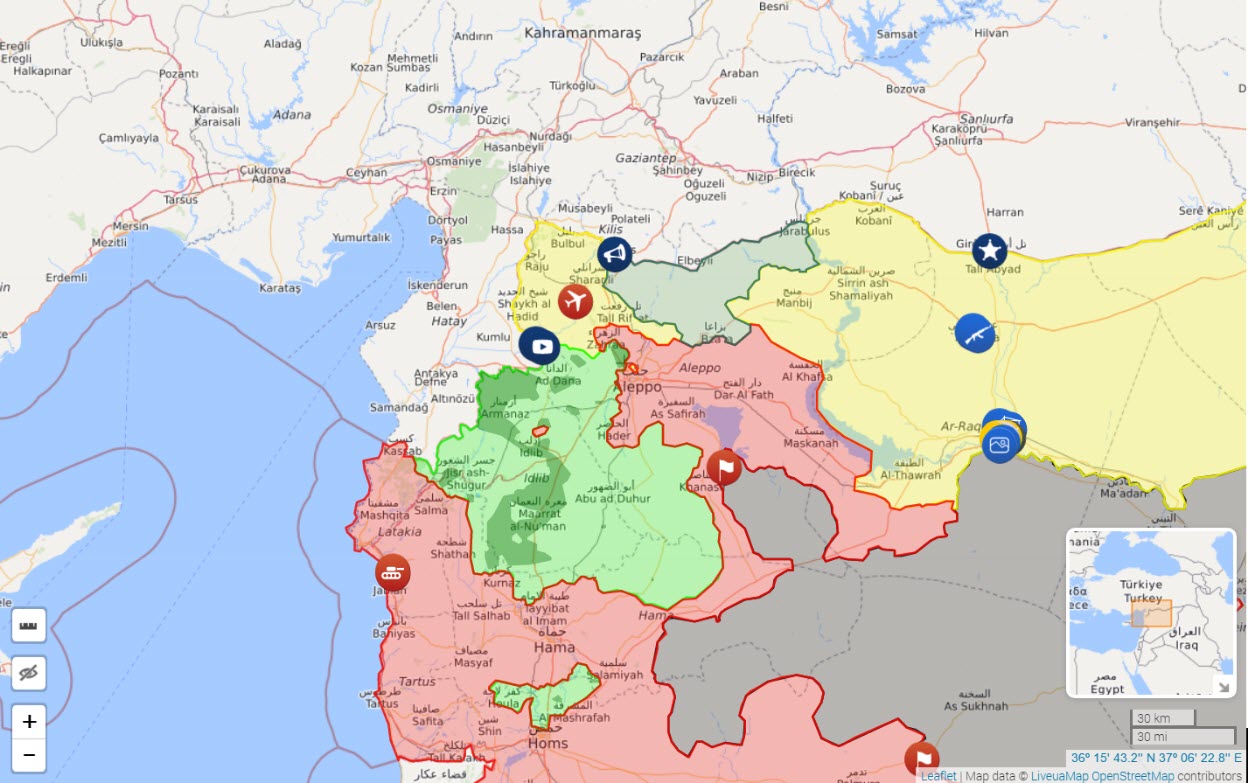 Using Google Maps 3D mode, it is possible to get a better understanding of the height and shape of the various mountain ranges. One of the mountains seems to be a fit, and when taking a closer look the patterns of antennas, vegetation, shape, is indeed similar. Besides, the geographical location is somewhat consistent with the annotations of locations on the Sabah photo.

Geolocation of the reported #Turkey's garrison inside of #Syria's Idlib province. https://t.co/zg8nc1X6fB pic.twitter.com/pNnaHmAs48

The summit is located around 2.5 kilometers west of Darat Izza in northwestern Syria, roughly 12 kilometers from the Turkish borders. Here are links to the location on Wikimapia.

What Do We Know About the Location? A Timeline

The mountain in question is known as Sheikh Barakat. The summit shown in the photo and the video is the highest point of the Sheikh Barakhat and Simeon mountains, and is home to a radar base established by the Syrian military.

On June 25-26, 2012, the Free Syrian Army (FSA) captured the base, as a Reuters report mentioned at the time. Footage was published on YouTube by rebels that same day, showing the deserted radar base.

The base included several radar systems, such as the FSU P-12/18 (SPOON REST) radar system, and the newer Chinese type 120 2D surveillance radar, as was detailed by IHS Jane’s contributor Sean O’Connor in a blogpost and more detailed report.

Fast forward to May 2017, when rumours started spreading that a joint TSK and FSA offensive on Hayat Tahrir al-Sham (HTS) were spreading. At this time, it is believed that Harakat Ahrar al-Sham al-Islamiyya, commonly referred to as Ahrar al-Sham, a coalition of multiple Islamist and Salafist units fighting the Syrian government, was in control of the Sheikh Barakat summit.

As rumours were also spreading that TSK may be using it as a launchpad against HTS, some claimed the group was massing troops nearby as they feared Turkey would use it, to which Ahrar Al-Sham vowed to retaliate any attack against the summit. The text quoted by Twitter-user @IbnNabih1 is from an Ahrar Al-Sham media activist claimed based in the area around Darat Izza. None of these claims can be verified by using open sources.

Following the June 2017 reports in Turkish media, HTS-aligned media channel Fida Media Foundation claimed that there were “confirmed reports that the Turkish Army will enter Idlib city next week”.

The Sabah article also mentions the existence of HTS in Idlib and states that Idlib has been under their control since the start of 2017. The article  makes no reference to the Al-Qaida-linkage nor does it remotely suggests HTS as a TSK target.

When analysing satellite imagery of the site, it is worth noting that the most recent satellite imagery is from February 2017 and that no single armoured vehicle can be spotted. Besides, the defences visible on the February 2017 imagery are significantly different from TSK bases established in the northern Aleppo governorate. It is thus not possible to confirm nor deny TSK presence on the mountain.

Satellite image comparison of the summit of Sheikh Barakat of September 2015 and February 2017 (most recent) imagery. pic.twitter.com/75GTOAKFDs

However, it is noting that pictures were posted on May 8 showing how bulldozers are seemingly constructing roads on Sheikh Barakat. While this does not proof anything related to TSK, it worth noting that Twitter-user @seyfuddinq claimed that the bulldozers were operated by Katiba ibn Taymittah, an Ahrar al-Sham brigade that has been active in the Darrat Izza area for years. Which brings us to the next point: TSK has already established military bases on Syrian soil.

While the rumours of a TSK garrison in the Idlib governorate are not confirmed, it worth noting that TSK has already built two well-fortified bases in the northern Aleppo governorate during Operation Euphrates Shield. During that military campaign, which was aimed as establishing control over, amongst other places, Al-Bab, several of TSK’s military vehicles were damaged or destroyed, open source monitoring shows. While fighting is ongoing in other parts, Turkey has set up bases in the territories currently under its shared control with the FSA groups. Satellite imagery posted by Twitter-user @obretix shows how the bases, respectively located near Dabiq and north of Manbij, have developed over time.

The summit of the Sheikh Barakat Mountain is a very strategic position. Indeed, the location could function as a forward operating base for a potential offensive by TSK on Afrin, a city held by the YPG. Amid reports that TSK is gearing up for such an offensive (which, if true, would be though, some argue), local residents in and around Afrin claim they will take up arms to protect “their land from a [Turkish] invasion”.

The author would like to thank “Has Avrat” and fellow Bellingcat-contributor Aric Toler for their feedback.