On the 23rd of December, the water supply to Damascus was cut off by the Damascus Water Authority after it was alleged to have been contaminated with diesel. This has resulted in over four million people having no regular access to water, and the UN releasing a statement declaring its alarm. There are competing claims as to whether this was the result of action by the rebels, or from bombing by the regime. This article will use open source information to examine this event and try and establish who is responsible. Unless explicitly stated otherwise, all times are in UTC, including time-stamps on tweets and posts.

The water supply to the Damascus basin mainly relies on the Barada and Fijeh springs. The Barada Spring supplies Lake Barada, which is the source of the Barada River. This river flows past Ain Al-Fijeh in the Barada Wadi, where it is joined by water from the Fijeh Springs, which provide approximately 50% of the water flow. This flow provides the vast majority of water to Damascus, where it is treated and distributed around the city. 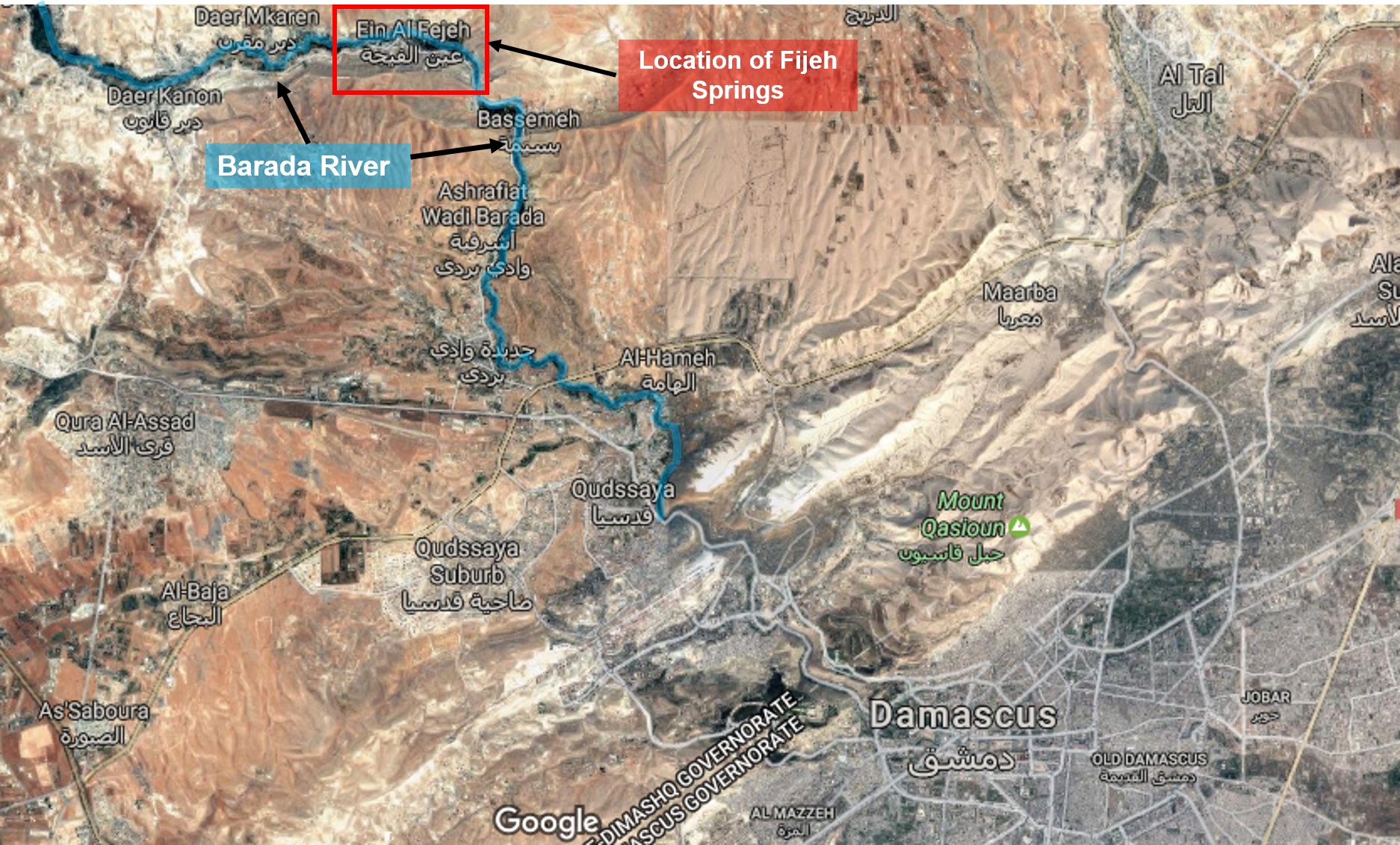 Map in General of the Fijah Springs, (Credit: Google Maps) 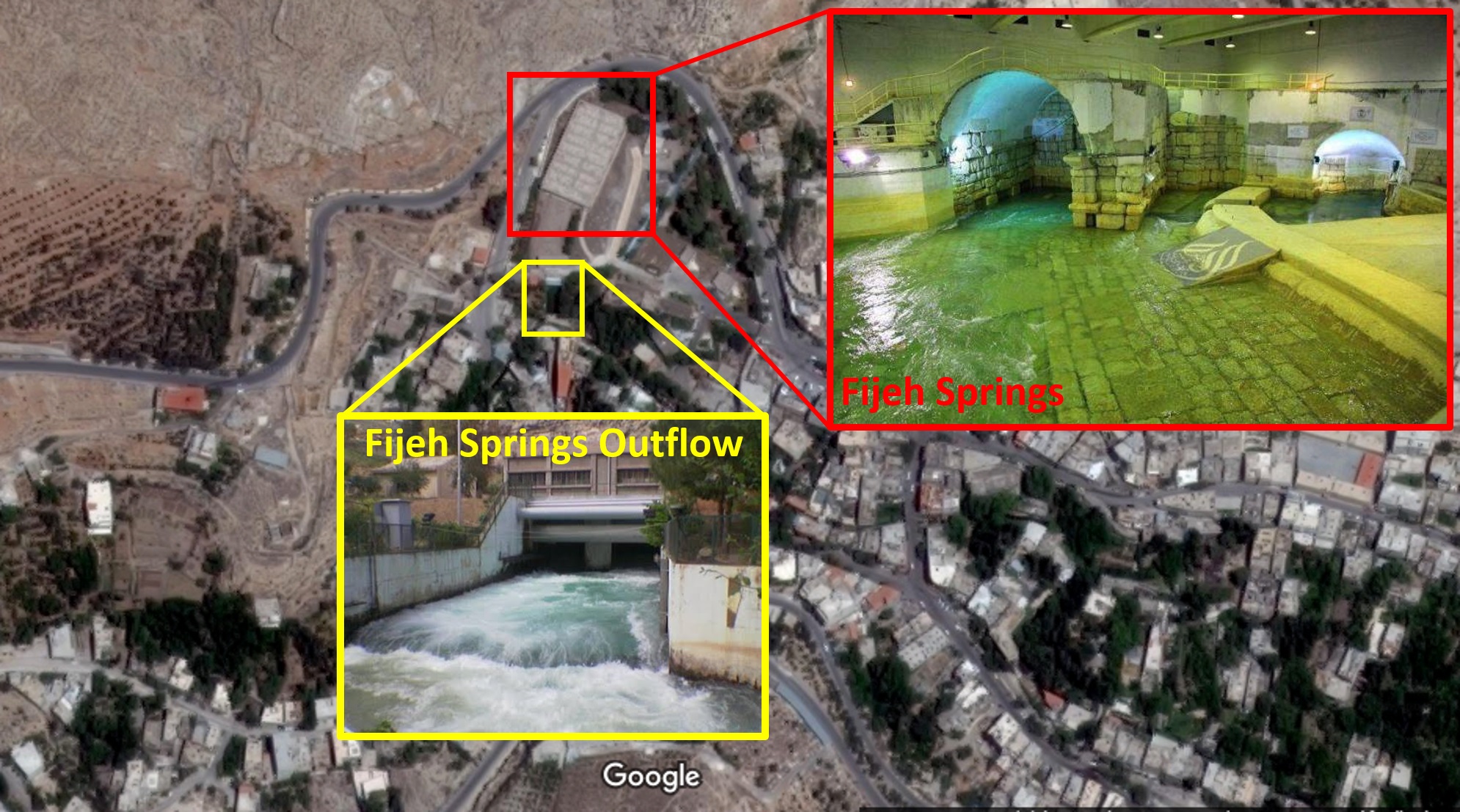 The control of drinking water for several million people is a vital strategic asset, providing a huge amount of leverage to the faction which controls it. This gives the rebels who control the Barada Wadi disproportionate influence relative to the territory they control.

The rebels have used this influence to prevent the incursion of regime troops into the Barada Wadi, as well as other rebel-held areas, by threatening to block the water supply to Damascus. This appears to have happened several times, notably on July 6th 2015, when the Wadi Barada Shura Council shut off the supply for several days in response to a regime offensive on Zabadani.

Therefore, the situation around the Fijeh Springs is not a zero-sum game: If the regime attempted to take the Barada Wadi area they risk the water being cut off to Syria’s largest city, while if the rebels inflict permanent damage on the springs they lose all influence and risk their pocket being destroyed. This makes the status quo the least-risky option for both parties, the rebels get to control their pocket, while the regime receives drinking water for the Damascus basin.

Although the Syrian regime maintains that it was the rebels that poisoned the spring, there appears to be significant amounts of media showing bombing in and around Al Fijeh on the 23rd December, as well as damage to the structure which covers the spring-heads themselves. There is also evidence to suggest that the rebels had prepared some of the infrastructure for demolition on or before the 25th December.

Evidence of Bombing on the 23rd December

From the available media, and rebel claims, it appears that there was regime bombing on the 23rd of December, in and around the location of the spring structure. 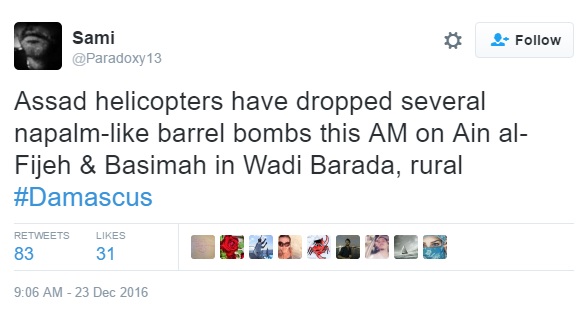 Video Posted at 1604 on 23rd December showing damage to Ein Al Fijeh close to the springs: 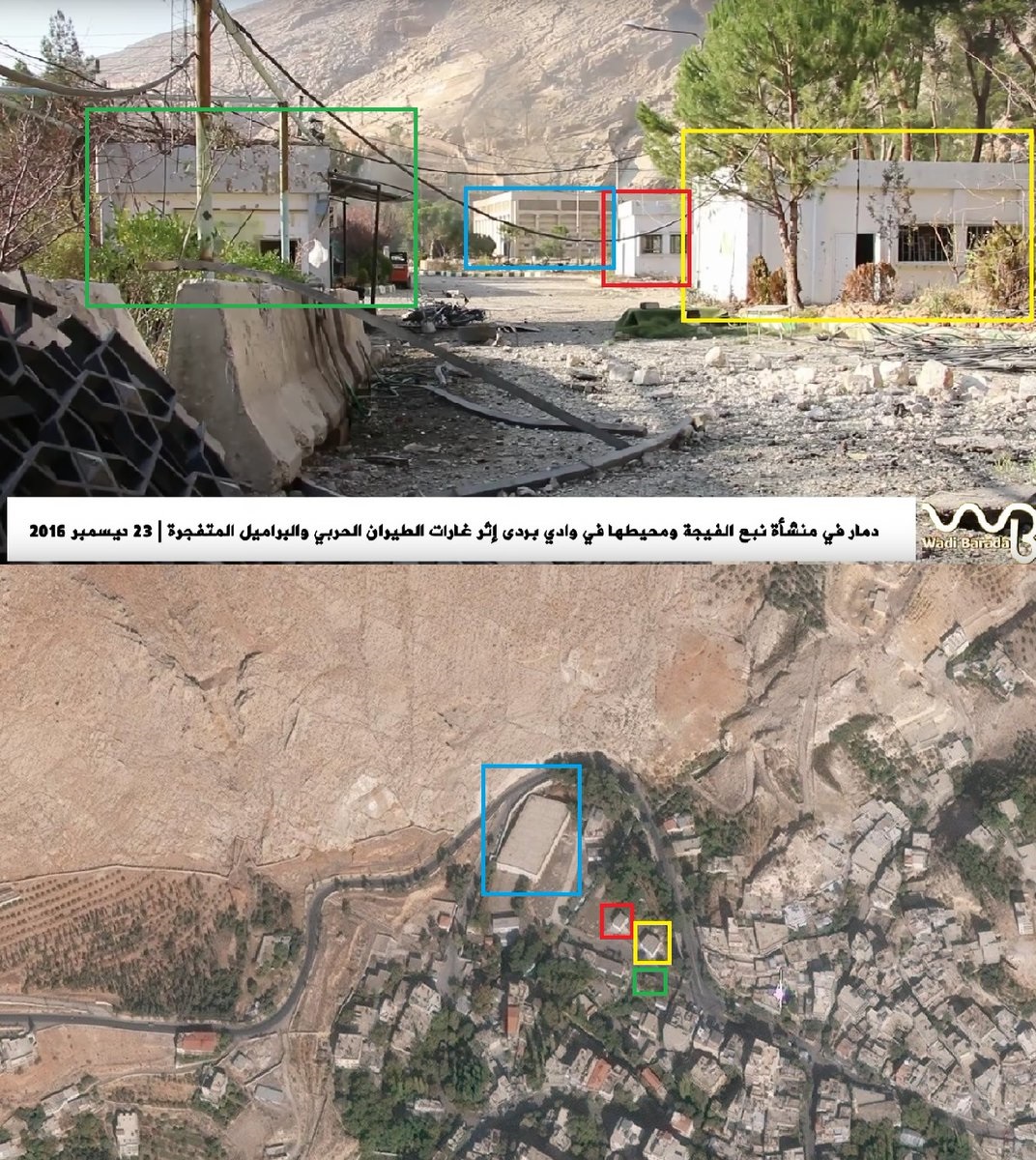 Geolocation of the above video, showing proximity to the spring structure, marked in blue. (Credit: @wasc_algonquin)

Damage to the Spring Structure

Using media freely available on Twitter, Facebook and Youtube, it is clear that the structure that covers the spring was significantly damaged on or after the 23rd December.  There are multiple videos showing this damage, as well as imagery: Image showing external damage, allegedly from an SAA position. Note how the wall nearest to the camera shows damage.

Below we see satellite imagery comparing 25/10/2016 with 29/12/2016. Note the obvious damage, as well as what appears to be a crater highlighted in red close to the outflow. (Courtesy of DigitalGlobe NextView License) There is also a video which shows a bomb of some sort striking very close to the spring structure. Due to it being included in an Al Jazeera News report it is not possible to verify the date it was uploaded. 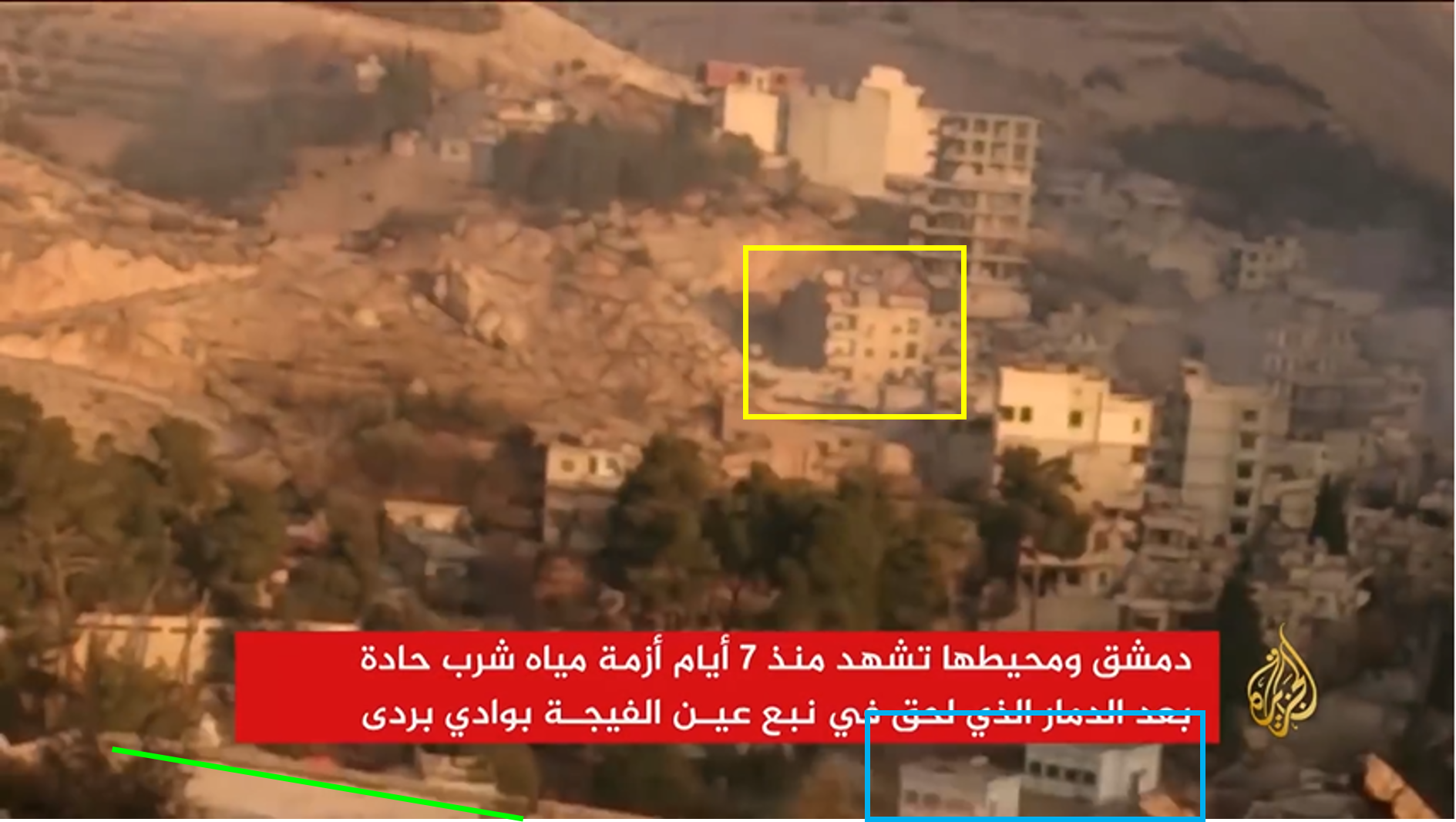 Geolocation of video – Still from video Geolocation of video – Image from Panoramio overlooking the spring structure Image of bomb before impact Image showing moment of impact: the splash appears between the buildings highlighted in blue in the geolocation and the spring structure on the lower left

It should be noted that this bomb appears to land to the south-east of the actual spring structure, between it and the two buildings highlighted in blue. This puts the impact point within 80 meters of the main spring structure, and makes it a likely culprit for the crater seen in the 29/12/2016 satellite imagery.

The video also shows a second bomb falling, and impacting on the spring structure itself. Still from the video showing the second bomb Still from the video showing the second bomb (yellow circle) about to impact the spring structure, as well as splash from the first bomb (orange square) 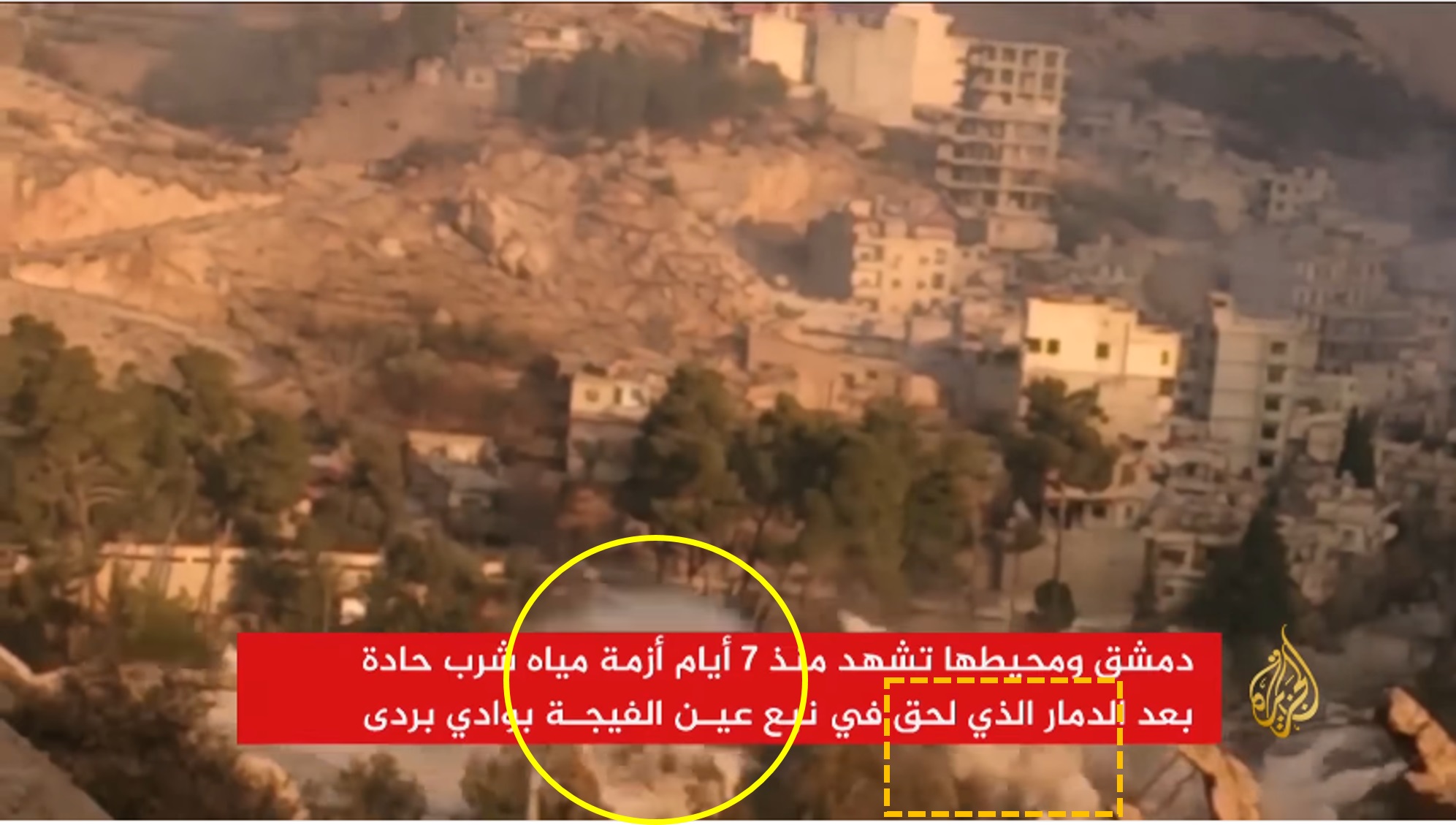 Still from the video showing two distinct splashes from the two bombs. The pressure wave from the second bomb is clearly visible in the upper section of the yellow circle

This second bomb appears to be the most likely cause of the major damage we see to the spring structure. We can see from the video that it impacts the southern end of the structure, which lines up with a hole in the roof we can see on the satellite imagery. Depending on the kind of the fuse the bomb was armed with, it probably detonated inside the structure, resulting in the large damage to the centre section of the roof.

Allegations of demolition by Rebels

There is also a video posted on a private Facebook account by a rebel calling himself Abu Talib Barada. It appears to show the rebels preparing the Damascus water tunnel for demolition in case the regime attempts to take control of the Baradi Wadi. This video was uploaded on 25th December at 1151 UTC, although it could have been filmed earlier. The description reads:

“Let everyone know that the lives of the hypocrites in Damascus are not more precious than the life of a #child from #Barda_Valley. One of the water tunnels for #Ain_al-Fijah which heads to the capital #The_occupied_Damascus, is currently being #mined by the rebels, in the event that the mercenary #Qays_Farwa commander of the barbaric campaign on the villages of #Barda_Valley continues attacking, all the #main tunnels will be detonated, and will never return.” Screenshot of video post. Note the time and date posted

There is also an image which is being disseminated by pro-regime activists claiming to show Abu boasting about bombing the structure:

Considering Abu does not seem shy about showing preparations to blow the water tunnel to Damascus, it seems likely that if the rebels did demolish the Damascus tunnel then Abu would post about it. However, examination of his Facebook feed shows no indication that the rebels carried out their contingency plan. This narrative also excludes another post from Abu on the 23rd December at 1921, which explicitly blames the contamination of the water on bombing by the regime.  This directly contradicts the posts which have been cherry picked by pro-regime activists. Screenshot showing Abu blaming the regime for the contamination of the water.

“After what #Barda_Valley areas and villages have experienced of frequent events since yesterday noon, and military escalation by Nusayris gang and the militias supporting it, from The Devil’s party [Hezbollah] and monstrous [rough translation] committees represented by bombing the villages of the valley using air force and helicopters and all kinds of heavy and light weapons and the targeting of all medical and vital points in the region and #Ain_al-Fijah campus directly, which led to the contamination of water after #Mazut_and_Pump_Oil intermixed with the water that feeds #Damascus city [emphasis added], and was the cause of putting the spring out of commission and stop pumping water”

Examining the open source media surrounding this incident we can reach several conclusions:

Given the regime bombing in close proximity to the spring, as well as video evidence of a bomb impacting the spring structure itself, the most likely scenario is that the regime was responsible for the damage to the spring structure. This bombing is also probably the most likely reason for diesel entering the water supply, whether from a damaged fuel tank, generator, or otherwise. If the rebels wished to cut the water supply they could simply block or divert the spring, as they had done in the past. Preparing one of the tunnels for demolition appears to be an act of deterrence, giving the rebels a “nuclear option” in case of regime attack. Destroying the spring structure itself removes any leverage they have and would give the regime a reason to launch an offensive to take the Barada Wadi. Considering reports of heavy fighting around Barada Wadi, the damage to the Fijeh Springs indeed appears to have sparked a regime offensive on this pocket.

Many thanks to  @wasc_algonquin and @QalaatAlMudiq for their help with this article.