Earlier this year, we examined attacks on Yemen’s water infrastructure by several parties to the conflict. An attack in January 2016 on the water desalination plant (Wikimapia) north of Al-Mocha was central to that open source survey. Earlier this month, new reports emerged that the water desalination plant was targeted once again by alleged airstrikes by the Saudi-led Coalition. This article reviews the situation at the plant in light of those new allegations.

The desalination plant is located north of Al-Mocha (Arabic: المخا) on the coast of the Taʿizz Governorate, and privately owned by the Yemen Company for Desalination (Arabic: الشركة اليمنية للتحلية). The plant was seemingly targeted on January 8, 2016. While the attack was not caught on tape, the damage done the plant was visible on several photos and video posted on social media. These photos could indeed be located to the location of the desalination plant. A full open source survey of that attack can be found here.

In the first week of October 2016, claims were made on Twitter [archived] that a Saudi-led Coalition airstrike had targeted the desalination plant, destroying it completely. According to a correspondent of Yemen Today TV, the plant was targeted by seven airstrikes. A few days later, photos were published on social media which allegedly showed the destruction by these airstrikes [archived]. One of the photos appears to show the storage rooms next to the water tanks on the premises of the desalination plant. The first tweet that refers to the incident appears to have been sent into the world on October 1, 2016.

Over a month later, on November 3, the Taiz Military Council tweeted [archived] that the Coalition had struck “weapons storage” near the desalination plant. This Military Council was formed in January this year “to reinforce the efforts of resistance fighters against Houthi rebels”, according to Dubai Eye [archived].

The attack was also reported by Yemen Today TV, Al Masirah, and Fajattan on November 3, as well as the the Syrian Arab News Agency on November 4. Three persons were killed and another nine wounded, according to these reports. Some mentioned “martyrs” and injuries due to the airstrikes. Photos of alleged victims of the airstrikes were also posted on Facebook [archived]. Two people died and sixteen people were wounded, eight of which in critical condition, according to Sahafah Yemen. It can be established with certainty that the footage shows the Al-Mocha water desalination plant in the Taʿizz Governorate. This specific compound as well as the surrounding territory is held by Houthi forces and groups aligned to the former Yemeni government. High resolution satellite imagery from TerraServer of October 28 and October 29 confirms significant damage at the plant. The water tanks appear to be intact, while the surrounding warehouses have been destroyed.

Google Earth also has satellite imagery available for May 26, 2016, which shows the damage likely done by the January 8 attack. 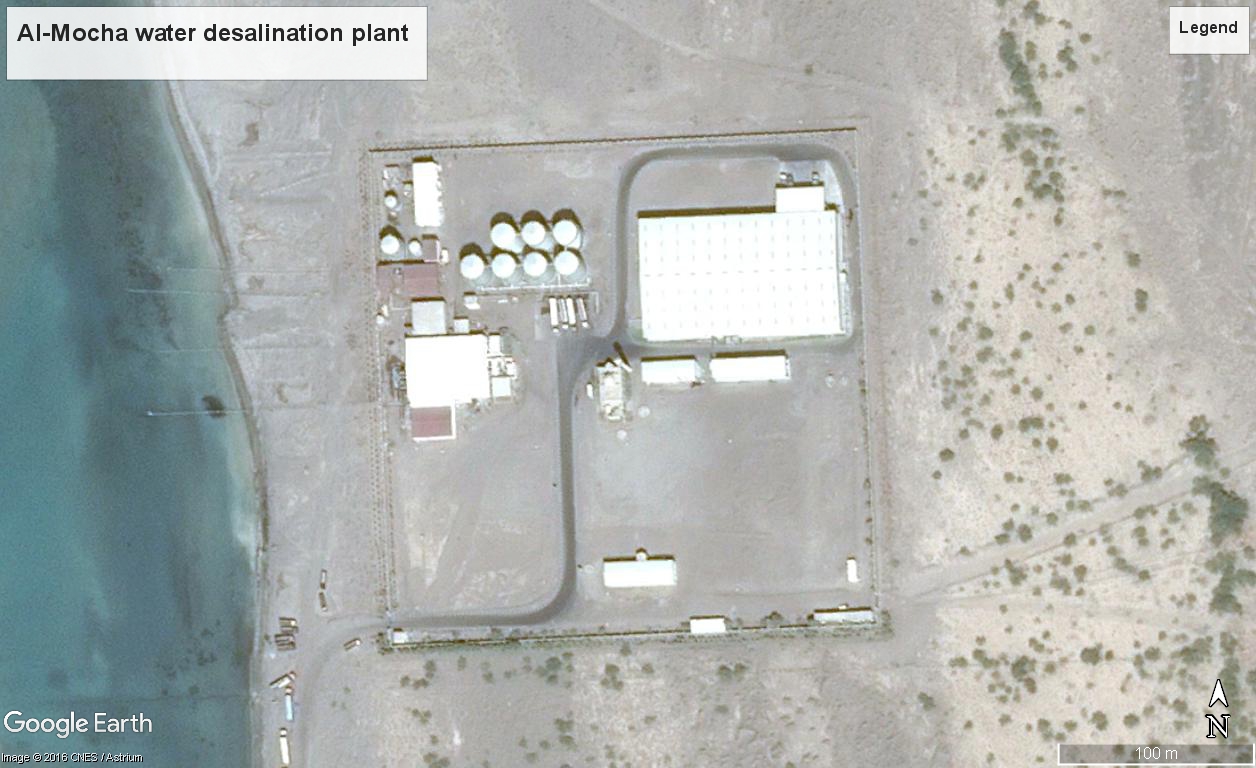 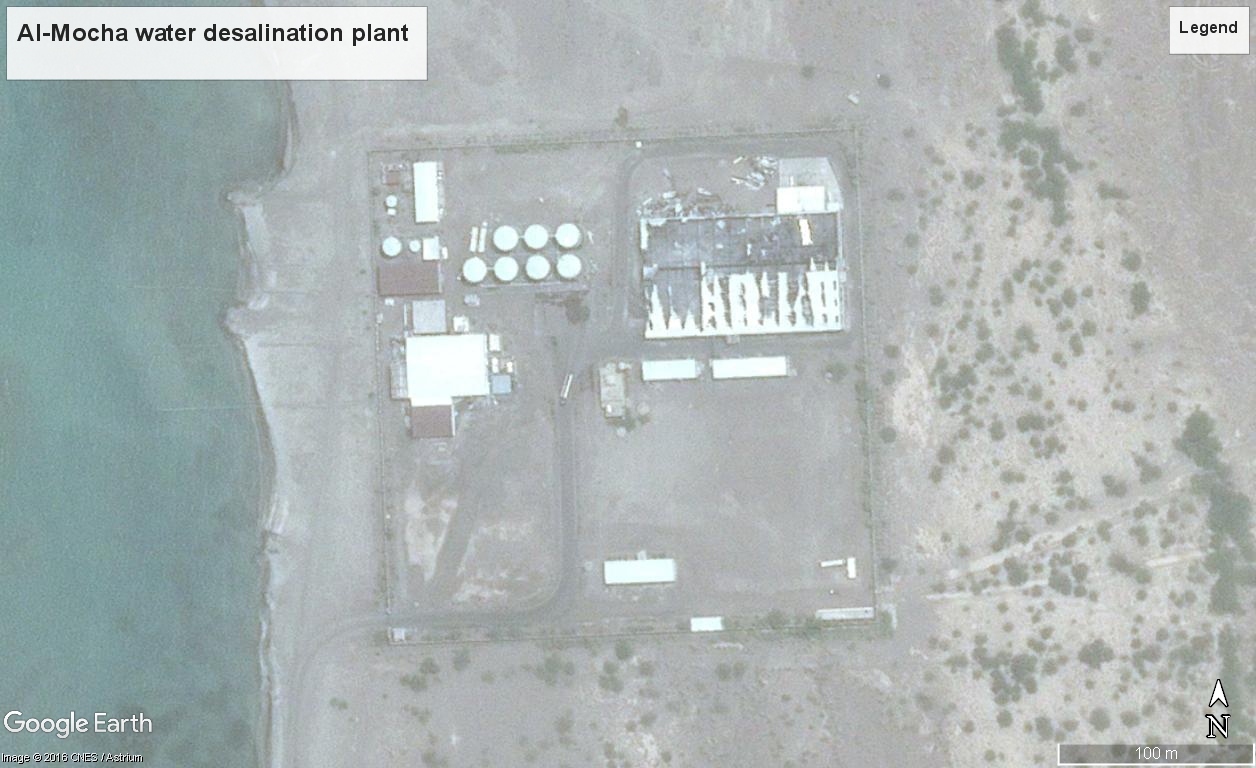 Unfortunately, the earliest satellite imagery available before the attack is from November 2013, and the above mentioned imagery is the most recent available imagery. Thus, the visible damage could be from the January 8 alleged attack as well as the October 1 alleged attack. Given the damage seen at the warehouses, it is likely that this is imagery shows damage sustained from to the October 1 attack. A still from the Al-Montasaf news bulletin uploaded to YouTube on November 7, 2016.

The exterior footage shown in the news bulletin from Al-Montasaf can indeed be geolocated to the compound of the desalination plant. The footage of the interior of one or more of the warehouses on the premises could not be corroborated due to lack of pre-airstrike footage.

Yemen has suffered a devastating war that has raged for over a year now, since Houthi rebels ousted the government from Sana’a. Since then, Saudi Arabian forces have come to the aid of this government, forming a coalition with the United Arab Emirates (UAE), Bahrain, Qatar, Kuwait, Jordan, Egypt, Morocco, Pakistan, and Sudan. Saudi officials have stated they aim to restore the Yemeni government, said to be an ally of the United States (US) in the fight against Al-Qaida in the Arabian Peninsula (AQAP) as well as the so-called Islamic State (IS). The Saudi-led Coalition started bombing Yemen since March 2015, and has come under fierce critique for lack of discrimination and proportionality in conducting their airstrikes. Houthi rebels have also been accused of war crimes.

Satellite imagery of October 28, 2016, confirms significant damage to structures on the premises of the Al-Mocha water desalination plant. It cannot be established with certainty that this damage is due to the reported airstrike(s) of January 2016, or of the reported airstrikes on October 1, 2016. The latter has been reported by opposing factions in Yemen’s war, though one claimed the warehouses were used as weapons storage instead of water-related purposes. This cannot be confirmed nor denied. Footage of another (set of) airstrike(s) on November 4 can be geolocated to the Al-Mocha desalination plant. It is not clear to what extent the water tanks have been damaged. In January this year, cracks were visible, but neither the October 1 nor the November 4 footage gives a clear view of the desalination plant.

Unfortunately, the alleged attack on the Mocha desalinisation plant is not an isolated in Yemen’s civil war. Earlier, we published a non-exhaustive list of attacks on water infrastructure that occurred in 2015. Water plays a vital role in war-torn Yemen. A staggering 13 million citizens — around half of Yemen’s population —struggle daily to find or buy enough clean water to drink or grow food, The Guardian reported in 2015. Bellingcat will keep on monitoring the Al-Mocha water desalination plant and will update accordingly if new incidents are reported or changes can be noticed through open sources.

The author can be contacted via christiaantriebert@bellingcat.com.

Update February 10, 2017: Google Earth imagery of before and after a bombing has been added to the article.