By Brendan Clifford* and Christiaan Triebert**

The conflict in Yemen has caused immense suffering, exacerbating the longstanding water crisis in the country. For nearly a year, Yemen’s water infrastructure appears to have been under deliberate attack. This open source intelligence (OSINT) investigation looks into the latest attack (allegedly January 8, 2016) on a water facility, the seawater desalinisation plant north of Mocha, 2016, and places this attack in a wider context of attacks on illegitimate targets, specifically water infrastructure. 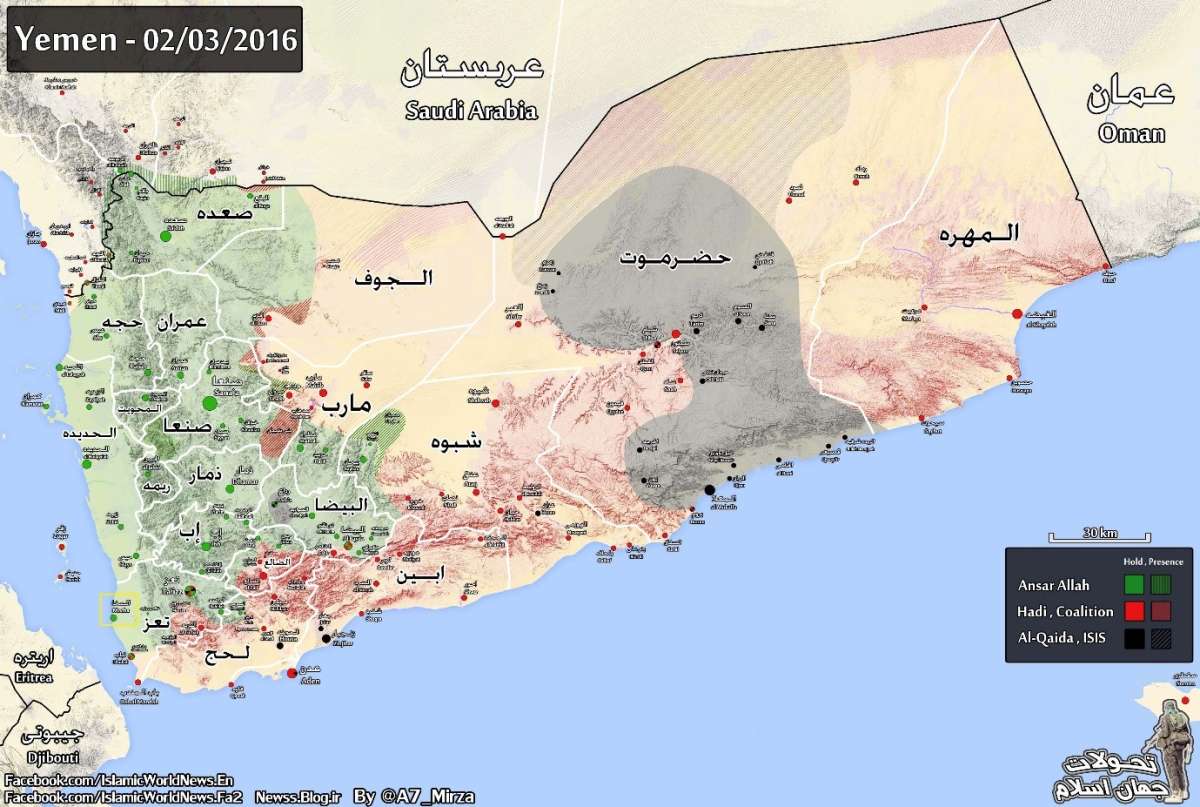 Impression of territorial control in Yemen as of February 3, 2016.

Yemen has been at war with itself for nearly a year, since Houthi (officially called Anṣār Allāh) rebels ousted the government from Sana’a. Since then, Saudi Arabian forces have come to the aid of this government, forming a coalition with the United Arab Emirates, Bahrain, Qatar, Kuwait, Jordan, Egypt, Morocco, Pakistan, and Sudan. The Saudis have stated they want to restore the Yemeni government, an ally of the United States (US) in the fight against al-Qaida in the Arabian Peninsula (AQAP).

The Saudi-led coalition started bombing Yemen since March 2015 with a large number of airstrikes, of which the United Nations (UN) believes 119 might have been in contravention of international law. The Houthi rebels are also accused of war crimes. Both parties are active in Taʿizz province.

In the second week of January 2016, photos started circulating on Facebook and Twitter of what allegedly showed the destruction by an Saudi-led coalition airstrike on a seawater desalination plant near Mocha (Arabic: المخا‎ al-Mukhā) on the coast of the Taʿizz Governorate. 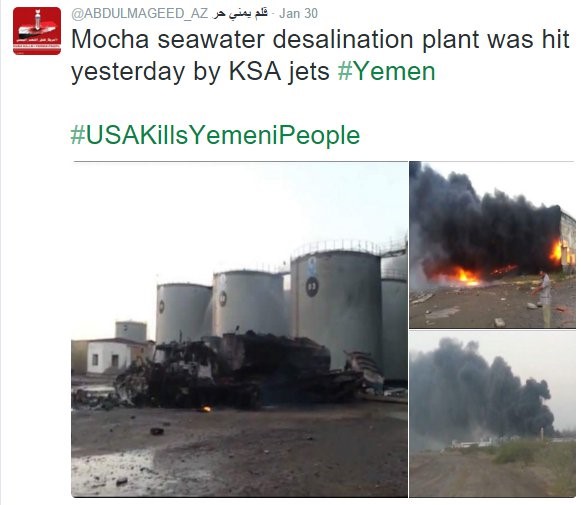 Photos spread on Twitter, allegedly showing the aftermath of a Saudi-led coalition airstrike on the Mocha seawater desalination plant.

This article tries to confirm the validity of the images by confirming there is a desalination plant, and that it is near Mocha, Yemen. Furthermore, it investigates whether or not the plant was functioning before it was attacked and places the attack in the wider perspective of Yemen’s troubled water situation.

Although the many reports on social media speaking seemingly referring to different dates, January 8, 2016, is the first time the attack on the desalination plant was mentioned in this this Facebook post. Two days later, a 79 second YouTube video, was uploaded by the pro-Houthi media outlet 21sept, a name that refers to the Houthi takeover in Yemen, known as the September 21 Revolution. The video’s description speaks of severe damage to the desalination plant and says the airstrike left several ‘martyrs’ dead, including one truck driver.

The following photo on the YCD website clearly shows that it is the same facility as in the video. Above: Photo from the YCD website. Below: Still from the 21sept video.

Water desalination plants are usually coastal, so one could scan the west coast of Yemen north and south of Mocha, but the facility is already added as a location on Wikimapia. Overview image of the location of the Mocha desalination plant.

Corroborating and mapping the key features of the stills of the YouTube video confirms another time that the video does indeed show the water desalination plant near Mocha. 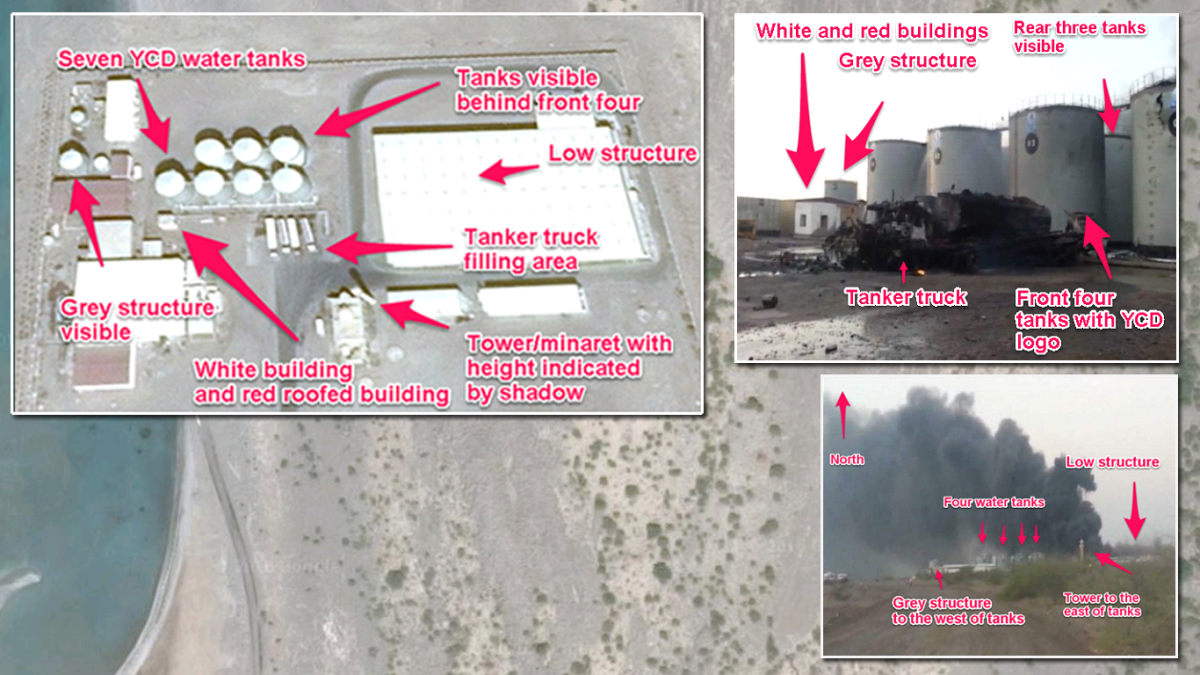 Overview of the Mocha desalination plant with still from the 21sept video.

Was the water desalination plant functioning when it was destroyed?

It is hard to tell whether or not the desalination plant was producing water at the time it was destroyed. If the plant was deliberately targeted, that suggests it was being used for something. The Yemen Post writes that one person was killed and four were wounded in the attack, but it does not say if they were working at the plant. The description of the sept21.com video speaks of several ‘martyrs’.

In the video, tanks 02 and 04 can be seen leaking. Tank 02 has water coming from a perforation high up, suggesting it was nearly full when it was damaged. Tank 04 has some small leaks as well as two large ruptures, which may have been caused by the weight of water pushing out of the damaged tank. Furthermore, the ground is wet, possibly from water stored in the tanks. 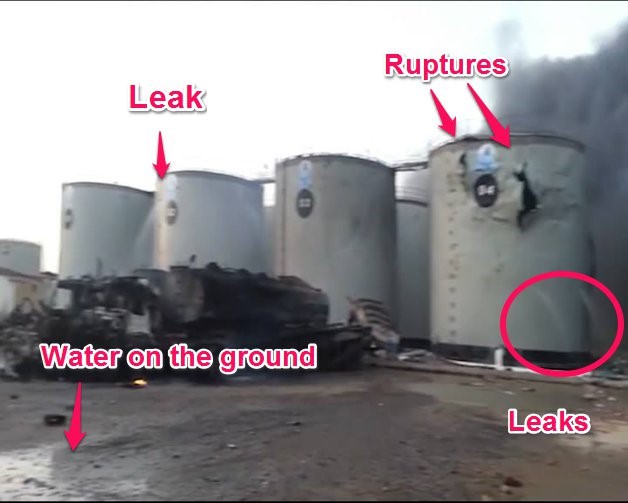 Still from the video shows that liquid pours out of tank 02 and tank 04.

None of this proves the plant was functioning on January 8, 2016. However it does suggest at least two of the seven main tanks were full. The YCD website, the satellite imagery and the post-attack photos show these tanks were used to contain desalinated water destined for the tanker trucks. The images and footage also suggest at least tanks 02 and 04 were nearly completely full of liquid just before the attack.

Using two website dating sites, Timetravel and Carbon Dating the Web, the last edit to the YCD website was made January 11, 2016, three days after the attack. However, we have not been able to find this last edit on either the Arabic or the English versions. Regardless, it shows someone with the ability to edit the website changed something just after the attack. Whatever the user changed or added, it shows there were people involved in the YCD site paying attention to their plant, either because it was running up until the attack, or that it had relatively recently stopped producing water (as suggested by the presence of liquid in the tanks).

There is a ‘recent news’ section on the YCD website. It has news from between January and March, but does not specify which year. It is most likely of 2015, because the Yemen Times ran a story in December 2014 when the plant was still just a plan.

It seems likely that the plant was being used up until it was destroyed. It is alleged several people were at the facility, possibly collecting water, when it was struck and at least two of the seven tanks were full of water.

Who is to blame for the destruction of the water desalination plant north of Mocha? Most Twitter users are blaming the Saudi-led coalition. Also used is the hashtag ‘#USAkillsyemenipeople’. The US, as well as the United Kingdom (UK), are selling weapons to the KSA and are providing advisors to help increase targeting precision. The KSA definitely has the capacity to destroy the plant. It has been dropping ordnance on Yemen since March 2015.

Does the KSA have a motive for attacking the plant? If the plant was still supplying the contested held city of Taʿizz and parts of Houthi-held territory, then perhaps its destruction would force the Houthis to move. Alternately, the plant could have been used as a firing position by Houthis, making it a military target, as the KSA has claimed before when it targeted an alleged water facility in Yemen (see the bullet points listed below on earlier attacks on water infrastructure). However there is no hard evidence that Saudi jets or any other member of the Saudi-led coalition responsible for the attacks. Although there is evidence that the damage was caused by an explosive (damage to tanks 02 and 04, various debris scattered about visible in the video), this does not attribute blame.

The Taʿizz coast is quite barren. There is Mocha, a few ports, and this desalination facility, which is quite easily identifiable – as demonstrated in this article. If the plant was being used as a position from which to fire on Saudi or Yemeni government forces that would make it a legitimate target. Otherwise, under Protocol I of the Geneva Convention, to which Saudi Arabia has been a signatory since 1987, the plant is an illegitimate target.

An alternate perpetrator might be among the wide variety of groups currently fighting the Houthis for control Salafist of Taʿizz city. For example, a video released in early January 2016 claims to show Al-Qaeda in the Arabian Peninsula (AQAP) fighters in Taʿizz engaging with Houthi forces. The footage shows AQAP have truck-mounted recoilless rifles which could possibly have caused the damage to the plant. Other groups, such as the pro-Hadi Security Forces, Islah fighters (Yemeni Congregation for Reform), or Popular Resistance Committees, are also actively fighting the Houthis in Taʿizz. These groups could have aimed to destroy the plant for similar reasons hypothesised above: to weaken the Houthi position by thirst. On the other hand, it seems that the desalinisation plant also provided water for pro-Hadi controlled areas.

Unfortunately, the attack on the Mocha desalinisation plant is not an isolated in Yemen’s civil war. This a non-exhaustive list of attacks on water infrastructure that occurred in 2015. We have tried to use OSINT to find and verify as much as possible, but we have not been able to verify all of them. 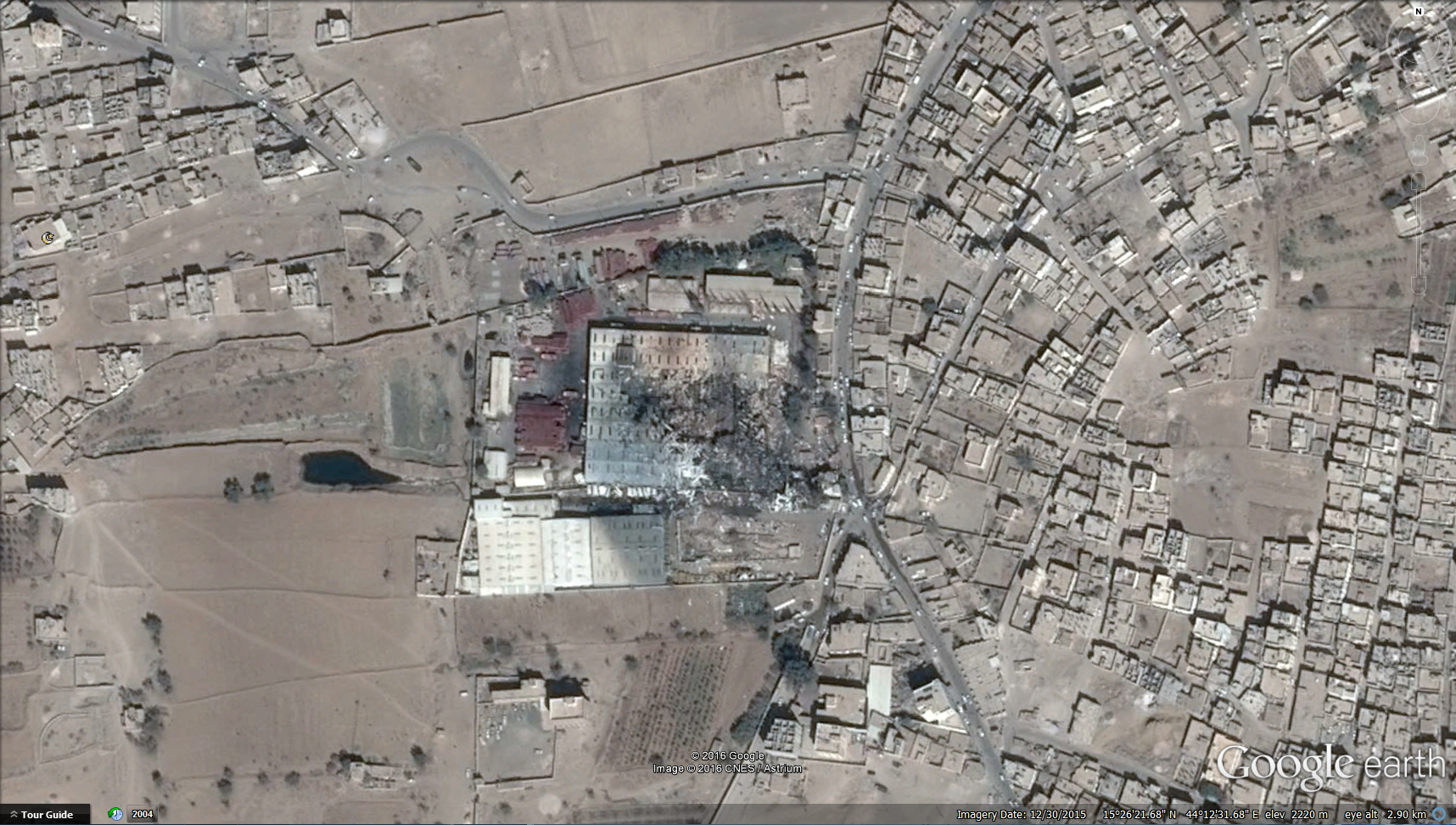 At present, it is evident that the Mocha sea water desalination plant was attacked, most likely on January 8, 2016. However, we are not able to prove who destroyed the plant. Whoever did it has committed a grievous crime. Taʿizz is water starved and the plant was supposed to be able to supply its population with clean water. Now it is badly damaged if not totally destroyed. This would be terrible in peace time but it is catastrophic given the conditions the citizens of Taʿizz are living under.

The images circulating online show the aftermath of an attack on the YCD desalination plant north of Mocha. This OSINT investigation has shown that this attack likely took place on January 8, 2016. The plant was probably still functioning when it was attacked, or at the very least had liquid in it – most probably water the citizens of Taʿizz and Mocha could have used.

Water plays a vital role in war-torn Yemen. A staggering 13 million citizens struggles daily to find or buy enough clean water to drink or grow food. That is around half of Yemen’s population. If the shortages are not decreased any time soon, there is a chance of large-scale epidemics, according to the World Health Organisation’s head of mission in Yemen.

A report in the pro-government newspaper Al-Thawra estimated that around 70-80% of conflicts in Yemen’s rural areas are about water. Yemen has a severe water deficit which continues to grow annually. There are many factors contributing to this imbalance, including natural water scarcity, increasing demand, poor governance, a dry climate, climate change, low efficiency, inadequate investment, poor use of land (khat) – and so forth. Bombs should be of least concern.

* Brendan Clifford is a graduate student at King’s College London reading International Relations. He has a degree in History from the University of Cambridge. He can be contacted by e-mail: brendanjamesclifford@gmail.com.

** Christiaan Triebert is a graduate student at King’s College London reading Conflict, Security and Development. He two degrees from the University of Groningen in International Relations, and in Philosophy. He can be contacted by e-mail or Twitter: christiaan.triebert@gmail.com, @tbrtc.

Update 2 February 2019: An earlier version of this article said that the alleged air strike on the Coca Cola factory in Sanaa took place on 30 December 2015, as was reported by several media outlets. Closer inspection by Haley Willis revealed that the strike was already reported on social media around 9 PM local time on 29 December 2015, after which the article was updated.