The New Syrian Army: America's "Tip of the Spear" Against ISIS in the Syrian Desert

The media has reported extensively on the US support of rebel groups against ISIS in Northern Aleppo; however, the extent of US involvement with FSA groups that operate in the Syrian desert is not as well known to the public. There are two key American/Jordanian backed rebel groups operating in the Syrian Desert: the “Forces of the Martyr Ahmad al-Abdo” (Arabic: قوات الشهيد احمد العبده) and the “New Syrian Army” (Arabic: جيش سوريا الجديد). Both of these groups enjoy American and Jordanian support but the extent for each varies greatly. Ahmad al-Abdo, while backed by the US, is still a run of the mill FSA group. New Syrian Army (NSyA) on the other hand is more of a special forces unit than a conventional FSA group.

The relationship between the New Syrian Army and the US is even closer than the relationship between the US and the YPG. While relatively small compared to most Syrian rebel groups, the New Syrian Army is one of the best equipped and trained FSA groups. Jordanian special forces are also likely embedded with NSyA. Furthermore, NSyA has coordinated with the Iraqi government to secure portions of Iraqi territory along the Syria-Iraq border. In this article we will be investigating American and Jordanian support for the New Syrian Army. Understanding the extent of American support for this group can help us understand their relevance in the war against ISIS. The New Syrian Army first appeared on the scene on November, 2015 with the intended goal of removing ISIS from the Syrian Desert. Loosely affiliated with the mainstream rebel Authenticity and Development Front coalition, NSyA is trained and armed by the US and Jordan. Unusual for most groups in Syria, the NSyA runs very tight OPSEC. Very few of their fighters upload photos to Facebook and even fewer have these photos visible to the public. This is in stark contrast to US/Turkish backed rebels in N. Aleppo who routinely show off US supplied equipment on Facebook. In New Syrian Army’s videos, faces and vehicles are often blurred making open source weapon and vehicle identification a nonstarter. The background in their videos is often blurred out as well, essentially thwarting any geolocation attempts. Geolocation of footage in the Syrian or Jordanian desert is already challenging enough given the flat featureless nature of most of the terrain, but New Syrian Army’s OPSEC makes it borderline impossible at times. 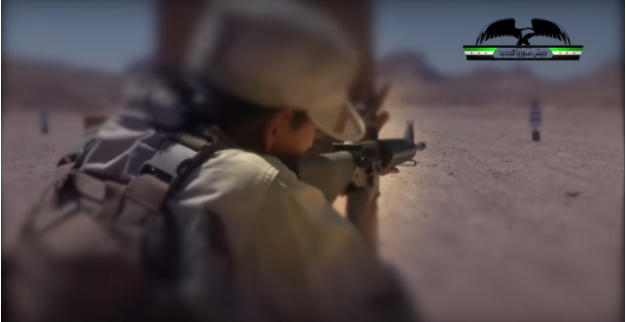 Even the tightest OPSEC programs have holes. We were able to successfully gain access to a variety of New Syrian Army photos on social media due to a few fighters failing to utilize proper privacy settings. These photos and postings give us a key insight to the level of cooperation between the New Syrian Army and the US/Jordan. The media has confirmed that Jordanian Special Forces are assisting Syrian rebels in their fight against ISIS. However, they haven’t discussed to what extent Jordan and the US (possibly the UK as well) are assisting the New Syrian Army. The photos we gathered reveal the extent of that support.

Starting with vehicles, the Jordanian Thalab Long Range Patrol Vehicle has been spotted with the New Syrian Army on two separate occasions. The Thalab LRPV is used by Jordanian Special Forces and is designed for long multi-day patrols in harsh terrain. A Thalab is rather expensive compared to the cheap Toyota Hilux pick-ups supplied to the New Syrian Army by the US. It’s possible that foreign special forces are operating this vehicle, the lack of footage of the Thalab in official New Syrian Army videos further supports this theory. 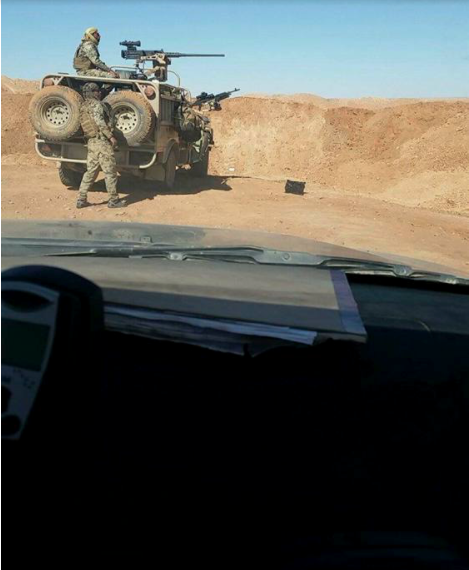 A different Thalab Patrol vehicle near al-Tanf Border Crossing, Syria in early March. It is possible that the vehicle is operated by foreign special forces.

The people operating the Thalab in the 2nd picture are wearing what appears to be Multicam camouflage fatigues. To date, we have not seen NSyA fighters wearing Multicam (they tend to wear US “Desert Camouflage Pattern”), although other US backed groups in Syria do wear Multicam. However, those Multicam wearing US backed groups operate in Northern Aleppo nowhere near the territory New Syrian Army operates in. While it is impossible to 100% confirm that these are foreign special forces operating the Thalab, it does highlight the close cooperation between the NSyA and the coalition.

Moving on to technicals, the New Syrian Army operates the same model of Toyota Hilux that the US supplied to Northern Aleppo FSA (see this article). NSyA has dozens of these technicals, most of which have M2 Browning .50cal machine guns mounted on the back. Other than Thalabs and technicals, one photo has emerged of a Humvee with a mounted Kornet ATGM near al-Tanf in Syria. It is unclear who is operating it from the picture, but some sources on Twitter claim that the US has given these Humvees to the NSyA. It is also possible that foreign special forces are operating the Humvee, as Humvees have not appeared in any official NSyA video releases. In either case, the presence of these vehicles highlights the close relationship that New Syrian Army has with the US and Jordan. A New Syrian Army patrol in late April, 2016 taking a break after a long drive on American supplied pick-up trucks Moving on to small arms, the New Syrian Army is very well equipped. Most US backed rebel groups in Syria seem to use a mix of American supplied weapons and local weaponry. NSyA bucks this trend and almost exclusively uses US supplied weapons. M16A2s (with and without ACOGs), Mk 14 EBRs, M240Bs, M249s, and M2HB Brownings are routinely seen with the group at a higher rate than even Northern Aleppo FSA groups. The New Syrian Army take a photo of some of their weapons on May 17th in an unknown location (note the American ammunition, plate carriers, trucks and camouflage fatigues) 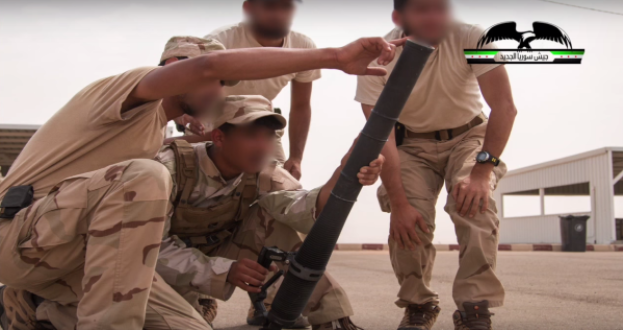 An American supplied M224 mortar with the New Syrian Army 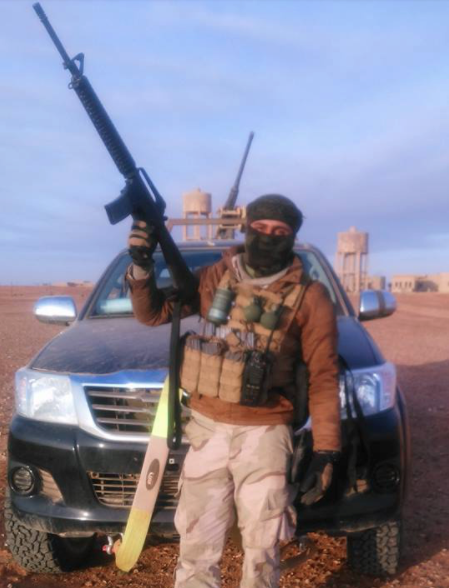 A M1100 Mortar trailer with the New Syrian Army

The coalition support for the New Syrian Army does not stop there. Unlike the Northern Aleppo FSA, the US provides close air support to the New Syrian Army. In a situation similar to the support given to the SDF/YPG in northeastern Syria, embedded special forces likely direct close air support for the NSyA. The US has also stationed M142 rocket artillery in Jordan to support the NSyA, these rocket strikes are likely directed by on the ground special forces embedded with the NSyA. There are unconfirmed reports that the US provided helicopter gunship support for a New Syrian Army raid on an ISIS held oil field near al-Bukamal. We were unable to independently verify this claim, but the source is generally quite reliable. On the other hand, we do have evidence that the US has used helicopters on May 7th to evacuate wounded New Syrian Army soldiers from their al-Tanf headquarters to a hospital in Jordan after a major ISIS attack.

On May, 7th an ISIS SVBIED detonated in NSyA’s Tanf camp leading to a significant number of casualties. A now deleted post on social media on May, 8th by a New Syrian Army fighter claimed that “A large number of our forces were badly injured by an ISIS SVBIED that detonated in our camp and were flown to Jordan on an American helicopter.” US helicopter support has not been provided to any other group in Syria to our knowledge. In a recent Washington Post article, a NSyA commander claimed that they were unable to stop the May, 7th ISIS SVBIED due to a lack of ATGMs. We have obtained video and photo evidence that the New Syrian Army may be receiving ATGMs from an unknown foreign backer in response to that attack. This evidence may confirm prior unconfirmed claims that foreign backers will supply ATGMs to the New Syrian Army.