Adam Rawnsley is a Philadelphia-based reporter covering technology and national security. He co-authors FP’s Situation Report newsletter and has written for The Daily Beast, Wired, and War Is Boring. You can follow him on Twitter at @arawnsley.

Iran has sent another model of drone to northern Syria, according to imagery posted on social media in the latter half of 2015. Pictures of wreckage taken inside Syria indicate that Turkey shot down the unmanned aerial vehicle (UAV) in a May border incident in which Turkish officials claimed the aircraft violated Turkish airspace. The drone also appeared over the southern suburbs of Aleppo in October as a Syrian offensive, backed by Iranian ground troops and Russian jets, was underway in the province, according to a photo posted to Facebook.

The aircraft in the imagery is an Iranian tactical reconnaissance drone with a V-tail and rotary engine in a pusher configuration, resembling a smaller version of the Islamic Revolutionary Guard Corp – Aerospace Force’s (IRGC-AF) purported medium altitude long endurance Shahed-129 drone. In contrast to the boastful publicity Iran often lavishes on the drones it produces, Iranian officials have revealed relatively little about the drone, leaving few clues about its specifications or even its name.

The pictures from Syria match an Iranian drone seen in photographs of a crash in Saravan, Iran in February 2014. Iranian television has broadcast footage of UAVs which appear to be the same or slight variants of the model seen in Syria, but photographs from the Saravan crash remain the best available source of reference imagery for identifying the drone. 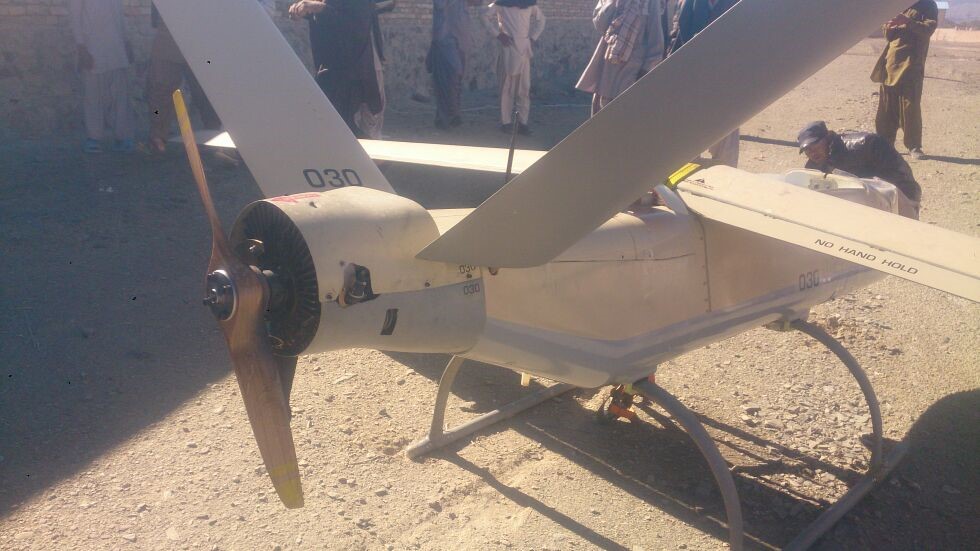 The “Shahed-123,” as an Iranian military forum labeled it, after a February 2014 crash in Saravan, Iran.

Iranian military forum posters have referred to the Saravan drone as the “Shahed-123,” a plausible designation, but drawing firm conclusions about the drone’s name or capabilities is difficult in absence of further information from Iranian officials.

On May 16, a Turkish F-16 flying out of Incirlik Air Base shot down an aircraft it accused of violating Turkish airspace near the Cilvegozu border crossing with Syria. Turkey’s Prime Minister Ahmet Davutoğlu and Defense Minister İsmet Yılmaz claimed it was a Syrian helicopter. However, a subsequent statement by the Turkish Armed Forces referred only generally to the downing of “a Syrian aircraft.” Syria rejected the assertions of a lost helicopter, claiming instead that it had lost a drone in the incident.

Pictures of the wreckage posted on Twitter and in news outlets support Syria’s claim that the aircraft shot down was a drone, given the lack of a recovered pilot, alive or deceased, and wreckage inconsistent with a helicopter.

The wreckage and Syria’s contention that it lost a drone in the incident further narrows the pool of candidates for the aircraft, as Syria’s UAV fleet is comprised mostly of Iranian drones, with the notable exception of Soviet-era Tu-143 Reys. Two photographs taken in Syria where the wreckage of the aircraft landed reveal an engine cowling, rotary engine, V-tail stabs and a landing skid that are consistent with the components seen on the “Shahed-123” drone which crashed in Saravan, Iran.

Two pictures taken at the scene of the crash in Syria show a metal cowling atop a rotary engine from two different angles — one showing the cowling as it appears from the rear of the aircraft and the other lying on its side. 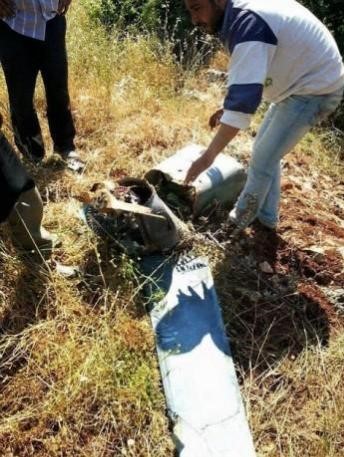 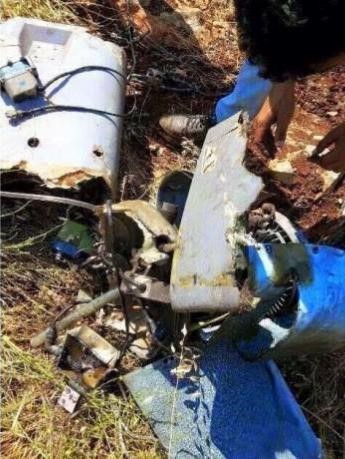 Zooming in on the second picture and turning it upside down offers a clearer view of the cowling as it would appear looking at the starboard side of the aircraft. A number of similarities are apparent when compared to the engine cowling on the Saravan “Shahed-123.”

The cowling in both the Syria and Saravan pictures have the same shape with an inlet that rises above the fuselage to allow air to reach the engine. Each has a seam that runs along the side of the engine, splitting the covering into top and bottom pieces held together by bolts.

The cowlings on both aircraft also have serial numbers in roughly the same position. The Saravan Shahed has a three digit serial number painted both above and below the seam where it meets the aircraft’s rear fuselage. In the Syria picture, the lower half of the cowling is missing, but the number 8 is visible. The number is painted above the seam in approximately the same place as the Saravan imagery, albeit to the left of a bolt hole rather than above it. The area to the left of the number is slightly discolored, suggesting scuffs or scratch marks that may explain the single vs. triple digit discrepancy in serial numbers seen in the two images.

Both the aircraft wreckage in Syria and the Saravan aircraft show a rotary engine in a pusher configuration that is consistent with another apparent source of “Shahed-123” reference imagery: a November 2014 Iranian TV program highlighting Islamic Revolutionary Guard Corps annual military technological achievements. The broadcast shows workers assembling a UAV, with an upsweep on the rear fuselage, a two-tone paint scheme and yellow prongs for attaching V-tail stabs that are all consistent with a “Shahed-123.”

Note: Saravan image is a mirror reverse of the original for ease of comparison

The November 2014 program shows workers testing out a rotary engine and attaching it to the rear fuselage of the UAV in a pusher configuration.

The two photos of the Syria wreckage where the engine is visible also show an elongated rectangular plank lying at a roughly 45-degree angle relative to the rear fuselage fragment. The shape and placement of the object is consistent with a V-tail stab that may have broken off on impact with the ground.

Another picture from the scene of the crash in Syria shows men carting away pieces of the aircraft wreckage, including, as some noted on Twitter at the time of the crash, curved piece of metal. The size and shape of the object is consistent with the curved struts on the landing skids of the Saravan “Shahed-123.” 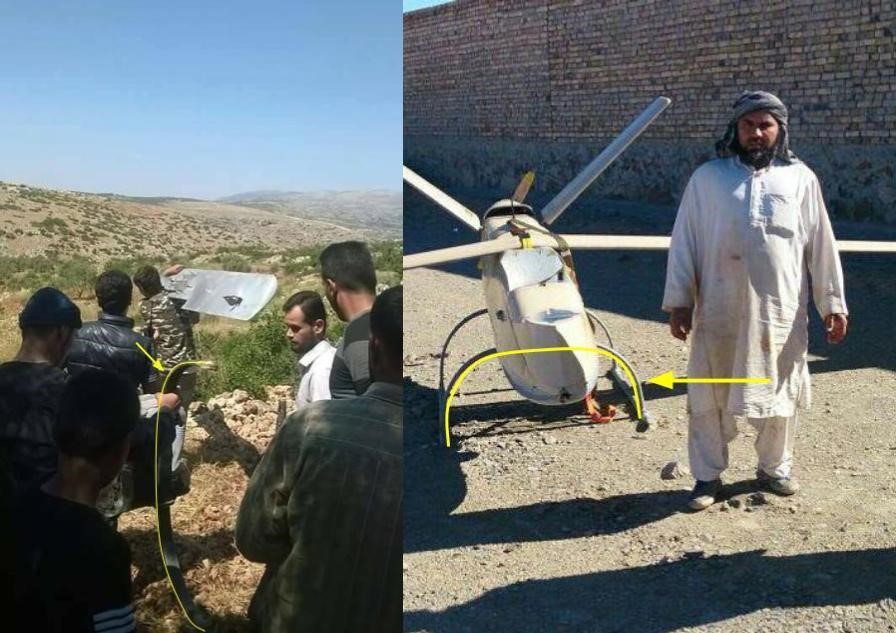 Five months after the incident along the Turkish Syrian border, Syrian opposition new outlet Halab Today TV published an image on its Facebook page along with a description saying the picture showed a “drone that belongs to the regime and its allies in the sky of the southern side of Aleppo suburbs.” The drone in the Facebook picture matches the “Shahed-123,” with the same metal landing skids, V-tail and general shape seen in the Saravan imagery. Designation and the Shahed Family of Drones

Some evidence supports the claim offered by Iranian military forum posters that Iran has designated the drone seen in Saravan and, by extension, Syria as the “Shahed-123,” placing the aircraft within Iran’s better-known Shahed family of drones.

First, the name matches the 12X format of Iran’s Shahed family of UAVs, which is comprised of three officially-designated members. The Shahed-129 is the most famous of the family, which Iran claims is capable of firing Sadid air-to-ground missiles. Iranian media has also acknowledged two other Shahed UAVs: the Shahed-121 and Shahed-125.

As Oryx noted in an inventory of Iranian weapons, Iranian media aired video of the Shahed-125, which resembles the U.S. RQ-7 Shadow drone, at an August 2014 defense exhibition in Iran. Confirmed imagery of the Shahed-121, despite IRGC-AF chief Brigadier General Amir Ali Hajizadeh claiming its presence the “Towards Jerusalem” exercise in November 2015, is not yet evident. As if to emphasize the Shahed-125’s aspirations, the image on the poster behind the drone itself is of an American RQ-7 Shadow.

Second, a photograph posted to an Iranian military forum suggests that Iran produced a drone with the name “Shahed-123.” In 2010, a member of the military.ir forum posted a picture of a chart titled “UAV manufacturing” purportedly taken at an Iranian aviation museum showing production numbers for different models of Iranian military UAVs in the Iranian calendar years 1384 and 1385 (corresponding to March 2005 through March 2007). Among the models listed are a “Shahed-123,” three of which were produced as of March 2007 according to the chart. Until firmer evidence linking a name to images of the UAV appear, the “Shahed-123” designation remains speculative.

Other Sightings of “Shahed-123”-like UAVs in Iranian Media

Iranian television has run footage of a number of UAVs since 2012 that look similar to the “Shahed-123” but the limited, often blurry and distant footage combined with Iran’s generally murky drone nomenclature makes it difficult to say whether they represent slight variants of the “Shahed-123” or entirely different, as-yet unidentified models.

Early July, 2012: Iranian television teases video of a number of UAVs which Iran hasn’t yet been officially rolled out, including the Yasir and the Shahed-129. Two drones similar to the “Shahed-123” are visible in the program, one with landing skids and another model which resembles a “Shahed-123” with tricycle landing gear instead of metal skids. [Photos via Uskowi On Iran blog]

March 11, 2013: The Aviationist runs a story on a photograph reportedly showing IRGC troops placing an unidentified drone fished out of the waters near Jask, home to an Islamic Republic of Iran Navy base, onto the back of a pickup truck. Seaweed and mud obscure much of the UAV, but the size, V-tail stabs, metal landing skids and engine in a pusher configuration all point to a “Shahed-123.” May 11, 2014: The IRGC-AF holds an exhibition attended by Supreme Leader Ayatollah Ali Khamenei, showing off a number of the service’s aircraft and equipment, including Iran’s alleged copy of the U.S. RQ-170 drone. Iranian news sites report that the Shahed-121 and Shahed-125 drones were present at the exhibition. Iranian military forum members also notice a handful of UAVs similar to the “Shahed-123” in the background of footage from the exhibition. November 2014: The aforementioned November 2014 Iranian TV program featuring a “Shahed-123” under construction also runs footage of two other, similar UAVs featuring tricycle landing gears instead of metal skids. The first one, painted with the colors of the Iranian flag, is shown with a piece of fairing covering the junction between the wings and fuselage and a second appears without the fairing but sporting a more pointed nose. September 2015: Iranian television runs a documentary on Iranian aerospace technologies, which includes a shot of UAV looking much like the Saravan “Shahed-123” shortly after taking off. The presence of an apparent launch rail in the background as the drone becomes airborne suggests that it may be capable of taking off from a mobile launcher, either by catapult or or jet-assisted take off, as a number of other Iranian drones are.