What OSINT Tells Us About the Bakery Bombing 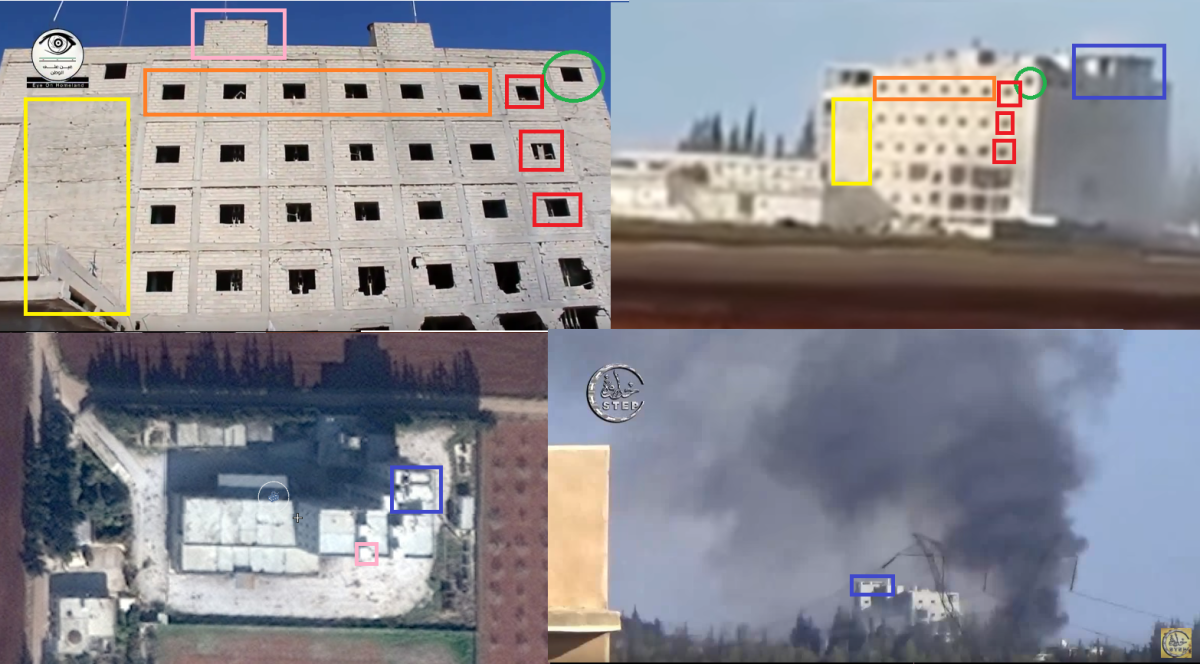 Videos of airstrikes targeting an alleged bakery in Syria’s Idlib Governorate sparked heavy debates on social media. The Turkish Humanitarian Relief Foundation (İHH) said it manages the bakery with funding from the Qatar Charity. This article examines what we can and cannot know so far about the airstrikes, using open source intelligence (OSINT). It establishes several certainties, but also leaves us with several questions.

According to Hüseyin Oruç, the vice president of İHH, jets of the Russian Air Force first targeted positions near the building as a warning before bombing their ‘bread bakery’ on November 29, 2015. Due to the warning there were no casualties, he said in an interview with TRT World, but claims the coordinates of the bakery had been communicated to Russia through the United Nations (UN). Another İHH offical told Al Jazeera there were at least “20 missiles […] dropped by four Russian warplanes.”

That’s the account of İHH. Let’s have a look at the videos that appeared on social media to see what we can derive from them. The first video was uploaded the YouTube account ‘Syrian Yahia’ and shows two strikes on the building. Notice that you can see the first bomb or missile at 0:16.

The second video was uploaded to YouTube by Step News Agency and seems to show the direct aftermath of the strikes.

Judging from these videos, we can be sure at least two airstrikes hit the (compound of the) facility. However, we are not able to verify whether it was the Russian Air Force. The Russian government has not yet reacted on the allegations by İHH. Where did it happen?

Using the videos and their descriptions, it is relatively easy to find the exact location of the building. The compound is located near a hamlet called al-Duwaīr (الدوير), according to Wikimapia, roughly six kilometres north-east of Sarāqib, a city in Syria’s Idlib Governorate. On satellite imagery from Google Maps as well as Bing, the building is recognisable. The first video (yellow) is filmed south of the building (red) looking north, while the second video (blue) is filmed from the west looking east.

There is no known presence of the so-called Islamic State (IS) in the Idlib Governorate, but several opposition groups are active in the region and control most of its territory.

It is not clear how much bread for how many people was produced per day. İHH has said it was ‘providing daily bread for nearly 45 thousand Syrian IDPs‘, but told Turkish state-run Anadolu Agency it served ‘65,000 loafs of bread per day’ for ‘about 40,000’ Syrians. British newspaper The Mirror quotes a number as high as 50,000, while it says the number of loafs per day is only 16,000.

It is also not clear when exactly İHH and Qatar Charity started operating a bakery in the building. İHH told the Anadolu Agency the bakery was established 16 months ago, while the Qatar Charity tweeted it was working for 18 months. What is clear is that the building – whether it was already used as a bakery or not – has been there for at least 11 years. And in those years, not much has changed in the outlook, as Google satellite imagery reveals. Satellite imagery from the building from Google reveal that not much has changed on the outside of the building for at least 11 years.

That the building had tools and machines to make bread can be established. Metallic stands in the background of two local videos (that will be discussed below) resemble a bread making stand shown in an Al Jazeera reportage on a Turkish bakery, also managed by İHH, in Reyhanlı, Turkey, around 50 kilometres away from al-Duwaīr. It is evident that there were necessary facilities to make bread present at the building.

Comparable stands in al-Duwaīr (left) and Reyhanlı (right). Both are managed by İHH.

But there is something more remarkable in the accompanying text of the Al Jazeera reportage. It reads that a İHH employee says ‘they previously shipped flour directly to bakers in Syria’ but ‘with their bakeries being regularly targeted, two years ago they decided that it would be more effective to produce the bread in Turkey and ship it to the needy.’ Al Jazeera‘s Hassan Ghani writes that the loaves of bread from Reyhanlı are sent to several parts of Syria, including Idlib.

The article was published on May 20, 2015, meaning İHH said it stopped shipping flour to Syria in May 2013. İHH and Qatar Charity claimed the operations near Sarāqib started 16-18 months ago, roughly a year after the flour shipments to Syria stopped. Based on this information, several questions arise: Did flour shipments to Sarāqib start again? Was the alleged bakery in Sarāqib obtaining their flour from somewhere else?

A few have argued hitting a bakery might be a strategy to ‘starve‘ out Syria. Another claim has been made that the bakery was or is a weapons depot in disguise (hinting towards alleged links with al-Qā’idah). An argument put forward to support this is the second explosion in the first video. It is remarkably bigger and more explosive than the first explosion. A crackling noise can be heard, alongside the sound of the jet.

Two stills from the Step News Agency video show the explosion after the second strike.

Others, including Hassan al-Mukhtar, a local reporter for Eye on Homeland, told Bellingcat that the second strike hit a diesel fuel stockpile, necessary to keep the bakery running in times of power outages. An argument to support this claim can be the following photo, tweeted by İHH, allegedly showing post-strike photos. The photo shows a machine that seems to be a diesel power generator, with (from left to right) a generator, an engine, a muffler, and radiator. This might indicate that the machine could run on (diesel) fuel that might be stored on the compound as well. 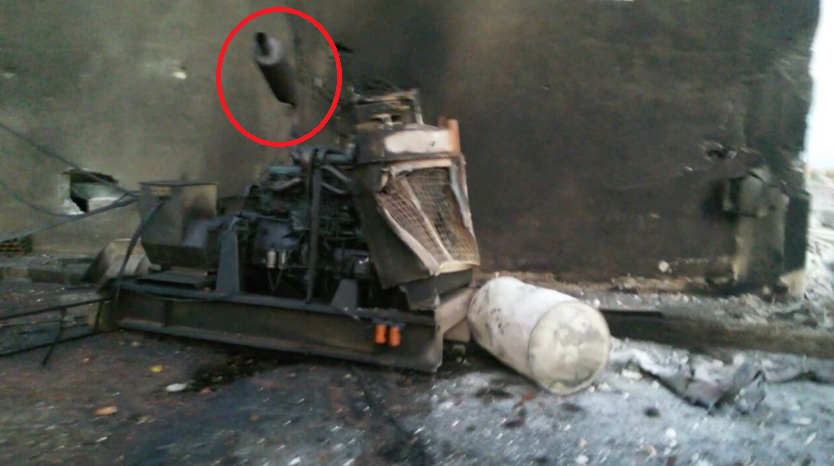 A muffler can be seen on what is allegedly a photo taken on the premises of the building after the Nov. 29 airstrikes.

However, at the moment it is not possible at this time to either verify or reject the claim that arms were stored in the building. Neither it is possible to say that (diesel) fuel was stored on the compound.

Was it the first time the building was hit by airstrikes? No.

Mustafa Özbek, an İHH official, told Al Jazeera that Sunday’s attack “was the first time any of our facilities was targeted”. This claim contradicts earlier reports from local media that suggest the bakery has been hit by airstrikes before. Let’s have a look at those reports.

Firstly, there is a reportage by Orient News, a pro-opposition Syrian media group owned by billionaire Ghassan Aboud, uploaded to YouTube on October 15, 2015. It claims that four Russian airstrikes hit a grain mill (مطحنةَ الحبوب) and the bakery (المخبزَ) on October 14, 2015, which led to the shut down of the facilities.

A comparison of stills from the Orient News reportage (Oct. 15, left) and Syrian Yahia’s video (Nov. 29 right). The damage of earlier strikes is clearly visible in the Nov. 29 video.

Secondly, a reportage for Eye on Homeland, published on November 22, 2015, shows the same building again and gives it a name as well: bakery al-Wazīr (مطحنة الوزير). The video starts with a shot of a sign that refers to both İHH and Qatar. The date on which the strikes occurred is not mentioned. The shots at 0:47-0:53 and 0:57-1:19 clearly show that it is the same building as in the previous videos (seven windows horizontally, six windows vertically). Lastly, Eye on Homeland also published several pictures on Facebook on October 20, 2015. They show again the same building and claimed the bakery stopped working after it was hit by Russian planes (الطيران الروسي). 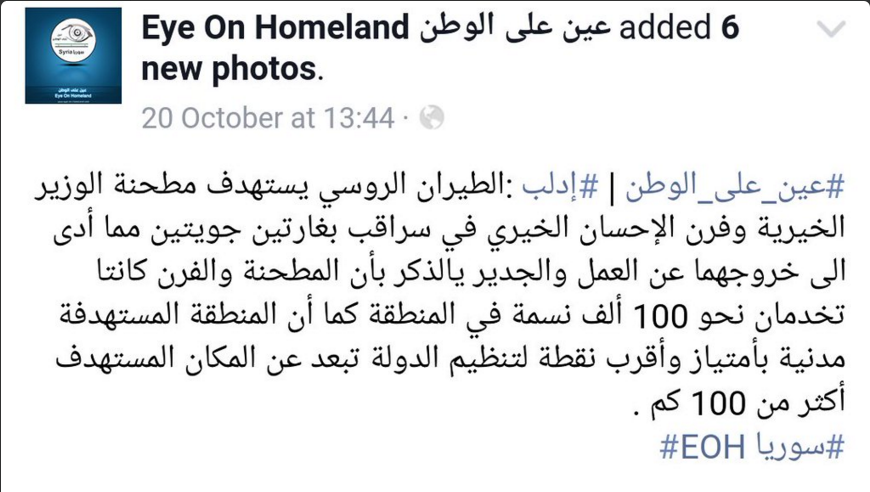 Screenshot of the accompanying text with 6 photos , claiming the bakery was hit by airstrikes and stopped operating.

A comparison between the footage published on November 22 and the photos published by İHH after the November 29 strikes, shows that the lower building has been damaged severely in the latest strikes. 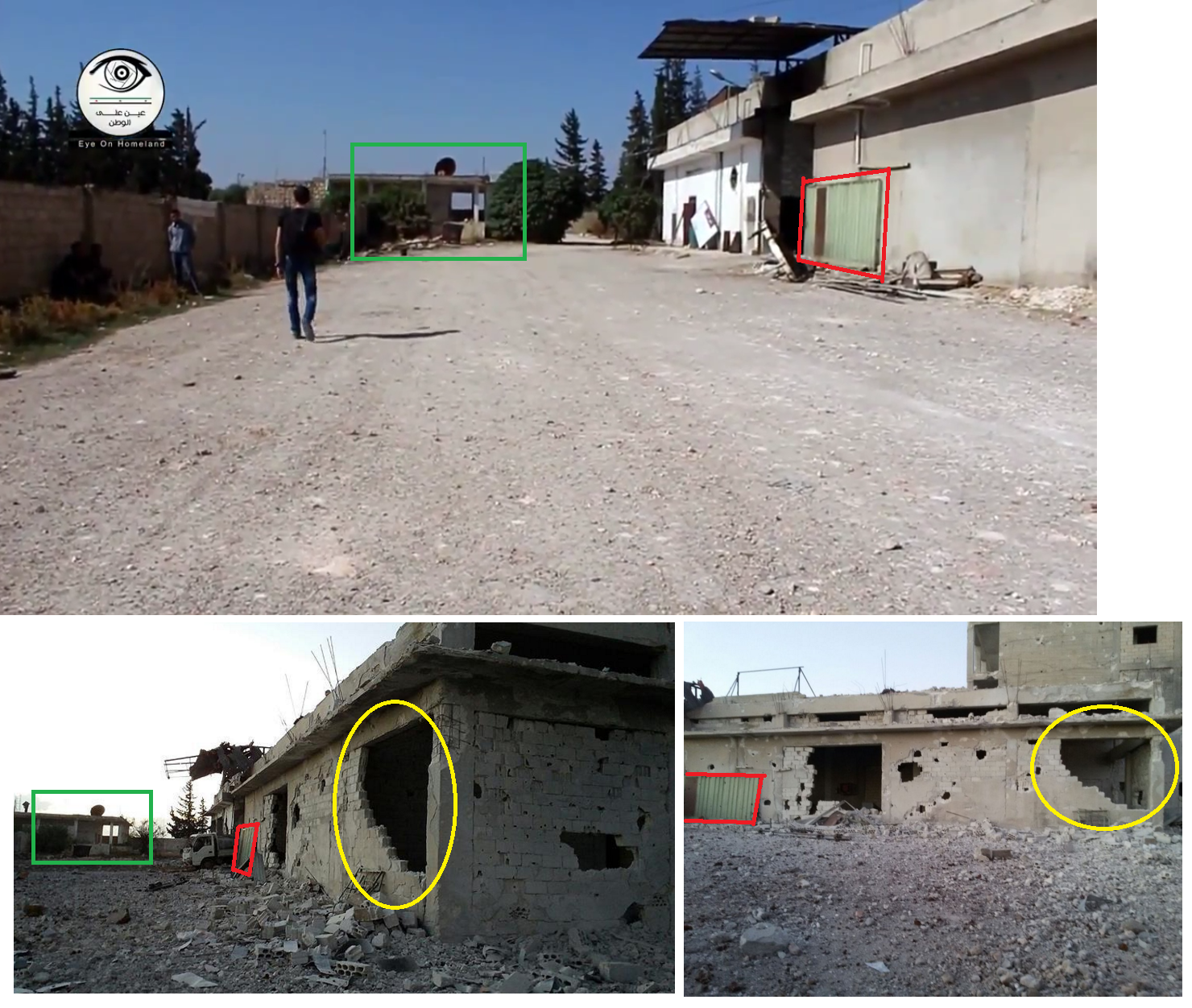 The upper photo shows a still from the Nov. 22 footage, the two lower photos were published on Nov. 30 by İHH.

Using open source information, this is what I have found so far and can contribute to the discussion. Any reader is more than welcome to contribute to this case in the comments.