Bellingcat began geolocating and independently verifying videos published by the Russian Ministry of Defense (MoD) after initial reports from the ground indicated that Russian airstrikes destroyed positions held by the Free Syrian Army and other groups rather than the Islamic State (or ISIS). Bellingcat has geolocated, verified, and visualized each airstrike published by the Russian MoD on its official YouTube channel as of 25 October. The outcome of our work is unequivocal: the overwhelming majority of Russian airstrikes have targeted positions held by non-ISIS rebel groups posing a more immediate threat to the Syrian regime and its head, Bashar al-Assad. In contrast, ISIS strongholds have rarely been attacked: out of 60 strikes recorded on video, only one has been confirmed to be both at the location indicated by the MoD and against ISIS; 14 other strikes said to target ISIS were, indeed, geolocated to the claimed locations, but none of those areas are known to be under ISIS control.

The Russian Federation launched an air campaign on 30 September 2015, allegedly targeting Islamic State (or ISIS) positions in Syria. The Russian Ministry of Defense (MoD) has been releasing selected videos on its YouTube channel ever since. Bellingcat began geolocating and independently verifying videos published by the Russian MoD after initial reports from the ground indicated that Russian airstrikes have instead destroyed positions held by the Free Syrian Army and other groups rather than ISIS.

Bellingcat has geolocated, verified, and visualised each airstrike published by the Russian MoD on its official YouTube channel as of 25 October. The outcome of our work is unequivocal: the overwhelming majority of Russian airstrikes have targeted positions held by non-ISIS rebel groups posing a more immediate threat to the Syrian regime and its head, Bashar al-Assad. In contrast, ISIS strongholds have rarely been attacked. The methodology and results of the investigation are laid out below.

We noticed that, for many videos, the Russian MoD adds a description in Russian before the video of the strike itself begins. A longer, more in-depth description is also appended to each upload, along with the title of the video. For the verification process, each video was uploaded to Bellingcat’s Checkdesk verification project. We Google-translated the description and pasted the original one in Russian alongside to keep track of the information in an independently managed online space.

Once this preliminary step is completed, the verification process is turned “on” which enables crowdsourced public discussion and proof-gathering. For each video, a series of details are collected and verified; these are:

From these details and crowdsourced geolocation efforts, the actual target of the strike was established and an error was defined. The latter describes either a mismatch between the claimed and the actual location of the attack or the absence/presence of ISIS in the bombed area or mention of ISIS in title/description of the video.

For each of the videos we then sought to answer the following questions: Did the Russian airstrike target the location it claims it did? And is there any proven ISIS presence in the bombed area?

Our investigation shows the following: 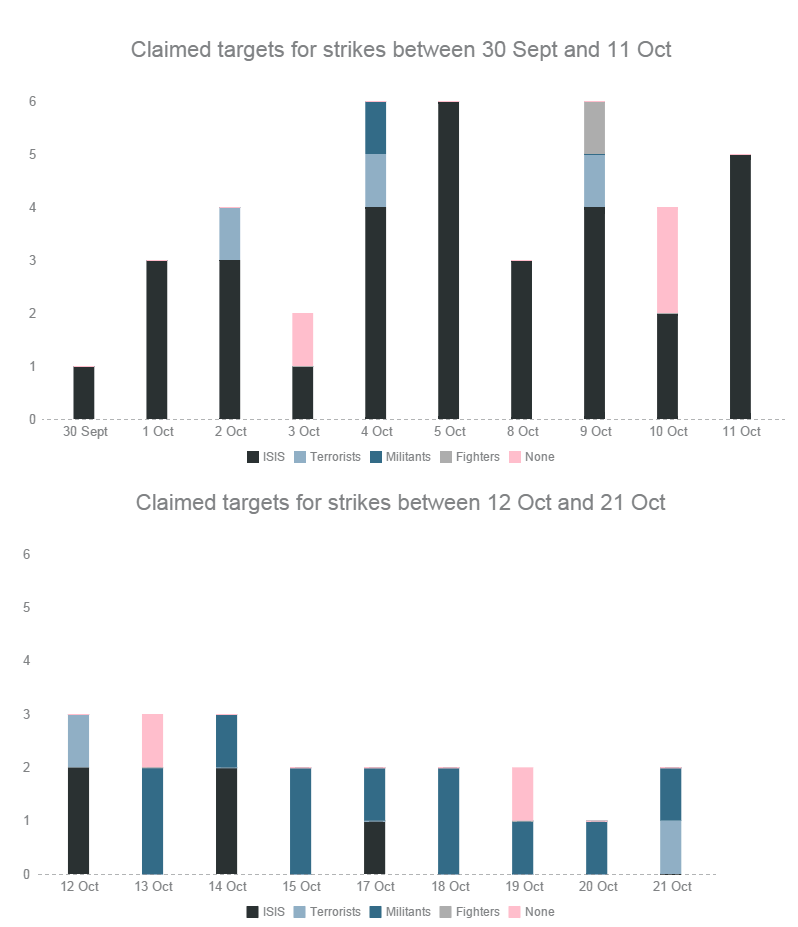 Two observations emerge from the available data. The first one is that, for the period 30 September – 11 October, a higher number of videos were released compared to the period 12 October – 21 October. The second observation is that gaps in the video releases exist. This is the reason why the some days are not specified in the above charts.

The trend showcased in these bar charts is, however, clear: the initial airstrike videos presented a narrative where the target was ISIS; this appears to have evolved in the past two weeks which saw videos being released as targeting unspecified “militants”. 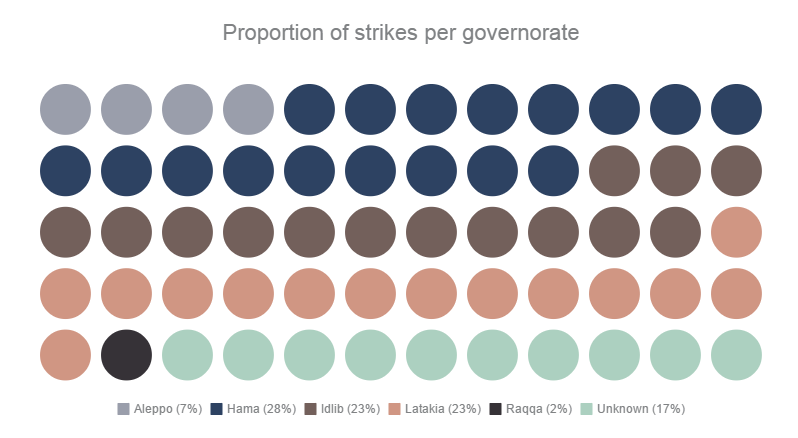 Our investigation highlights that the overwhelming majority of locations hit by Russian airstrikes is outside of areas known to be under ISIS control. The chart above shows that only one attack has been confirmed to target locations close to Raqqa, the ‘capital’ of the Islamic State. A number of videos have been marked as “unknown” as it has not been possible to geolocate the location shown in the videos.

Not Really Targeting ISIS: A Confirmation by the Defense Ministry

Russian officials themselves have provided clear proof regarding the actual targets. A detailed and richly illustrated map circulated in the RuNet indicates that the majority of Russian airstrikes have targeted Idlib and Hama governorates, labeled by the MoD as “areas controlled by other [i.e., non-ISIS] illegal armed groups.” The map first appeared in a high-resolution JPG format on the VK wall of the “Russian Federation Armed Forces” account, timestamped at 18 October 2015, 10:16 AM. The caption indicates that the map was presented on 17 October at a briefing about the situation in Syria.

The person who provided the briefing is the commander of the main operating unit at the Russian Air Force headquarters, Colonel General Andrey Kartapolov. Kartapolov has been pictured by the MoD on its Twitter account holding the seemingly identical map as a paper printout to showcase the locations of the “394 combat sorties”:

The tweet is timestamped 16 October 15:33. The post on MoD’s Facebook account, timestamped 22 October 17:40, also shows Kartapolov providing a briefing about the most recent strikes against the backdrop of what looks to be the same map. A better view of the colonel general in front of the map and a source for MoD’s social media images can be found at the MoD’s website. It has been possible to mark all the geolocated airstrike videos on the map, showing where the airstrikes hit according to the Russian MoD’s own map and videos: 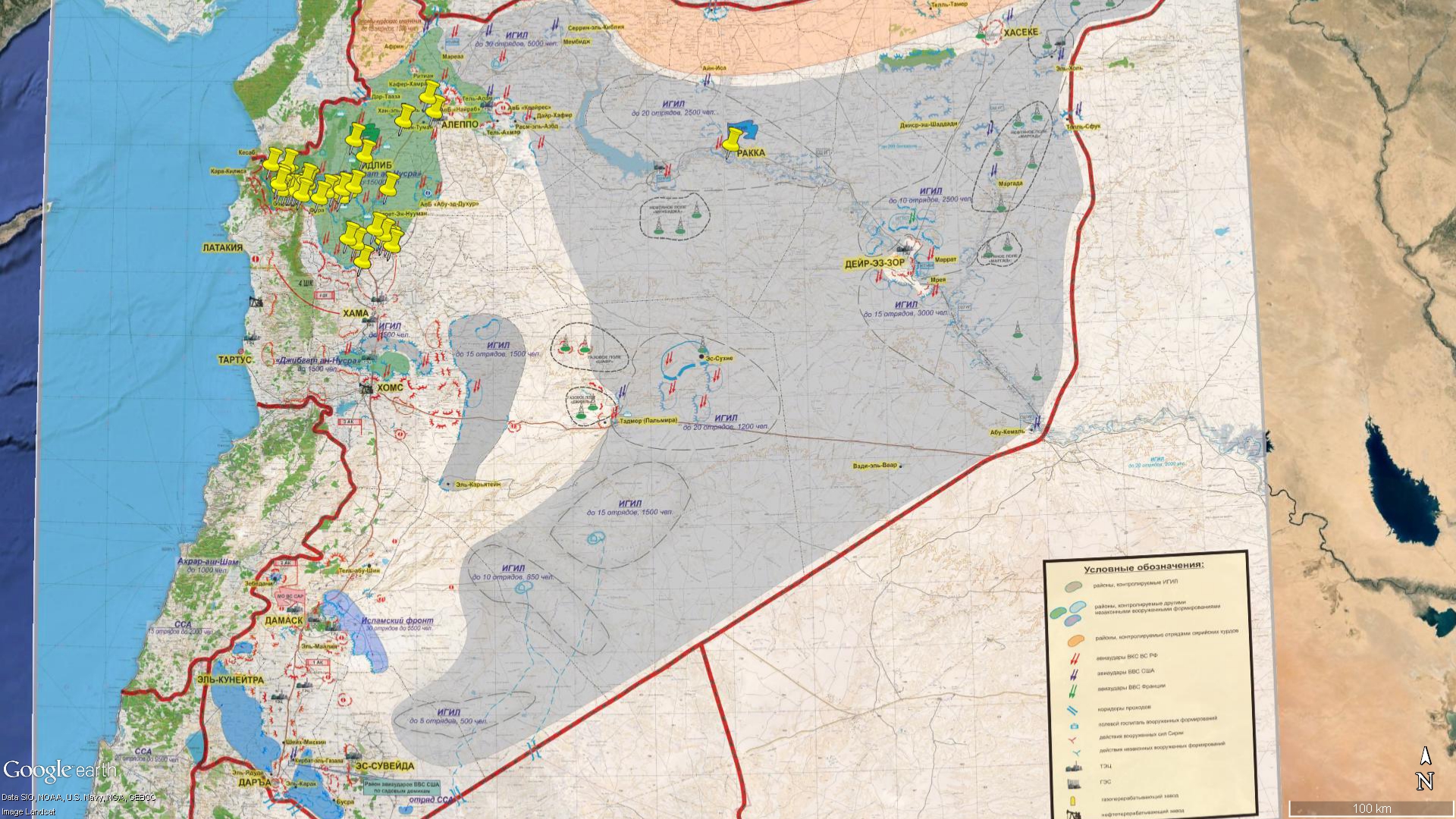 Based upon the evidence provided by the Russian Defence Ministry itself, it is clear that the bulk of the airstrikes undertaken by the Russian Air Force have consistently targeted areas where non-ISIS, anti-regime armed groups operate.

Thanks to all of those who contributed on Bellingcat’s Checkdesk.