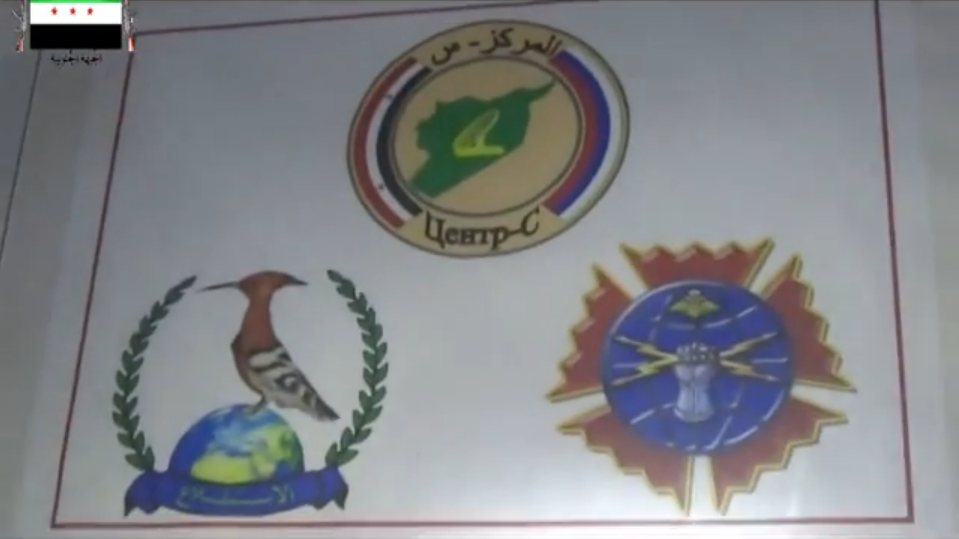 On the 5th of October 2014, the Free Syrian Army captured the Центр С – المركز س – Center S SIGINT (Signals Intelligence) facility (logo on top) jointly operated by the Russian Osnaz GRU radio electronic intelligence agency (logo on the right) and one of the Syrian Intelligence Agencies (logo on the left). Situated near Al Hara, the facility was of vital importance for the Assad regime as it was responsible for recording and decrypting radio communications from every rebel group operating inside Syria, making it likely the Russian-gathered information at this facility was at least partially responsible for the series of killings of rebel leaders by airstrikes.

Translation from 3:08; ”A directive issued by the surveillance office on May 31 to eavesdrop and record all radio communications of the terrorist groups, directive signed by brigadier-general Nazir Fuddah, commander of the first center”

The facility was recently upgraded and expanded by Russia to provide Syria and Iran with situational awareness of the Middle East. After the upgrade, which took from January to mid-February, it reportedly covered the whole of Israel and Jordan and a large part of Saudi Arabia.[1] According to the report, the upgrade was a reaction to Iranian concern of the facility being too much focused on the Syrian Civil War, neglecting espionage on Israel. New equipment and additional personnel was thus added to the base. As only static and worn out looking sensors were captured [2] [3], the more modern equipment and Russian personnel were undoubtedly evecuated days or weeks before.

It is unknown if the facility is named Center S (‘S’ for Syria or special), it is known there’s at least one other Russian-Syrian SIGINT facility around, named Center S-2.  A badge commemorating the ten year anniversary of this other spy facility can be seen below. 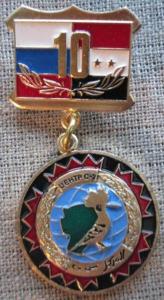 The Russian operator of Center S was the Osnaz GRU, responsible for radio electronic intelligence within Russia’s Armed Forces. Although not much is known about this unit, its logos can be seen below. “Части особого назначения” – Osnaz GRU and “Военная радиоэлектронная разведка” – Military Radio Electronic Intelligence.

Various photos on the wall inside the captured facility once again emphasise the Russian involvement in the Middle East, showing even a map of Israeli Armed Forces bases and units. Other photos detail Russian personnel working at and running the center, as well as highlight a visit by Kudelina L.K., Counselor to the Minister of Defence of Russian Federation. 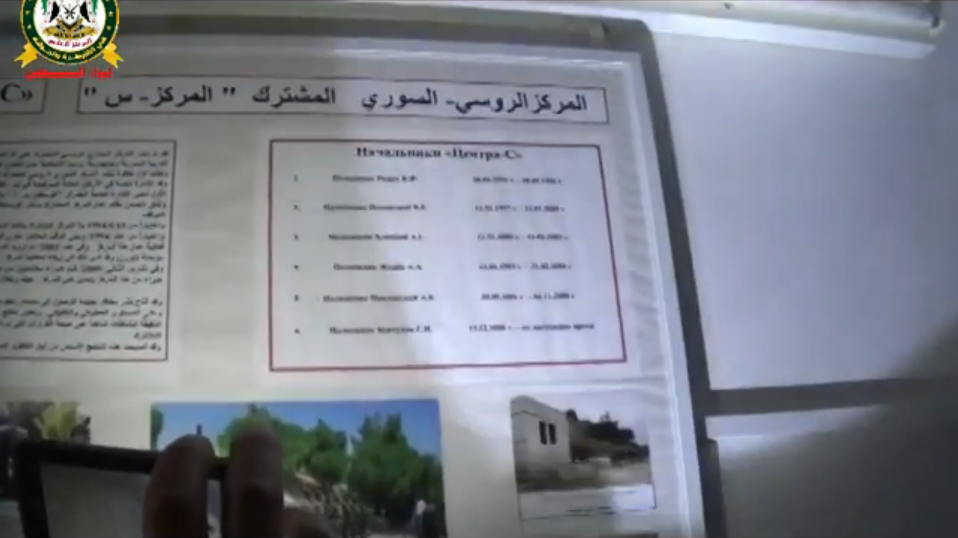 ”Начальники “Центра-С” – Chiefs of Center S. The six lines beneath reveal the ranks of the Russian chiefs, their names and dates when they commanded the Center. All six seem to have rank of Полковник – ‘Colonel’. Surnames are not readable.

”Рабочий визит начальника ГУ МВС ВС РФ” – Visit by the chief of the Main Directorate of International Military Cooperation of the Armed Forces of Russian Federation.

Special thanks to PFC_Joker and Mark Anthony.