It started in November 2016. A collective of self-styled hackers and internet trolls calling themselves “214” created a closed Facebook group focusing on BDSM and kink. The first posts in the group included photographs of sex toys along with some memes, and eventually the group began to expand as it gained popularity. Many began to join the closed group and posted pictures of themselves with their name, age, and location, hoping to meet others with shared interests. Some representative examples include a nice-looking guy named James, a self-described dom who likes anime and was looking for a sub. Another member of the group was Joe, a fifty-year-old self-described “daddy dom.” Women posted as well in this quiet and well-mannered community of people looking to connect. 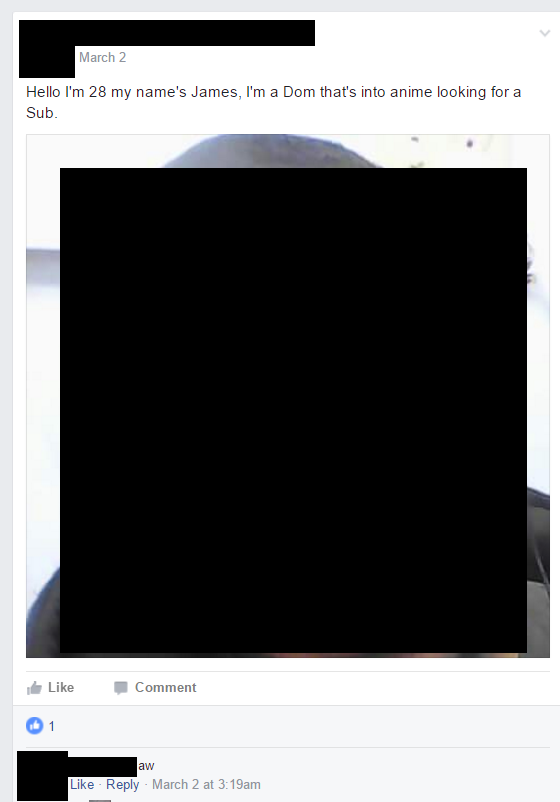 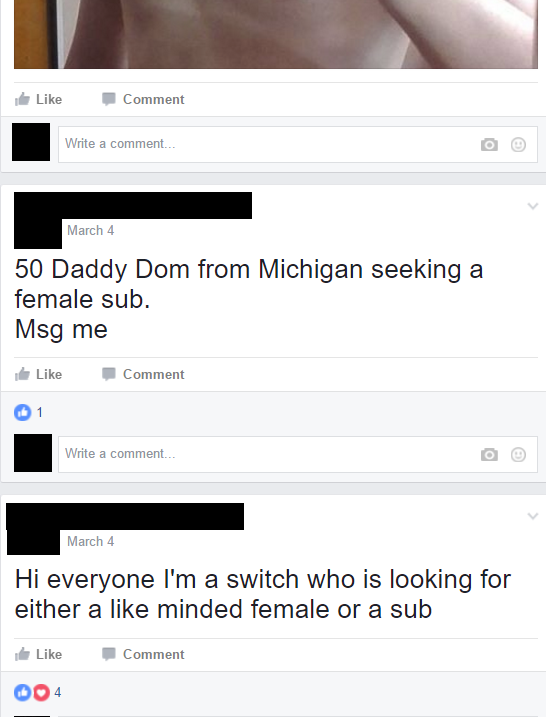 On March 4 of this year, Thomas Brennan, a veteran Marine who founded the military journalism site War Horse, ran a story with investigative reporting publication Reveal that garnered international attention. This story published names and detailed the work of a 30,000-member Facebook group called Marines United (MU). The group’s membership consisted almost exclusively of men, most of which fell into a few distinct categories: US Marines, Navy Corpsmen, and British Royal Marines. The group was like many other groups, but there was something that filled the pages of the group that brought tremendous scrutiny – pictures of naked women, the vast majority of whom did not consent to these pictures being shared. There were countless of these pictures, with women of every shape, size, and ethnicity. While many of these pictures were of Marines, there were also girlfriends and ex-girlfriends, wives and ex-wives, random girls near base, and a lot of one night stands.

The majority of these pictures were revenge porn — explicit photographs or videos of a former partner distributed online, often after a break-up with the intention of humiliating them. Pictures and videos of women in the military along with those of girlfriends and wives of military personnel were one of the common themes of MU. There were also pictures of women taken secretly or without their consent, pictures of girls stolen from hard drives, and in some rarer cases, women who snapped and shared pictures of themselves to the group purposefully. Members of the group viewed and commented on these pictures, asking for more information about the women: where they lived, where worked, what rank they were, and to which unit they were assigned. They also discussed sexually assaulting the women in the pictures, and what they would do to them if they found them in real life.

With Brennan and his Reveal compatriots maneuvering on MU, the whole debacle surrounding the exploitative Facebook group became a media frenzy. Facebook shut down the MU group and many breathed a sigh of relief, thinking that this evil group was gone and America was now safe from sexually deviant Marines online. But things are rarely so simple, and new groups were formed in the shadow of MU, sprouting up on Facebook in attempts to recreate MU. One by one, these groups sprouted up and were in turn uprooted by Facebook, but the social network was not able to work as fast as the displaced MU members. A confidential informant within these groups stated that they kept getting invites to new groups, but by the time they were able to get home from work and join the groups, Facebook had already shut them down. Undeterred, the men of the defunct (but not forgotten) MU group continued creating new groups to share their ill-gotten pictures across Facebook and beyond. Like the hydra, for each group that was cut down, two more would grow in its place. Who was and is this Mike Sican? To the discerning eye it would appear that his name is a play on the word “Mexican,” making his identity even harder to discern. Really, it is unclear if he really is a man at all — one person jokingly called him a hacker, and he uses a child as his profile picture. “In case anybody is wondering the girls don’t care if their pictures were taken. They know the only purpose they serve is a pin cushion for the guys. The media is trying to get people in trouble and act like marines showing pictures is wrong. All I’ve got to say is fuck em, the marines can take pictures of the pin cushions and share them. Get over it.” 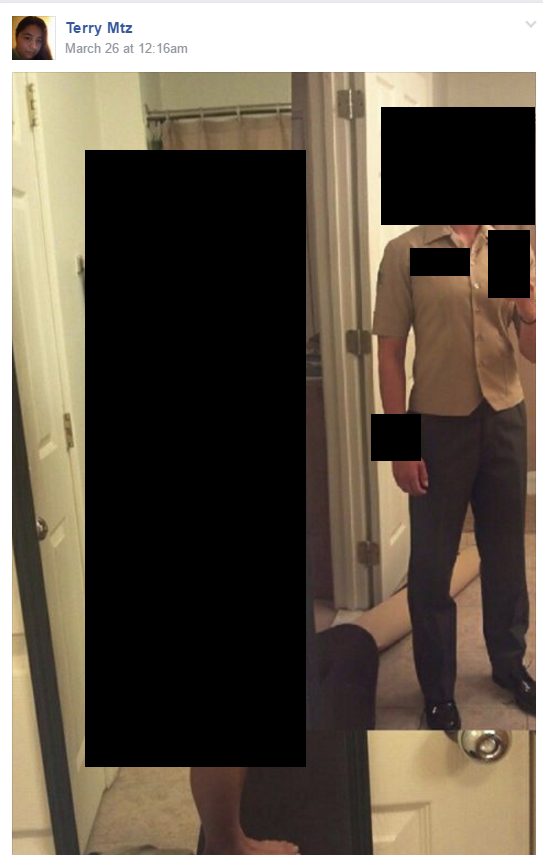 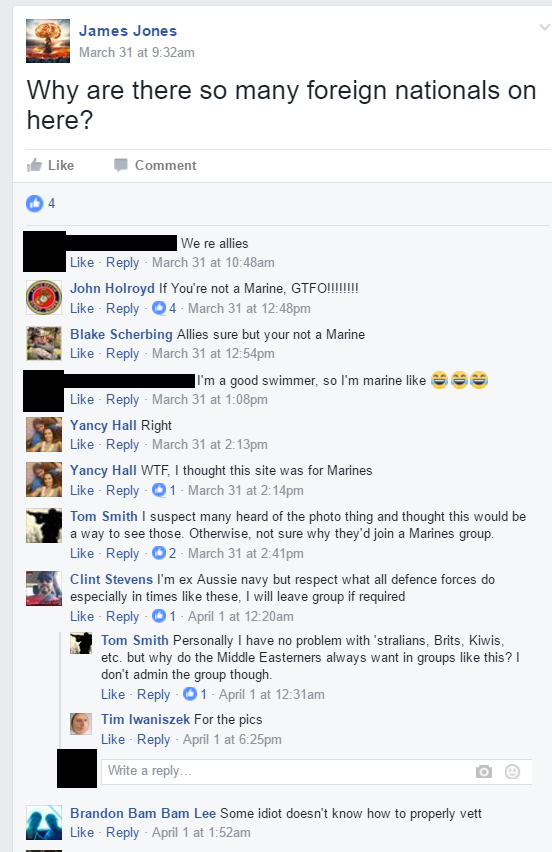 “Nope. I can’t remember what it used to be. Honestly, we have literally hundreds of forums, pages, and web sites. For us it’s all churn. Flip groups, or pages, or web sites to align with social memes.”

Camelot Global discovered the group and began collecting information. James LaPorta, a Marine veteran and journalist for the Daily Beast, had already joined the MU214 group and was gathering information on the group’s activity. On March 24th, he was tagged in a post calling him out:

“James Laporta, come at me, I got 30k worth of pics and vids if you wanna snitch on that. The old saying, snitches get stitches. This is a brother hood, so don’t fuck with it.”

Thomas Brennan, the War Horse journalist who worked with Reveal on the investigation into Marines United, was at one point a member of MU214 as well. On March 19th he was asked, “So what is the game plan? what are you aiming to do?” Brennan replied, “Continue to protect those who can’t protect themselves.” On March 25th a post was made on MU214, bragging that the admins had uncovered an “investigative journalist in our midst…” They banned the individual. The post did not identify the specific journalist, but it could have been Brennan. However, at the time of the post, he was no longer a member of the group. Regardless of this ban, people who had infiltrated the MU214 group collected information both on the Facebook group and in other locations, where people would actively share information and attempt to identify and locate the women in photographs. The pictures were being sold on a site called AlphaBay, the largest online darknet market on the Tor network. Over the past few years, there have been rumblings that AlphaBay has close ties with Russian organized crime groups, and by extension, potential links to organs of the Russian security services, as detailed by CyberScoop in a recent investigation. Recently, after reviewing the evidence I helped collect on these photographs being sold on AlphaBay, Military Times raised the possibility of the explicit photographs being used as blackmail against the victims. Due to the professions of many of the victims in the photographs, many of these active duty women have security clearance, giving them access to sensitive information–raising the possibility for “a legitimate national security threat,” as stated by a criminology professor quoted by Military Times.

Since the April 6 article published by the Military Times on MU214 and their potential connection to organized crime, many who have worked as sources and collected information about MU214 and other groups have been targeted with death threats–including the author of this investigation. 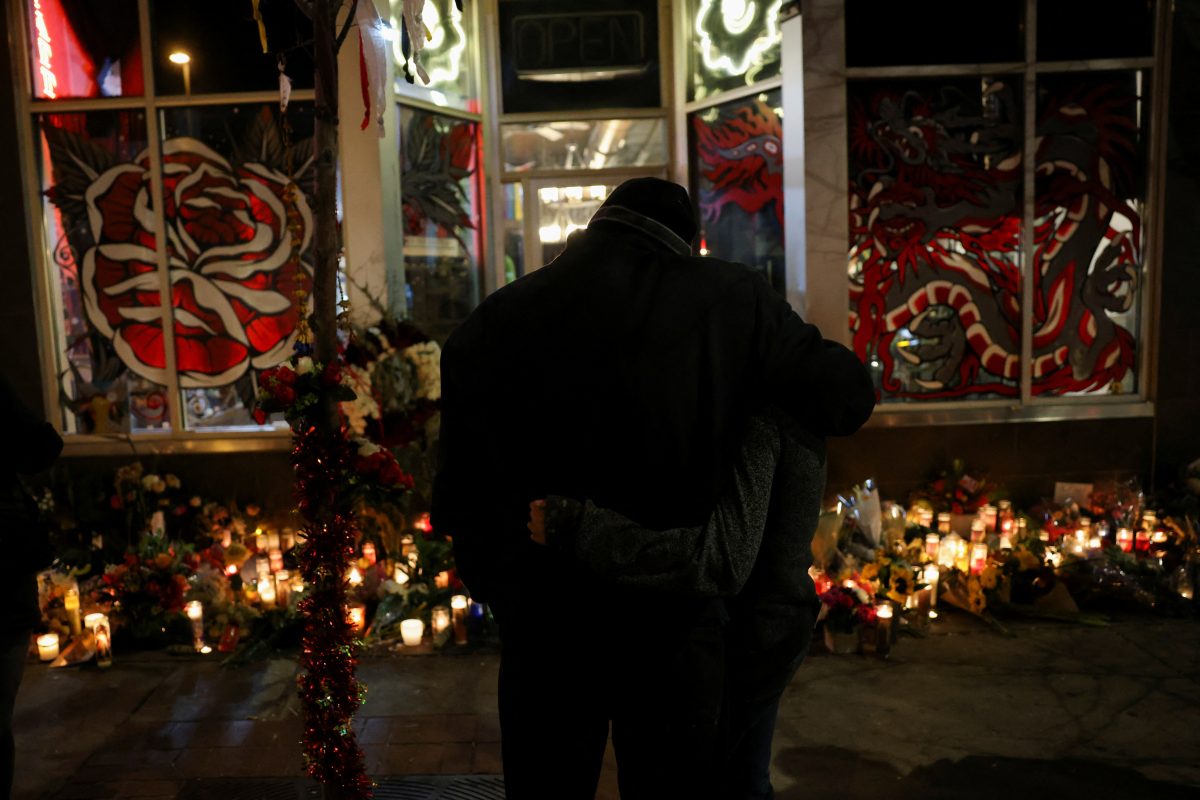 How the Insurgent and MAGA Right are Being Welded Together on the Streets of Washington D.C.